Hitoshi Shinso is one of the lesser known characters of Kohei Horikoshi’s My Hero Academia manga, but while he might be lesser known, his story is still quite impactful.

Shinso was first introduced in Chapter 23 as part of the U.A. Sports Festival Arc, where he reveals how unimpressed he is by Bakugo’s arrogant attitude.

Not only does he reveal he’s unimpressed by students in the Hero course, but he reveals he’s still stuck in General Studies, as he didn’t make the cut for the Hero Course. 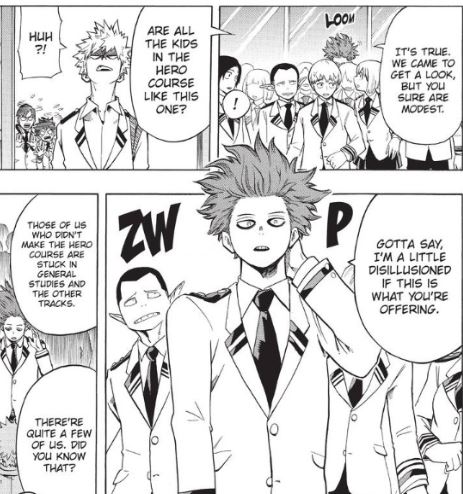 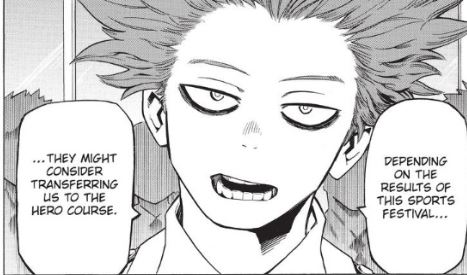 This attitude leads Shinso to declare war on the students of Class 1-A, with the purple-haired UA student declaring that the Sports Festival will “be the perfect chance to knock you off your pedestals.” 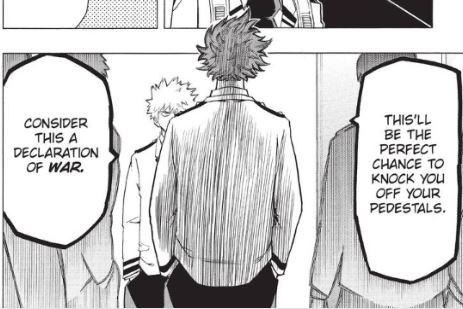 During the first event of the Sports Festival, the Obstacle Course Race, Shinso is seen being carried by other General Studies students as he observes the quirks of his opponents from Class 1-A.

He would eventually finish in 27th place. 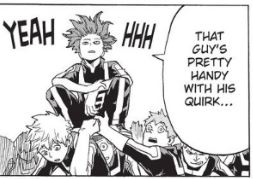 In the festival’s second event,  the Cavalry Battle, Shinso teams up with his classmates Nirengeki Shoda, Yuga Aoyama and Mashirao Ojiro, and despite being at the bottom for most of the compeition, end up taking a surprise third-place finish.

Shorlty before the third and final competition of the Sports Festival, a series of one-on-one battles in round of 16 tournament format, members of Shinso’s Cavalry Battle surprisingly begin to drop out of the tournament after revealing that they have no knowledge of the previous competition.

Ojiro explains, “The Cavalry Battle… I have no memories of anything that happened up until the tail end.” He even hints that it might be due to Shinso’s quirk and speculates that “it’s probably his quirk that did it…” 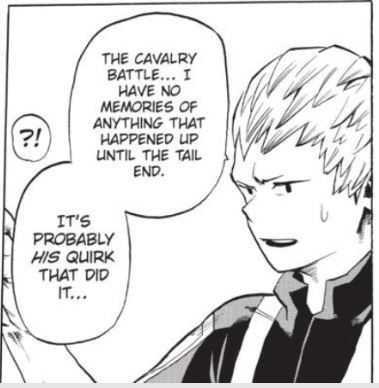 Class B’s Nirengeki Shoda similarly drops out shortly after Ojiro, echoing her teammates sentiments and stating “I can’t remember anything either. I withdraw too!”

However, Aoyama remains in the competition.

In the first round of the tournament, Shinso faces off against Deku. 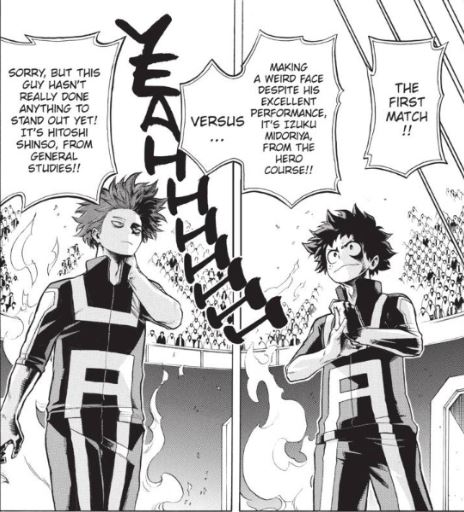 It’s in this battle where we discover Shinso’s quirk and just how formidable of a foe he can be.

After goading Deku to attack him, Shinso uses his still unidentified quirk to freeze Deku in place. 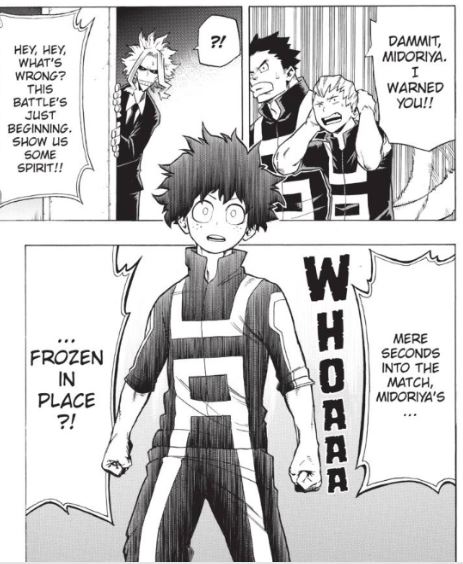 It’s then revealed that Shinso’s quirk is called Brainwashing, and it allows him to instantly brainwash anyone who verbally responds to him. The brainwashing allows him to command anyone under his influence to do as he says.

When first introduced, the main drawback of Brainwashing is that Shinso has to will the brainwashing for it to work. 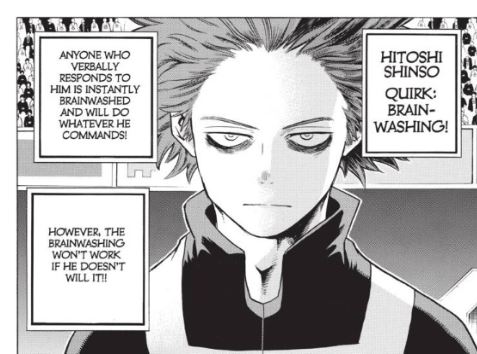 However, Ojiro also reveals that coming into physical contact with someone else can also make the effects of the brainwashing wear off. 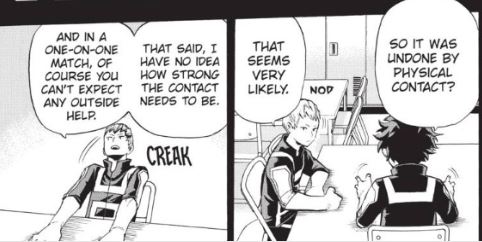 Not only does the brainwashing effect wear off from physical contact, but Deku soon discovers he is able to brush off Brainwashing through the powers of One For All.

In the midst of the his battle against Shinso, Deku unsurprisingly falls under the effects of Brainwashing and is ordered by Shinso to simply disqualify himself by walking out of the arena’s boundaries.

However, thanks to Deku’s connection to past wielders of the quirk, the spirits of previous users of One For All appear before him, clearing his head from Shinso’s influence and allowing him to create a powerful shockwave, which ultimately pushes back Shinso whilst simultaneously helping Deku remain in the competition. 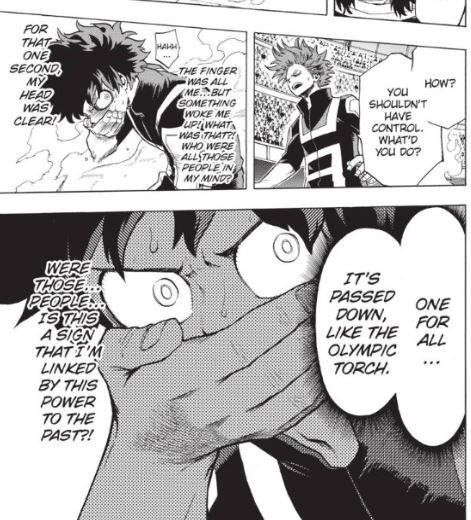 With Deku no longer affected by Shinso’s Brainwashing quirk, he easily tosses Shinso out of the ring, but not before Shinso reveals his jealousy of the students in the Hero Course and their quirks.

He tells Deku, “I’m jealous though. Just moving that finger must mean you’re the real deal.” 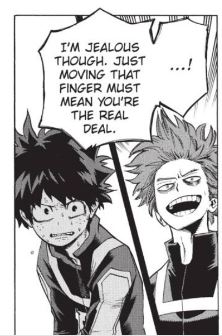 “Thanks to my quirk’s nature, I couldn’t enter the golden gates! You wouldn’t get that you’re naturally blessed,” he continued.

Shinso then added, “You peopItle… born with your awesome quirks… getting to follow all your dreams!!” 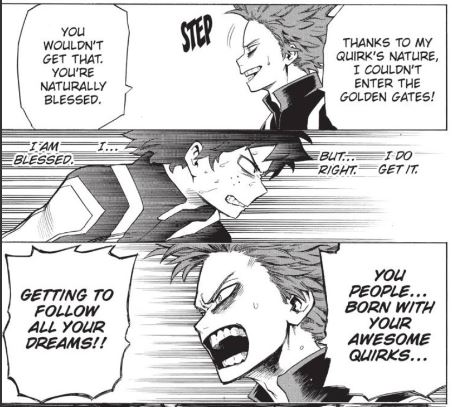 Despite being defeated, Shinso is encouraged in his journey by his General Studies classmates, as well as a number of Pro Heroes, and vows to become a greater hero than everyone else.

He exclaims, “Maybe I failed this time, but…I’m not giving up. I’ll show them I’ve got what it takes to make the Hero Course, and I’ll become a greater hero than all of you.” 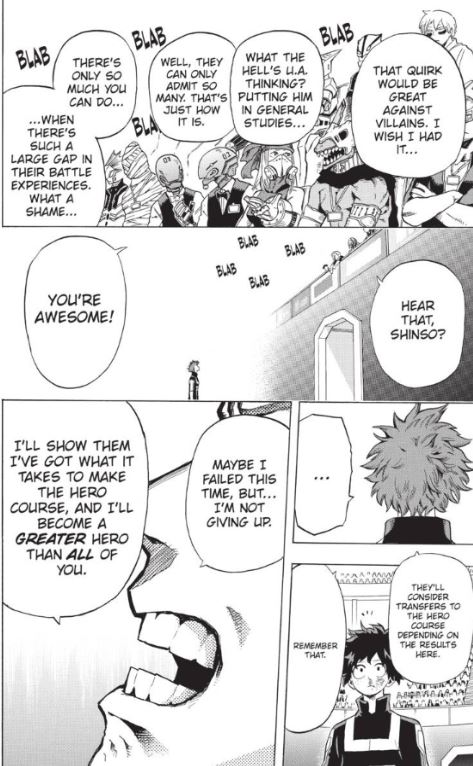 Following the Sports Festival Arc, Shinso’s character is only seen in a few cameo moments before making a big splash again in the Joint Training Arc.

In Chapter 194, it’s revealed that Class 1-A and Class 1-B will participate in a Joint Battle Training exercise. However, the two classes are shocked to find that a single member of General Studies’ Class C, Shinso, will be joining them with the hope of transferring into the Hero Course. 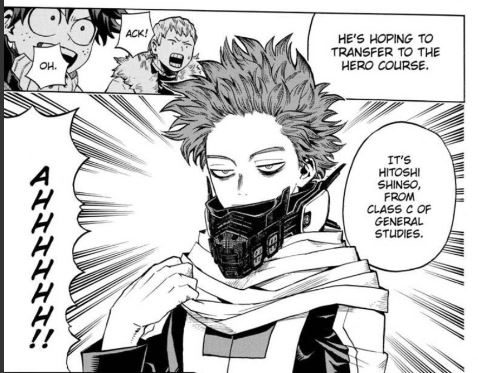 In a further shock to their understanding of the training exercise, the students are then informed that Shinso will be participating in two of the joint battle exercises as a member of both Class 1-A’s and Class 1-B’s teams.

As for his Class 1-B team, he is assigned to a team featuring Neito Monoma, Nirengeki Shoda, Yui Kodai, and Reiko Yanagi.

When partnered with Class 1-A, Shinso a detailed explanation of his quirk’s strengths and weaknesses.

“First, I have to focus my attention on the target and think, ‘this is who I’m going to brainwash,'” explains Shinso. “Once they respond, the brainwashing takes effect, and they automatically follow my commands. A strong physical blow will break my hold, but even that depends on how I initially take control. Brainwashing multiple targets at once is probably impossible, though I haven’t tried it. It’d split my focus too much.” 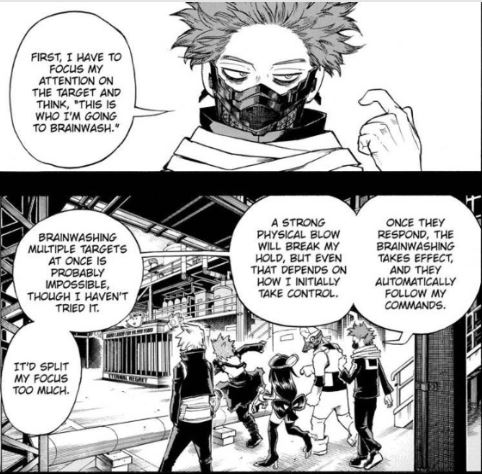 He further noted that he can’t command his targets to speak or use their own brain.

Shinso also explains that he can give direct commands, but he is unable to “make them draw on their own knowledge.”

As for his new look, Shinso explains that his mask can act “kinda like an extra set of vocal chords, my persona cords mask acts like a modulator.”

He elaborated, “Since my quirk’s effect doesn’t work if I speak into a mic or megaphone… all these little plates shift around and resonate to modify how my actual voice sounds when it projects…” 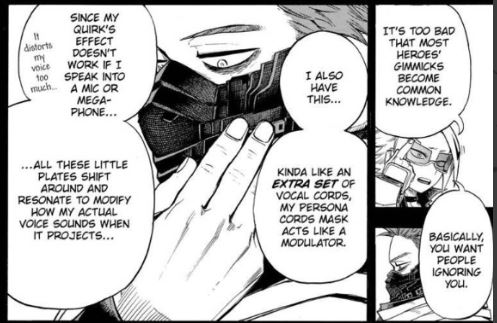 While he notes he can’t command his targets to speak, one of his Super Moves, Persona Chords, does allow him to mimic the voice patterns of his foe.

However, before he could restrain Kosei, the Class 1-B student traps him in an Air Prison and smacks Jurota, ending the brainwashing effect on him. 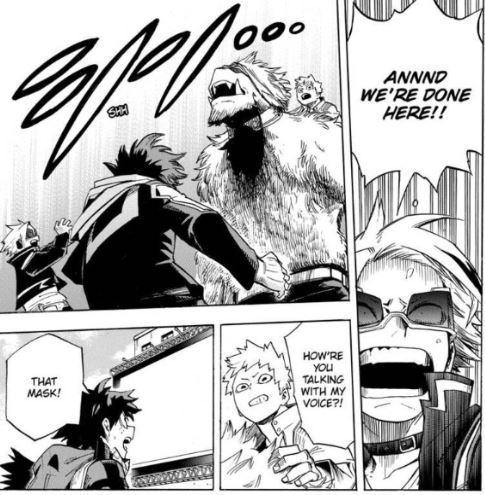 Shinso would later replicate this Super Move as the rest of his Class 1-A team take down their Class 1-B opponents, where he would mimic the voice of Hiryu Rin, resulting in Ibara Shiozaki ofering a response and falling victim to Shinso’s brainwashing. 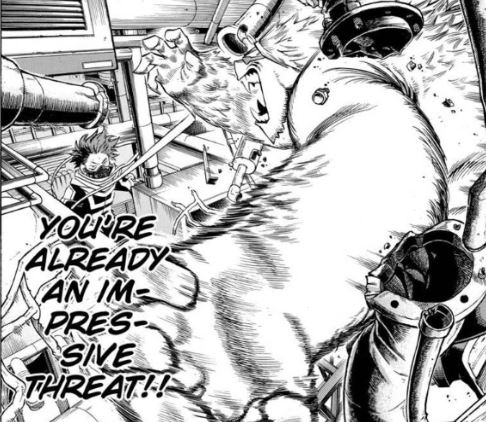 With Shiozaki brainwashed, Jurota tries to hunt down Shinso, believing him to be the prime threat towards the three students remaining on Class 1-A’s team. However, he underestimates Asui, who not only ensures that Rin can not break Shinso’s brainwashing on Shiozaki, but is able to take down both Rin and himself as Shinso fends off the giant beast with his Binding Cloth.

With all of Class 1-B’s students detained, Shinso and his Class 1-A teammates claim victory. 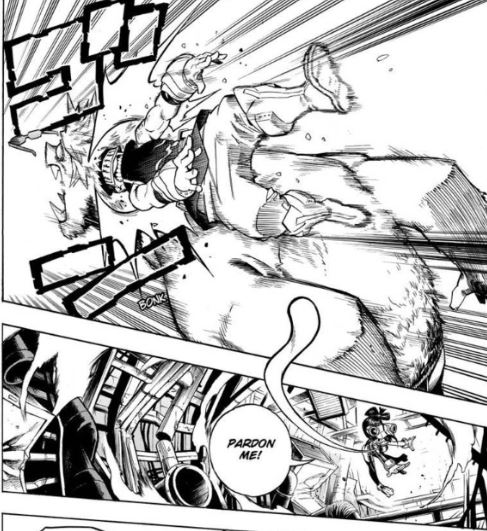 After a couple of other battles, Shinso returns to face off against Class 1-A’s team of Deku, Uraraka, Mineta, and Mina Ashido.

He takes the lead in strategizing how to defeat Deku’s team, suggesting they prioritize eliminating Deku. He even suggests teaming up with Monoma in order to take Deku down. 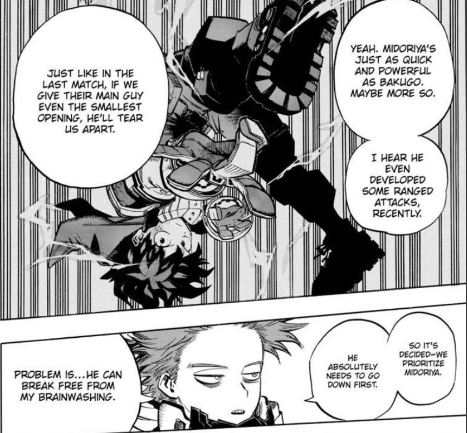 While Monoma and Shinso attempt to take down Deku, the green-haired hero loses control of One For All, resulting in black tendrils extending from his body and pulling him in the direction of Shinso’s hiding spot.

With One For All out of control, Deku ignores Shinso’s quirk and tells him to flee. 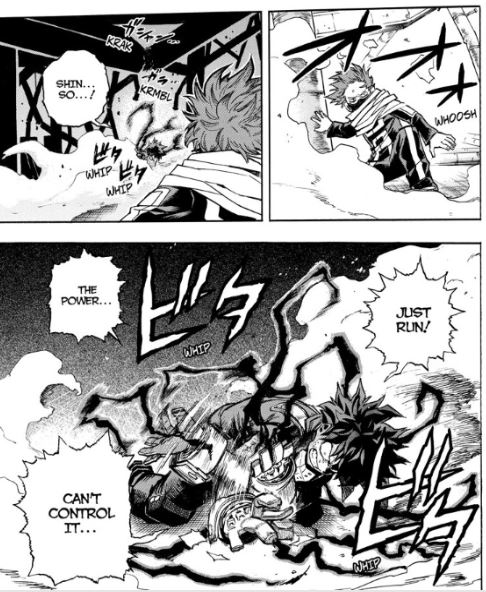 However, in an attempt to calm Deku down, Uraraka intervenes, forcing him to float, and then tells Shinsu to use his quirk against Deku. The General Studies student complies and challenges Deku to a duel, to which the Class 1-A student accepts. 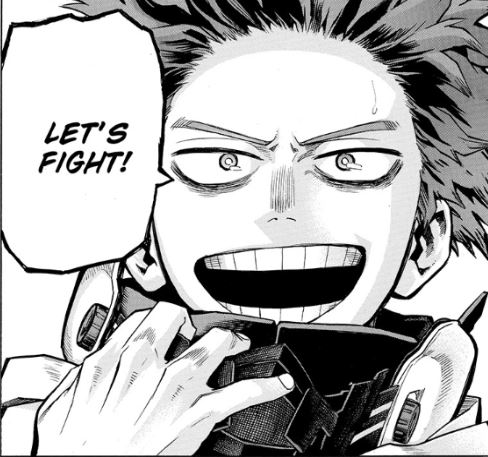 As during the Sports Festival, Shinso’s Brainwashing quirk triggers a communication between Deku and those who wielded One For All before him.

The communication is brief, and eventually interrupted when Uraraka breaks Shinso’s brainwashing. But the training battle between Class 1-A and Class 1-B is far from over.

Izuku plots with Uraraka to take down Shinso. He sees his chance when Monoma’s quirk draws a blank and he’s pinned down by Uraraka. When Shinso attempts to help him, that’s when Midoriya strikes. 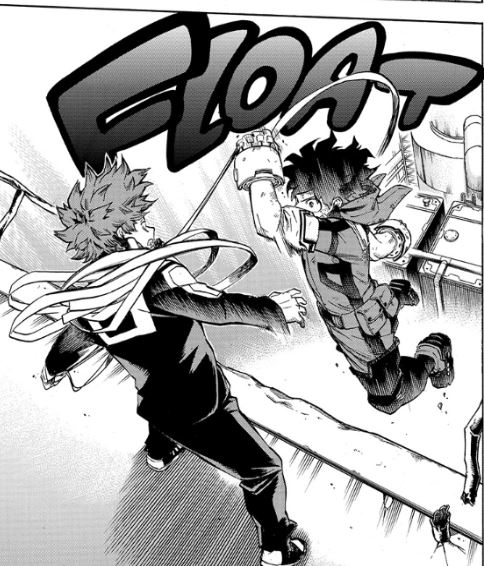 During this battle, Shinso has a flashback to when Shota Aizawa trained him with his Binding Cloth. 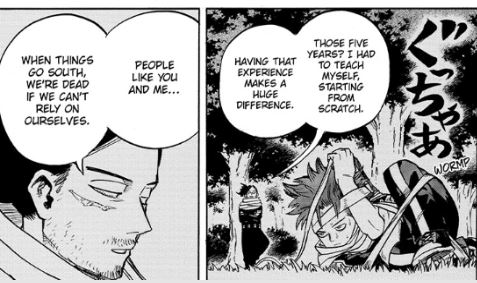 This training is then put to good use, as he is able to surprise Midoriya using the Binding Cloth and uses it to bring a number of large pipes down upon the Class 1-A student’s head.

However, Shinso finds himself outmatched against Deku, as he harnesses the newfound Blackwhip ability that had been secretly residing and growing in power within One For All.

With Deku unleashing his new Blackwhip ability, Shinsu attempts to flee, seeing no opportunity that would allow him to brainwash his foe.

This is not to say he fleets without purpose, as he hopes to rejoin the main melee where he can more effectively use his quirk to turn the tide of battle for his team.

His attempt to escape would be to no avail, as Deku uses Shinsu’s Binding Cloth against him and pins the purple-haired Quirk-user down before he can rejoin his allies. 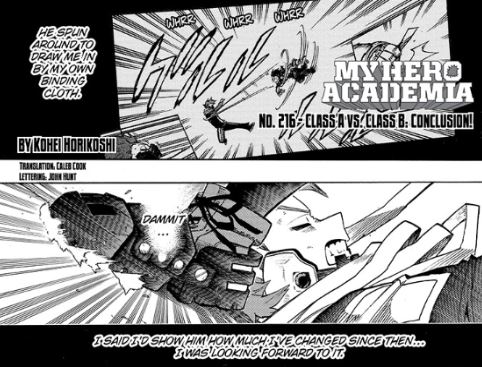 Following his defeat at the hands of Deku and Class 1-A, Shinso would reveal his suspicions that his inclusion in the training exercise was a test on whether or not he would be able to transfer into the Hero Course. 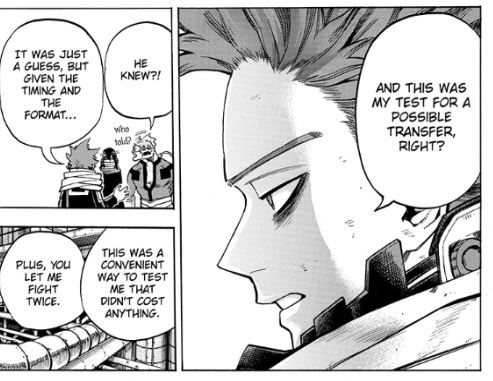 He initially believes that he did not prove himself worthy of being able to transfer, but following the post-exercise analysis by Aizawa, it is annoucnd that Shinso will be joining the Hero Course beginning in his second year. 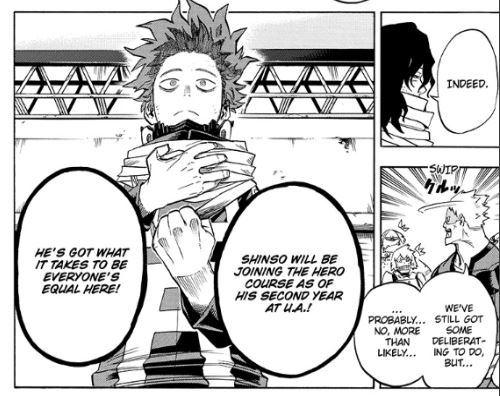 However, it was not revealed whether he would be joining Class 1-A or Class 1-B.

And that’s where Shinso’s story has ended for now. It’s more than likely we will see him when the students return to U.A. for their second year.