After Moro fused himself with the planet, revealing the Dragon Ball franchise’s most insane transformation yet, Goku is pushed to the limit by his fight with Moro, only for an unlikely ally to make his return and turn the tide of the battle in the latest chapter of Dragon Ball Super!

Thanks to Goku’s kind-hearted show of mercy in the last chapter, Moro has begun to adapt to his newfound planet-form, beginning the chapter by absorbing the energy of Earth’s inhabitants en masse through their physical touching of the planet’s surface. 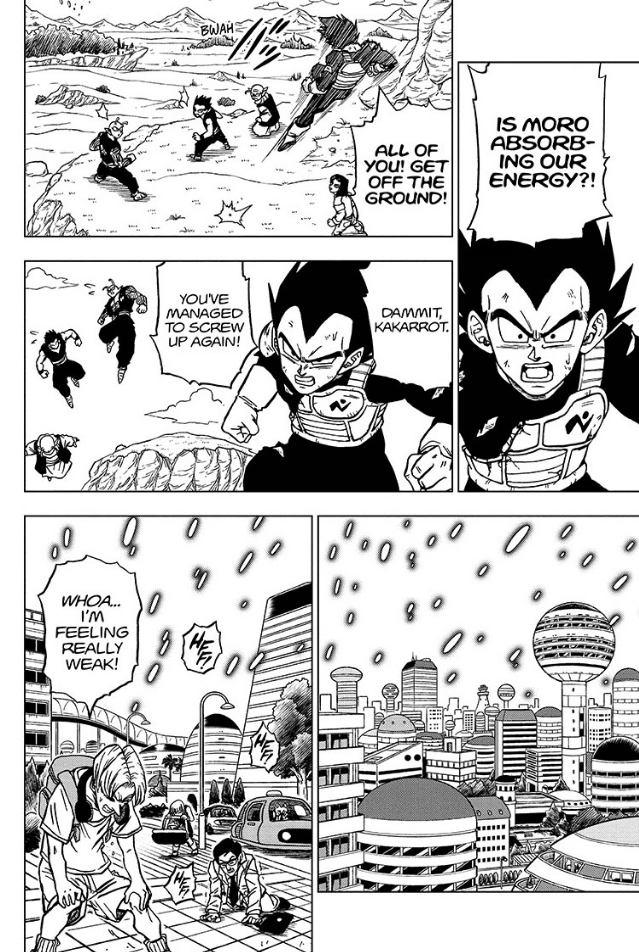 After Goku demands that he cease his absorption of the innocents’ energy, Moro turns his attention towards the Ultra Instinct-powered Saiyan and unleashes his new earth-manipulations powers, leading to the first battle between Dragon Ball’s iconic protagonist and a literal planet. 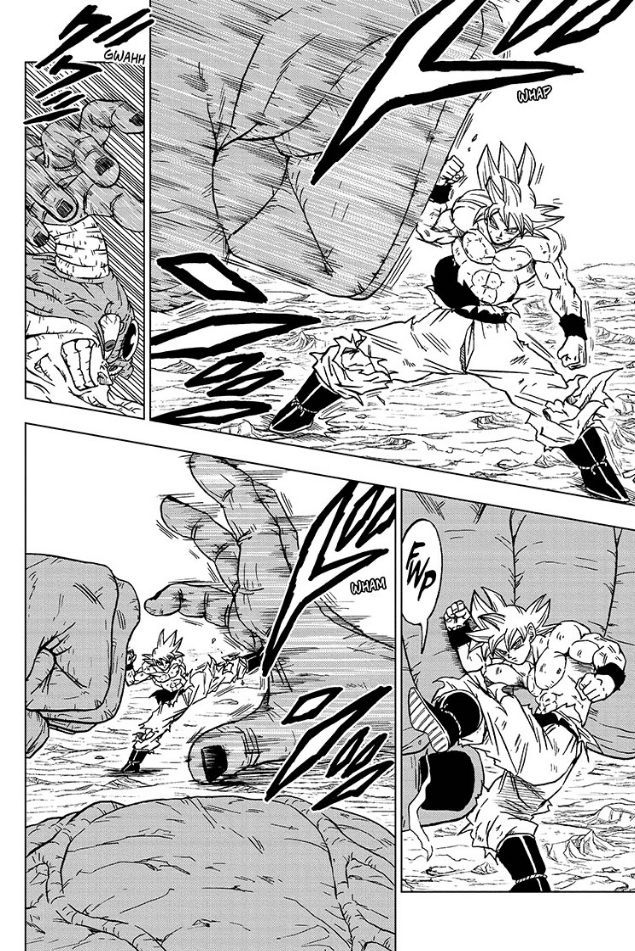 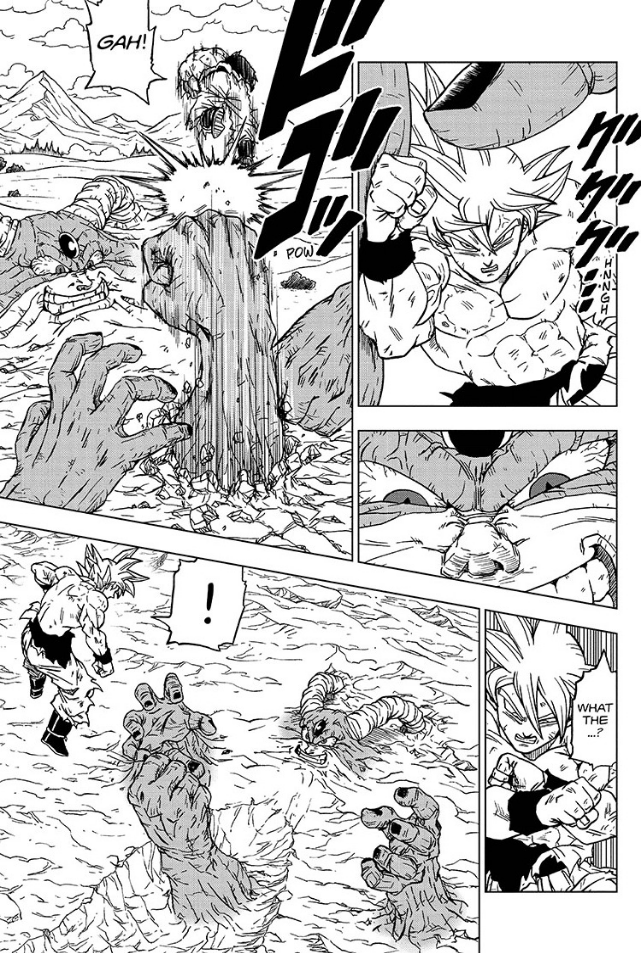 Observing the battle from the air, Whis notes that Goku’s continuous dodging of Moro’s attacks does little to defuse Earth-Moro’s planned-self-destruction, which prompts Beerus to “lend a hand”, with the God of Destruction reasoning that “losing Earth would be troublesome, you know.” 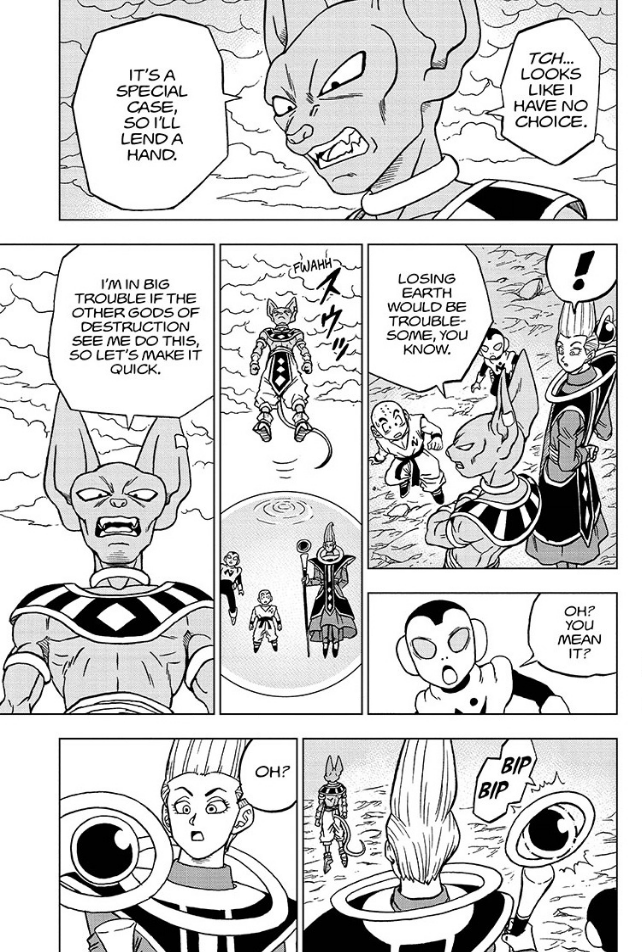 Suddenly, before he can put a swift and decisive end to the battle, Beerus is summoned by the Grand Priest to discuss the matter of Meerus’ death, an order which terrifies him into abandoning his attack on Moro and demanding Whis answer their summons immediately. 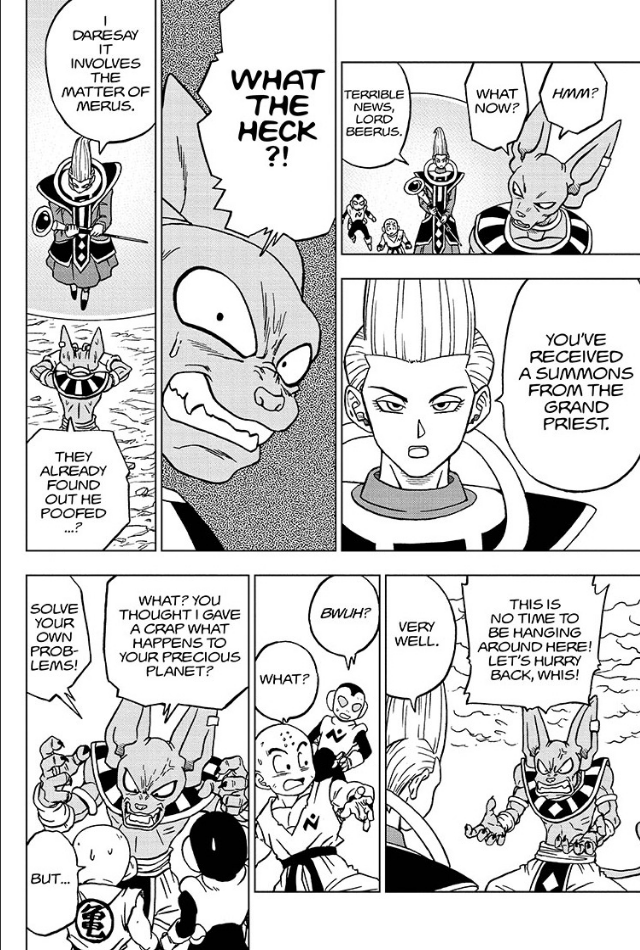 Before their departure, Whis takes a moment to advise Goku that his best bet in defeating the magical villain would be to, like Meerus, once again shatter his forehead crystal, but in response, Moro conceals his gem further within the mountainous landscape of his battlefield-person.

Concerned that he is unable to see Moro’s weak spot, Goku is quickly assisted by Vegeta, who rushes to rip away the villains newly acquired energy, and thus slowly reveal his forehead crystal, through the continual use of his recently-learned Forced Spirit Fission technique. 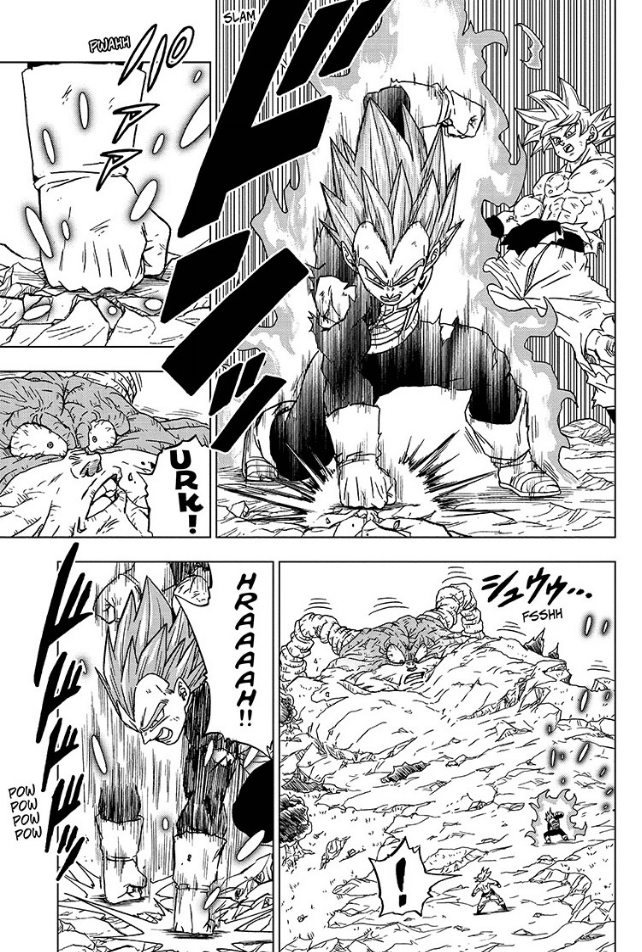 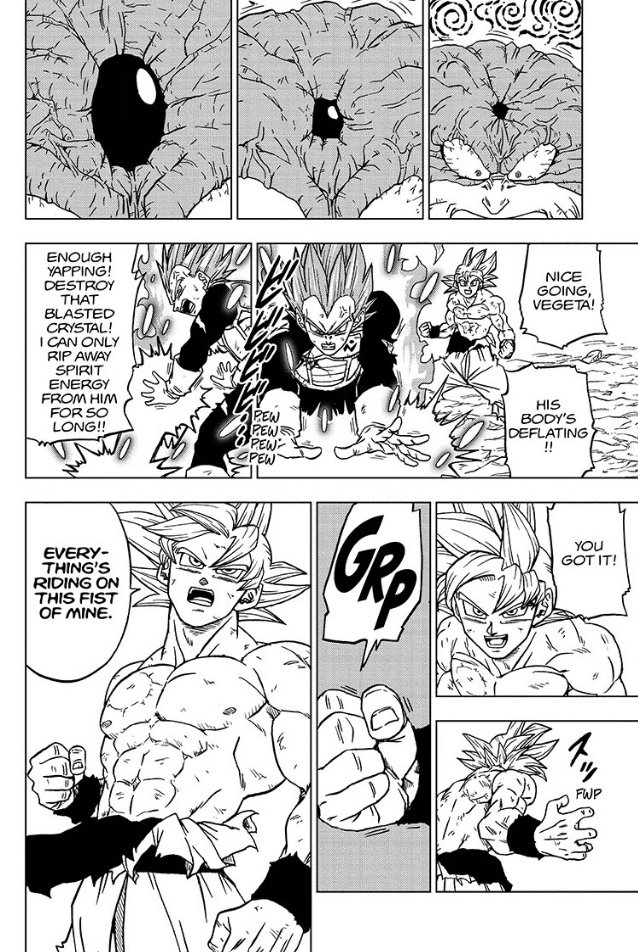 Taking advantage of this new opportunity presented by Vegeta, Goku proceeds to rush through the battlefield, rapidly dodging Moro’s various attempts to stop him, only to find at the last moment that, unfortunately, the power used to elevate himself to Ultra Instinct is not enough to put an end to the battle, and that he is unable to successfully shatter the source of his opponent’s power. 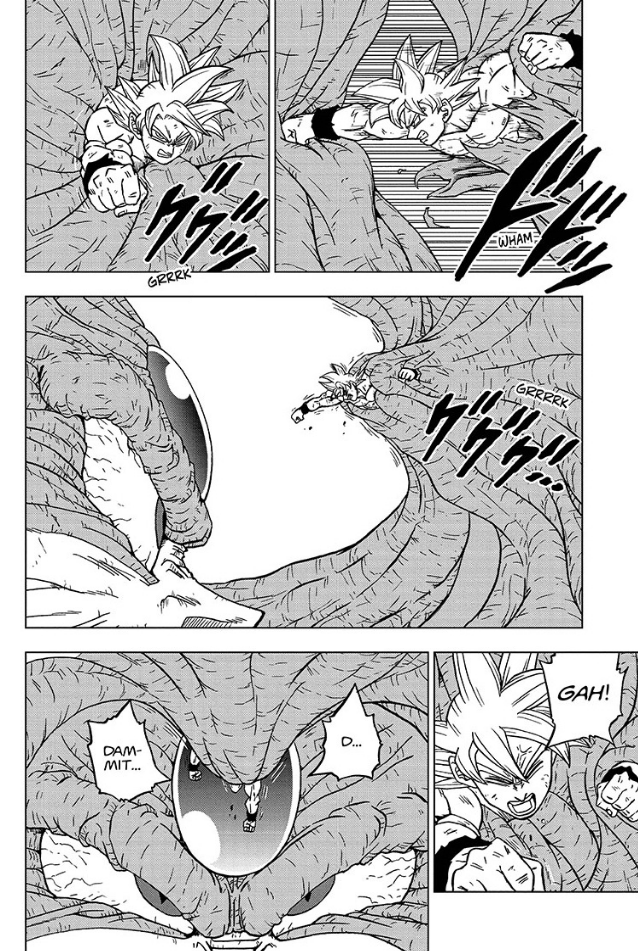 As Moro begins to drain the energy from Goku’s body, causing his hair to darken from Ultra Instinct white to standard Saiyan black, Piccolo asks Vegeta whether he can perform his Force Spirit Fission in reverse, allowing for someone to receive power rather than having it taken away from them.

After confirming that this was within his ability, the Z-Fighters then take a page out of the Buu Saga, and ask their allies to provide them with their energy (including Goten and Trunks, clad in their own versions of Android 17’s forest ranger attire), before Vegeta ultimately bestows the accumulated power upon Goku. 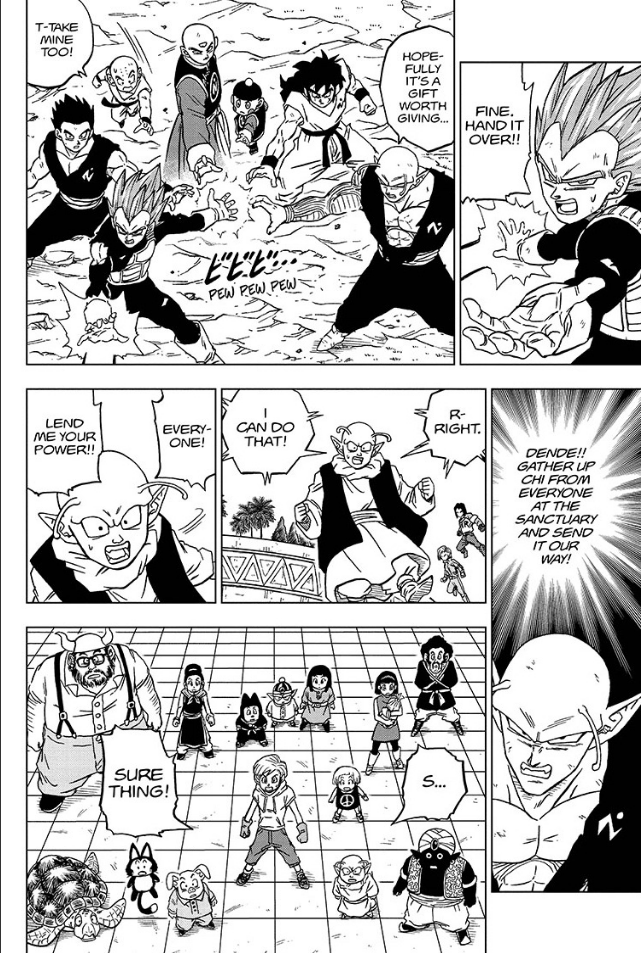 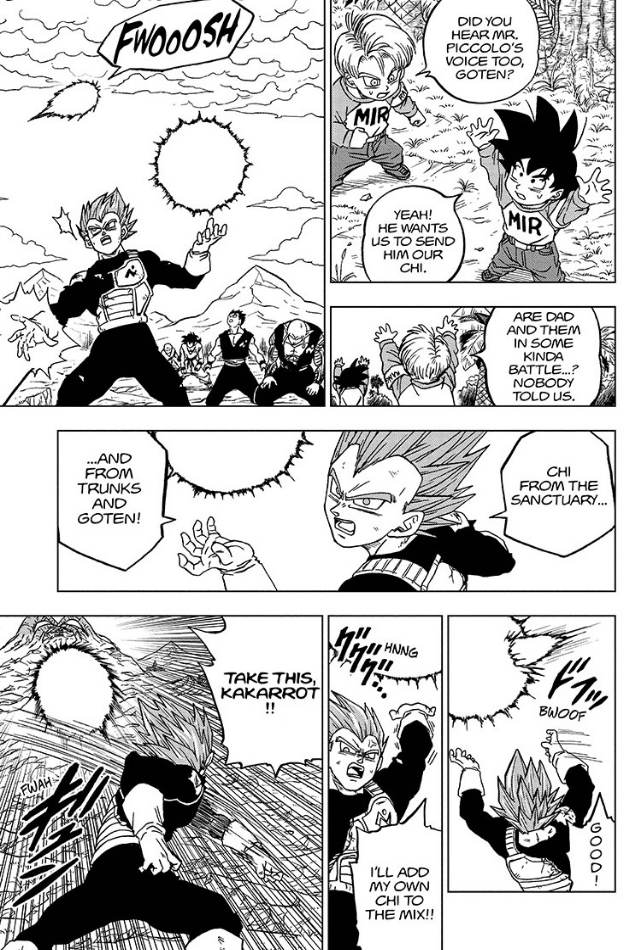 Their efforts prove futile, and despite one final push to punch through Moro’s forehead, Goku eventually finds himself exhausted, while the other Z-Fighters realize that there’s nothing left to do but face the end of their entire galaxy. 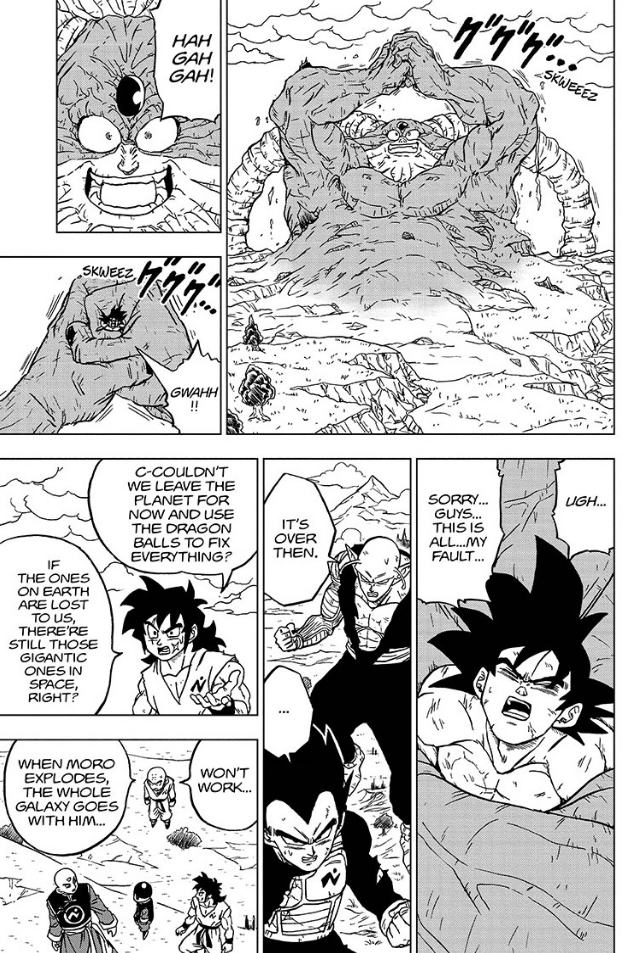 Suddenly, a gigantic ball of energy flashes across the sky, rivaling only the moon in its spherical volume. 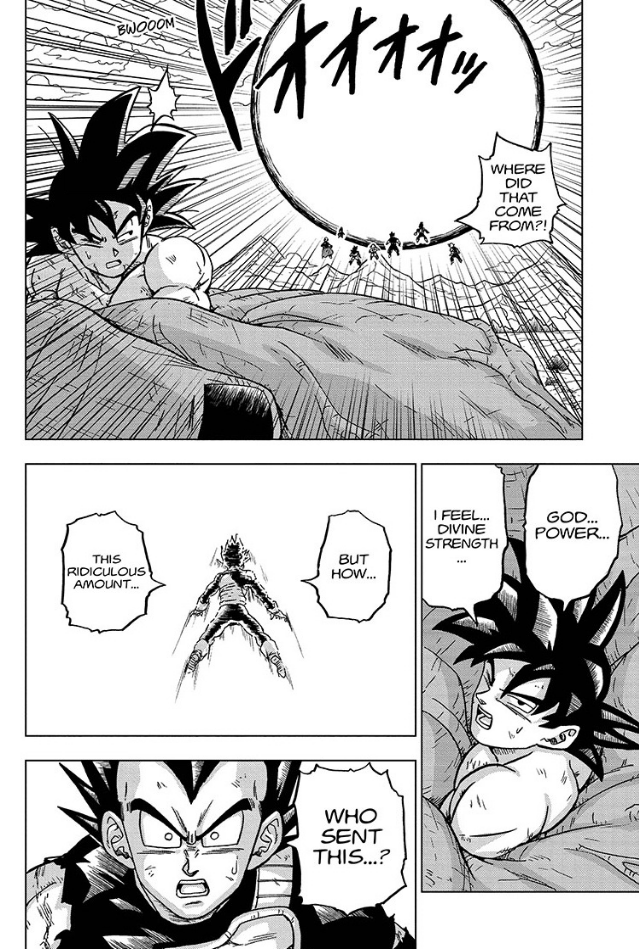 As Vegeta asks “who sent this”, it is revealed that the energy was provided by none other than Uub, the reincarnation of Majin Buu, who until this moment had made his only canon appearance within Dragon Ball during the final scene of the original series.

Of course, given that this scene portrays the world ten years after the defeat of Majin Buu, and that ‘Super’ takes place in the space between the ending of the Buu Saga and that final moment, Uub assistance against Moro marks his first ever chronological appearance within the canon Dragon Ball series. 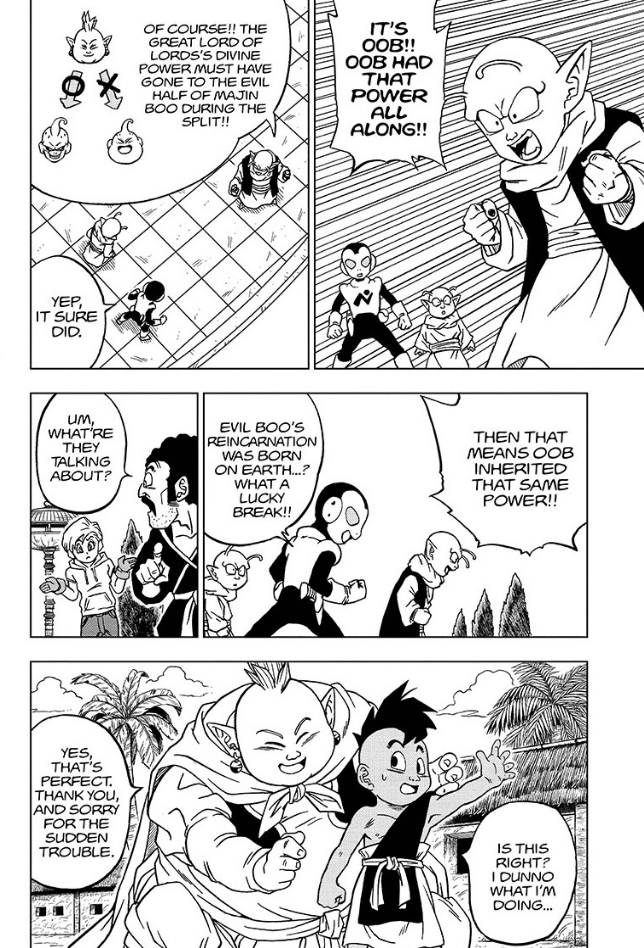 With the energy donated by Uub, Goku is able to not only re-achieve Ultra Instinct, but the raw amount of ki he now possesses takes the appearance of a giant-sized version of the Earth-raised Saiyan, and through the use of this power, is able to successfully make contact with Moro’s forehead, shattering the gem and seemingly putting an end to the threat posed by the ancient evil once-and-for-all. 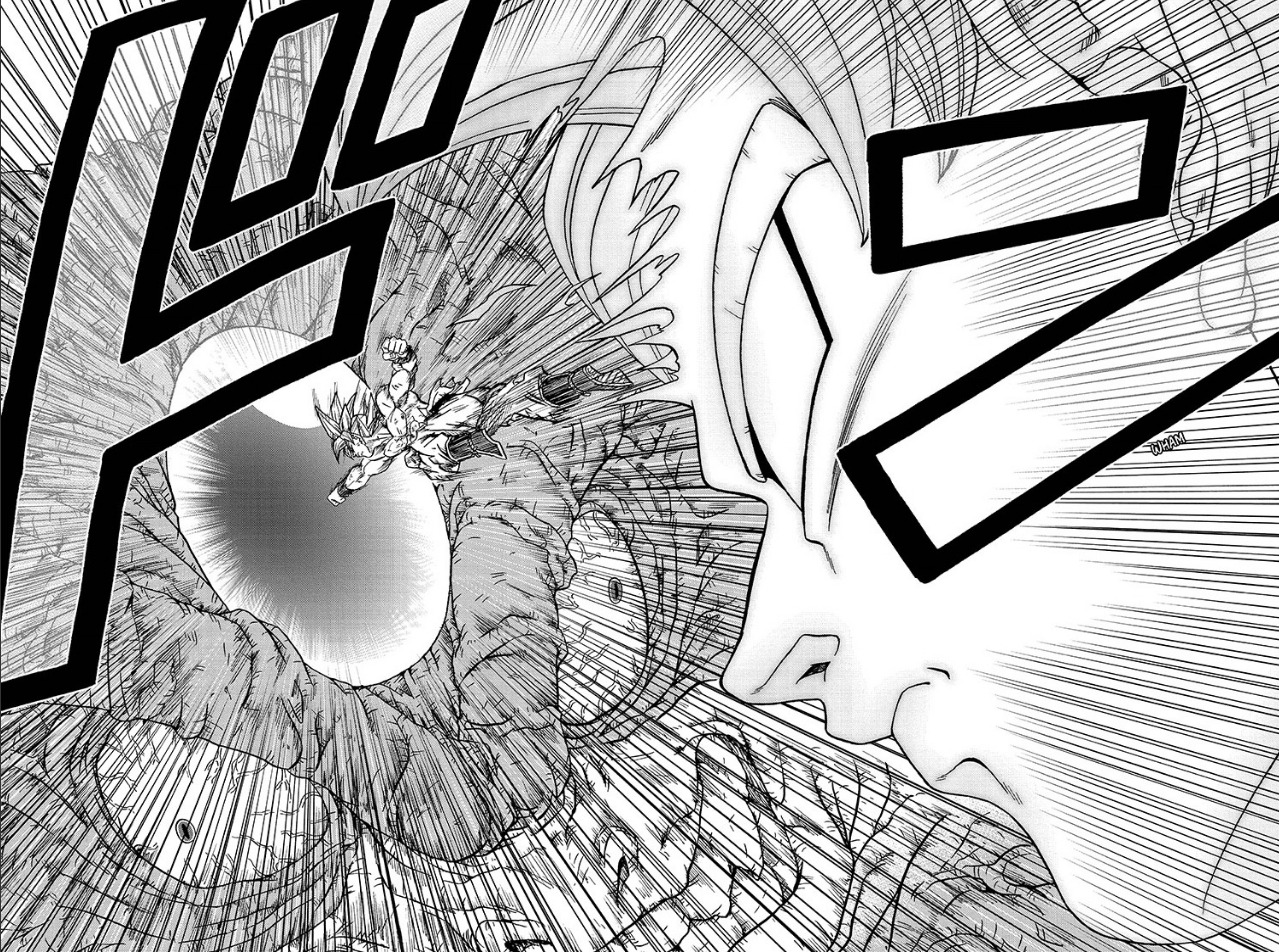 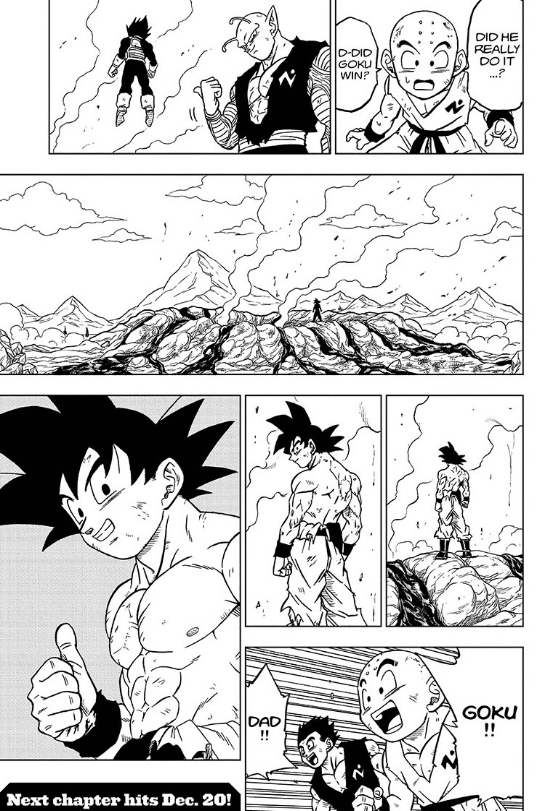 Whether Moro’s reign of terror is truly at and end or not will be seen when the next chapter of Dragon Ball Super drops on December 20th.

Until then, the series’ latest chapter is available to read for free on Viz’s official website.

What did you make of this chapter? Do you think Moro’s truly defeated? Let us know your thoughts on social media or in the comments down below!