Bioware voice actor Greg Ellis, who provided the voice of Cullen and Anders in the Dragon Age series and Mical in Star Wars: Knights of the Old Republic II, reacted to the news of Mark Darrah’s departure from the studio by describing the now-former Dragon Age producer as the most “DISLOYAL, duplicitous corporate fake” he had ever worked with. 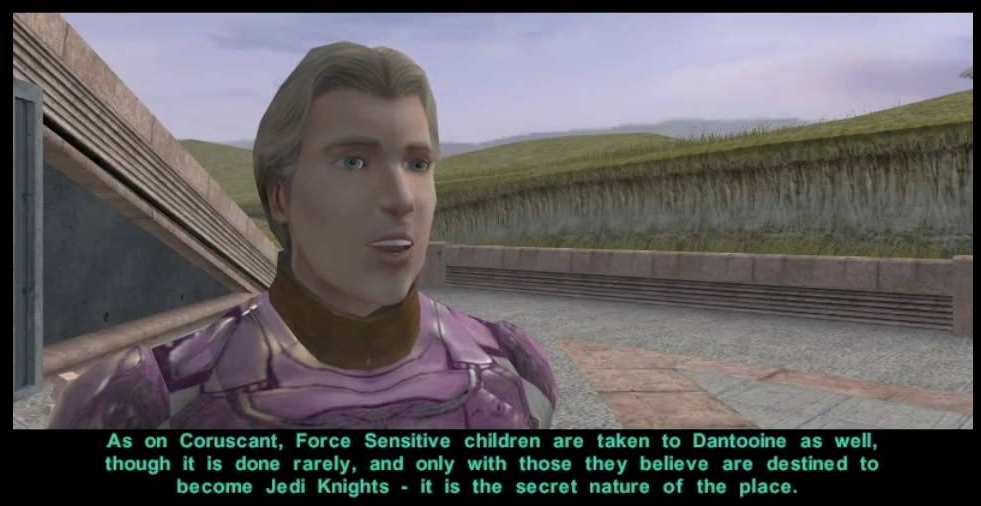 Darrah, alongside GM and Mass Effect Director Casey Hudson, announced their departure from the studio on December 3rd, with the former describing the announcement as “some important, if sad, news” on his personal Twitter account.

In response to Darrah’s tweet, Ellis conversely asserted that Darrah’s exit was “a relief for many others” and claimed that it was not a voluntary departure for greener pastures, but in fact a forced resignation.

“I’ve worked with you for over 10 years as the voice of Cullen (and Anders) @dragonage & have never worked w a more DISLOYAL, duplicitous corporate fake,” exclaimed Ellis. “Your enforced *resignation* is a victory for @bioware, its employees & particularly the fans.” 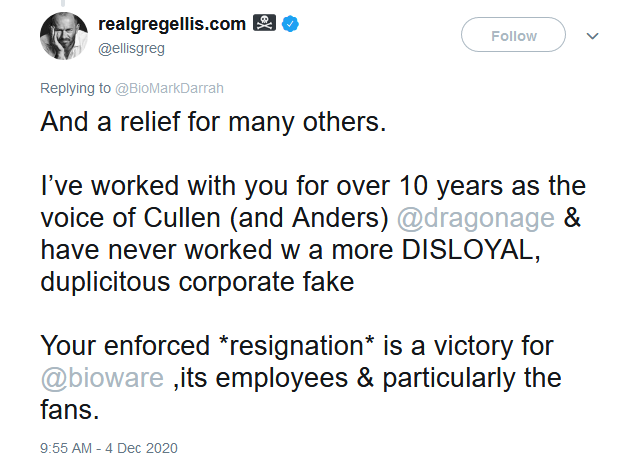 In addition to his work for BioWare, Ellis is also best known as Lieutenant Commander Theodore Groves in Pirates of the Caribbean: On Stranger Tides, Baron Valen Rudor in Star Wars Rebels, and Final Fantasy 7’s Cait Sith in all the character’s voice appearances prior to Final Fantasy 7 Remake.

Ellis’ disdain for Darrah appears to stem from an incident from earlier this year after he stood in support of Harry Potter author J.K. Rowling’s right to criticize current transgender politics.

In response to a Twitter user who described Ellis as a “transphobic, racist asshole,” Darrah wrote, “Like you, it’s important to us that the people we work with are aligned with our BioWare values.”

“This will be apparent when we’re ready to announced which actors will be lending their voices to [Dragon Age 4],” Darrah assured the concerned fan. 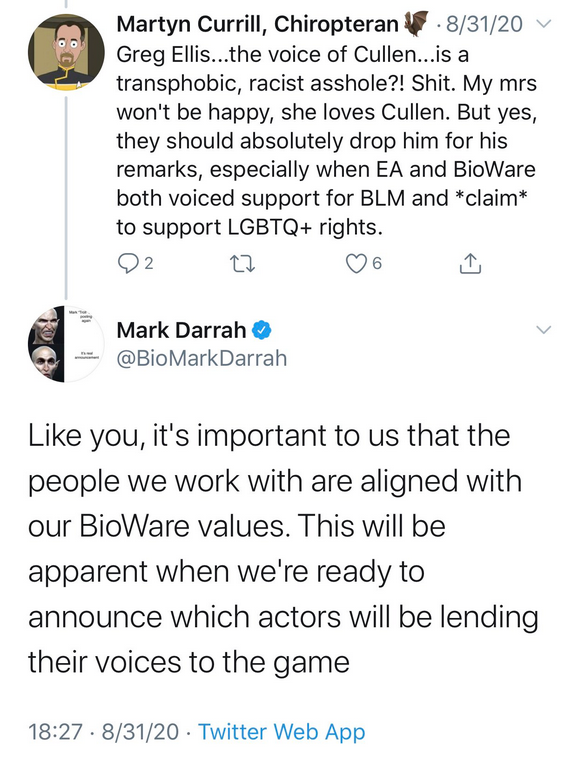 Following Darrah’s comment, Ellis asked the producer “what are the @bioware values”, specifically wondering if these values included support for “cancel culture” and “defamatory comments.”

“Careful how you answer,” Ellis sarcastically warned. “You might lose your job.”

At the time, Ellis explained that he stood for “human rights,” which included “the right to say and believe whatever you want, even if I don’t agree with you.” 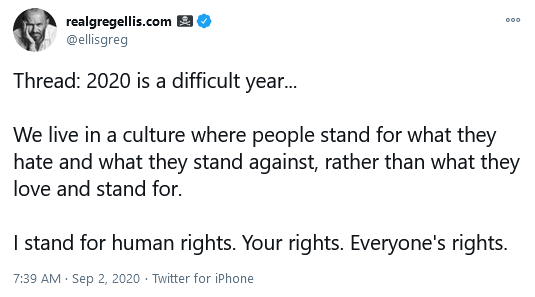 He also declared, “That is why I stand with @jk_rowling, and, with every fan of @DragonAge, regardless of whether or not we agree.” 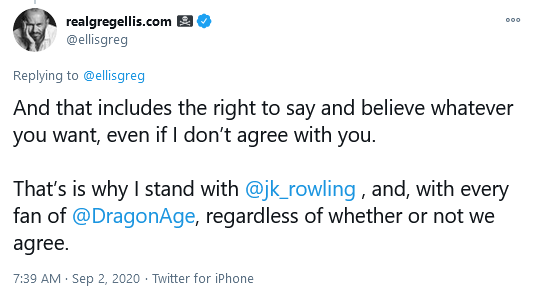 “I will always defend the rights of people like this and indeed ALL human beings to express their opinions without the fear of cancellation, public shaming or violence, regardless of whether or not I agree with them. I support everyone’s right to exist and speak their mind,” Ellis further clarified. 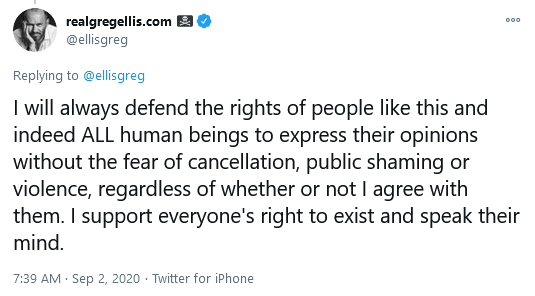 He added, “I believe in equity of opportunity and that everyone is created equal. Black lives matter, and they don’t matter more than anyone else’s. I love everyone. I support everyone’s life choice and decision to love however they please, and to identify with whatever gender they prefer.” 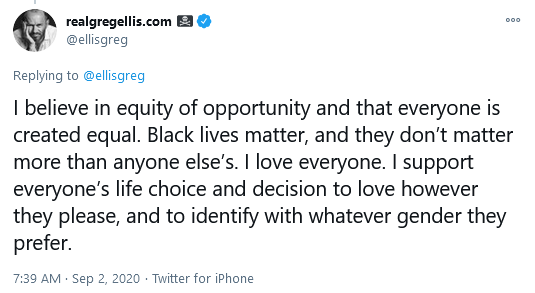 After taking notice of Ellis describing Darrah as a “DISLOYAL, duplicitous corporate fake,” Darrah told the voice actor that, I’ve been letting you slide for a while but I think Dragon Age Day is maybe the day when that ends.” 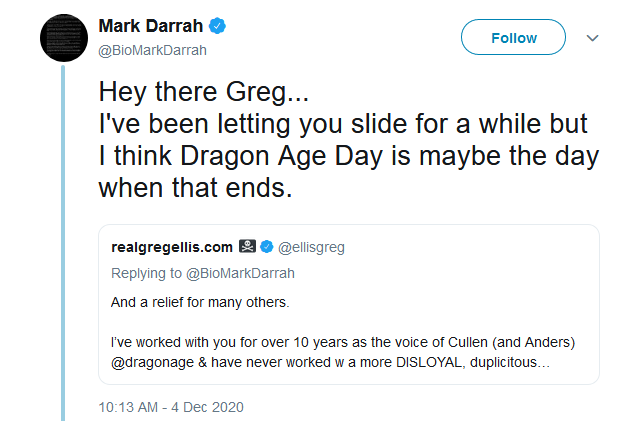 “Is there some world where you imagine that your behavior with regards to me and the community in general would actual cause you to EVER be hired on a Dragon Age game?,” asked Darrah.

“I’m not sure if this is performative in some way in order to get the attention of a different group, but it CERTAINLY isn’t going to endear you to a company that cares about its public appearance,” Darrah added in a subsequent tweet.

Not one to back down from a public argument, Ellis shared how he found it “telling that you finally respond on the day your forced resignation was announced,” and asked if “by ‘letting me slide’ you mean ‘posting vague *corporate values* tweets on sub-threads supporting bigots who defamed a voice actor of a BioWare game.’”

“Enough with the hypocrisy,” declared Ellis. 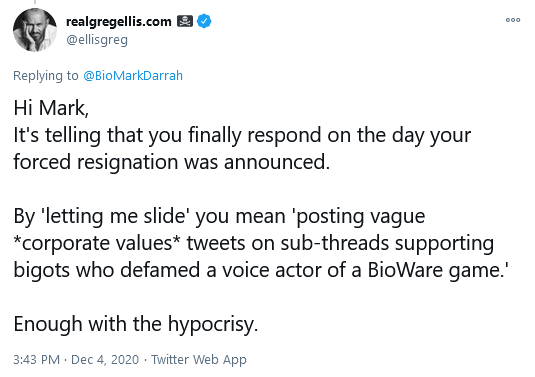 The voice actor then turned Darrah’s own rhetoric against him, asking the producer “Is there some world where you imagine that your behavior with regards to me, the community and your fellow BioWare employees in general would cause you to EVER be hired by another video game company?”

He then extended an “open invitation to come on my show [The Respondent podcast] to discuss”. 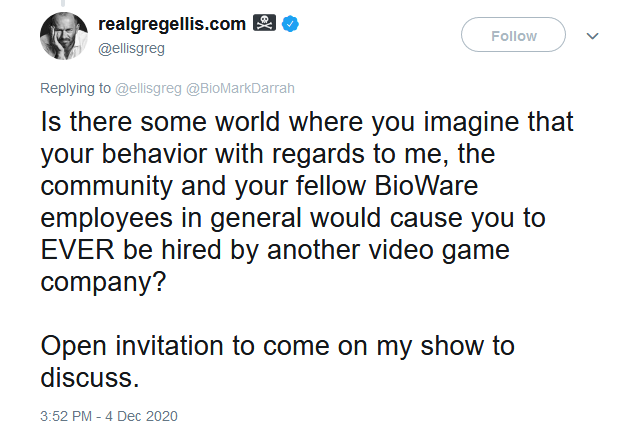 “You really don’t understand what is happening right now do you?” responded Darrah, meeting Ellis’ inquiry with his own. “Thank you for the invite but I think you have gotten enough of a signal boost from me today Greg.” 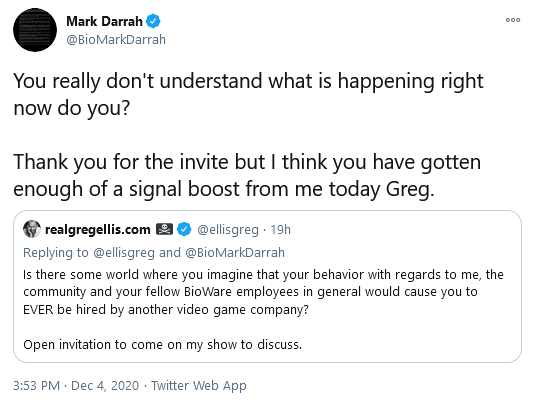 “I’m standing up for MY values,” replied Ellis. “Having watched you publicly pander to a few small minded bigots for the last couple of months, you were forced to resign today.”

“Maybe one day you’ll have the gumption to talk about WHY, in public (or private) rather than skulking off,” he concluded. 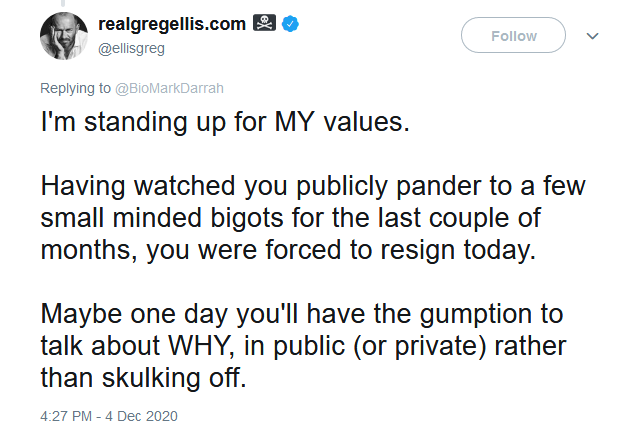 As the back-and-forth between the two Dragon Age icons drew to a close, Ellis celebrated how “The EP of DA is forced to resign after pandering to online bigots who attacked me & a years delay of DA4 delivery.”

He found further amusement in how “#Cullen is trending on Twitter on #DragonAgeDay & the cancel culture mob are crying because The Twilight Saga’s Cullen is getting more attention.”

What do you make of Ellis’ tweets? Let us know your thoughts on social media or in the comments down below!