Not only will it feature this “rematch” between Kenobi and Vader, but Kennedy revealed that Hayden Christensen will return to the role of Darth Vader for the series.

As reported by Cinema Blend, Kennedy stated, “Last August at the D23 Expo in Anaheim, we announced the return of Ewan McGregor in the iconic role of Jedi Master Obi Wan Kenobi for a special event series on Disney+.”

She continued, “Obi Wan Kenobi begins 10 years after the dramatic events of Revenge of the Sith, where he faced his greatest defeat, the downfall and corruption of his best friend and Jedi apprentice, Anakin Skywalker turned evil Sith Lord Darth Vader.”

Kennedy concluded, “Our fans will be thrilled that Hayden Christensen will be returning in the role of Darth Vader. This will be the rematch of the century.”

They also revealed that “the Original Series begins 10 years after the dramatic events of Revenge of the Sith, and is coming to Disney Plus.” 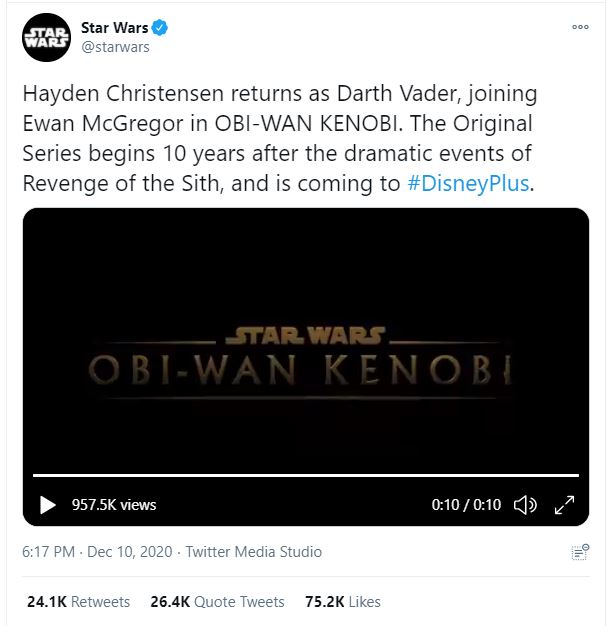 Series showrunner Deborah Chow would tell GamesRadar why they needed Vader in the series, “We couldn’t tell the story of Obi-Wan without Darth Vader.”

Chow added, “We will definitely see Obi-Wan and Darth Vader get into it again.”

The idea that Vader and Obi-Wan Kenobi would meet following the Revenge of the Sith and before the two duel in the original Star Wars film appears to contradict the actual dialogue between Vader and Obi-Wan in A New Hope.

In that film, Vader tells Kenobi, “I’ve been waiting for you, Obi-Wan. We meet again at last. The circle is now complete. When I left you, I was but the learner. Now I am the master.”

Kenobi would reply, “Only a master of evil, Darth.”

Not only does a rematch between Vader and Kenobi contradict A New Hope, but it also appears to be contradictory to George Lucas’ original vision.

In a recently resurfaced story about Lucas’ original plans for Anakin Skywalker from the 1981 Revenge of the Jedi Story Conference sees Lucas explain why Obi-Wan Kenobi doesn’t raise Luke Skywalker himself, but instead stays hidden in the deserts of Tatooine.

Lucas stated, “Ben takes one and gives him to a couple out there on Tatooine and he gets his little hideout in the hills and he watches him grow. Ben can’t raise Luke himself, because he’s a wanted man.”

What do you make of this idea that Kenobi and Vader will duel again in the Kenobi series? Do you think they should duel again before meeting in A New Hope?