The season two finale for The Mandalorian might have many fans excited for the return of Luke Skywalker, but it also hints at a grisly fate for Baby Yoda aka Grogu.

The mission appears to be going swimmingly after Djarin defeats Gideon and Bo-Katan’s team takes over the bridge. However, the tables are turned when a platoon of Dark Troopers attack the ship in an attempt to rescue Gideon.

With things looking bleak for The Mandalorian and his allies a lone X-Wing docks on the ship. Luke Skywalker arrives and begins tearing through the Dark Troopers. He eventually defeats all of them and arrives at the bridge.

Upon arriving at the bridge, he reveals he has come to take Grogu away to complete his training. He tells Djarin, “He is strong with the Force, but talent without training is nothing.”

He adds, “I will give my life to protect The Child. But he will not be safe until he masters his abilities.”

From there Djarin says his goodbyes and lets Grogu go with Luke Skywalker to complete his training.

If The Mandalorian continues to stay in the same continuity as Disney’s sequel trilogy, Grogu might end up becoming a victim of Kylo Ren.

We know from The Last Jedi that Kylo Ren slaughters Luke Skywalker’s students at his newly built Jedi Temple.

Skywalker told Rey, “When I cam to, the temple was burning. He had vanished with a handful of my students and slaughtered the rest.”

Grogu was not among the handful of students that vanished with Kylo Ren as their story would be told in the canon Marvel Comics miniseries The Rise of Kylo Ren.

Not only would their story be told, but it also reveals that Kylo was the one who summoned a Force thunderstorm that destroys the Jedi temple killing all within it, which more than likely would have included Grogu if Luke trains him there. 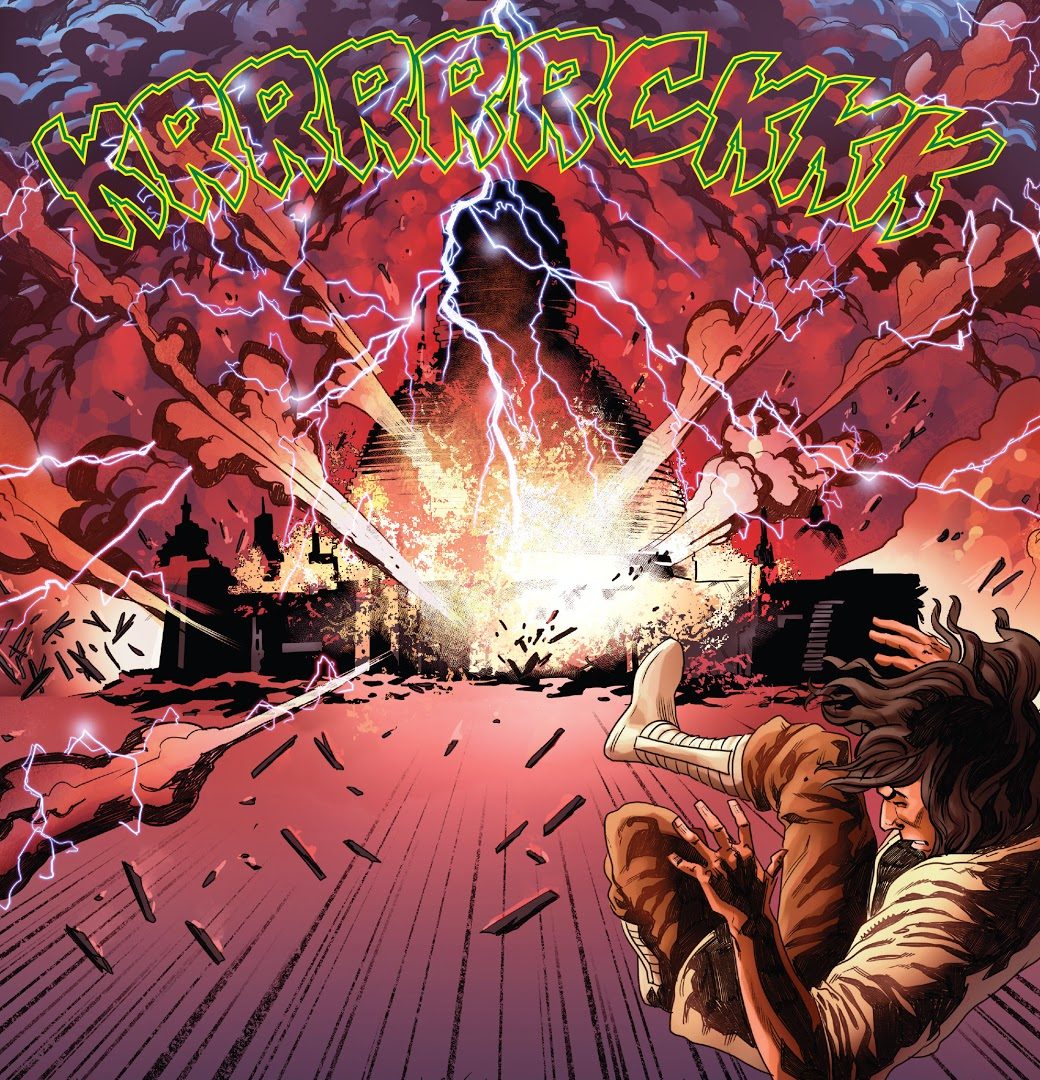 Those who do survive the attack are three Padawans named Hennix, Tai, and Voe. And the reason they survive is because they were off planet when Ren destroyed the temple with his Force lightning storm.

However, even they too would fall as they attempted to pursue Kylo Ren. 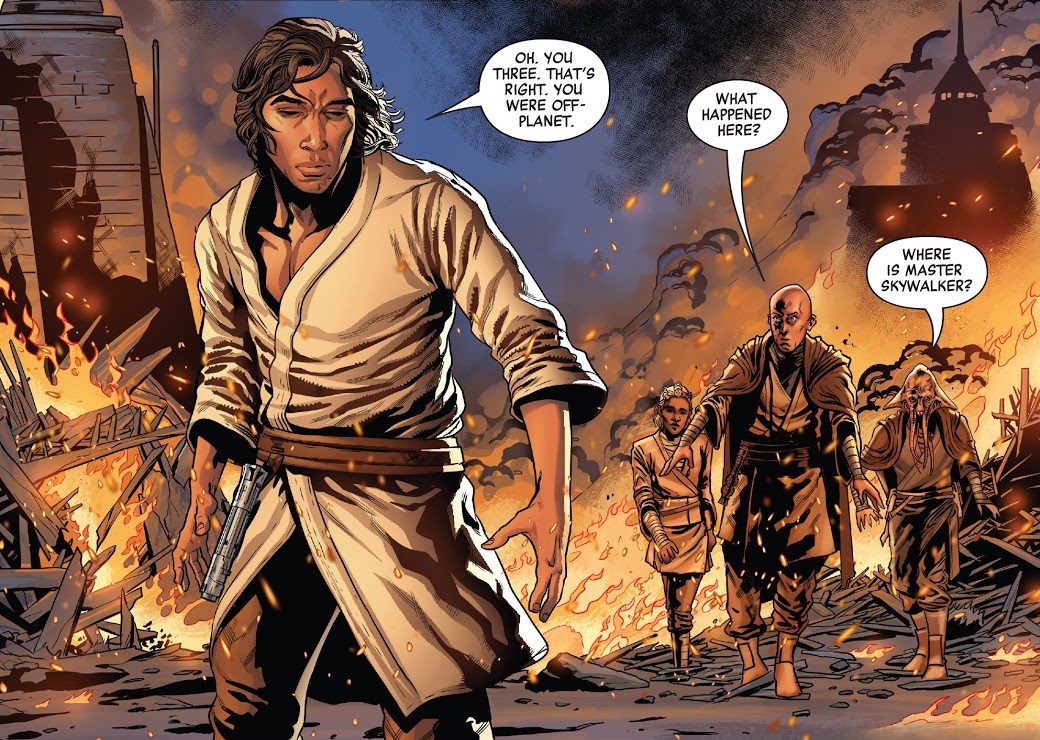 Kylo Ren would end up killing Hennix after the three Padawans pursued him to the Outer Rim planet of Elphrona. When Hennix threw his lightsaber at him, Kylo sent it flying back at him using the Force. It was a quick death.

Kylo would then leave the planet and travel to The Mimemoon of Mimban in the Mid Rim in the company of the Knights Ren.

When Voe and Tai pursued Kylo Ren to the planet, the leaders of the Knights of Ren named Ren would kill Tai by snapping his neck with The Force.

Kylo would then proceed to kill Ren and fall to the Dark Side. After killing Ren he would then execute Voe stabbing her through the chest with the red lightsaber that once belonged to Ren. 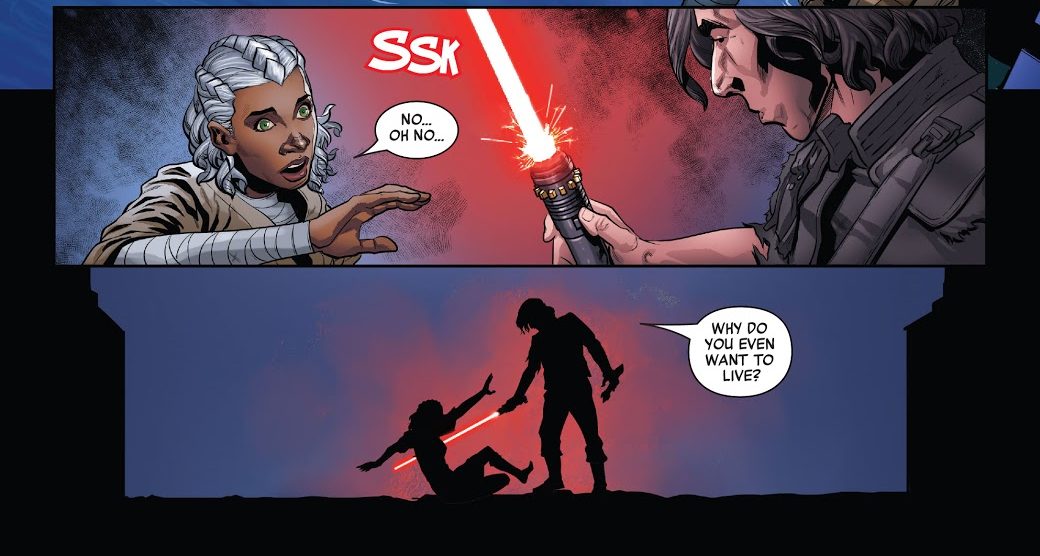 Now, it’s possible that Grogu could have been off planet as well, but it’s hard to imagine that Emperor Palpatine would let Grogu out of his grasp when he’s manipulating the First Order through Snoke.

In all likelihood, Grogu is dead like Ahsoka Tano by the time of Star Wars: The Rise of Skywalker.

It’s just a reminder that The Mandalorian leads into the Disney sequel trilogy.