Jennifer Garner has never been hotter than when artist Datrinti imagined her as the X-Men’s Jean Grey.

Jean Grey is one of the original X-Men and one of the most popular characters in Marvel’s entire catalogue.

She first appeared in X-Men #1 all the way back in 1963 alongside Beast, Iceman, Cyclops, and Angel. 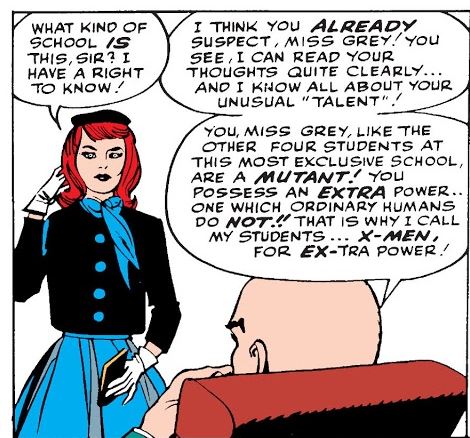 When Jean first arrived at Charles Xavier’s exclusive private school in New York’s Westchester County, all of the members of the X-Men aside from Iceman couldn’t keep their eyes off her.

Cyclops described her as a “real living doll!” Angel would add, “A redhead! Look at that face..and the rest of her!”

Beast added, “All of a sudden, I’m in no hurry to graduate from this place!” The only person not commenting on Jean’s good looks was Iceman who stated, “A girl…big deal! I’m glad I’m not a wolf like you guys!” 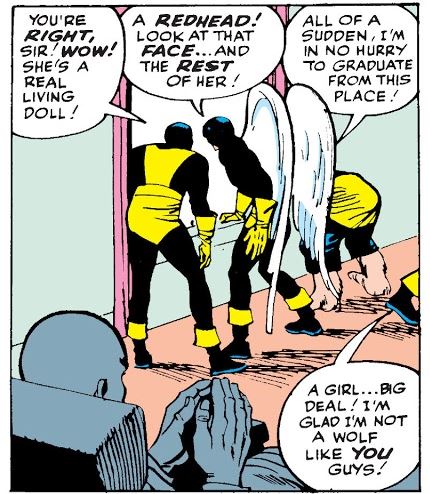 When she finally met the rest of the X-Men, Charles Xavier would quickly add her to the X-Men team and gave her the codename Marvel Girl.

However, her mutant ability was a still mystery so she decided to provide a little demonstration for her overly friendly classmates.

She revealed she has the ability of telekinesis that allows her to move objects at will by the power of her mind.

After learning about Xavier’s school and the mission of the X-Men, which is to protect mankind from evil mutants who want to rule over them, she gladly joins the team and even tries on her very own X-Men uniform. 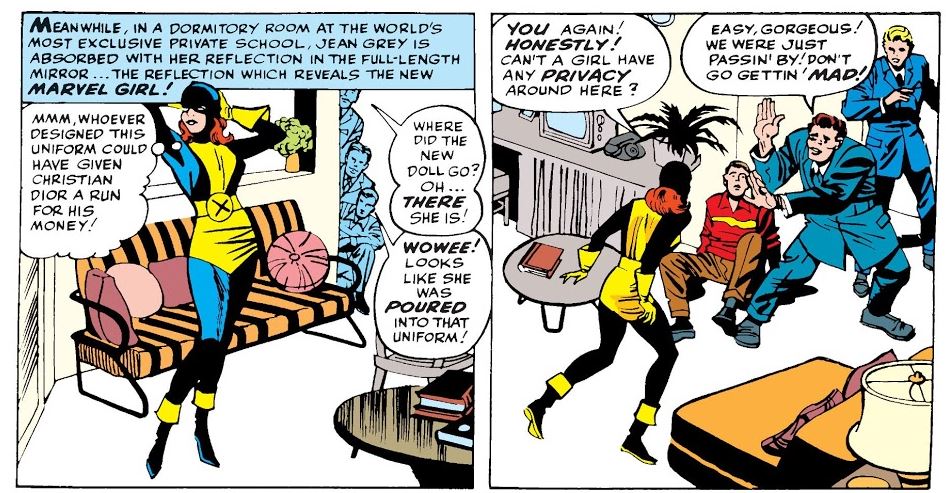 For her first mission, Jean and the rest of the X-Men are tasked with defeating Magneto who has taken control of a top secret U.S. military base at Cape Citadel.

When the X-Men arrive they have to figure out how to penetrate Magneto’s force field that he is constructed. Fortunately, Cyclops is able to take it out with a maximum power optic blast.

From there a battle ensues with Magneto throwing everything he has at the X-Men from the base’s hunter missiles to massive building beams and even a whole tank of ignited rocket fuel. 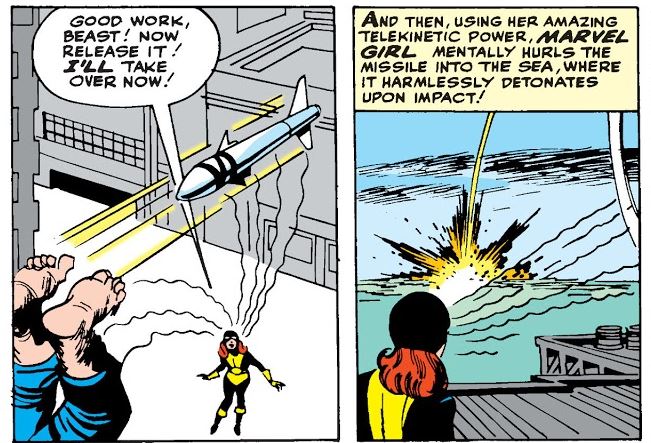 While it appears Magneto might have finally gotten the upper hand with the ignited rocket fuel, the X-Men are able to avoid the attack and proceed to launch their own ambush against Magneto.

However, the Master of Magnetism is able to escape them by creating a second force field that delays the X-Men enough for him to escape.

While Magneto might have gotten away, Jean and the X-Men are successful in recapturing Cape Citadel.

This would just be the beginning of Jean’s adventures as she would take part in a number of adventures with the X-Men. 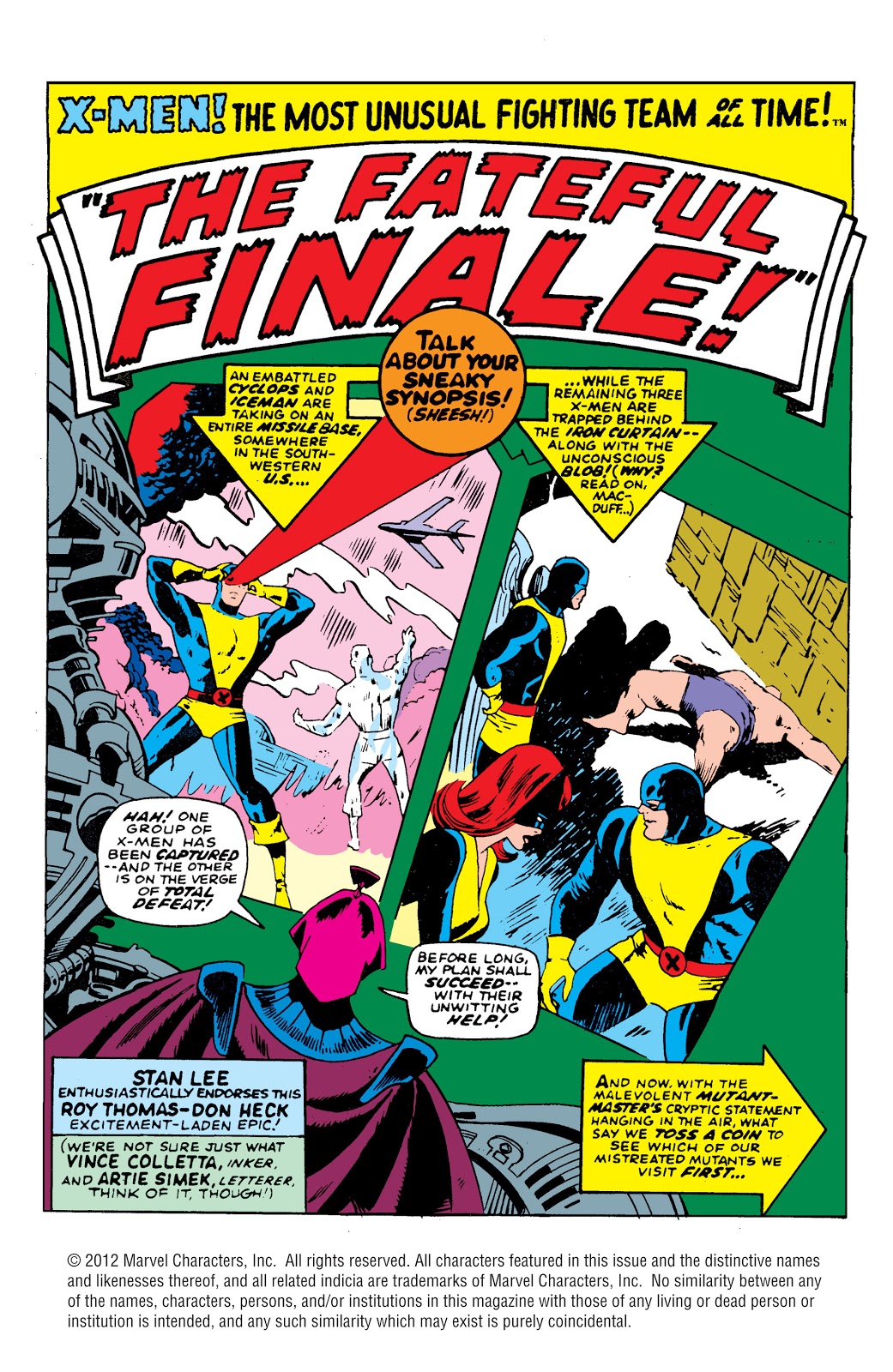 In one adventure documented in X-Men #39, Jean Grey and the X-Men do battle against the Mutant-Master, Blob and the Evil Mutants behind the Iron Curtain in the old Soviet Union.

After eliminating a dirty bomb meant to spark a nuclear war between the United States and the Soviet Union, Jean Grey and her X-Men team rush back to the United States to confront the Mutant-Master and the Evil Mutants. 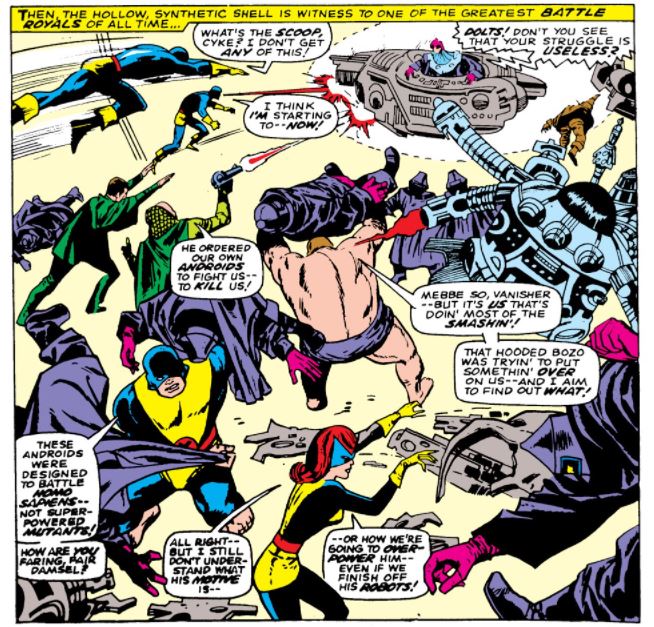 An all out brawl breaks out and it is revealed that the Mutant-Master is not a mutant at all, but an monstrous tentacled alien that hails from the star-sun Sirius.

After defeating the Mutant-Master, the alien being refuses to be captured, but instead kills itself with it’s own deadly blast.

In the aftermath of the fight, Jean Grey gives all the X-Men brand new uniforms including her now classic green dress with yellow mask, yellow gloves, and yellow boots.

Jean Grey’s outfit wouldn’t undergo a change until X-Men #101 when she becomes the Phoenix.

After attempting to save the X-Men by gambling on her telepathic powers to shield her from an intense solar storm. Her gamble doesn’t appear to work as the space shuttle she was piloting crashes to Earth. 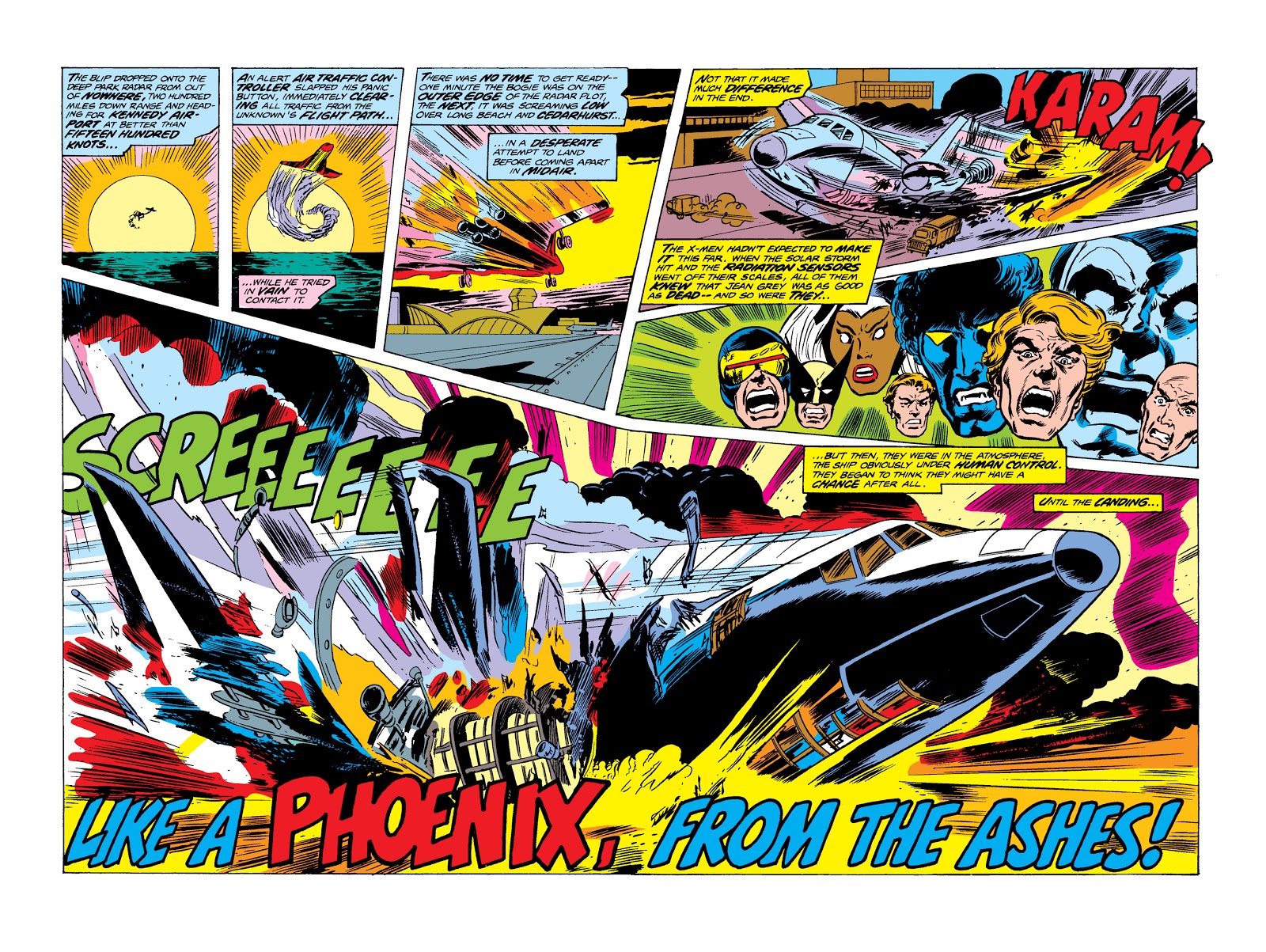 Miraculously the X-Men are able to survive the crash; however, it appears that Jean did not. But just as quickly as you thought Jean was dead, she arose from the bottom of the ocean and burst forth in a brand new costume and declaring herself the Phoenix.

Not only does she call herself the Phoenix, but she’s also got a brand new costume 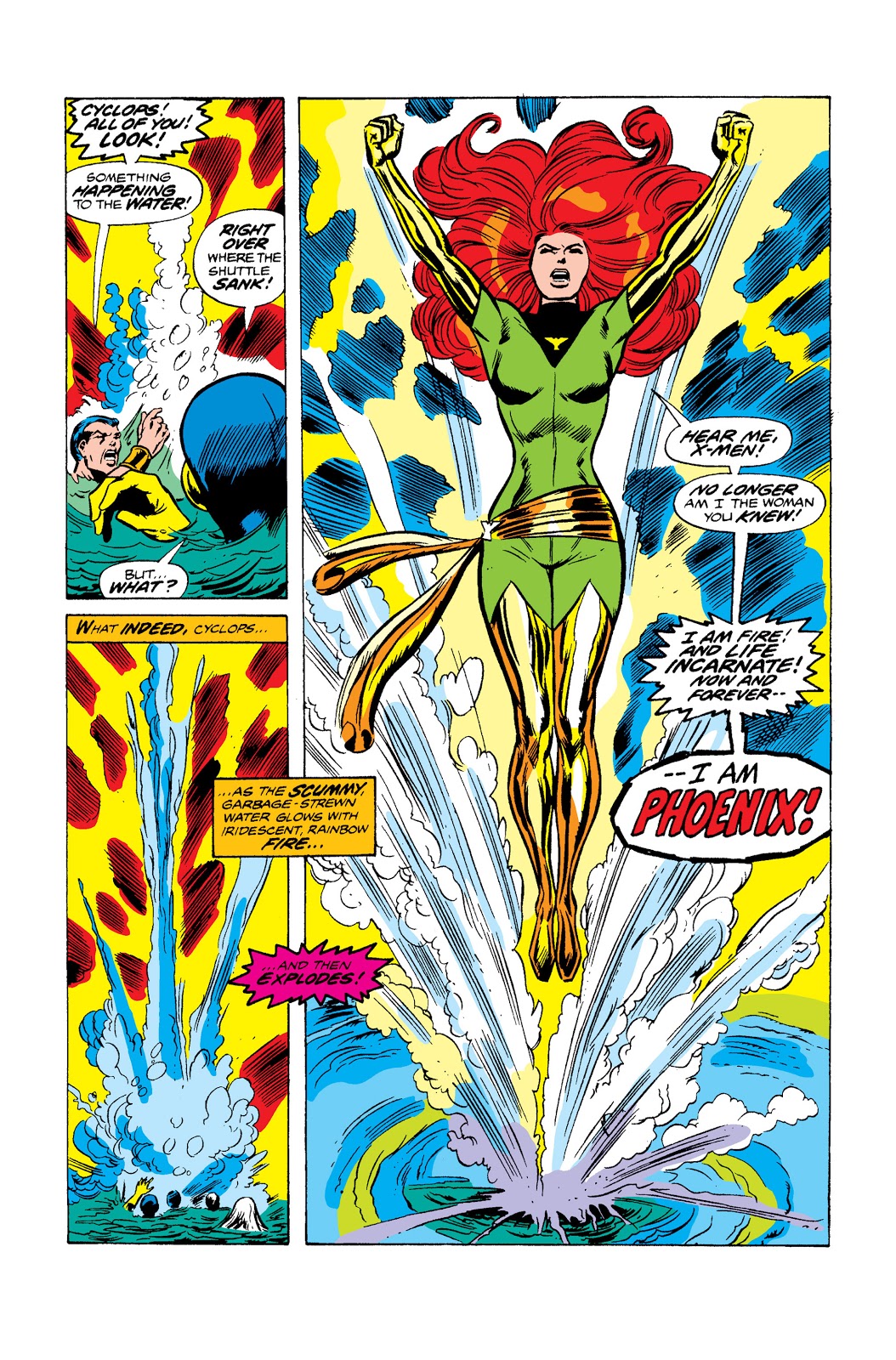 As you can see above, Jean is seen in her iconic green Phoenix outfit. Gone is the green dress and it’s been replaced by a green one-piece with a golden phoenix symbol emblazoned on a black neck area.

She also wears long golden gloves and thigh-high golden boots. The outfit is finished with a golden sash connected with a white Phoenix buckle.

From here, Jean journeys into the Dark Phoenix Saga and tangles with the Hellfire Club along with the Shi’ar Empire. A story for another day.

But it is this suit that Artist Datrinti uses to show off his mock up of Jennifer Garner as Jean Grey.

Datrinti shared the mock up to Instagram where he wrote, “Jean Grey commission by Sealongingheart with Jennifer Garner clean version.”

Here’s a better look at the other two images. 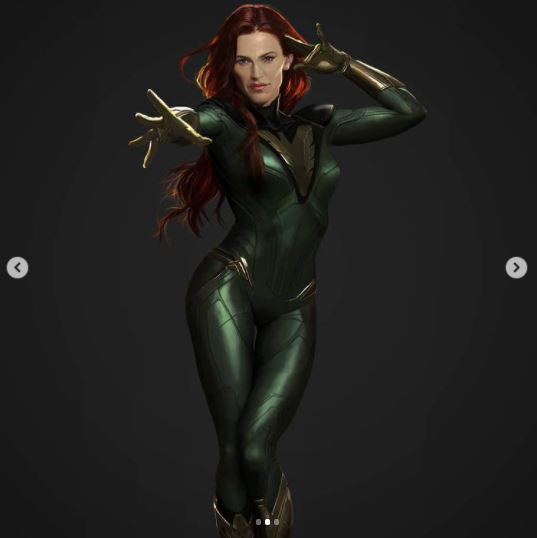 And the last one where Jennifer Garner is on fire as Jean Grey! 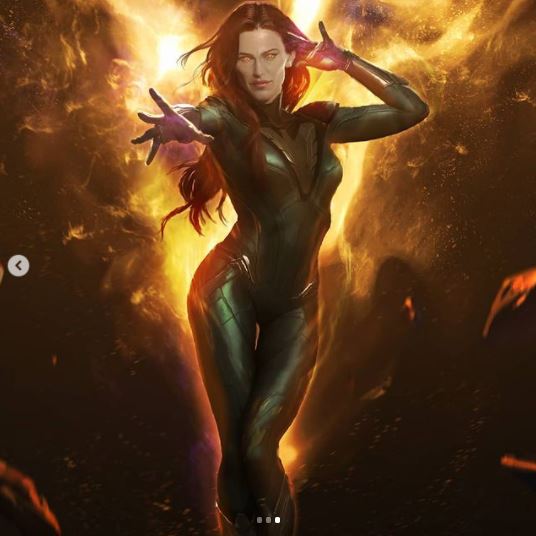 Garner is no stranger to Marvel properties, the actress previously portrayed Elekta Natchios in the 2003 Daredevil film and the subsequent standalone Elektra movie in 2005.

Datrinti has multiple membership levels that give you access from everything to work in progress images, an exclusive Discord chat, as well as prints including a Batman Team print.

What do you make of Datrinti’s mock up of Jennifer Garner as Jean Grey? Would you want to see her as Jean Grey in the Marvel Cinematic Universe?