LaVorgna has written numerous articles for StarWars.com with her most recent being published in September 2020 titled ‘Empire at 40 | The Evolution Of Costumes In Star Wars: The Empire Strikes Back.”

As reported by Itchy Bacca at Disney Star Wars Is Dumb, LaVorgna accused both Itchy Bacca and Van Sciver of abuse before calling for them to be deplatformed. On top of that she also called Star Wars fans racists.

LaVorgna wrote on Twitter, “Nothing’s going to change until people like I*t*c*h*y and E*V*S (who’ve hurled abuse for YEARS) are deplatformed.”

The Star Wars writer then added, “And nothing’s also going to change until certain parts of fandom also have to confront their own racism. This crap has gone on for far too long.” 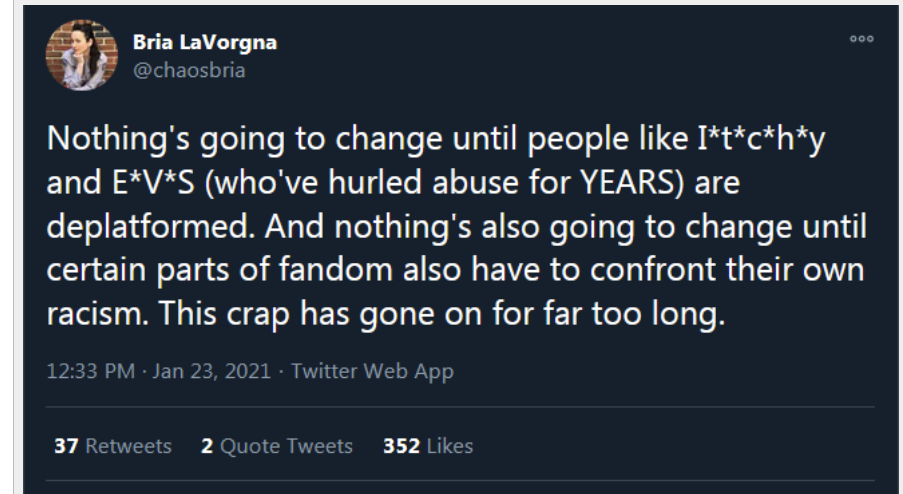 LaVorgna’s view that Star Wars fans are racist and that both Ethan Van Sciver and Itchy Bacca need to be deplatformed was also echoed by her fellow Star Wars writer Bryan Young.

Young has also written for StarWars.com in the past, although he hasn’t written for the website since April 2019. More recently, he’s been writing for SyFy Wire.

Young responded to LaVorgna’s accusations against Itchy Bacca and EVS and her call to deplatform them by writing on Twitter, “I think you’re absolutely correct here.”

Ethan Van Sciver would react to the accusations on his YouTube channel Comic Artist Pro Secrets, which along with Bounding Into Comics was added to a ban list on the Saltier Than Crait subreddit.

Van Sciver begins his video stating, “I have never seen such nitwits, nincompoops, ne’er do wells, and complete and total nerds as the ones who have taken over Star Wars, who are working for Lucasfilm right now and are running this franchise into the ground.”

He continues, “You can’t hurt me anymore in any other way except but for deplatform me. Deplatforming means taking away my means from speaking to you guys. I speak the truth to you guys.”

Still later in the video Van Sciver says, “The only thing standing between the complete and utter annihilation of Star Wars in terms of it being transformed into just a corrupt, progressive, soy-based, disgusting hell hole is me and Itchy. We are it.”

He goes on, “The battle station isn’t fully quite operational. The soy battle station. But if they can only get rid of me. If they can only shut me up then maybe it could. They need to deplatform me. Take away this channel, here. This channel that you guys enjoy and that I certainly enjoy. I love my YouTube channel.”

“They need to take it away so that they can fully implement their corrupt and disgusting soy-based ideas and do it with impunity,” Van Sciver continues.

He added, “These disgusting, rancid, little soy lactating perverts want to take away my YouTube channel so that they can make Star Wars even more lame.”

Itchy Bacca would also respond to the call to deplatform him. On Disney Star Wars Is Dumb, he wrote, “People sometimes ask why it is that censorship is such a common tool for the fringe left. Well, it’s because SJWs are fully aware that their deeply moronic ideology is incapable of withstanding debate in an environment of free speech.”

He concluded, “Silencing their political opposition is the only intellectual option that is available to them.”

What do you make of these Star Wars writers accusing Ethan Van Sciver and Itchy Bacca of abuse and then calling for them to be deplatformed?