If you are unfamiliar with Ganyu, she’s one of Genshin Impact’s more recently released playable characters. In fact, she was released on January 12, 2021. She’s voiced by Jennifer Losi in English and UEDA Reina in Japanese. 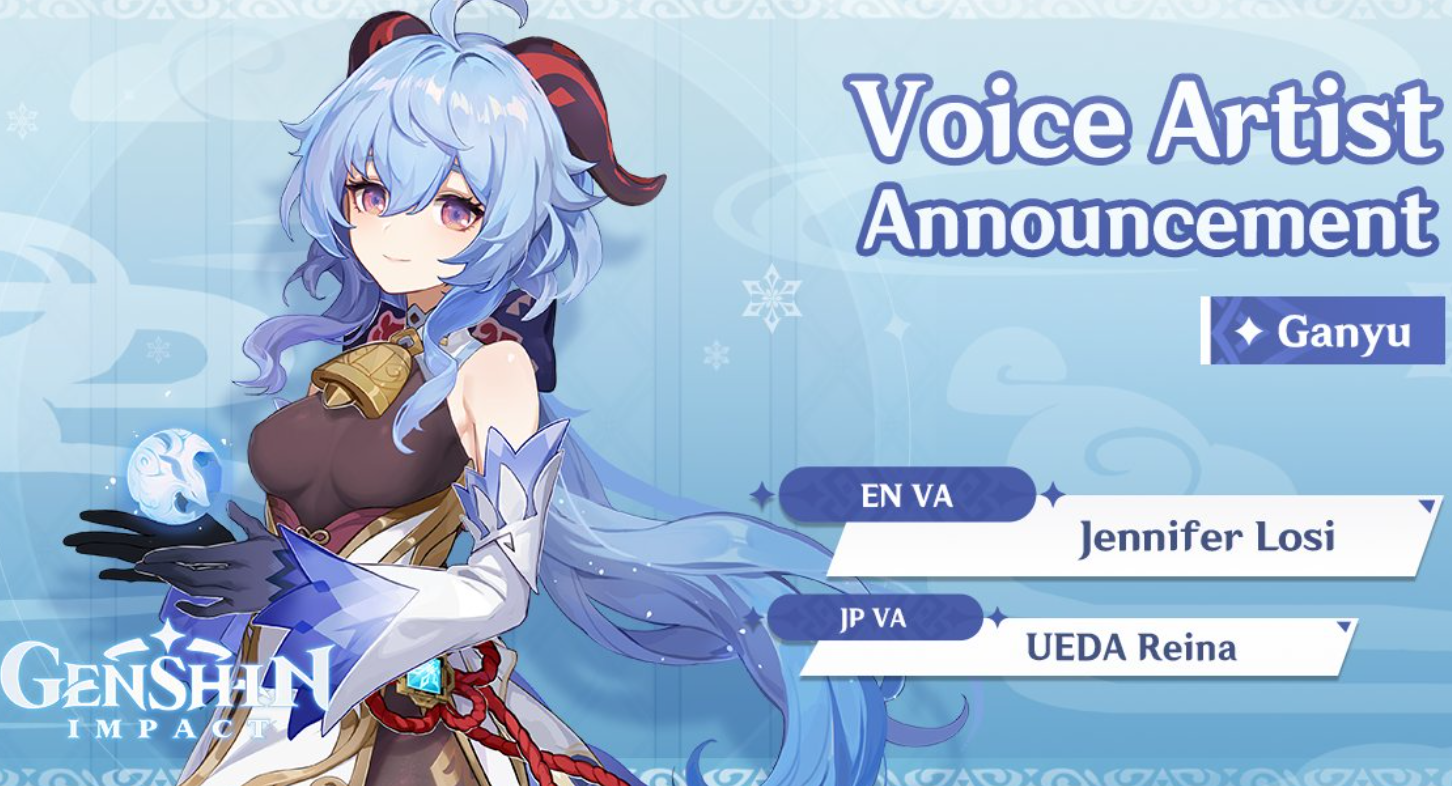 She was born on December 2nd and is a Cryo Vision user with her constellation being the Sinae Unicornis. She wields as a bow as her weapon.

Using the bow in combination with her Cryo Vision, she is able to fire off Frostflake blows that upon impact deal AoE Cryo damage. Her elemental skill is called Trail of the Qiln. It allows Ganyu to summon an Ice Lotus that taunts nearby opponents.

Finally, her elemental burst is called Celestial Shower. Ganyu summons a Sacred Cryo Pearl that exorcises evil. The Sacred Cryo Pearl summons down shards of ice that deal Cryo damage to enemies caught within its range.

Aside from being a playable character and joining The Traveler on his or her journey throughout Teyvat, Ganyu serves as the secretary at Yuehai Pavilion for the LiyueQixing.”

A brief description of her from in-game reads, “The secretary at Yuehai Pavilion. The blood of the qiln, an illuminated beast, flows with her veins.” 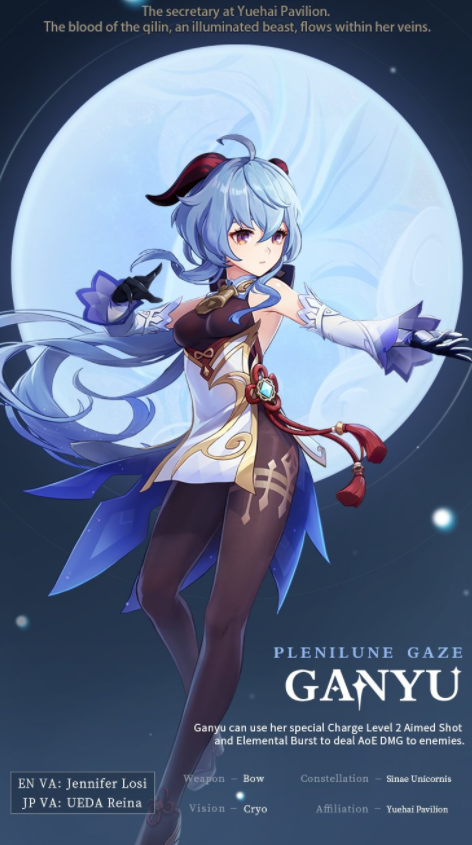 More specific character details explain, “Though many in Liyue are fascinated by life in Yujing Terrace, it’s day-to-day operations and rules are a mystery to them. They are aware that the Liyue Qixing are the cream of the crop who hold the fate of the city in their hands, but the calculations and data behind the Qixing’s every decision are far harder to grasp.”

It continues, “The people understand that the new policies announced each year will change the dynamics of the market, yet none can comprehend how policy is plucked from complex meeting minutes and comprised into something easier on the human eye.”

“As the secretary of Yuehai Pavilion, Ganyu undertakes many tasks that ordinary folk do not see. For those that have witnessed her standing by the dock at daybreak, enjoying her breakfast in silence, it is difficult to imagine her in such a post. Even still, by the time the sun has fully risen, she will have returned to Yuehai Pavilion overlooking Yujing Terrace, to continue to fulfill her contract. A contract that she signed three thousand years ago with Rex Lapis,” it adds.

In Ganyu’s Character Story 1 it reveals that she’s not just the secretary of anyone on member of the Liyue Qixing but is the general secretary for the entire group.

The description begins, “Ganyu is not the secretary of any one leader in the Liyue Qixing but is instead the general secretary for the entire organization. Under her gentle exterior, Ganyu is as persevering as stone itself. This was something that Rex Lapis, the leader of the adepti, noticed very early on. Thus when the Liyue Qixing first emerged ages ago, Ganyu was their secretary.”
“Through the years and the changes in the Qixing’s roster, Ganyu has remained by their side as a constant. This has also meant that the mountainous piles of paperwork from the various departments and bureaus in Liyue have fallen upon Ganyu’s shoulder. But though her workload has increased seven, a hundred, or even a thousandfold, her sense of responsibility has never wavered.”

Someone once queried as to the source of her motivation and received an answer that was not quite congruous with the question. ‘What I’ve done…is nothing compared to what Rex Lapis has accomplished.'” 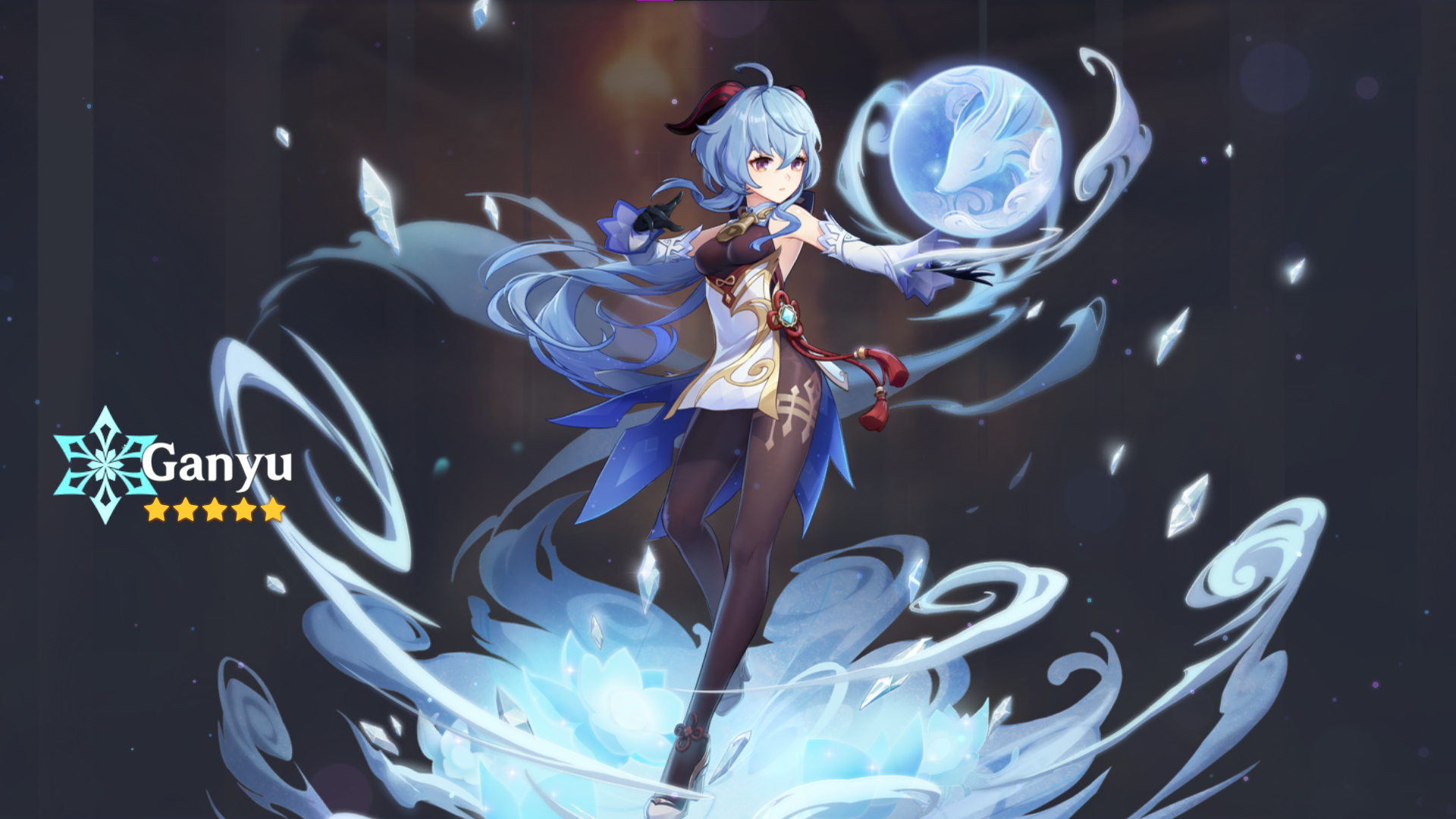 In her Character Story 2, it is revealed that Ganyu is a perfectionist. It explains, “The more important, the matter, the more Ganyu strives for perfection, and the more nervous she becomes.”

Given her immense workload, she’s also a workhorse. It details, “Under almost all circumstances, Ganyu is a very trustworthy secretary. It is hard to imagine anyone outperforming her in the face of such an enormous workload, especially given her unique and penetrating insights into all of Liyue’s matter.”

In Character Story 3, Ganyu’s half qiln, half human ancestry is discussed. It states, “All this time, her mindset has never changed – she constantly wavers between her human and adeptus halves. On one hand, Ganyu the qiln finds it difficult to comprehend mortal squabbles. But on the other hand, her human blood reminds her always to hold out hope that she might someday be able to fit in.”

Ganyu has also very particular habits specifically, “she has a habit of taking afternoon naps and has a shockingly accurate internal clock. When lunch hour arrives, not matter where she is, she will simply curl up into a ball and fall asleep on the spot.” 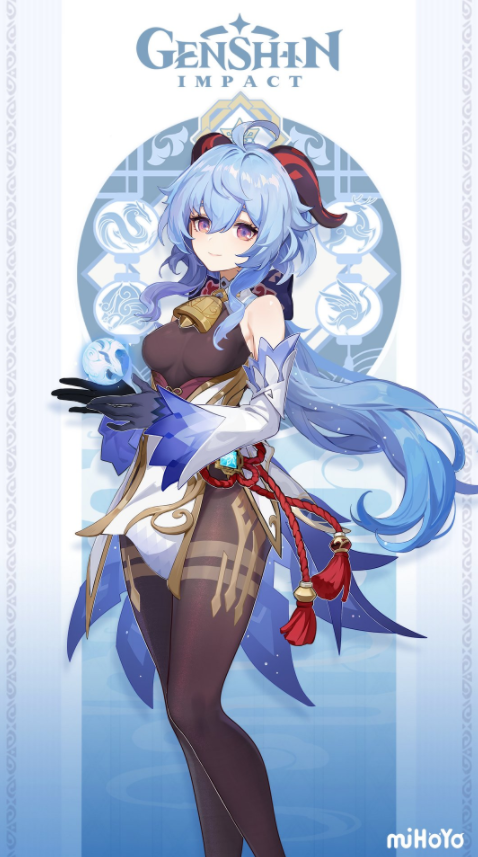 As for her appearance, Ganyu is a short woman with purple eyes and long blue hair that goes down to her butt. On the top of her she has a pair of red horns. She wears a golden bell around her neck.

For her outfit she wears a black body-suit with gold designs on her thighs, The bodysuit connects at the back of her neck to form a bow with red and gold accents.

Over top of the body suit she wears a white and blue bodice that matches her hair color. It too is accented in gold. On her hip she wears her Cryo Vision that enclosed in a red cloverleaf knot. She also sports white heels with red knots. 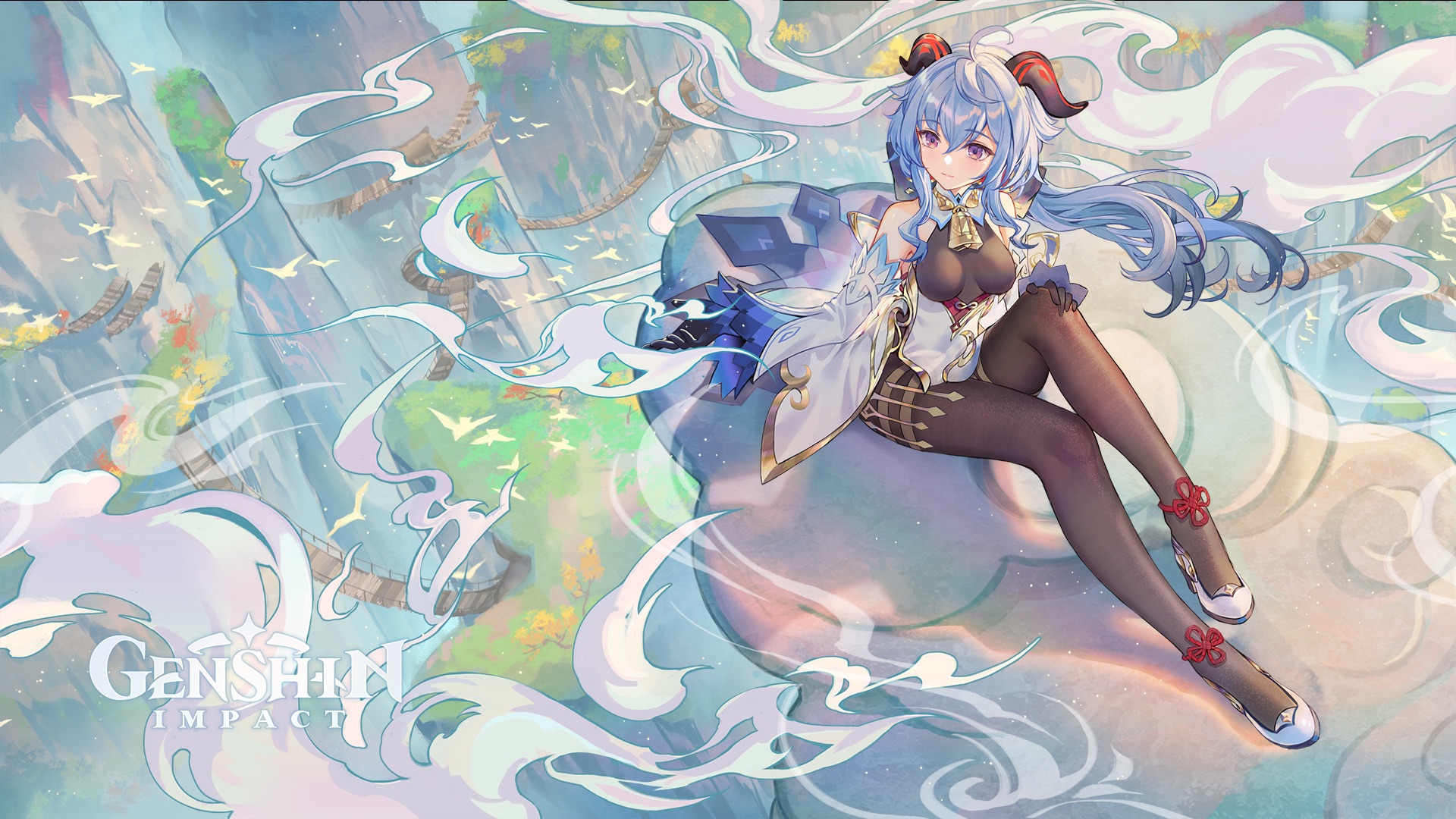 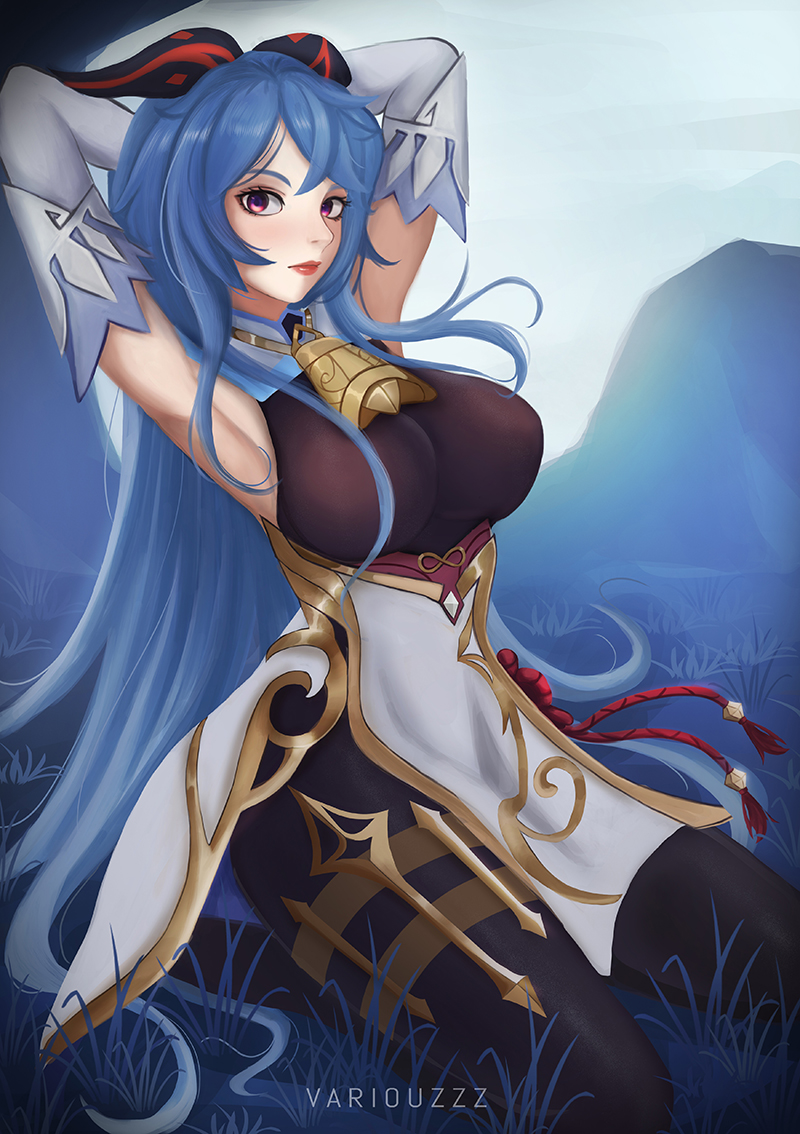 Ganyu is not the only Genshin Impact character Variouzzz has put his talents too.

Variouzz previously revealed a pinup of the Acting Grand Master of Mondstandt’s Knights of Favonious Jean. 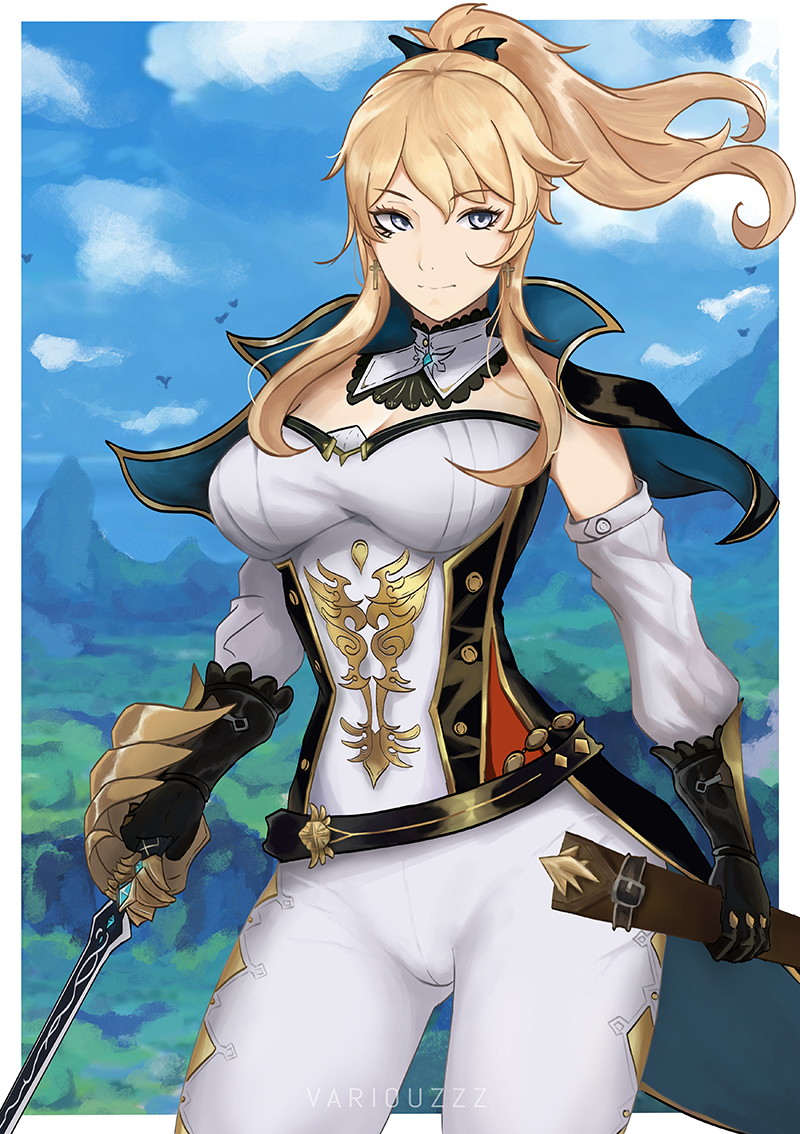 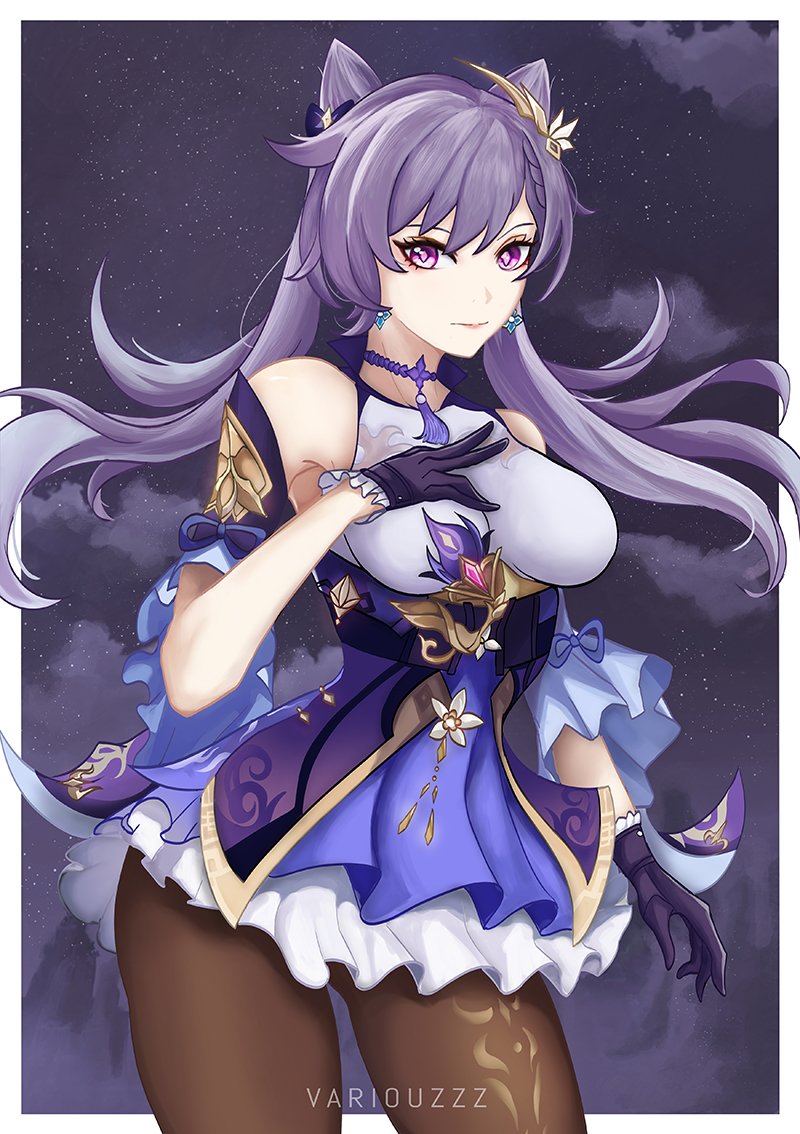 Finally, the artist also shared a pinup of Mona.

And here’s a better look of Mona. 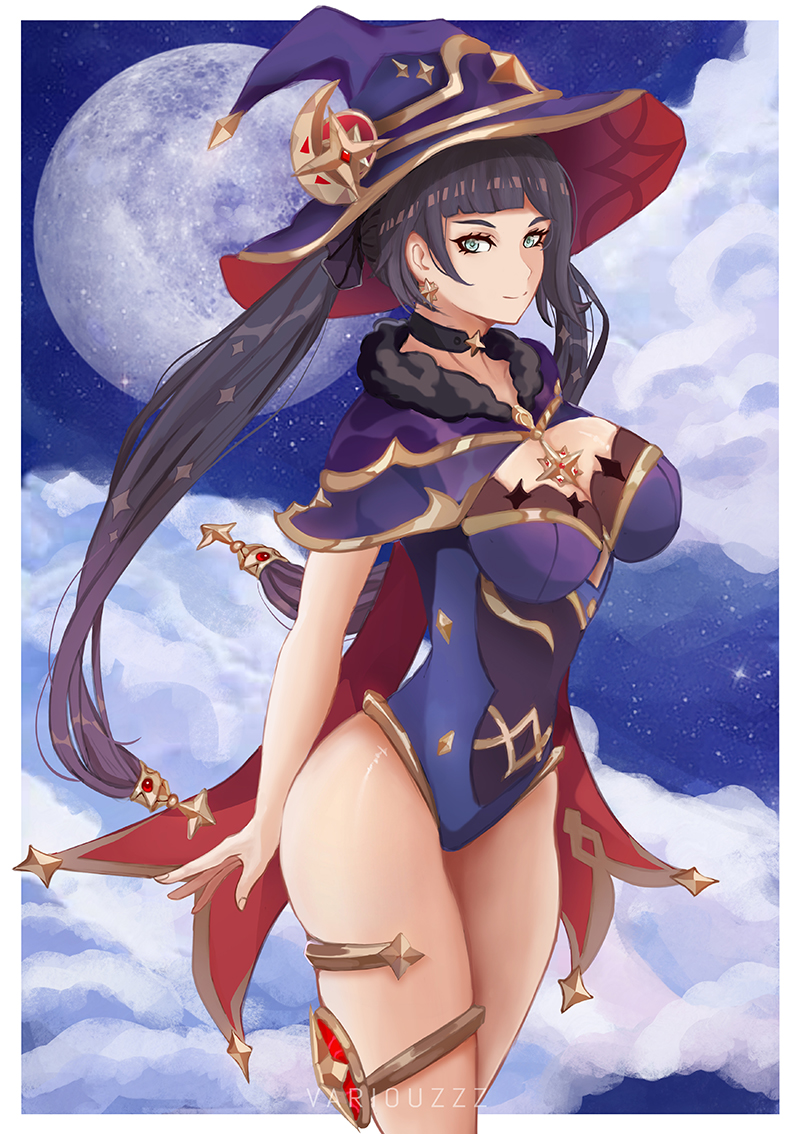 You can support Variouzzz on Gumroad.

What do you make of Variouzzz’s Ganyu pinup? Which Genshin Impact pinup is your favorite?