The latest entry in Lucasfilm’s Star Wars: The High Republic publishing initiative is Claudia Gray’s Into The Dark novel, which appears to approve of Jedi having one night stands or at the very least participating in casual sex.

An excerpt from the novel reveals a conversation between Jedi Padawan Reath Silas and the Byne Guild member Affie Hollow.

The conversation between the two begins with Affie asking Reath about the Jedi. She says, “So, okay, tell me what the Jedi are in two sentences or less.”

Reath begins by asking if Affie knows what the Force she is. She responds, “Everybody knows about the Force, come on.” 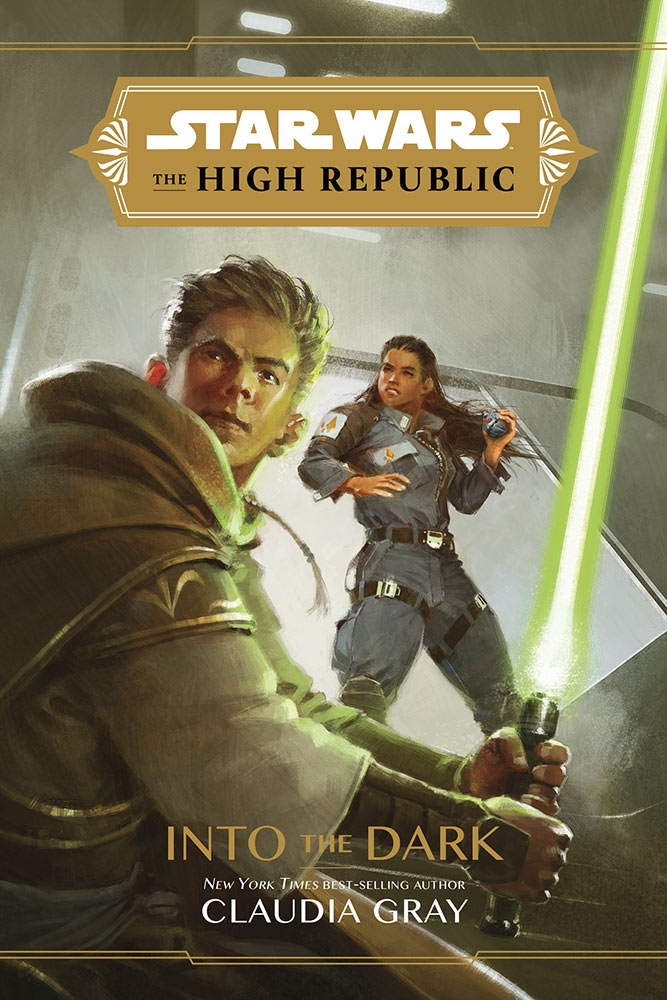 With that information, he then begins to describe the Jedi, “So, the Jedi are Force users united in our quest to understand the mysteries of the Force and to serve as guardians of peace and justice throughout the galaxy.”

Affie responds, “I’ve heard of Force users before. But why does that make you monks?”

Reath responds, “I still have one sentence to go. Um, we ground ourselves in a spiritual existence and give up individual attachments in order to focus entirely on greater concerns.”

Affie then says, “So, that means no sex.”

Following this, Reath ponders to himself, “Should he give her Master Jora’s whole speech about the difference between celibacy of the body and true purity of the heart? It was a very long speech. Reath decided to skip it.” He then responds to Affie saying, “Basically.” 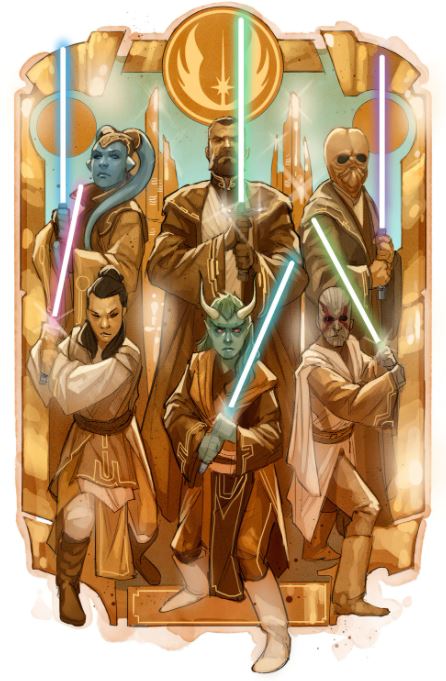 The conversation would continue when Leox Gyasi was told about the Jedi. Gyasi stated, “Now, see, that I just don’t get. How are you supposed to prove love to the galaxy at large if you don’t know how to love any one individual person?”

Affie would respond, “You don’t have to have sex with someone to love them. You should know that if anyone does.”

Gyasi then said, “Indeed I do. But other beings seem to value copulation as a form of bonding.”

The implication of Reath’s thoughts about Master Jora’s speech indicate that the Jedi approve of casual sex as long as they don’t form an attachment.

Fortunately, Star Wars and George Lucas has addressed much of this before The High Republic was even conceived.

In Star Wars Episode II: Attack of the Clones, Padme Amidala is being escorted back to Naboo by Anakin Skywalker when she asks him, “Are you allowed to love? I thought that was forbidden for a Jedi.”

Anakin responds, “Attachment is forbidden. Possession is forbidden. Compassion, which I would define as unconditional love, is essential to a Jedi’s life. So you might say that we are encouraged to love.”

By the end of the Attack of the Clones, Padme and Anakin would get married, although they would keep it a secret from the Jedi Council and their closest friends such as Obi-Wan Kenobi. 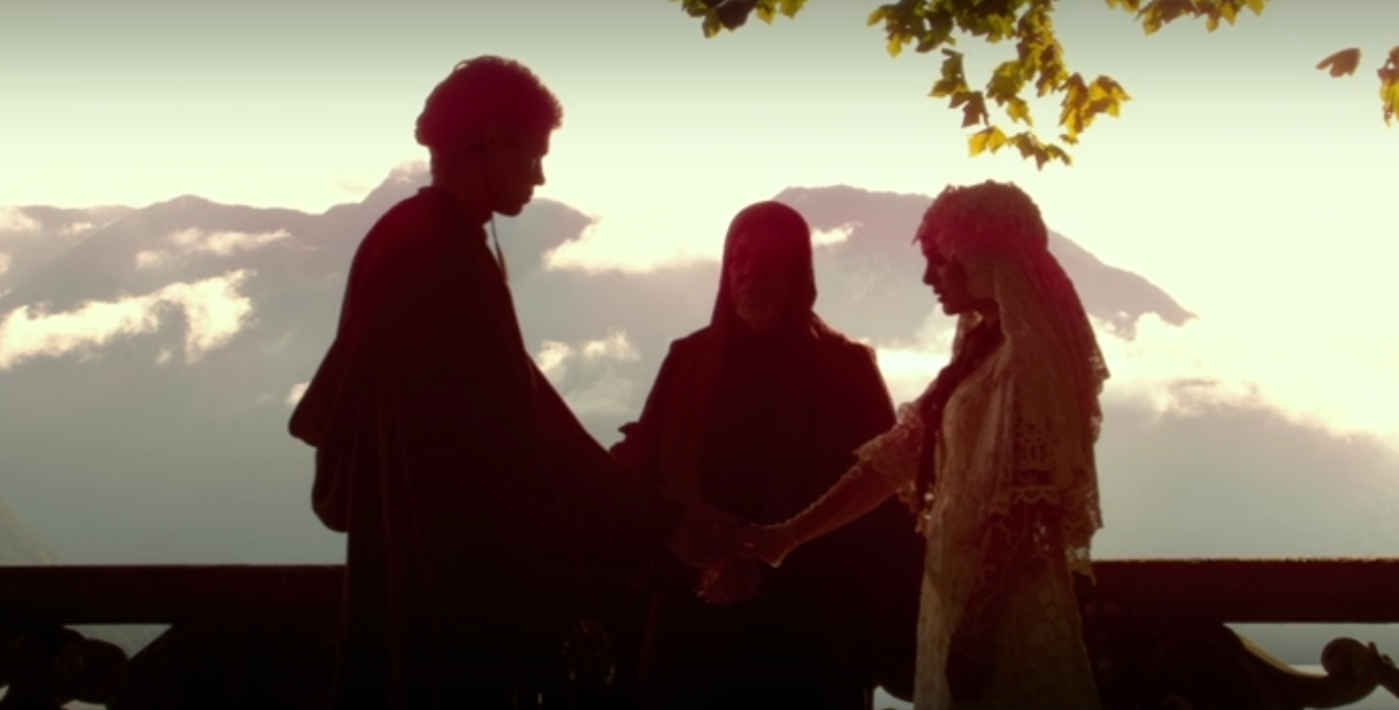 Back in August 2010, George Lucas would also address the Jedi and their sexual proclivities.

At around the 40 minute mark in the video below, Lucas was asked about the Jedi by James Stewart. Stewart asked, “Is the idea of the Jedi as kind of a priest, but they can channel that Force through them. They can actually utilize it.”

Lucas responds, “It’s the monk idea. Whether you go to the Christian monk, the Knights Templar or you go to the Buddhist monks, Kung Fu monks. You get a warrior monk. And the idea with Star Wars is that the monks really aren’t warriors, they are negotiators. They are just the mafia.”

He continued, “As Teddy Roosevelt would say, they negotiate disputes between planets between things. They aren’t like policeman or anything. But they negotiate with a big stick, with a big lightsaber. So if you don’t sort of come to a conclusion with your dispute with each other, they will settle it for you.”

Stewart then asked, “Was there any reason why they couldn’t get married? Was that the emotion of it or the idea that they loved something…”

Lucas responded, “The whole idea of the movie, ultimately is that you have the Light Side and the Dark Side. The Light Side is compassion, which means you care about other people. The Dark Side is you care only about yourself. And you are obsessed with yourself. Getting your pleasure and getting all your stuff. The other one, you give it to everybody. You give goodness and health to everybody else.”

Lucas detailed, “I mean they can protect them as you would ordinary protect, you know, ‘Get out of the way of that car.’ Somebody charges you with a gun, you knock the gun out, but there is an inevitability to life which is death and you have to accept that.”

“And this is a mythological idea that goes way back to Hades, where once you get power, it corrupts you. So, if you say Anakin. He fell in love with Padme then became possessive of her. He got jealous and all those things. Then when he found out that she was going to die, he would do anything to stop that from happening even to the point of making a pact with the devil to say, ‘Give me the power to save my wife and I’ll do your biding,'” he went on.

Lucas continued to describe Anakin’s downfall,  “Well, he got the power to save his wife, but in the process he became powerful and the key to it, he said, ‘Okay I can save you from dying. I can even rule the universe.’ Everybody who gets the power wants to run the universe. They all want to be the Emperor.”

He then detailed that’s the reason why there are only two Sith, “That’s why there’s only two Sith. There used to be a lot of them, but they all killed each other off. Because they were all fighting over who got to [rule.] So it was always one Sith lord and one apprentice. And the apprentice was always plotting to get somebody else to join him, ‘Hey! You and me get together and we go and kill the Emperor.’ So they are always doing that.”

Lucas added, “So when Anakin said, ‘Well, I’m powerful now. I’m even more powerful than Palpatine. I can take over the universe and it will be the way I want it to be.’ And of course Padme says, ‘My God! Your not the person I fell in love with. I don’t love you anymore.’ And he lost everything.”

Stewart then responded, “What I take from that is Jedi can’t have one night stands.”

The conversation regarding Jedi and marriage ends as Stewart changes the topic and discusses Darth Plagueis. 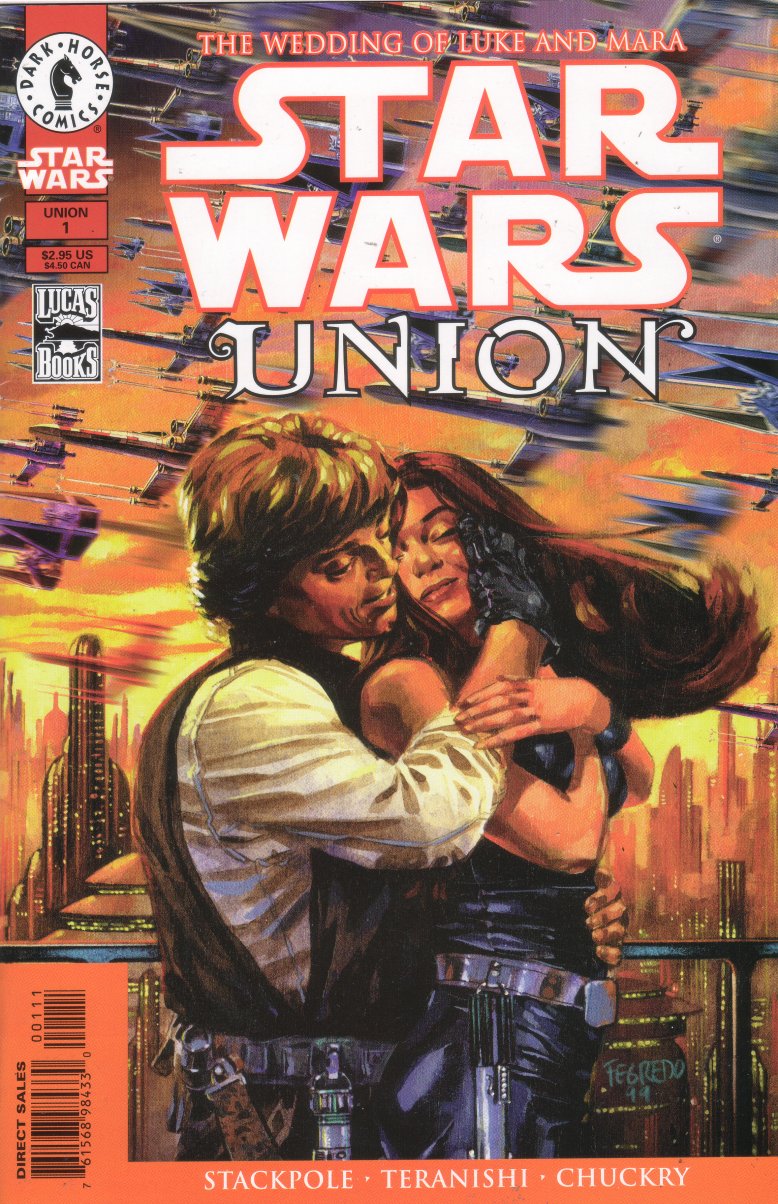 Now, this is still a complicated answer, and I’m not sure Lucas fully explained the reasoning behind why the Jedi Order would ban marriages.

In fact, it’s possible that Anakin’s resentment of the Jedi way of life was fostered by their ban on marriage, which he saw as opposed to their actual teachings.

Also, when Lucas is discussing why Jedi give up marriages, it doesn’t appear he’s actually talking about a marriage. A marriage is not about possessing other people. It’s not about owning them or even demanding they do things for you.

Since Lucas brought up the Knights Templar, a Catholic order of knights founded in 1119, the Catechism of the Catholic Church teaches, “God who created man out of love also calls him to love the fundamental and innate vocation of every human being. For man is created in the image and likeness of God who is himself love. Since God created him man and woman, their mutual love becomes an image of the absolute and unfailing love with which God loves man.”

The Catechism teaching continues, “It is good, very good, in the Creator’s eyes. And this love which God blesses is intended to be fruitful and to be realized in the common work of watching over creation: “And God blessed them, and God said to them: ‘Be fruitful and multiply, and fill the earth and subdue it.'”

As you can see marriage is about the unconditional love and compassion that Anakin refers to in the Attack of the Clones.

However, it’s possible that the Jedi Order prohibits marriage in order to avoid the temptation of falling to the Dark Side, where one might try to own, possess, or demand things of other people as Anakin eventually did with Padme.

As for The High Republic’s insinuation that casual sex and one night stands would be accepted among the Jedi, it seems pretty clear in Lucas’ explanation that the Jedi would prohibit that as well as even Stewart came to that conclusion.

In fact, they would probably be more emphatic about prohibiting casual sex among those members as it would certainly foster a belief of owning, possessing, or demanding things of their partners. It also could more easily lead to feelings of jealousy and a desire for control. 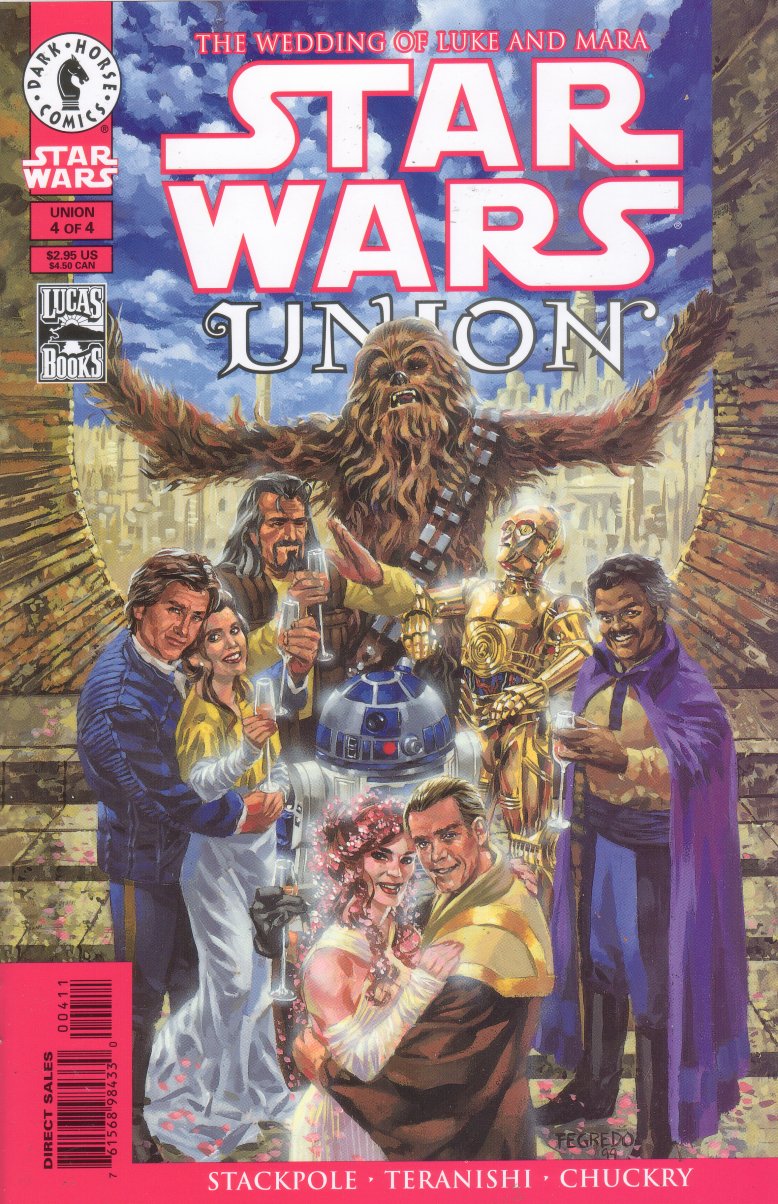 Interestingly enough, Dark Horse Comics would publish Star Wars: Union, where Luke Skywalker marries Mara Jade in 2000, following the release of The Phantom Menace and just before Attack of the Clones.

One might think given Skywalker, who has formed a New Jedi Order, the prohibition of marriage was found faulty and thus marriage was embraced by Luke and the Jedi going forward. 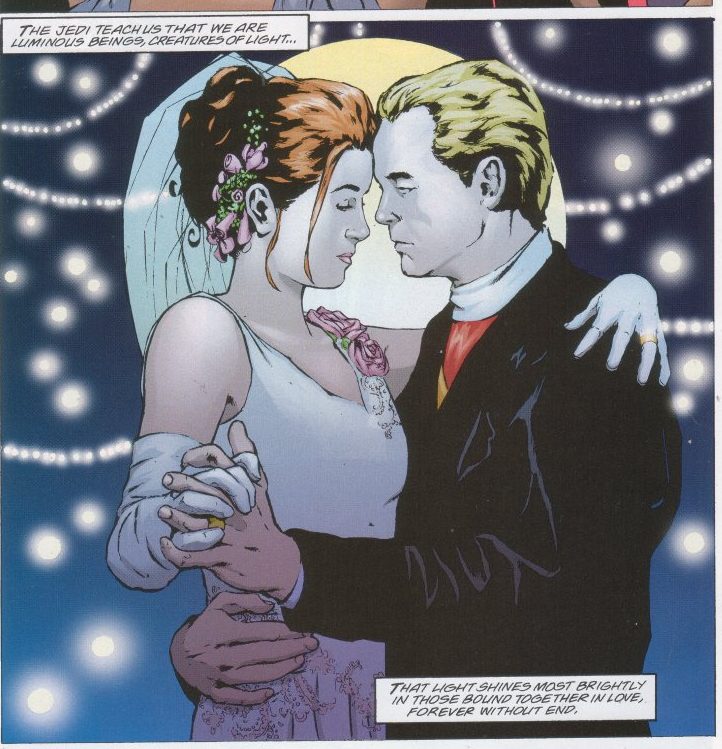 Lucas had other ideas. In a 2008 interview with Total Film, which took place before his appearance at Celebration V, Lucas would also reveal his displeasure at the fact that Luke Skywalker marries Mara Jade in the Extended Universe.

He stated, “I’ve left pretty explicit instructions for there not to be any more features. There will definitely be no Episodes VII-IX. That’s because there isn’t any story.”

He added, “And now there have been novels about the events after Episode IV, which isn’t at all what I would have done with it. The Star Wars story is really the tragedy of Darth Vader. That is the story. Once Vader dies, he doesn’t come back to life, the Emperor doesn’t get cloned and Luke doesn’t get married…” 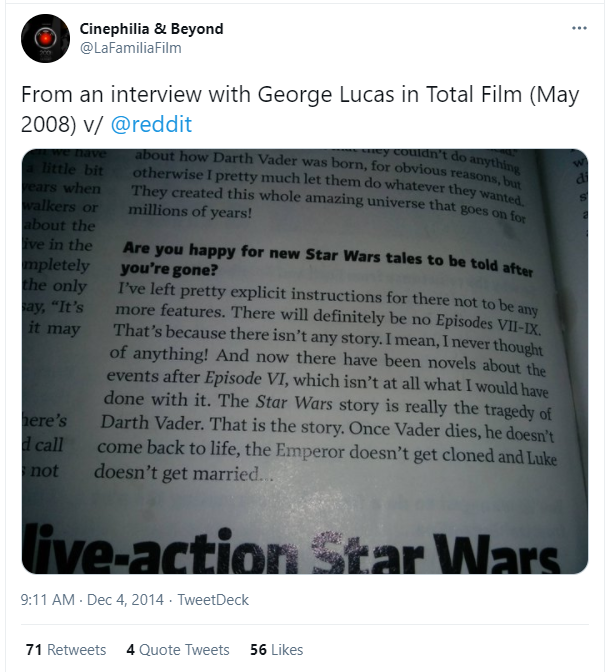 So, there is still a mystery about the Jedi prohibition on marriage and what Lucas’ plans would be regarding marriage when Luke began his work of rebuilding the Jedi.