YouTubers roasted Star Wars head Kathleen Kennedy for her virtue signaling and hypocrisy after the Oscars YouTube channel uploaded a video of Kennedy praising various women for their scientific and technical achievements in filmmaking.

As you can see in the video below, after praising a number of women for receiving a Science and Technical Award, Kennedy states, “More barriers to break? More progress to be made? Yes, of course. But the story of women innovators making movie magic, their story isn’t ready to fade out, not even close.”

She would later state, “And women are helping to redefine science and technology in the movies. And that means a brave, bold future without limits for each and every storyteller.”

The video currently has been viewed just over 24,000 times and has over 6,000 downvotes with only 72 upvotes. 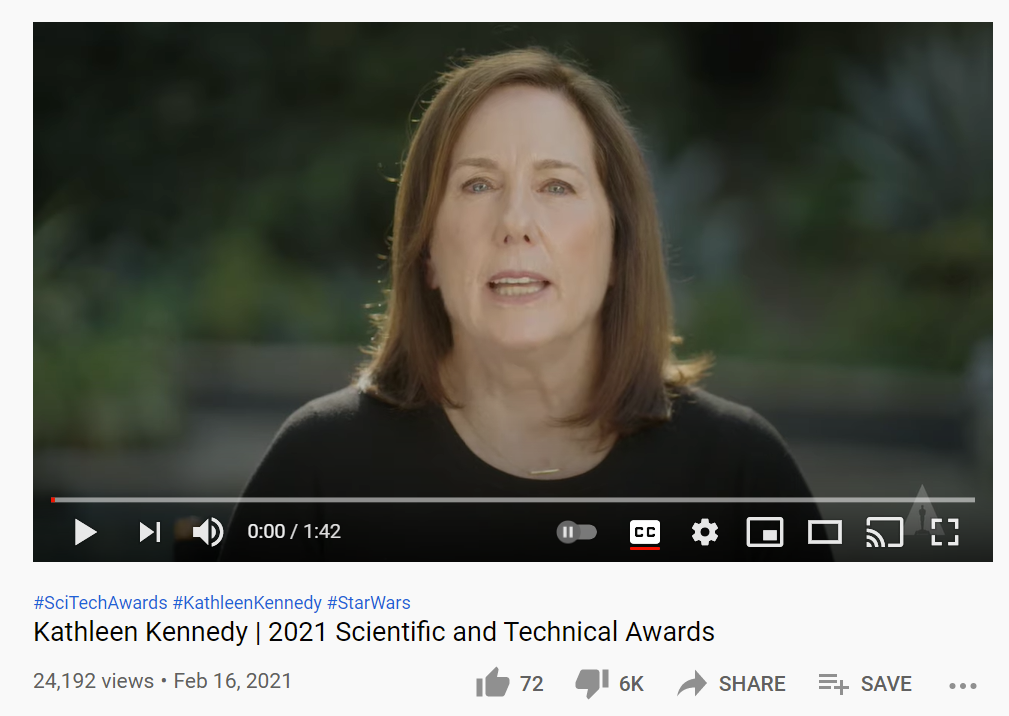 In the comments multiple YouTubers unloaded on Kennedy for her hypocrisy.

Mike Kelly wrote, “Lmao the industry that created the casting couch and treats woman like objects, are now giving morality lessons, f you kk, fade out.”

Barbi Bishop wrote, “JUST HERE KEEPING A TAB ON THE DISLIKES RATIO – BET THEY WILL “ADJUST” IT ACCORDINGLY – GOTTA KEEP HITTIN THOSE DOWNVOTES ! FADE OUT.”

Stacey A. added, “Disgusting hypocrisy. Gina Carano has more integrity, honesty and conviction in her little finger than the rest of Lucasfilm has put together as a collective.”

“Get your politics out of my movies. Bring back Gina Carano,” said SC Webb.

RWB 6280 wrote, “Bad choice in choosing KK to make this statement. She just fired and is trying to cancel one of the most popular and beloved actresses in the world today. #weloveginacarano #firekathleenkennedy”

“This is rich coming days after firing Gina Carano for her political opinions. Kennedy is a Hollywood hack,” wrote Leia.

It wasn’t just in the comments.

YouTuber Ryan Kinel unloaded on Kennedy, “Female empowerment… You are a big part of that weren’t you, Kathleen Kennedy. Making sure that women get their do, putting all of these different women in these positions.”

He continued, “But as soon as one of them speaks out of line. As soon as one of them shares an opinion that doesn’t fall in line with the far-left echo chamber of Lucasfilm and Disney, you get rid of her. You fire her because you can’t have a woman that’s too strong or too independent, can you?”

Jeremy from Geeks + Gamers reacted saying, “But what we just witnessed in this video is the exposing of Lucasfilm once again. It almost happens weekly at this point. These people are absolutely horrible people.”

He adds, “Kathleen Kennedy is the worst leader we have ever seen in the history of Hollywood. This woman is terrible. Her lack of self-awareness is off the charts. They don’t even care about their hypocrisy getting exposed anymore.

What do you make of Kennedy getting roasted and the Oscars video getting ratioed?