With his return to mainstream comics continuity, DC has confirmed that the original version of Alan Scott, better known as the Golden Age Green Lantern, is now a gay man. 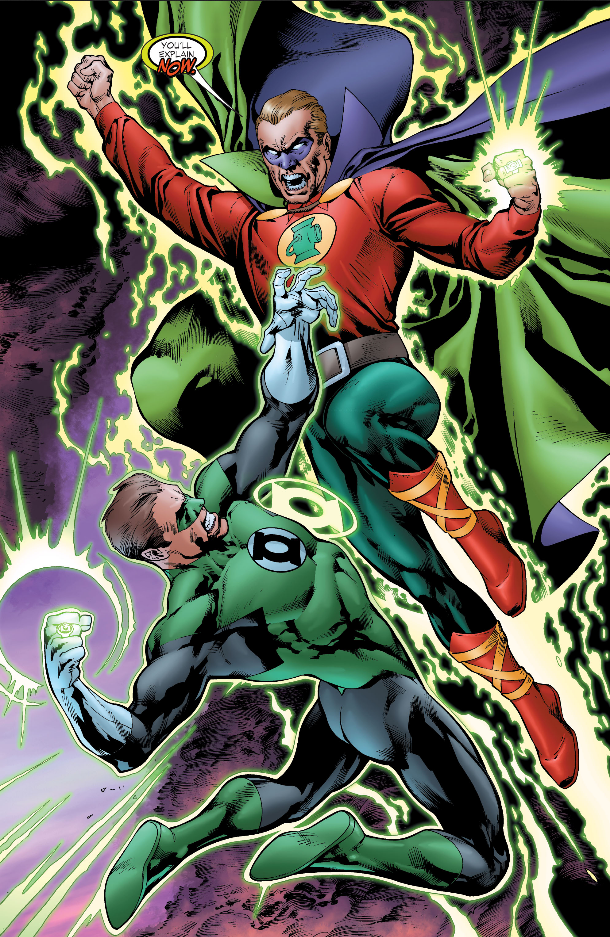 The first character to ever bear the moniker of Green Lantern, Scott was originally introduced in the 1940s, and during his tenure as the magic-based ring slinger, served as both a founding member of the Justice Society of America and the original Earth-2 counterpart to the more well-known Green Lantern Hal Jordan. 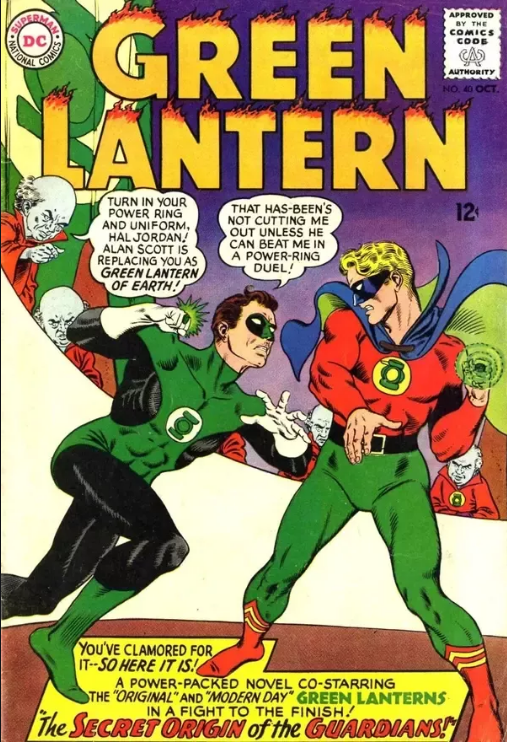 This original incarnation would eventually marry a woman by the name of Rose Canton (unbeknownst to Scott the split-personality of the plant manipulating supervillain Thorn) and father two separate superpowered children.

Born Jennifer-Lynn Hayden and Todd Rice, Scott’s twin children would come to be better known as the Infinity Inc. members Jade and Obsidian. 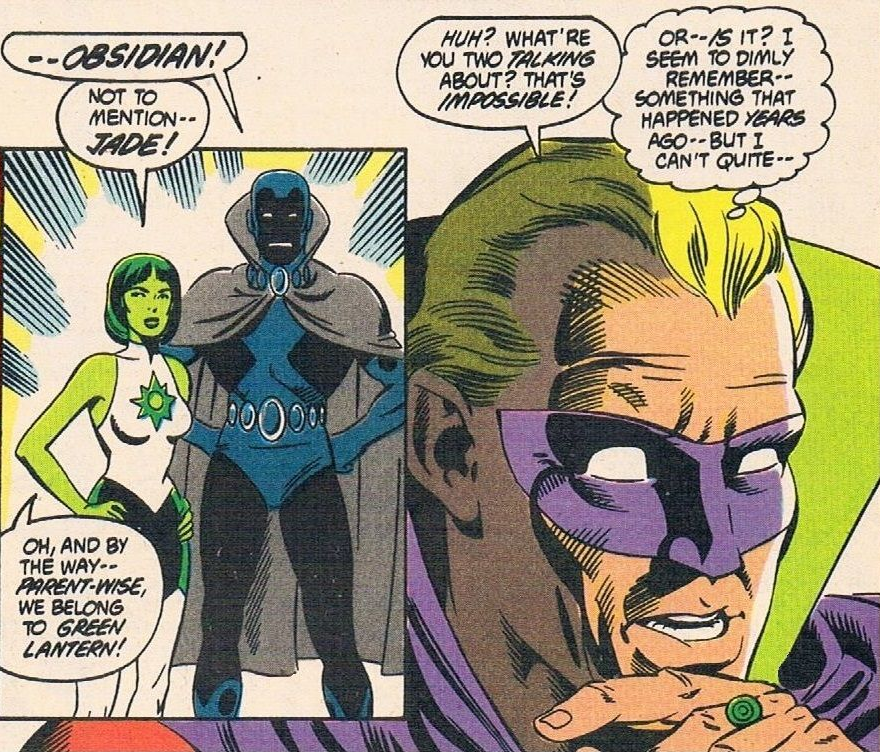 However, in the wake of the continuity altering events of Flashpoint and the launch of the New 52 publishing initiative, Scott was reimagined as gay, with the loss of his boyfriend even serving as one of the catalysts for his transformation into the Green Lantern. 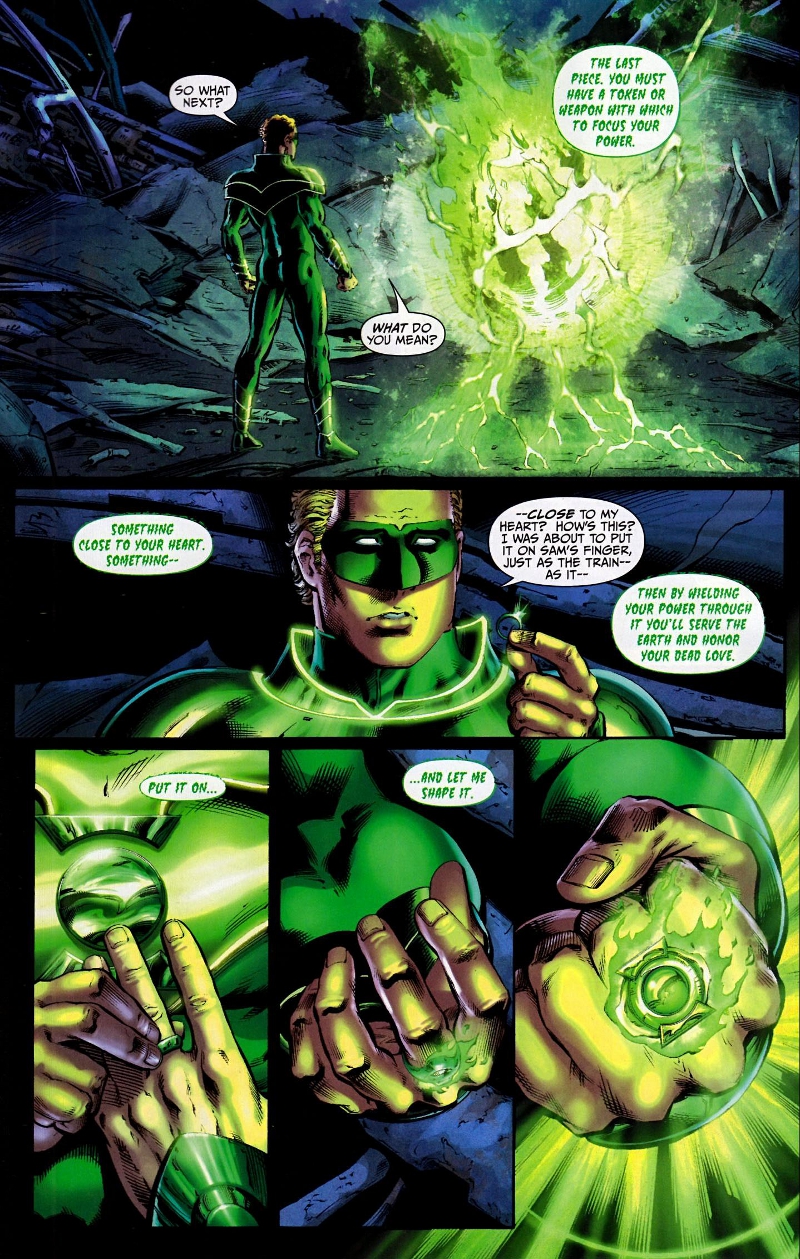 While the original Scott and his New 52 counterpart were previously considered entirely separate interpretations of the same character, DC Comics has now folded the two versions into a single hero, reintroducing the Golden Age Scott to mainline continuity as a gay man.

The retcon occurs in Infinite Frontier #0, a double-sized one shot previewing the direction of DC Comics’ main line for the near future following the aftermath of Dark Knights Death Metal.

Inviting Jade and Obsidian (himself a gay man) to the JSA Headquarters, Scott informs them that despite having been “married a few times to women I did love with all my mind,” he had come to realize that “there was something about myself I was hiding away.” 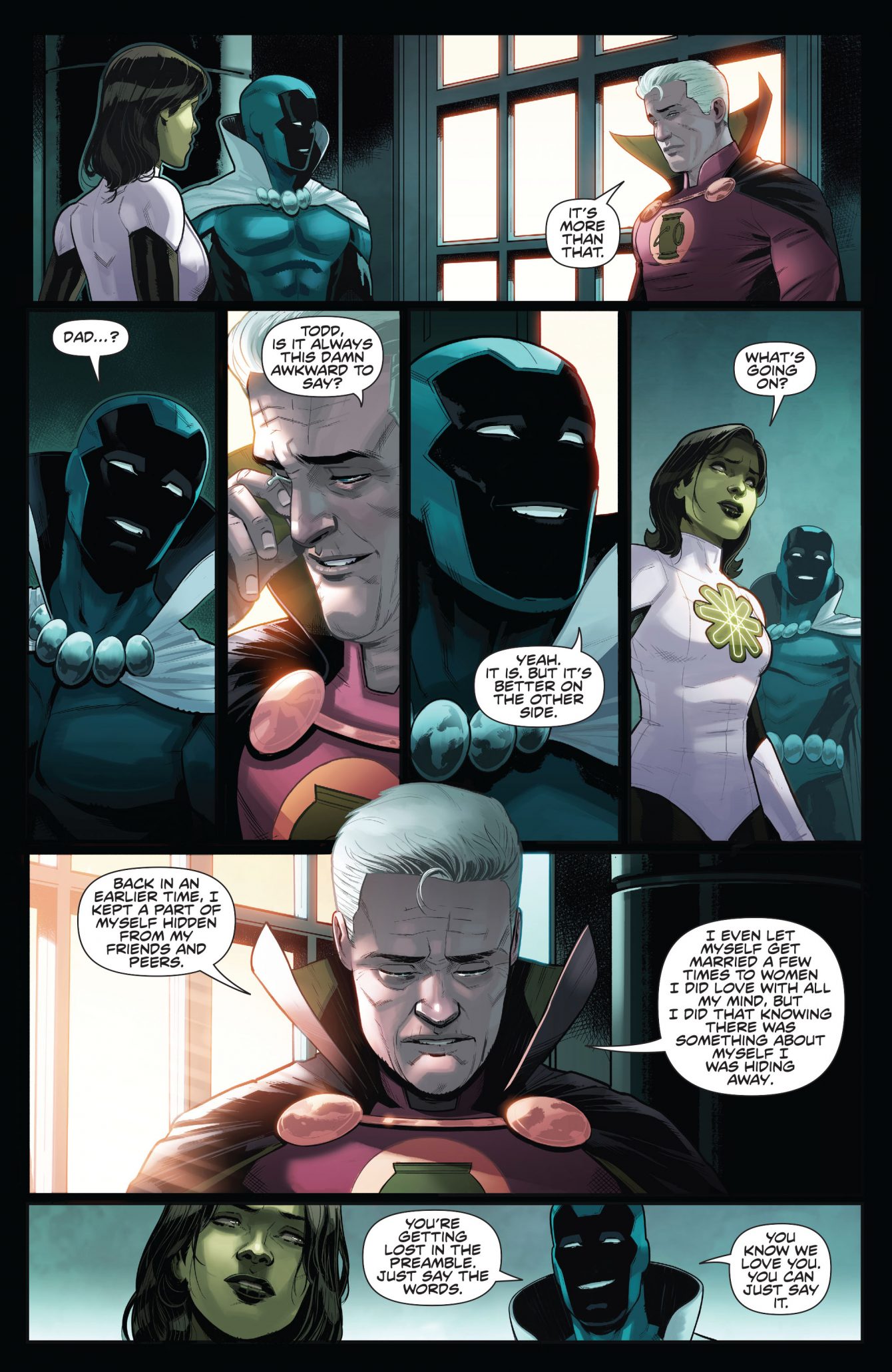 “I’m gay,” Scott bluntly reveals to his children. “I let a few of the boys in the society know back in the day, and I’ve had a good deal of…friends over the years.”

“But some of the greatest minds of this world are looking out at the frontier again, and all that’s possible,” he adds. “They’ve asked me to be a sentinel overlooking the totality of this world. And I didn’t think it would be right to take that job without finally being the whole of myself.”

The page ends with Wonder Woman asserting, “How incredibly brave of Alan.” 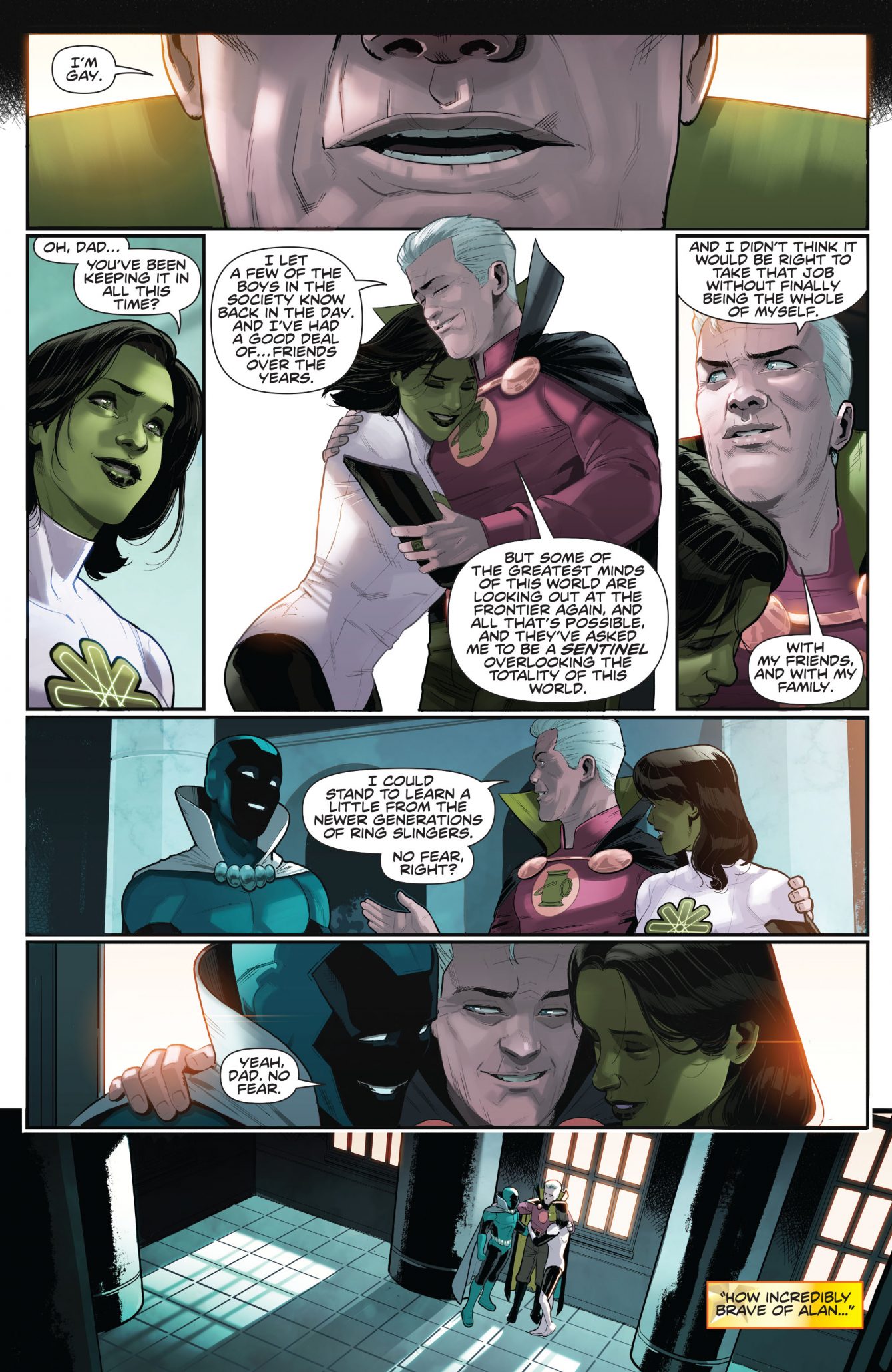 In the issue, Scott speaks with Doris Henton, the mother of a young man named Jimmy, a friend and co-worker of Scott’s who died in a train accident as the result of industrial sabotage. While telling her of her son’s fate, Scott states that he was on the train in order to get “away from myself.”

The next panel shows the silhouettes of Jimmy and Scott’s face close together imposed against a background of smoldering fire, implying a romantic connection between the two men. 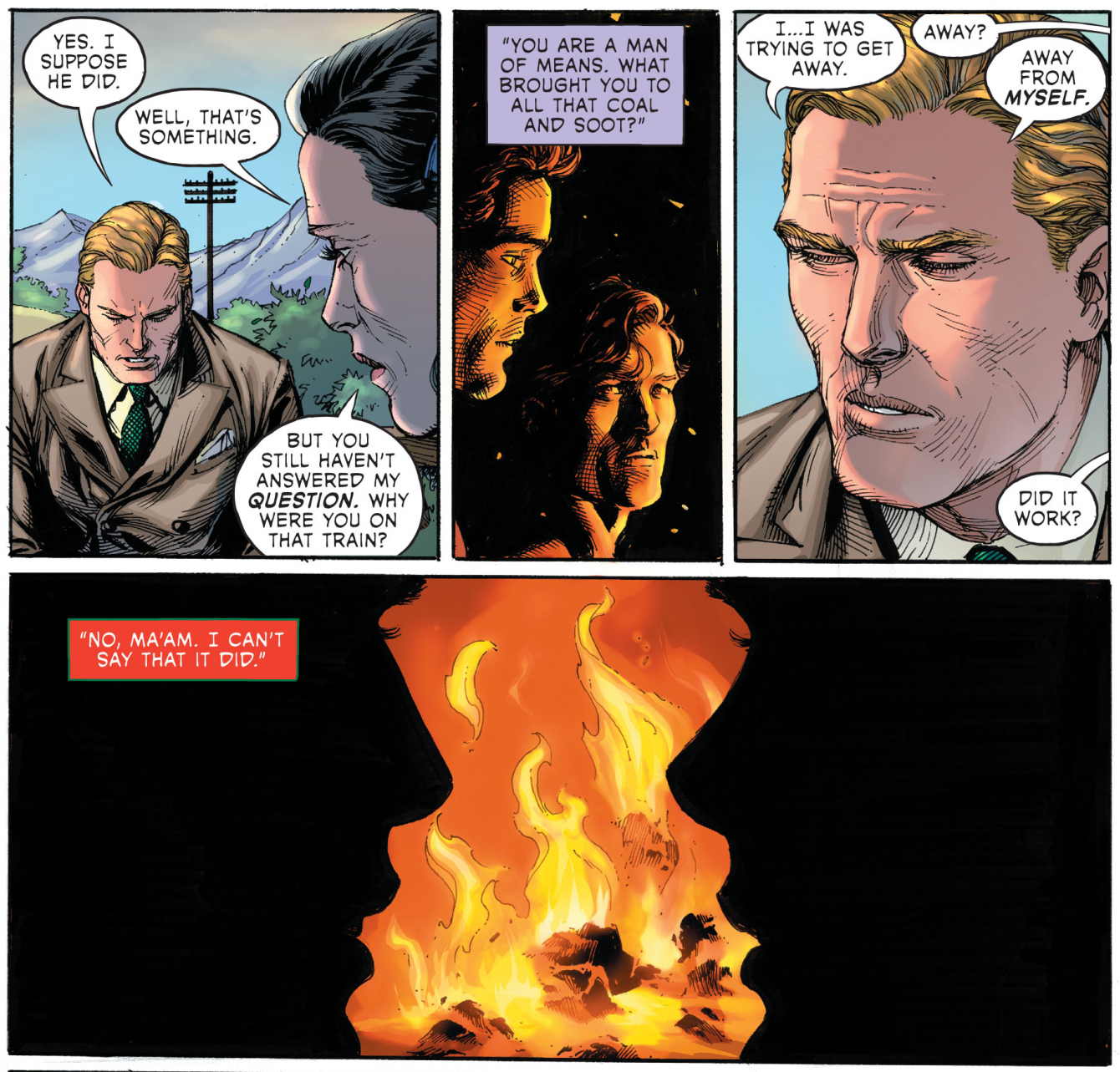 Scott is not the only DC Comics hero to have recently seen a change to his character, as Static has now had his origin updated to feature a Black Lives Matter protest.

What do you make of this change to Green Lantern’s sexual identity? Let us know your thoughts on social media or in the comments down below!