Todd Vaziri, a nearly 20 year veteran at Lucasfilm’s Industrial Light & Magic, has some completely insane thoughts about white people, conservatives, and Republicans in the United States of America.

According to Vaziri’s LinkedIn profile, he’s worked for Industrial Light & Magic for 19 and a half years, beginning in October 2001 as a digital artist. He has since gone on to become a sequence supervisor and more recently a compositing supervisor. 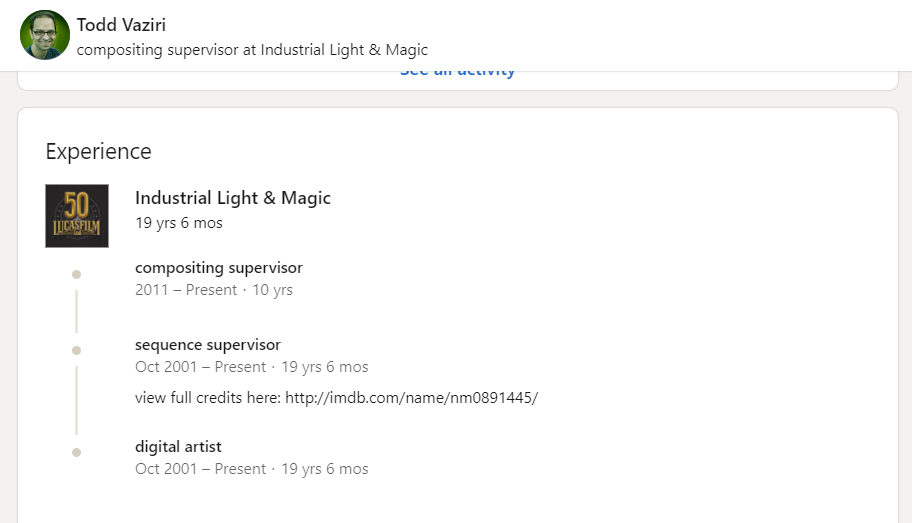 He’s worked on dozens of projects as noted by IMDB. Most recently he’s been the lead artist at Industrial Light & Magic for Marvel Studios’ upcoming Black Widow film. 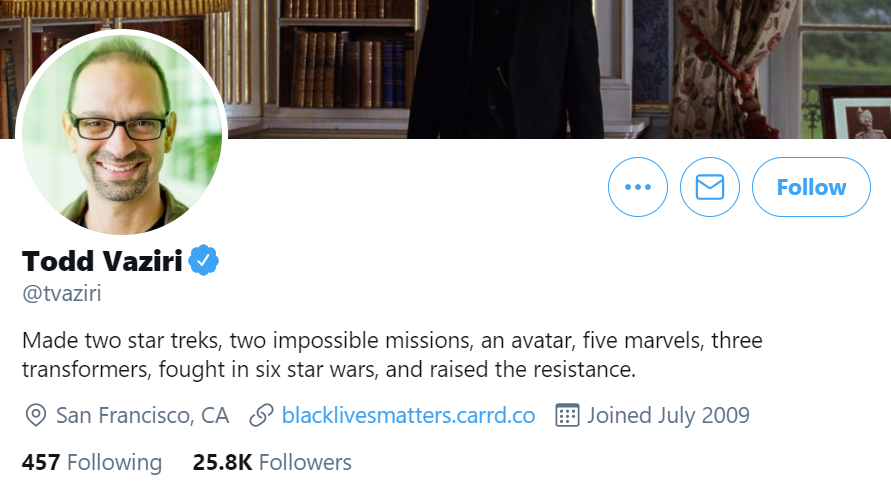 In November 2018, Vaziri posted a bunch of gifs before writing a tweet, “a thing to be happy about: racist dummy Kris Kobach lost.” Kobach was the the Kansas Secretary of State who lost to Democrat Laura Kelly in the Kansas governor’s race in 2018. 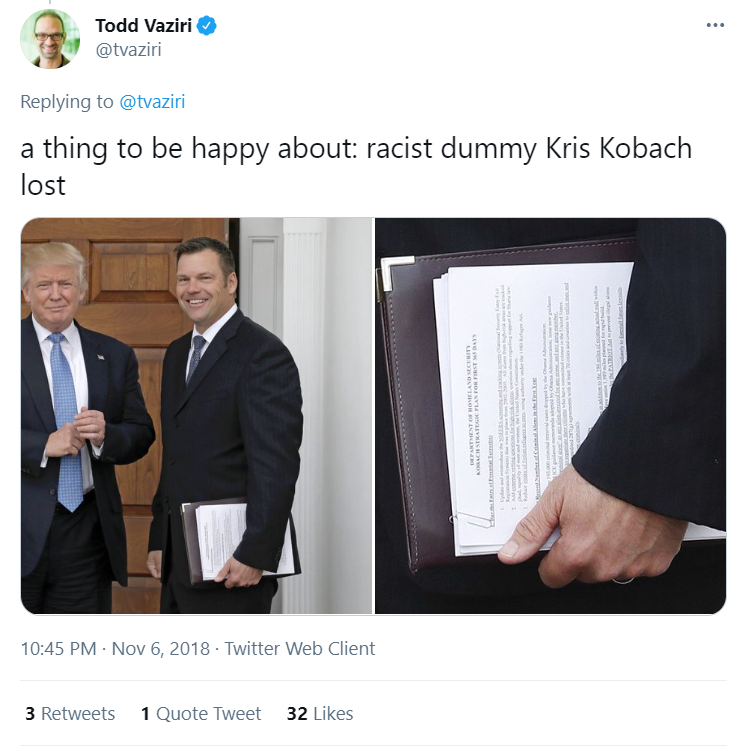 At the end of the thread, Vaziri wrote, “I agree it is sad how racist white people are.”

This isn’t the first time and wouldn’t be the last time, Vaziri went after white people.

In June 2018, he shared an article from The Root titled, “White People Are Cowards.”

In August 2017, he went after Steve Mnuchin claiming “he legitimizes white supremacy.”

He wrote, “Goofy ass day when a producer of “Suicide Squad” stands next to the guy who lost money owning casinos while he legitimizes white supremacy.” 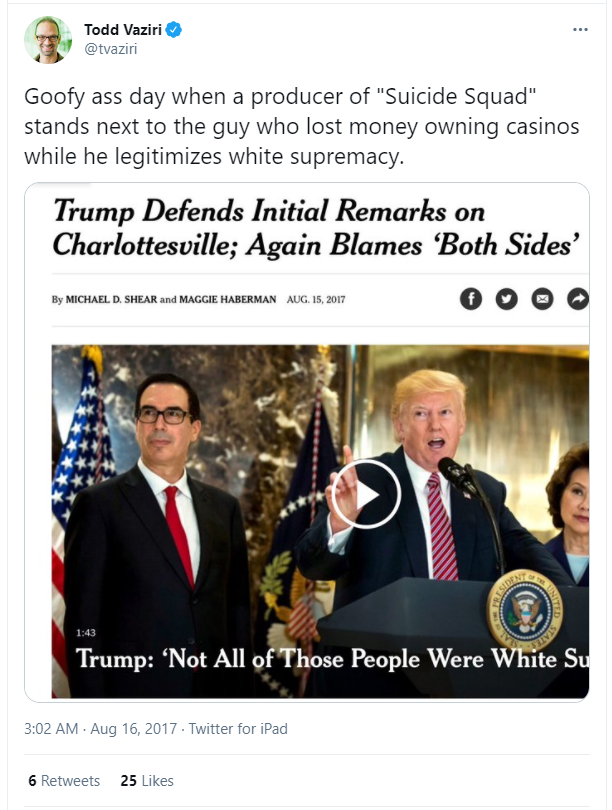 In October 2018, Vaziri made it clear his disdain and hatred wasn’t just directed at white people. He went after Republicans as well.

He tweeted, “There’s a whole slew of white Republicans who don’t like Trump because he’s a crude buffoon. Oh, they still support everything he does but they can’t embrace the man because he threw away the dog whistle and exposes the Republican party for what it has been for a long, long time.” 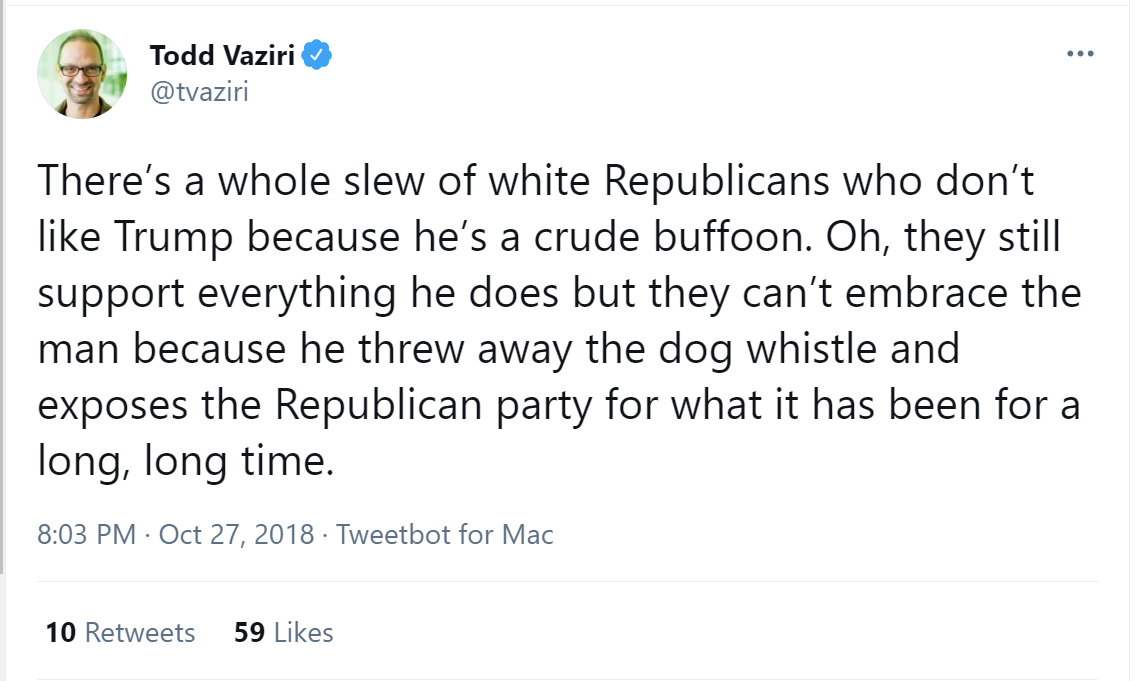 In a subsequent tweet he added, “I know, because I’m related to some of them.”

Back in July 2019, he made clear his hate extended to conservatives as well.

Vaziri wrote, “I do it help wake up people like 20-years-ago left leaning me who at the didn’t fully believe that conservatives were really just racist sexists who want to build a white-supremacy state.” 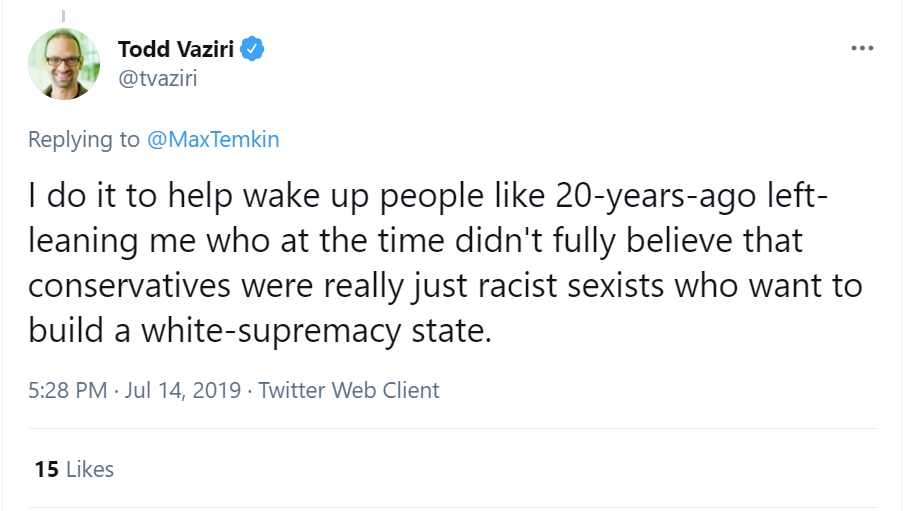 In November 2019, he wrote, “We have white supremacists in the White House. When will the ‘good’ Republicans do something?” 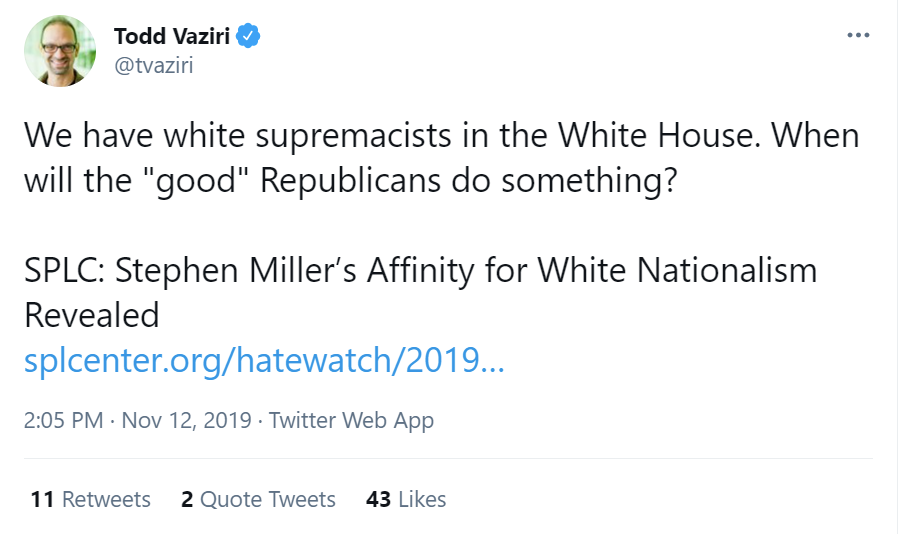 In May 2020, he would insinuate that Republicans and President Donald Trump are synonymous with “white supremacy.”

He wrote, “OK, you’ve asked for it. Here’s what I think about The Snyder Cut…”

“We need to talk seriously about much more significant actions because ‘just voting’ (and winning) probably won’t be enough to stop Trump, the Republicans and white supremacy #generalstrike #massdemonstrations 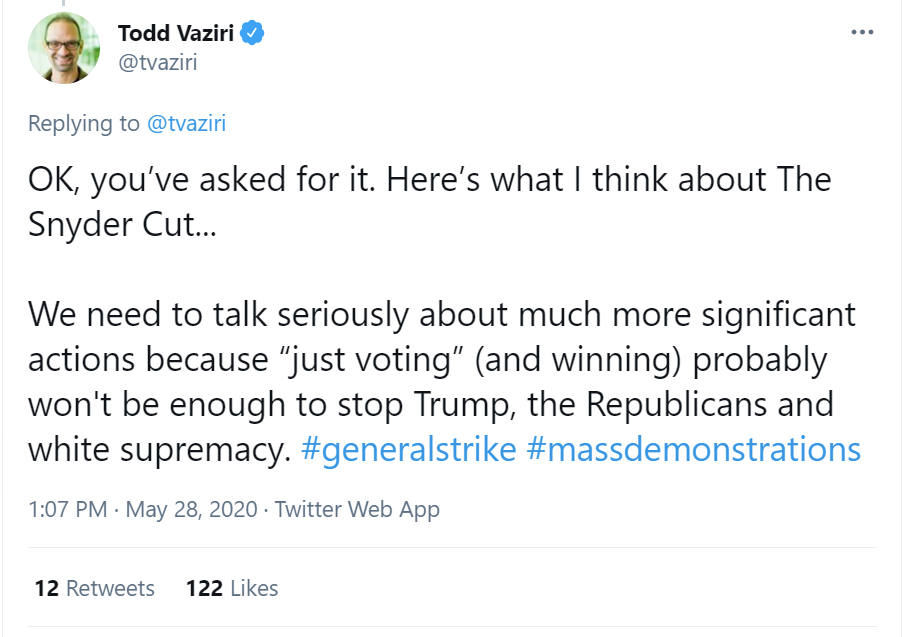 In a subsequent tweet he added, “we need to prepare. but I don’t know what to do.”

Not only does Todd Vaziri appear to be a racist and hateful person based on his tweets, but he also appears to be an avid proponent of cancel culture.

The Star Wars and Lucasfilm veteran has also called on deplatforming of people he describes as “white supremacists” from YouTube. As we know from his previous tweets that includes Republicans and conservatives.

Vaziri wrote in May 2020, “Don’t forget to knock white supremacists and hate speech off your own platform, because that would help.” 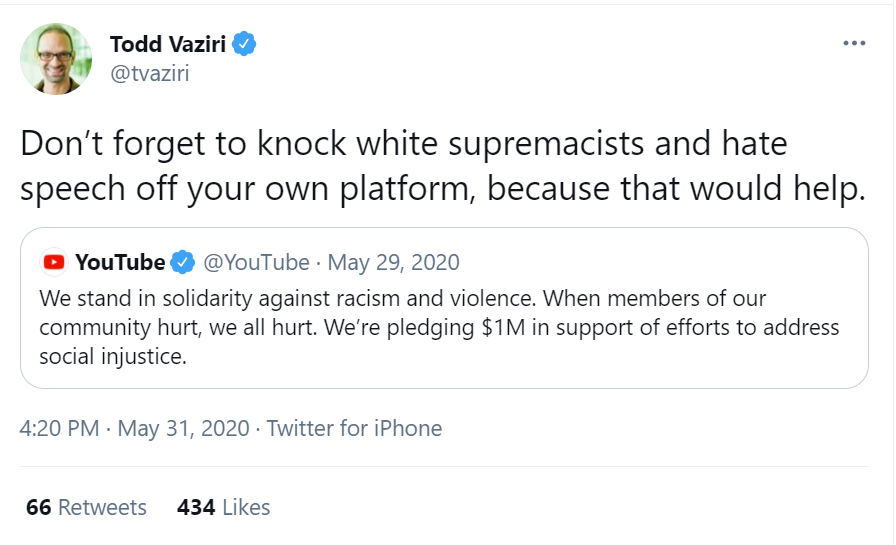 In August 2020, he also implied that Covington Catholic student Nick Sandmann is a Nazi.

He wrote on Twitter, “Thought of this sketch ever since seeing that anti-abortion rally attending MAGA-hatted guy speak at the Republican National Convention. Playing the Nazi Card.” 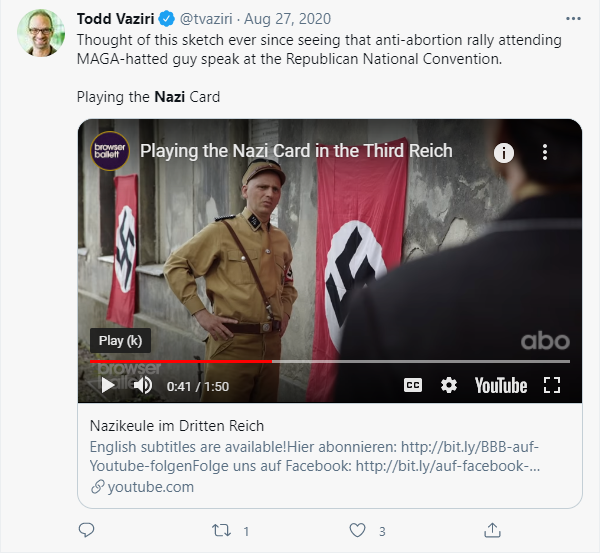 You can see the full clip below.

Given Vaziri is still employed at Lucasfilm, it’s pretty clear Disney supports outright racists and hateful people. Meanwhile they fire people like Gina Carano, who warn against the hatred being spewed by people like Vaziri against his fellow Americans.