The new program comes after Netflix recently announced to their shareholders in January 2021 that their annual revenue increased 24% year over year to exceed $25 billion.

The letter reads in part, “With 8.5m paid net additions in Q4, we crossed the 200m paid memberships mark. For the full year, we added a record 37m paid memberships, achieved $25 billion in annual revenue (+24% year over year) and grew operating profit 76% to $4.6 billion.”

You can see their revenue numbers in the chart below.

As for their new policy, it was revealed by Twitter user @DOP3Sweet, who shared a screen shot that prompted users to start their own Netflix account.

It specifically reads, “Start your own Netflix for free today. If you don’t live with the owner of this account, you need your own account to keep watching. Join Free for 30 Days.”

It then asks, “Is this your account? We’ll send you a verification code.”

There are then three options to receive the code: Email Code, Text Code, and Verify Later. 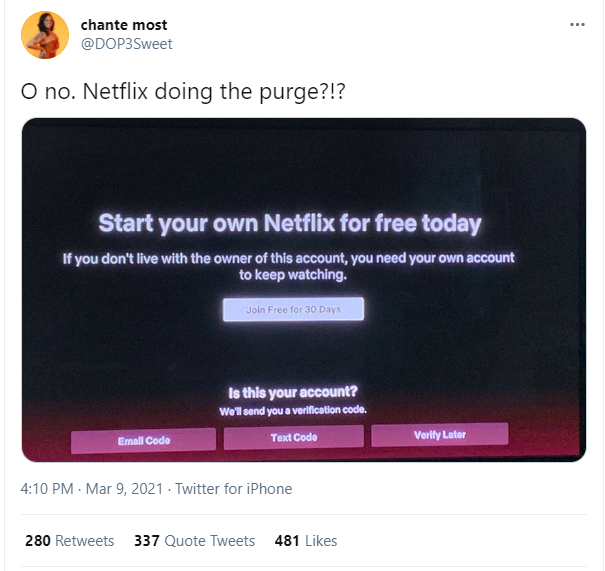 A Netflix spokesman told The Streamable that they were running a test. The spokesman stated, “This test is designed to help ensure that people using Netflix accounts are authorized to do so.”

The policy comes after Netflix stated in their Q4 letter that “average revenue per membership was flat year over year both on a reported and foreign exchange (F/X) neutral basis.”

During the company’s quarterly earnings call in October 2019, Netflix product chief Greg Peters detailed the company’s stance to password sharing might change in the future.

Peters stated, “We continue to monitor [password sharing].” He added, “We’ll continue to look at the situation and we’ll see those consumer-friendly ways to push on the edge of that, but we’ve got no big plans at this point in time in terms of doing something different there.”

Netflix does currently limit the number of devices you can stream to based on the subscription you sign up for. Their basic plan, which costs $8.99 a month limits you to one screen at a time.

What do you make of Netflix’s new crackdown on password sharing?