It begins, “In 2061 AD, Japan is dominated. Divided and ruled by the four major economic blocs of the world, the Japanese people spent their days oppressed as subjugated citizens. Japan became the front line of the world where AMAIM, a human-type special mobile weapon deployed by each economic zone, strode about..”

The description adds, “One day, Amou Shiiba, a boy who loves machines, meets i-LeS (autonomous thinking AI) named “Gai,” and this leads him to throw himself into the battle to reclaim Japan, by piloting the AMAIM “Kenbu” built by himself.”

Take a look at the first trailer.

The show’s character design is being headed by Kenichi Onuki with Yuya Koyanagi of Ken Okuyama Design heading up the mechanic design with Kanetake Ebigawa, Kenji Teraoka, and Ippei Gyoubu.

The mechanic design supervisor is Kiyoyuki Okuyama of Ken Okuyama Design. Finally, the music is by Rasmus Faber. Production is being completed by Sunrise Beyond.

Crunchyroll’s Komatsu also reveals that Ken Okuyama Design, led by Kiyoyuki Okuyama is the main mechanical designer for the AMAIM plastic model titled HG 1/72 Knebu that will be released by Bandai Spirits in the fall of 2021. 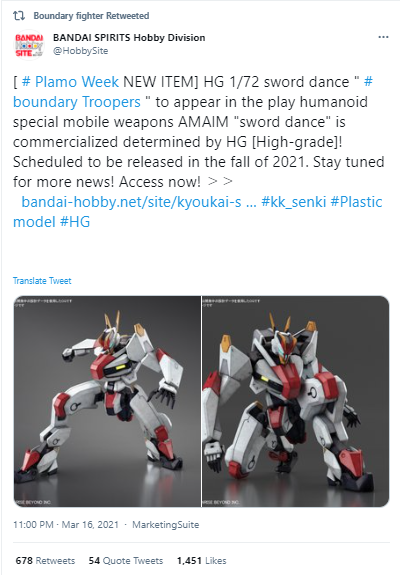 Bandai Spirits released a trailer for the model as well. Take a look.

Do you plan on checking out Kyoukai Senki when it arrives on the fall of 2021?