Genshin Impact players have taken to the game’s official forums to express their anger regarding the apparent breast reduction for the upcoming character Rosaria in Version 1.4.

As Sankaku Complex reports players on the official forum have shared before and after images of Rosaria from when she was first introduced to the game as an NPC player in Version 1.2.

User veck shared one side by side comparison and wrote, “I don’t have any big hurtful words to give (even though I’m pretty hurt myself), I just want to know the reason for the change. Mihoyo has made so much money so far; is getting the characters how they are introduced too much to ask in return?” 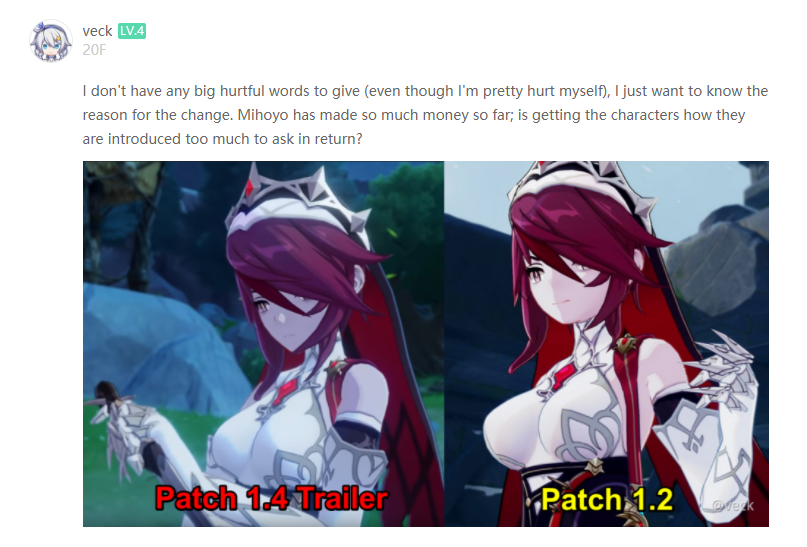 Player The445 shared another comparison image and wrote, “Here’s a better comparison and you be the judge if you wanna keep investing on a company so called “tech otakus save the world”. Copy and paste the link in case the image is broken. Comparison from the trailer https://imgur.com/a/IqcvEhk.” 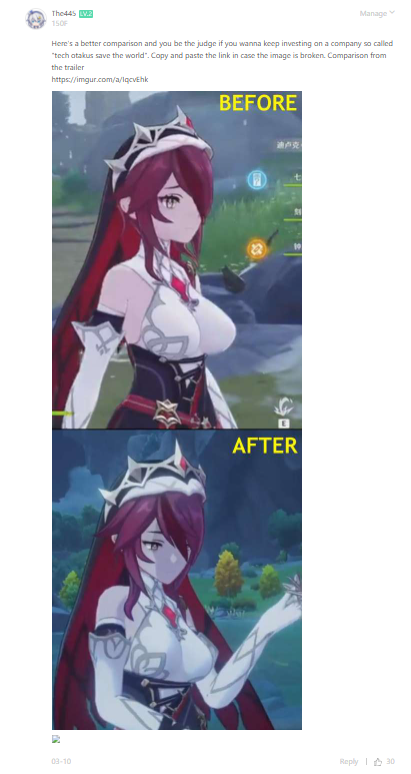 OmegaNova also shared an image and wrote, “Big big difference I think, not an expert on this stuff but I’d say it is at least 2 cup sizes. Maybe it is true that you didn’t notice the difference until now, but surely you can tell from the image, but also if you say “but I wouldn’t notice the difference actually playing the game unless I stopped to take a look myself intending to see a difference” then that is contradictory to “I don’t want to see clipping issues”.”

“If you didn’t notice the difference in breast size then there is no way in hell you would have noticed any clipping breasts. That’s paying 20x more attention to detail while stopping to look for something specific on purpose. Both statements can’t exist as an excuse,” OmegaNova added. 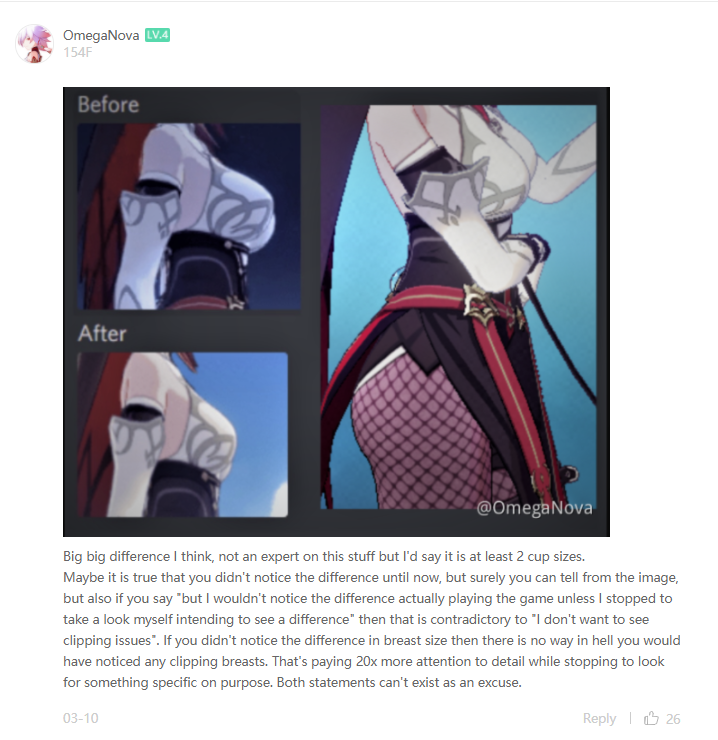 Others simply expressed their anger and disappointment at the change.

Jappasa wrote, “revert the nerf on her milkers or I ain’t rolling m*hoyo”

JTH wrote, “The change in her model from 1.2 was completely unnecessary. A lot of people counter the complaints by saying ‘it doesn’t matter’. But if it doesn’t matter, why bother changing it at all?”

People wouldn’t be complaining if she was always this size. It’s the pointless change that has people upset. I’ll be honest. Yes, I find large breasts appealing. I’m not ashamed to admit, and I know I’m not the only person who feels this way,” the player continued.

JTH then added, “The character models already lack diversity as things are. There was absolutely no need to change something about Rosaria’s that both made her stand out a bit more, and made her design more appealing to some people.”

Renka wrote, “Not a fan of the changes made on Rosaria. The change on her model only tells me someone on the developer team has something against busty woman, which translate to body shaming. I already gave my thoughts on a more detailed thread.”

Forseen stated, “Rever her model please Mihoyo. Her model was already in game and no one complained. Why do this stupid bait and switch?”

And Movr wrote, “Please revert to the in-game model she was using in 1.2 quest in Dragonspire.”

miHoYo, Genshin Impact’s developer, has not officially responded to the complaints, but an alleged response shared to Reddit by user Prodigy0928 reads, “We believe the current design is more Appropriate~! We shall be forwarding your concern to the related department so this can be checked at the soonest possible time.” 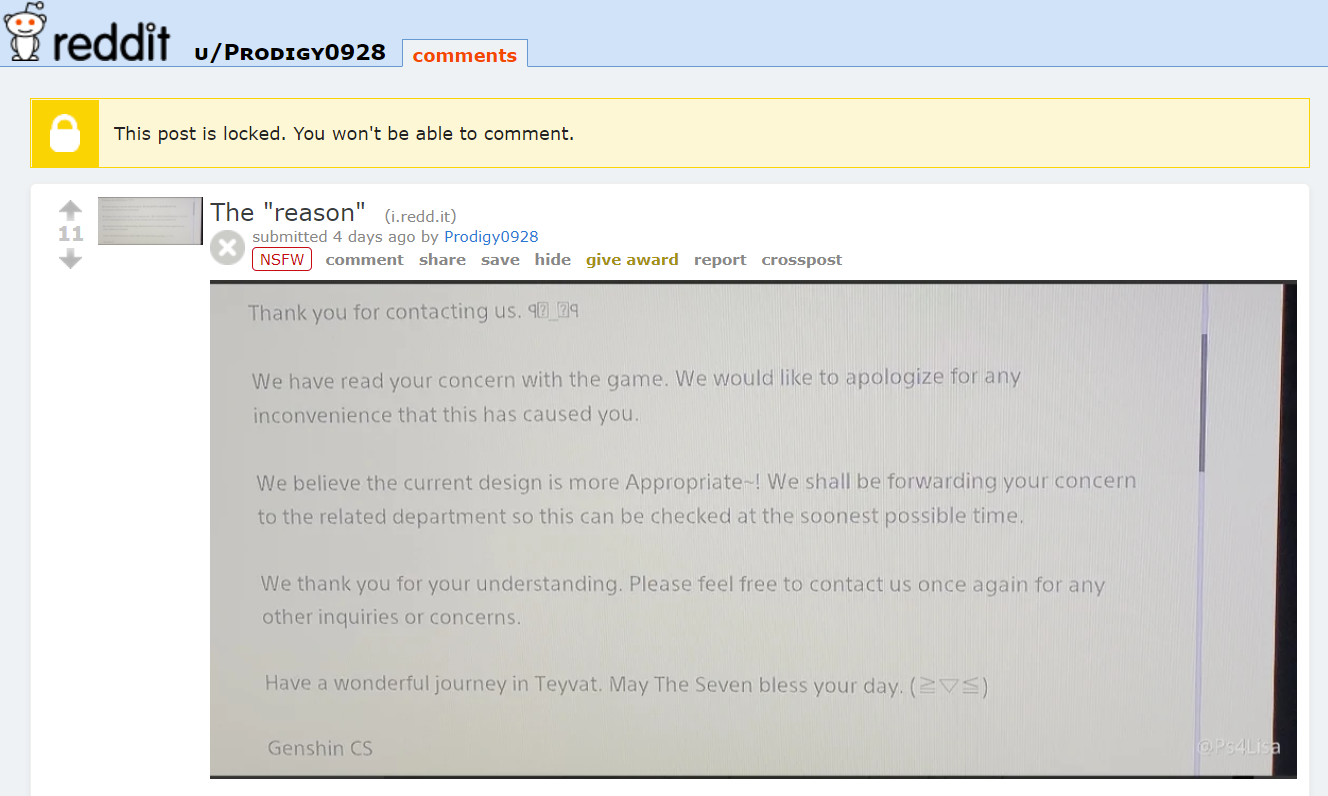 What do you make of these alleged changes to Rosaria in Genshin Impact?