When Dark Souls first dropped onto the scene in 2011, I was immediately taken by the breath of fresh air that was the series’ gameplay. The insane difficulty, the strategic thinking, and the assured fact that you -will- die, offered a challenge that manyveteran video game players, hadn’t faced in a long time.

However, despite how much I loved the gameplay, I admit that I could never fully get into the Souls series because I’m just not a fan of medieval aesthetics and settings (outside of the occasional exception like Lord of the Rings or The Legend of Zelda).

Then, along came Nioh.

With the first Nioh game, Koei Tecmo combined the “get good gameplay” of Dark Souls, the aesthetics and folklore of 1600s Japan, an unused Akira Kurosawa script, and the historical tale of William Adams, to produce a worthy competitor to From Software’s signature series.

Three years later, Nioh 2, would release worldwide for the PlayStation 4. One year even later, the highly-lauded sequel to Koei Tecmo’s Eastern-themed alternative to Dark Souls has now arrived on both Windows and the PlayStation 5 in the form of Nioh 2: Complete Edition, an upgraded release that includes the base game and all of its previously released DLC.

But the question, as always, remains: Was it worth the wait? 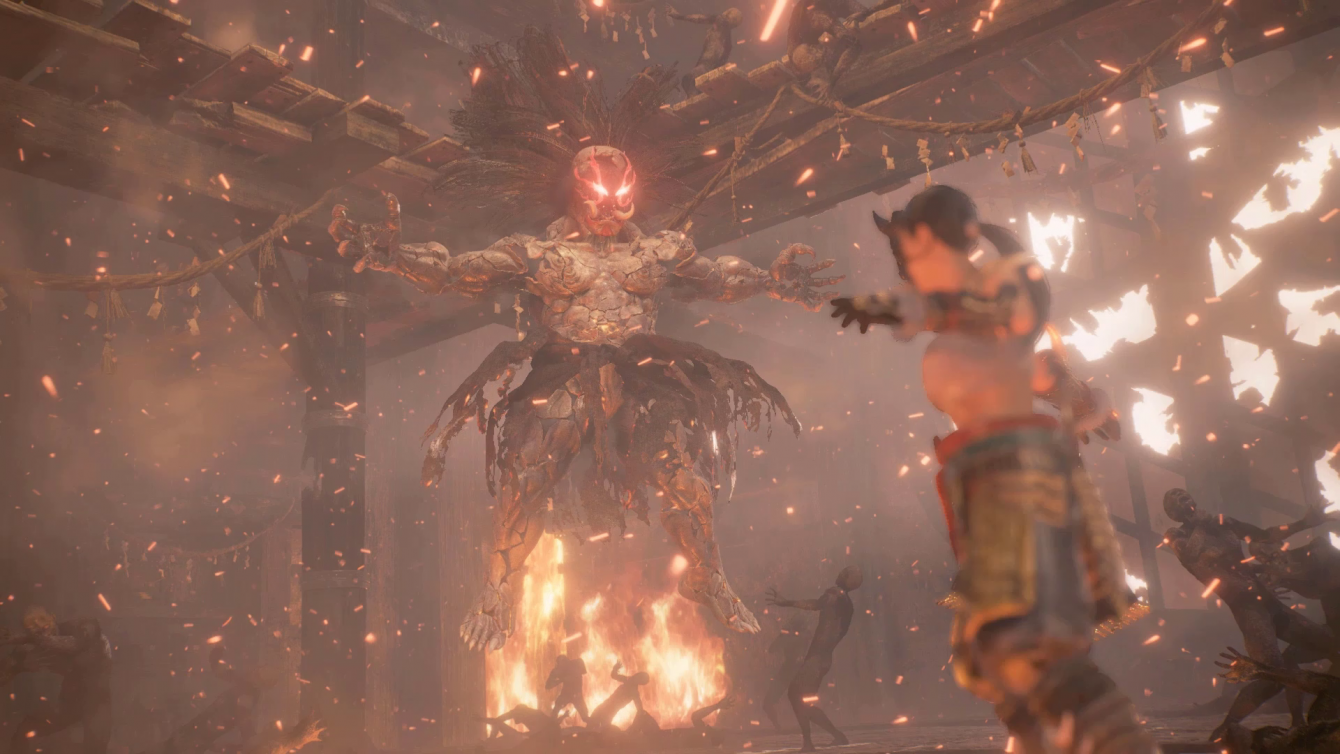 For fans of the first game, the core gameplay of Nioh 2 should be quite familiar, as it remains relatively unchanged from the original Nioh. Taking on the role of the half-yokai Hide, players will fight their way through the various soldiers and yokai strewn about 1500s Japan, utilizing weapons ranging from fists, to split staffs, to straight up personal use hand cannons, and upgrading RPG-like stats along the way.

When facing enemies in combat, your weapon’s respective attacks are broken up between low, medium, and high stances, each of which offers different techniques that will drain your limited ‘ki’ meter, a sort of ‘stamina meter’ that regulates how often and how many times you can use your attacks before recharging. 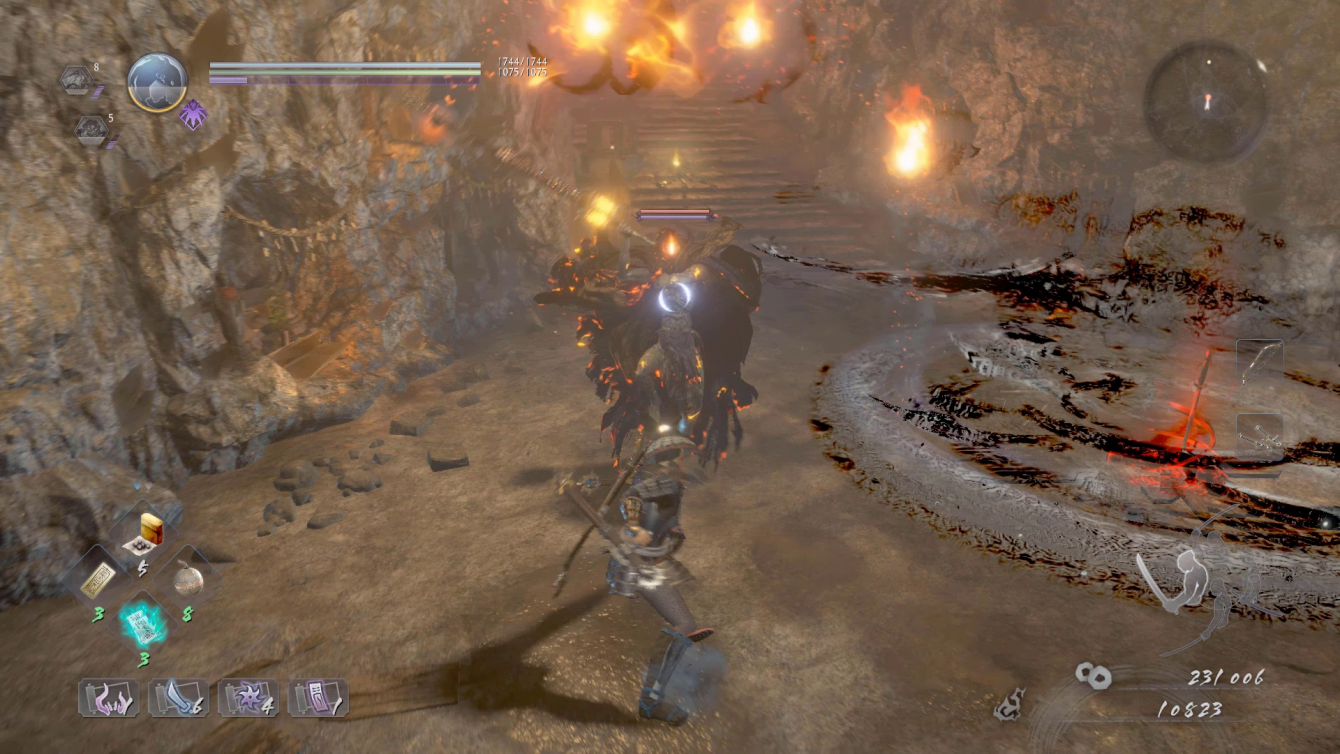 In order to survive, players will have to not only use their various moves to the best of their abilities, but they’ll also have to manage their ki to ensure they don’t run out of stamina at a crucial moment in a fight.

To that end, the game also features the return of the Ki Pulse, an ability which boosts the recovery rate of a player’s meter if performed at the right time. But, if performed wrong, your ki meter will recover to a significantly weaker degree. It’s a tricky, high-risk-high-reward technique that players will have to master if they wish to get through the game without constantly dying every thirty seconds.

However, these gameplay elements should ring familiar to anyone who played the first Nioh, as Nioh 2’s combat system is, essentially, the exact same, barring a few minor tweaks and quality of life improvements. 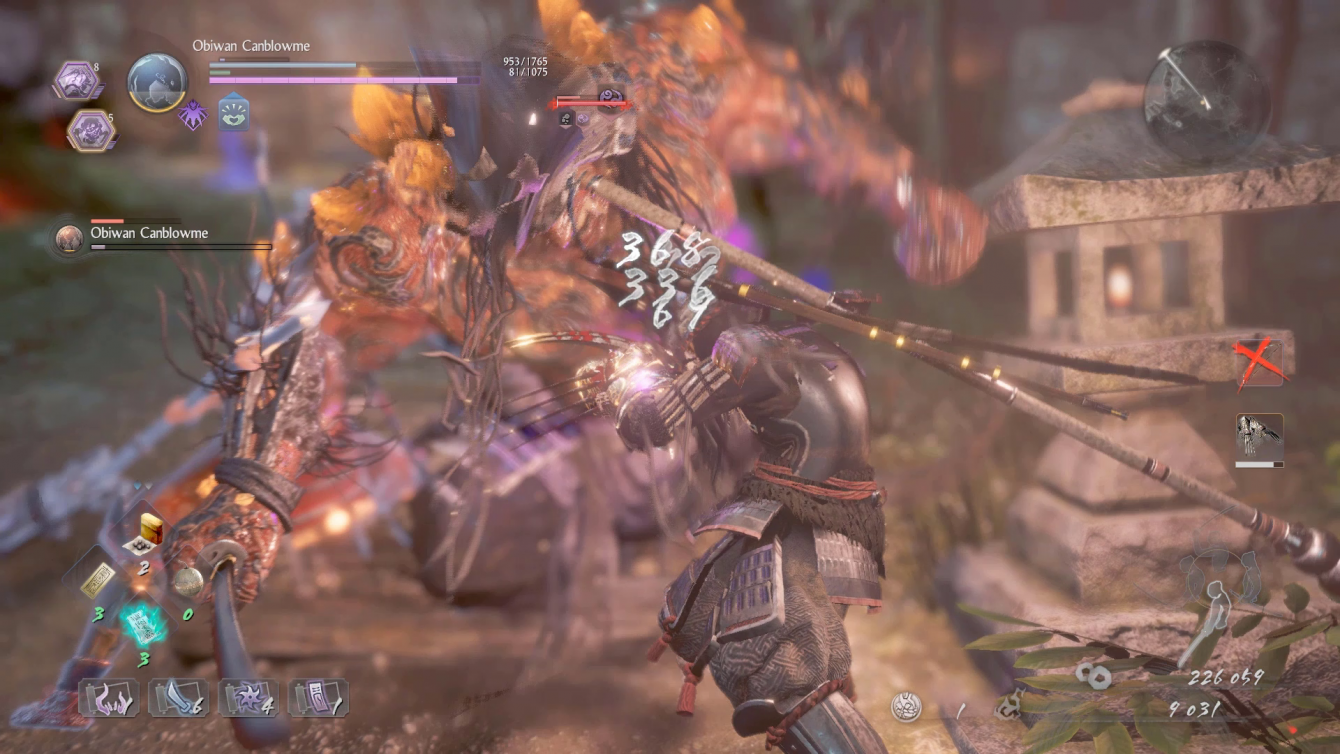 In fact, there are really only two significant changes between the gameplay of Nioh 2 and its predecessor.

One is the addition of Soul Cores, orbs of yokai energy which allow the player to utilize the skills of the enemy who dropped them, in a system very reminiscent of the Tactical Soul system of Castlevania: Aria of Sorrow. But like your basic attacks, the player’s use of Soul Cores is limited by a separate energy bar that only refills through the killing of enemies and the exploration of the levels around you.

It’s a system that makes sense, given how strong and devastating some of the abilities granted by Soul Cores can be, though the high cost of some such techniques will likely see you saving them somewhat exclusively for boss fights and sticky situations rather than experimenting and playing around with them. 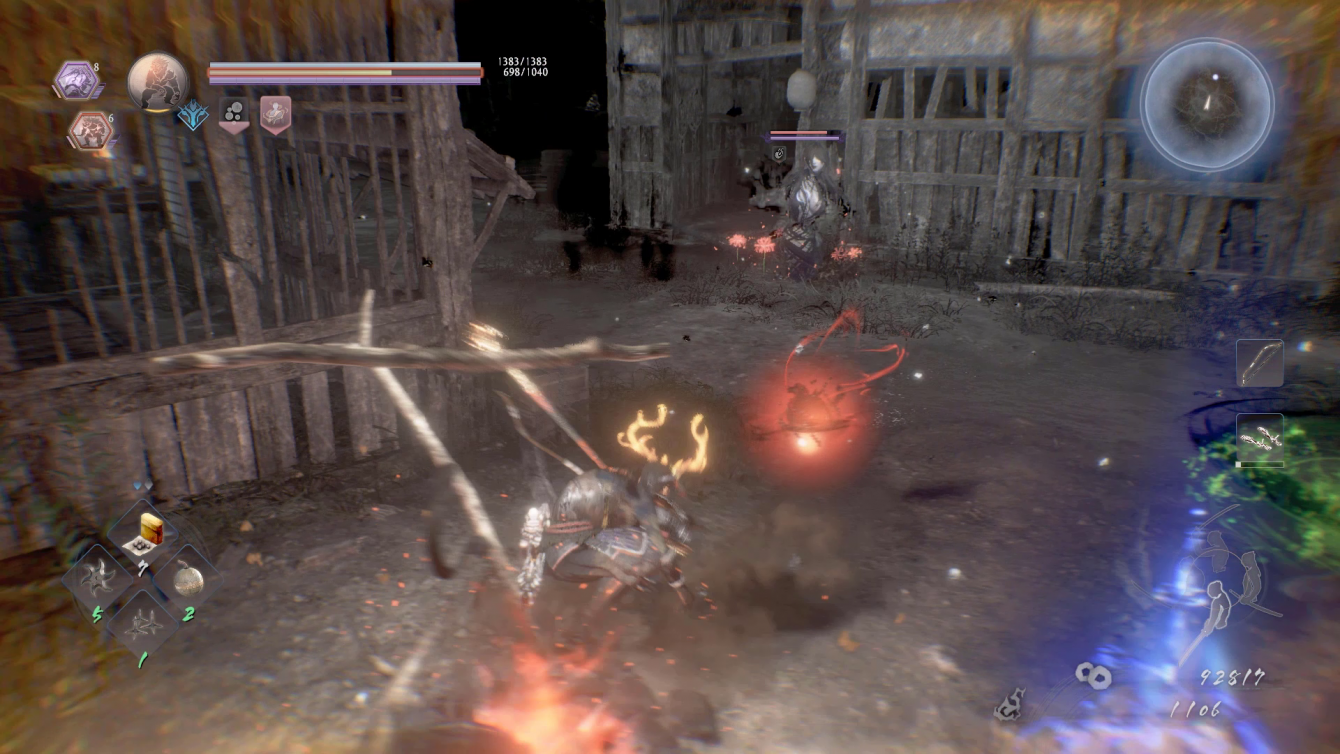 The other is the Yokai Shift, which allows players to both be possessed by their Guardian Spirit for a limited time and perform a stronger set of attacks or perform an attack-interrupting ‘Burst Counter.’ The Yokai Shift mechanic replaces the Living Weapon from the original game, and in my opinion, for the better.

In Nioh, as the game progressed, the Living Weapon technique could eventually find itself completely overpowered, allowing players to tear through enemies and levels without even breaking a sweat. With the Yokai Shift, though the technique is still powerful, players will never reach the point where they’re essentially a walking god. 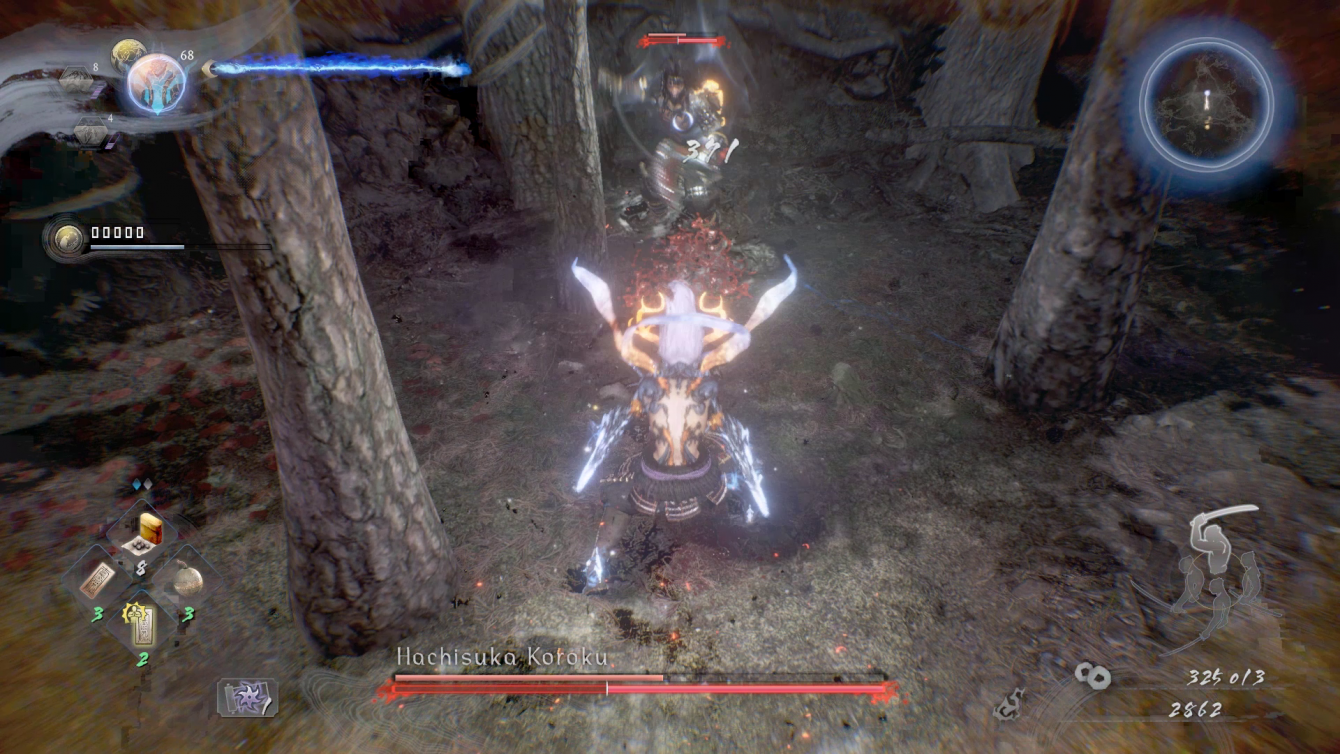 With the Burst Counter, a perfectly timed use of the move can stun enemies mid-attack and knock them off guard, leaving them open to devastating retaliation. Though the move seems somewhat inconsequential in the first few hours of the game, as one can certainly stumble their way through many of the initial levels without needing to use it, the Burst Counter is an integral part of Nioh 2’s combat system.

Trust me when I say you’ll want to master it as soon as possible in order to stand a chance in the game’s later levels. 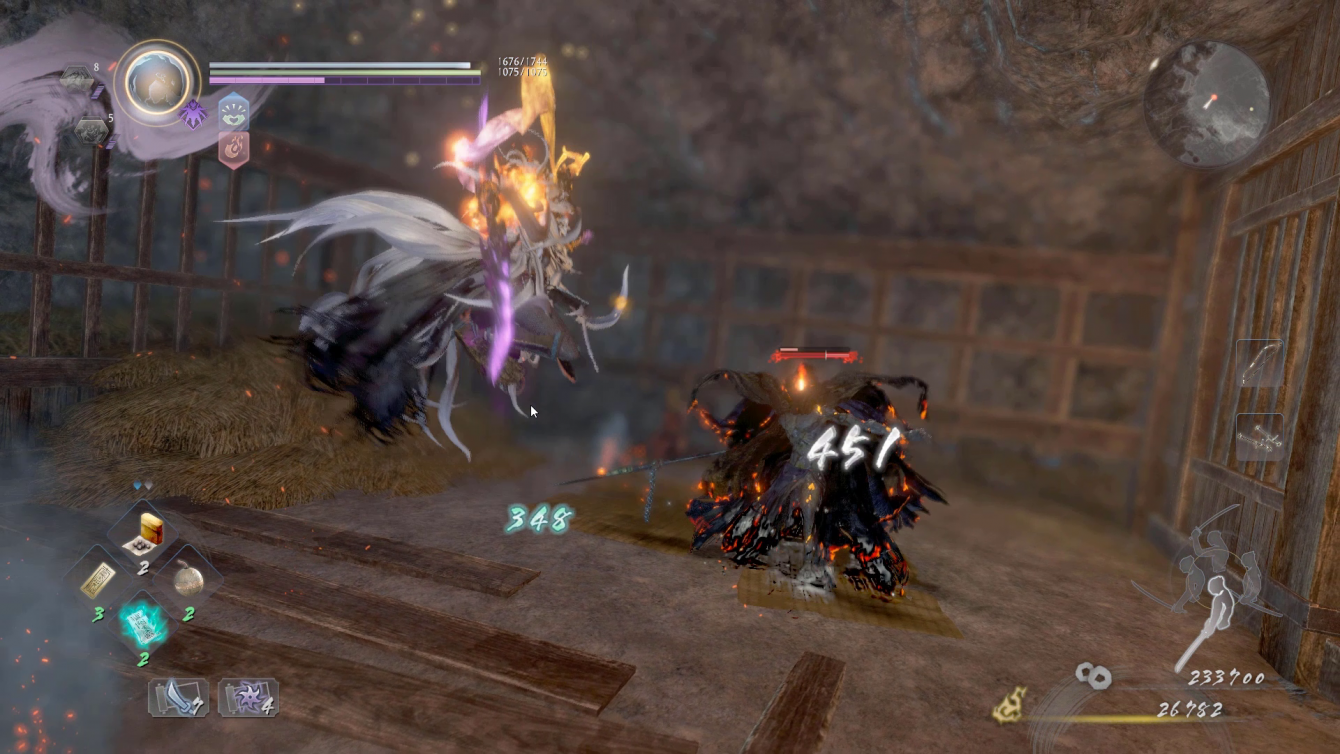 Of course, the main appeal of Souls-like gameplay is its challenge, which Nioh 2 has in spades. Depending on your skill level, it’s possible you’ll find yourself running certain areas over a dozen times due to either a challenging enemy, an unexpected environmental trap, or oftentimes, both.

If you’re looking for an action-style hack-and-slash along the lines of Devil May Cry or Metal Gear Rising, you’ll be sorely disappointed in Nioh 2, as the game’s fun comes from this repetition, pushing yourself to find ever better ways to deal with a given challenge.

However, if you’re finding yourself struggling to pass a particular area or defeat a certain boss (like I personally had many times throughout my playthrough), Nioh 2 also offers the ability, like in Dark Souls, for players with an internet connection to summon the ‘spirit’ of another player for assistance.

Players can summon either a blue spirit, which will temporarily assist you in combat, or a red spirit, which can be fought in exchange for equipment, experience, and Ochako Cups, the in-game item needed to summon both enemy and ally spirits. Thankfully, the assistance of spirits is not necessary to complete the game, so players who want to run the game completely solo won’t miss out on anything. 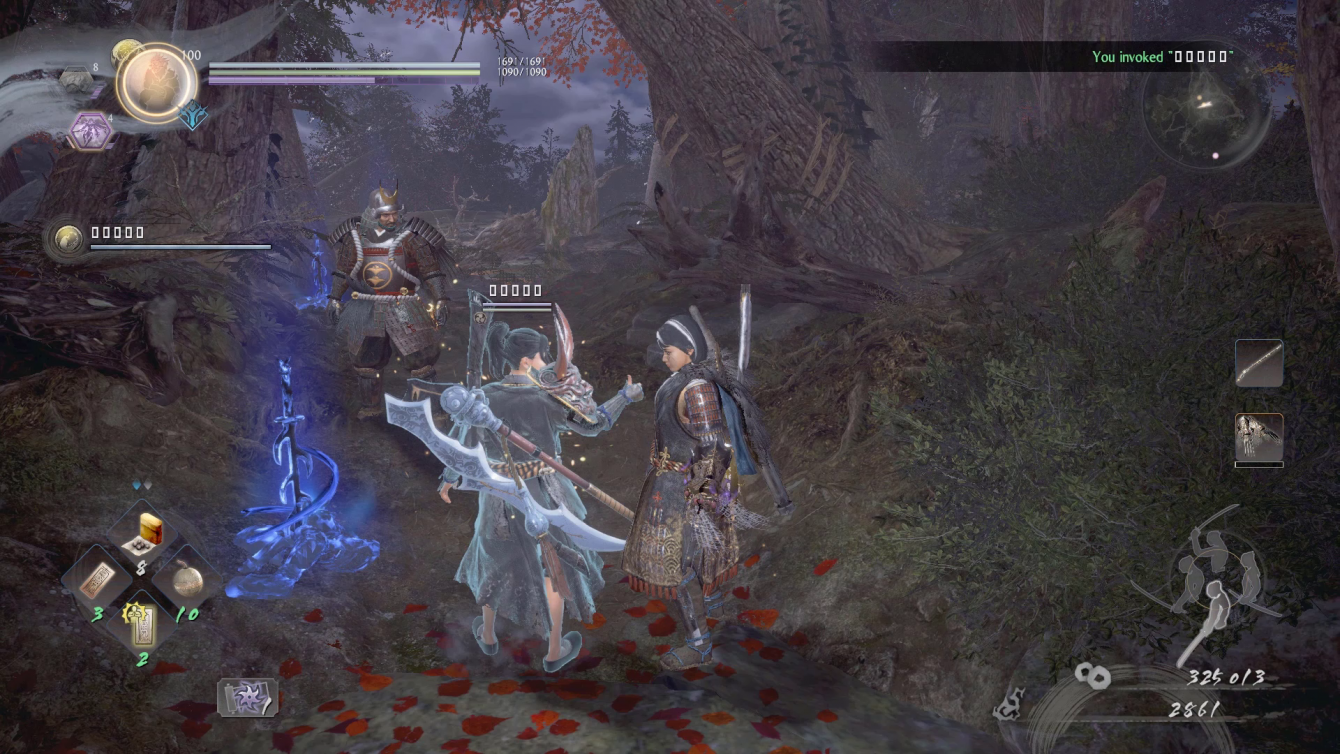 Despite the game’s many gameplay strengths, no game is without its weaknesses, and for Nioh 2, that weakness is its story, especially when viewed in light of its predecessor’s originality.

In the first game, Koei Tecmo told the story of William Adams, the first Englishman to reach Japan and one of the few non-Japanese in history to become a Samurai, as he pursued a magic wielding Edward Kelley across a Yokai populated Japan. The result? One of the most oddball but inspired pieces of historical fiction in recent times. 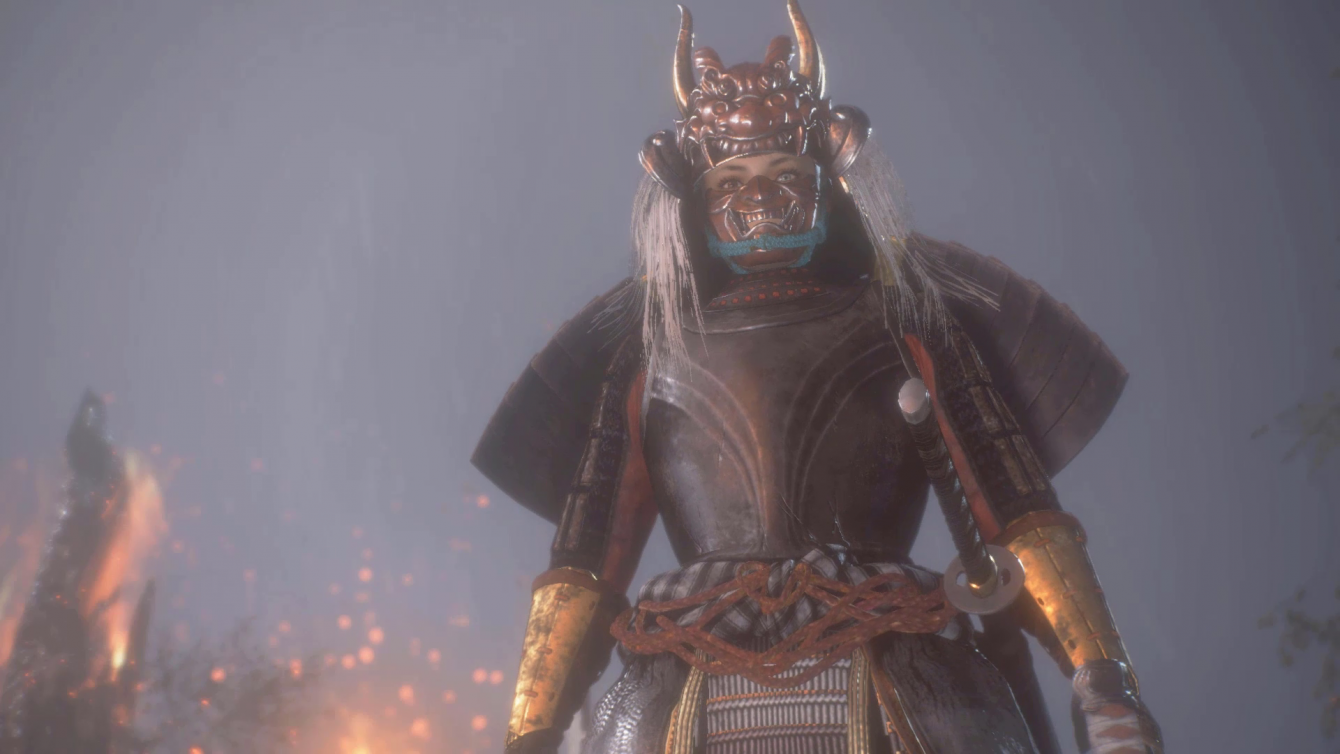 But in Nioh 2, players are put in the role of the voiceless Hide, a half-yokai who finds himself dragged into the feudal wars of the Sengoku Period by his newly-met companions Tōkichirō and Mumyo, an Amrita and Demon hunter, respectively.

While the game still has its fair share of historical figures factoring into the plot, the use of a silent protagonist really makes the game feel like a generic anime than anything else. Odds are that you probably won’t walk away remembering a lot of it. 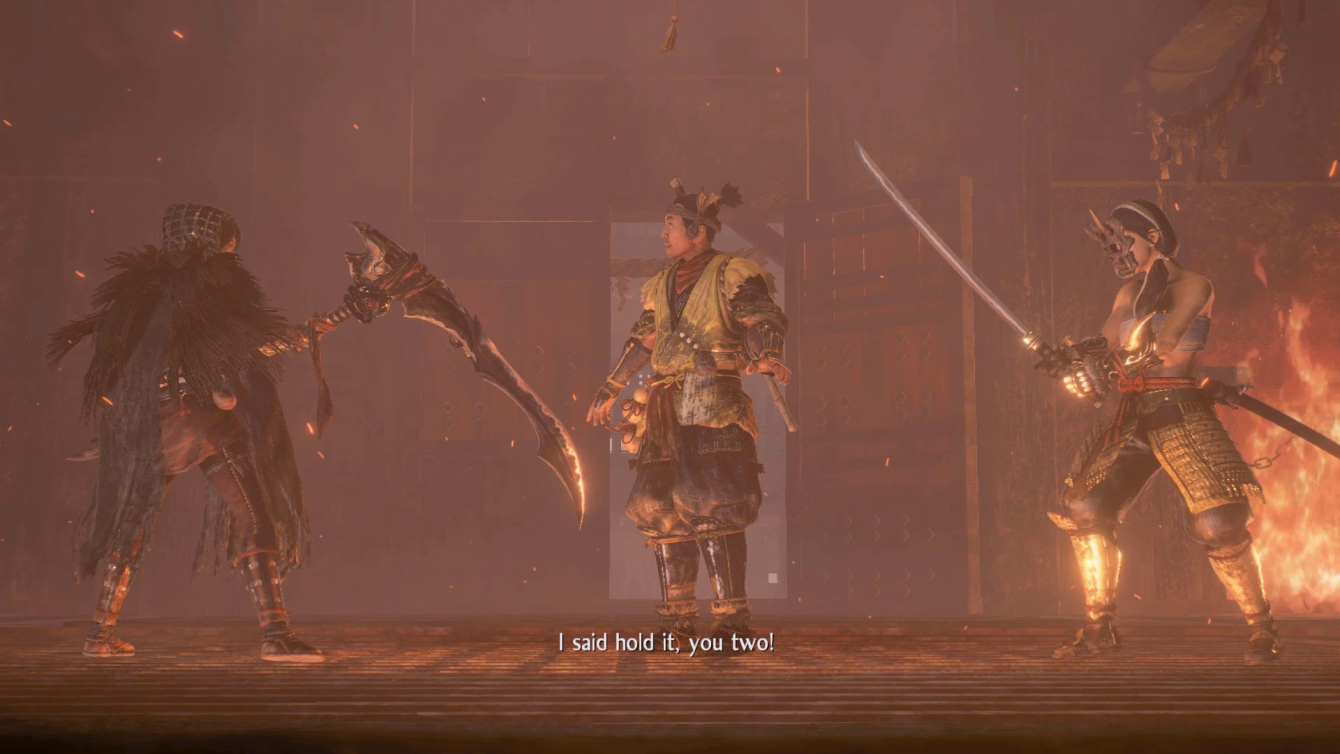 Though, that’s okay, because the draw of Nioh 2, and all Souls-likes, has rarely been the story modes, but always the gameplay. At its core, Nioh 2 harkens back to the heyday of video games and the release of expansion packs, because that’s essentially what it is.

Building upon the strengths of the original but taking time to iron out many of its flaws (such as the level design and the aforementioned Living Weapon system), Koei Tecmo has delivered an improved gameplay experience for players who seek more of the Nioh franchise’s Samurai-flavored take on the Souls-like concept. 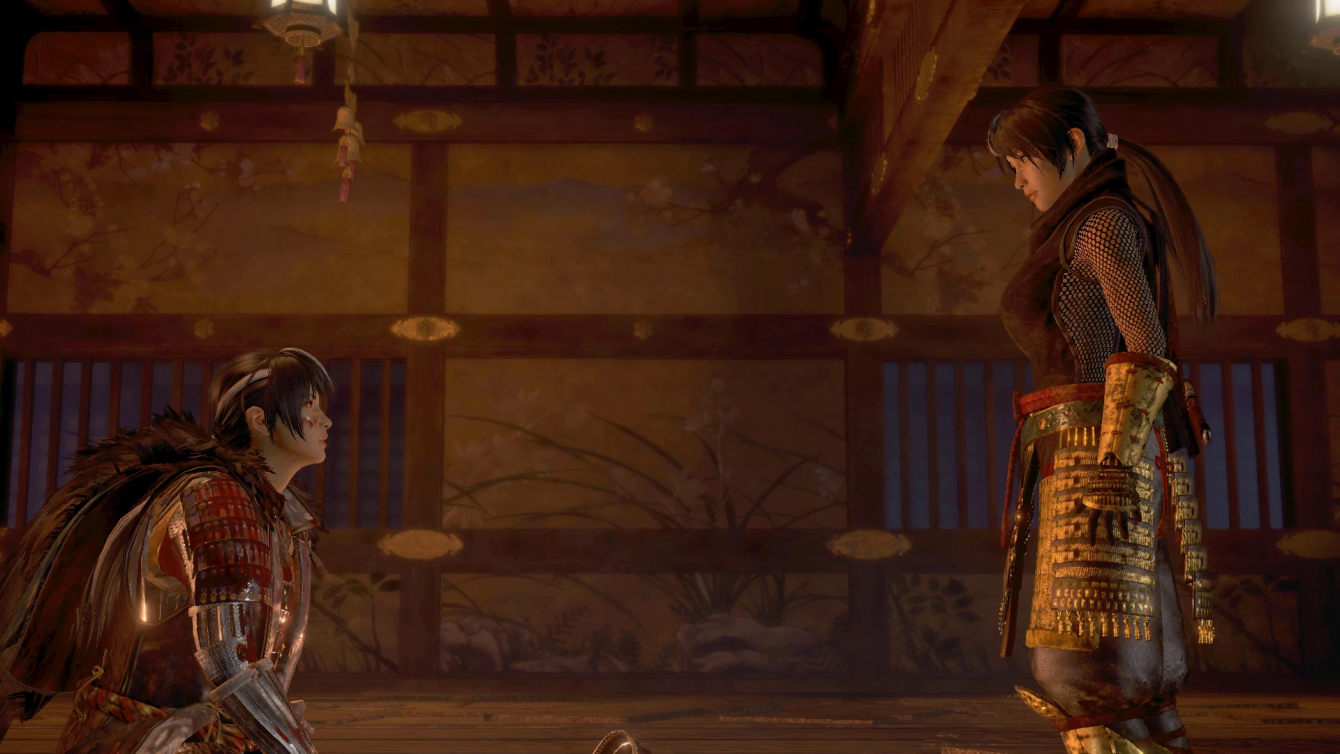 As such, if you’re not a fan of Souls-likes in the first place, Nioh 2 is unlikely to turn you into an instant fan, especially in the face of it’s mildly steep learning curve. But for players who want to challenge even more Yokai to the death in feudal Japan, this sequel definitely has what you’re looking for.

Ultimately, I only have one thing left to say. The Enki enemy, no matter where, when, or how you encounter it, can go to Hell. 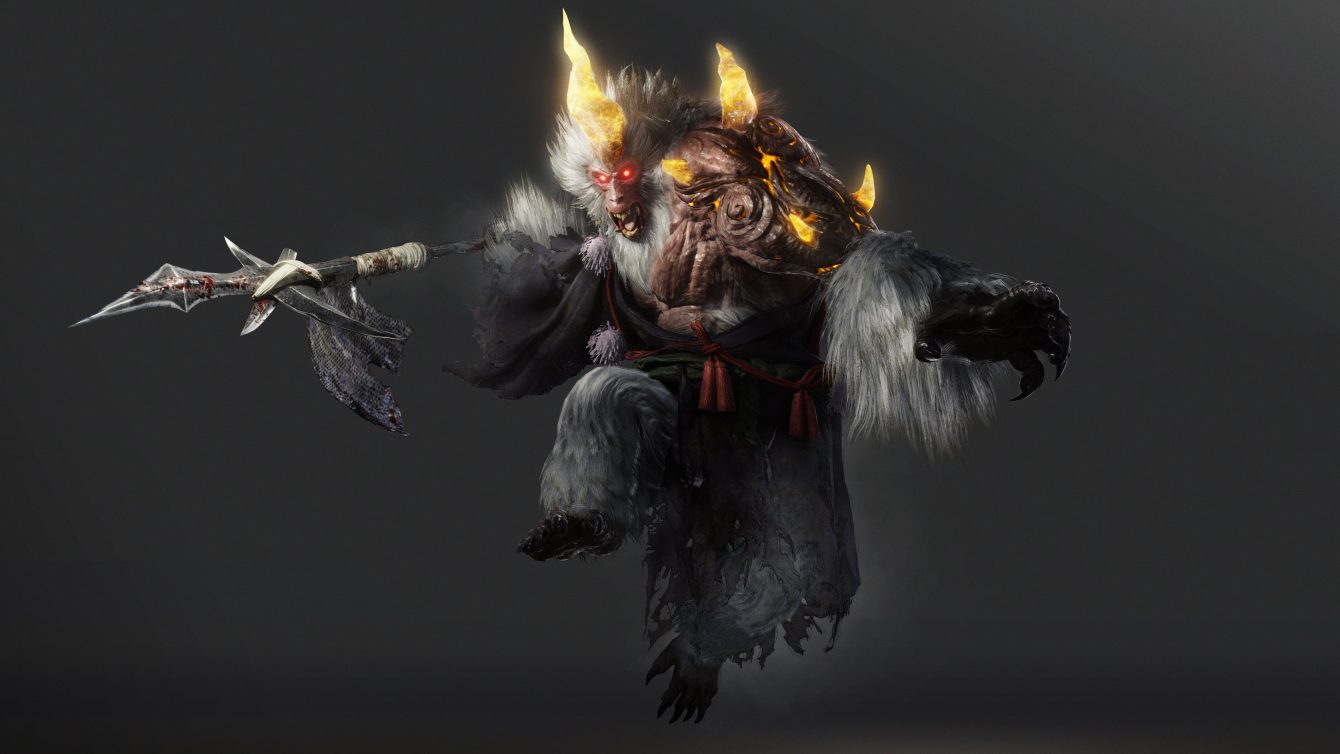 (Oh, one last thing. I also recommend staying away from the English voice track entirely, otherwise you’ll be subjected to the dissonance of Japanese characters speaking with wildly uncharacteristic British accents.) 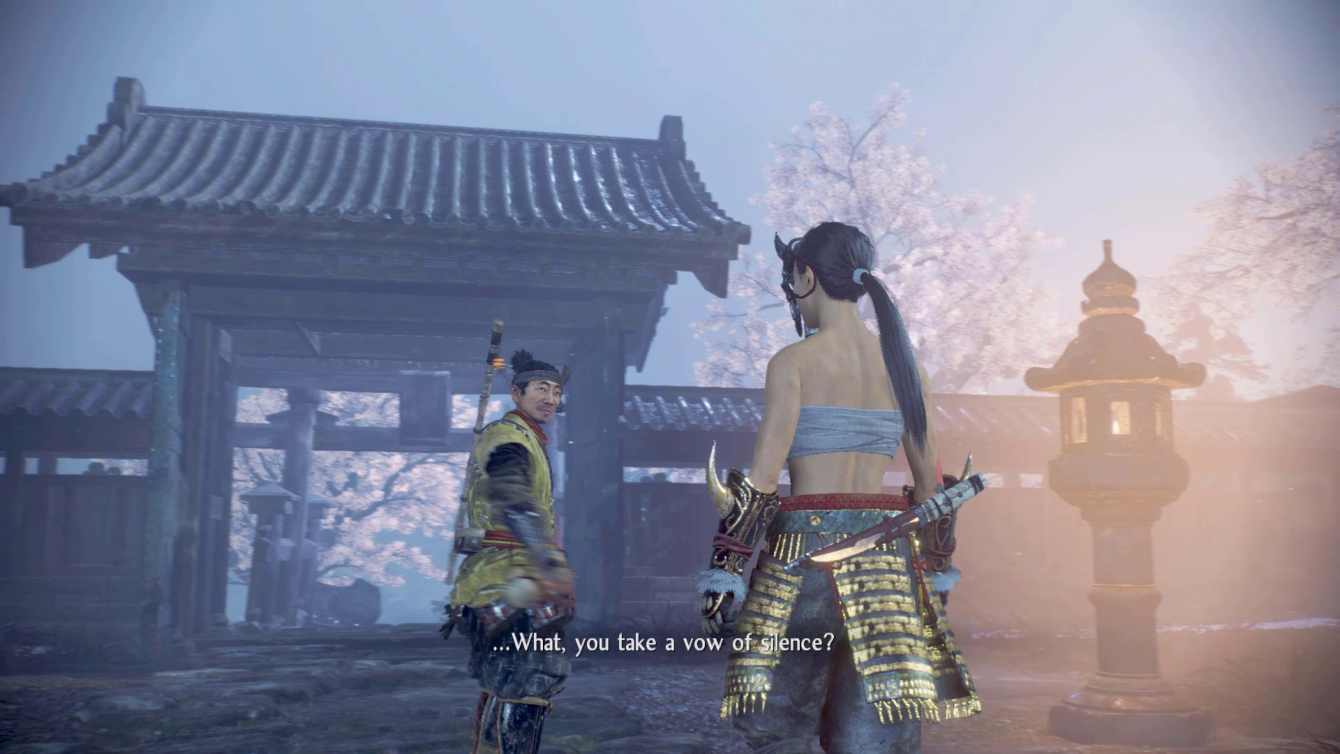