Soon, outright racism will be able to earn you college credit.

Florida State University was set to offer a Summer session history course dedicated to “The History of Karen” and examining how white women are “weaponizing white womanhood.” 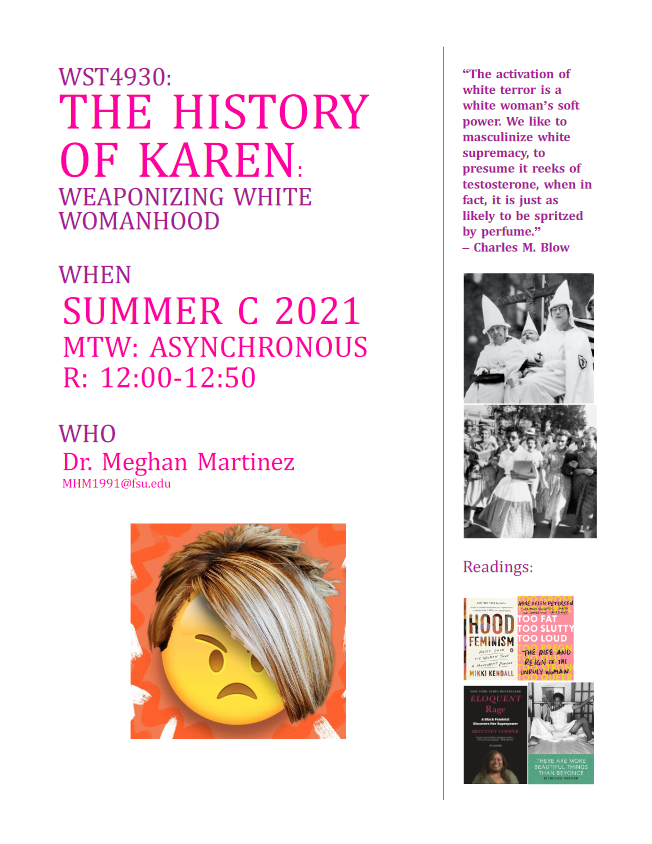 A flyer for the course features an emoji with a stereotypical ‘Karen’ haircut alongside a photo taken of two white women, the oldest member and mother to the youngest member of the Ku Klux Klan, in attendance at the 1920s Great Ohio Rally, and a photo of Elizabeth Eckford being yelled at by white women as she walked into the newly desegregated Little Rock Central High School in 1957.

It also features a quote from journalist Charles M. Blow that reads, ““The activation of white terror is a white woman’s soft power. We like to masculinize white supremacy, to presume it reeks of testosterone, when in fact, it is just as likely to be spritzed by perfume.”

The class would have been taught by FSU Teaching Assistant Professor Meghan Martinez, whose school profile notes that, “she primarily researches the history of racial violence and racial inequality in the US and its legacies.”

I use the past tense “was” because, according to the FSU History department’s website, the class is no longer present in their list of available Summer courses. However, an archive of the page proves that the class was, at one time, listed as a legitimate course offering.

Nobody likes Karens. There’s a reason there’s a shorthand word for that type of personality and behavior. But I would bet a good amount of money that, beyond the ‘haha funny internet meme’ in the title, the class would not have discussed the ‘Karen’ mindset, but instead would have served as pretext for nothing more than racist tirades against white women.

I think the fact that the class has been removed from the course listings is evidence enough that FSU is stupid for thinking that this course was anything remotely close to a good idea.

Recently, the state of Georgia passed bill SB 202, which will result in a number of changes to the state’s voting laws. Among many new changes, the state will now require ID to vote, provide a shortened period for early voting, and allow the State Election Board to suspend county election boards if they deem them to be underperforming.

In response to the passing of this bill, Logan director James Mangold announced that, in protest, he would no longer agree to “direct a film in Georgia,” a not-insignificant gesture considering how the state’s tax incentives have made it a popular production spot for Hollywood. 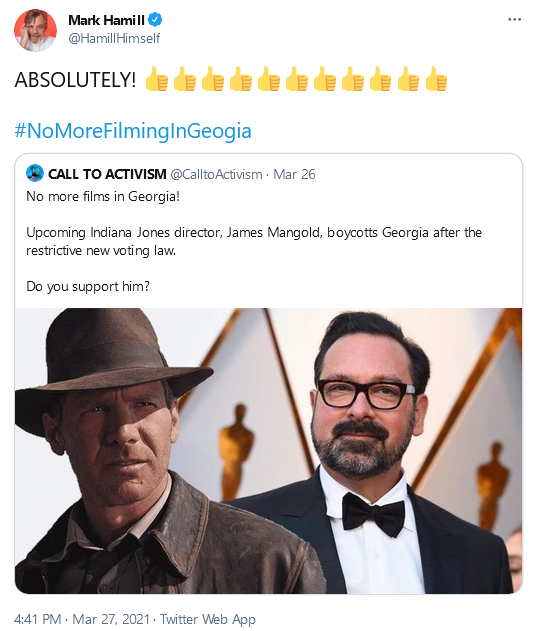 Now, I’m not here to talk about Georgia’s voting law changes or whether or not I support them. That’s not why Hammill has made the Daily Stupid.

No, he’s made it for his sheer hypocrisy, as while he supports a boycott against Georgia, he was completely silent on Disney’s continued courting of the Chinese government, despite their widely documented internment and abuse of the Uighyr people.

Isn’t it funny how blue checkmark activism only extends as far as their paychecks will allow?

As COVID-19 vaccines become more readily available for the average individual, a debate has sprung up around whether or not to require people to have ‘vaccine passports’, a piece of identification which denotes that the holder has been vaccinated, before entering public establishments or travelling.

On a recent episode of Jeremy Vine, a British talk show, Dr. Sarah Jarvis argued in favor of vaccine passports, stating that while she had historically “always been in favour of people having choice”, she believed COVID vaccinations should be mandatory.

Her argument? That “breathing is an offensive weapon if you are infected with Covid.”

"Breathing is an offensive weapon" says Dr Sarah Jarvis, so y'all had better just accept the #VaccinePassports 😠🤪#JeremyVine #JeremyVineon5 pic.twitter.com/YmUSMb6BxY

This is a Daily Stupid two-fer. The idea of mandatory vaccinations is absolutely stupid on its own, but trying to classify breathing as an “offensive weapon” in order to convince people to get vaccinated is far stupider.

By now, I’m sure you’ve heard of the games industry-supported petition calling on various governmental bodies, including the United Nations and US President Joe Biden, to prevent the release of the upcoming Iraq War-based FPS Six Days In Fallujah because it would “breed a new generation of mass shooters,” an argument as stupid as it is completely detached from reality.

It seems that the petition’s creator, Hala Alsalman, realized it was stupid too. The petition has recently been stealth edited to remove the fearmongering line regarding mass shooters, presumably to make it appear less insane now that it has a massive number of eyes on it, thanks to promotion by various gaming industry blue checkmarks. 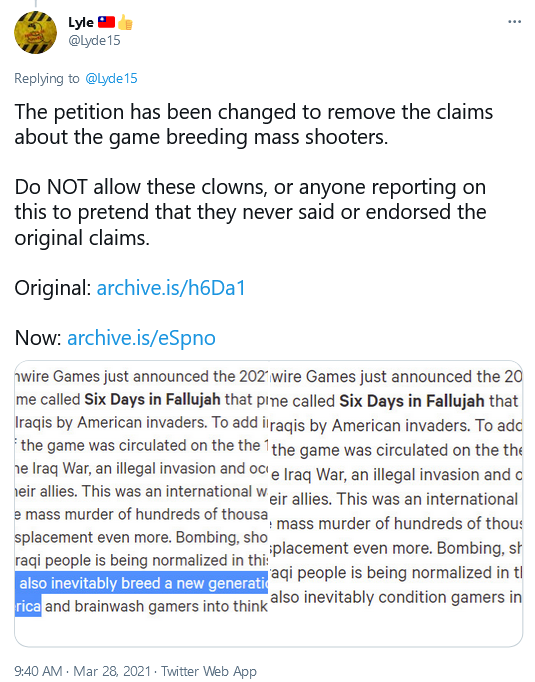 Alsaman’s attempt to sanitize her petition earns her a spot on The Daily Stupid, as not only has the petition’s original wording been reported on and archived dozens of times over, but thousands of users are unlikely to magically forget her words.

Who’s going to fall for this? You know what, don’t answer it. You’ll probably be spoiling a future installment of The Daily Stupid.