Welcome to another edition of The Daily Stupid, where we cover some of the dumbest and most idiotic things happening around the world and on the internet.

On April 16th, YouTube CEO Susan Wojcicki was awarded the Freedom Forum Institute’s first ever ‘Free Expression Award’, an accolade meant to recognize individuals for “their courageous acts of free and fearless expression.” 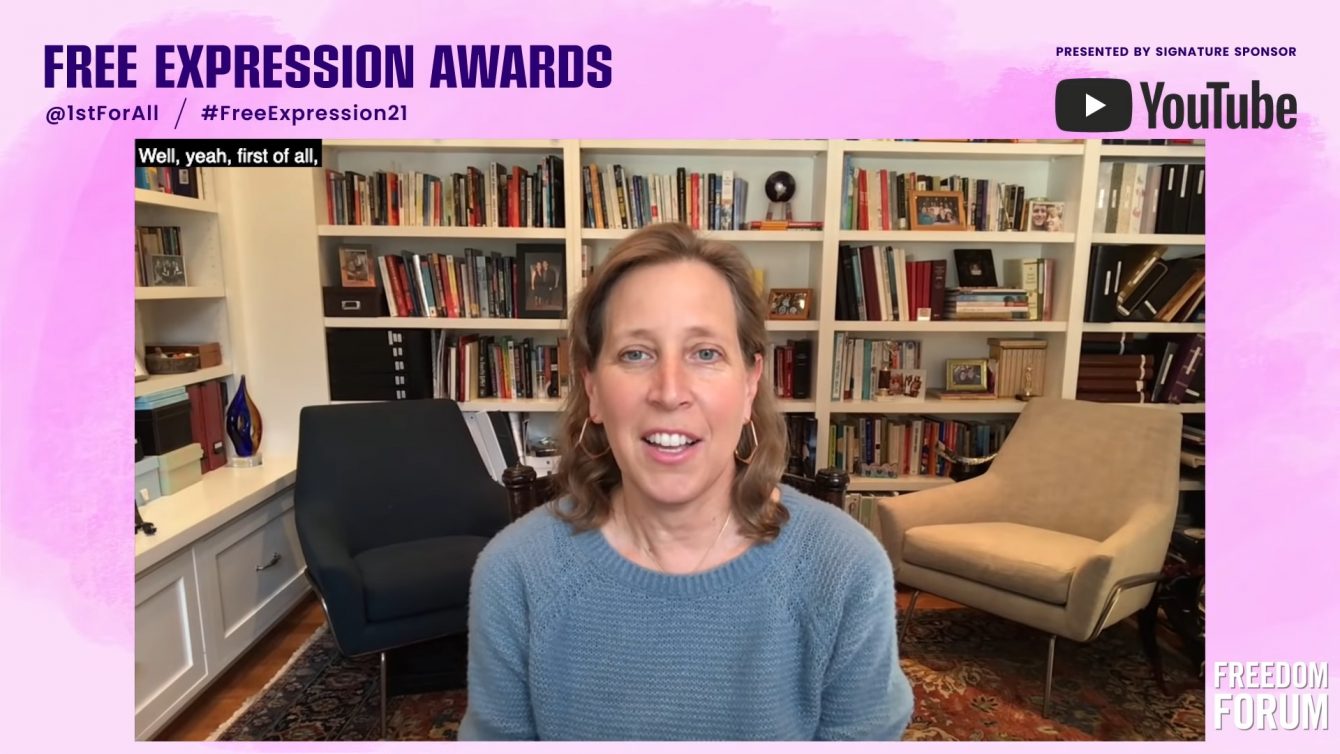 Ironically, upon receiving the award, Wojcicki boasted that “the freedoms we have, we really can’t take for granted,” and asserted that “we really have to make sure we’re protecting them in every way possible,” only to declare a few moments later that “we also need to make sure there are limits.”

“A lot of content that technically meets the spirit of what we’re trying to do, but it is borderline, and so for that content we will just reduce – meaning we’re not going to recommend it to our users,” added Wojcicki. 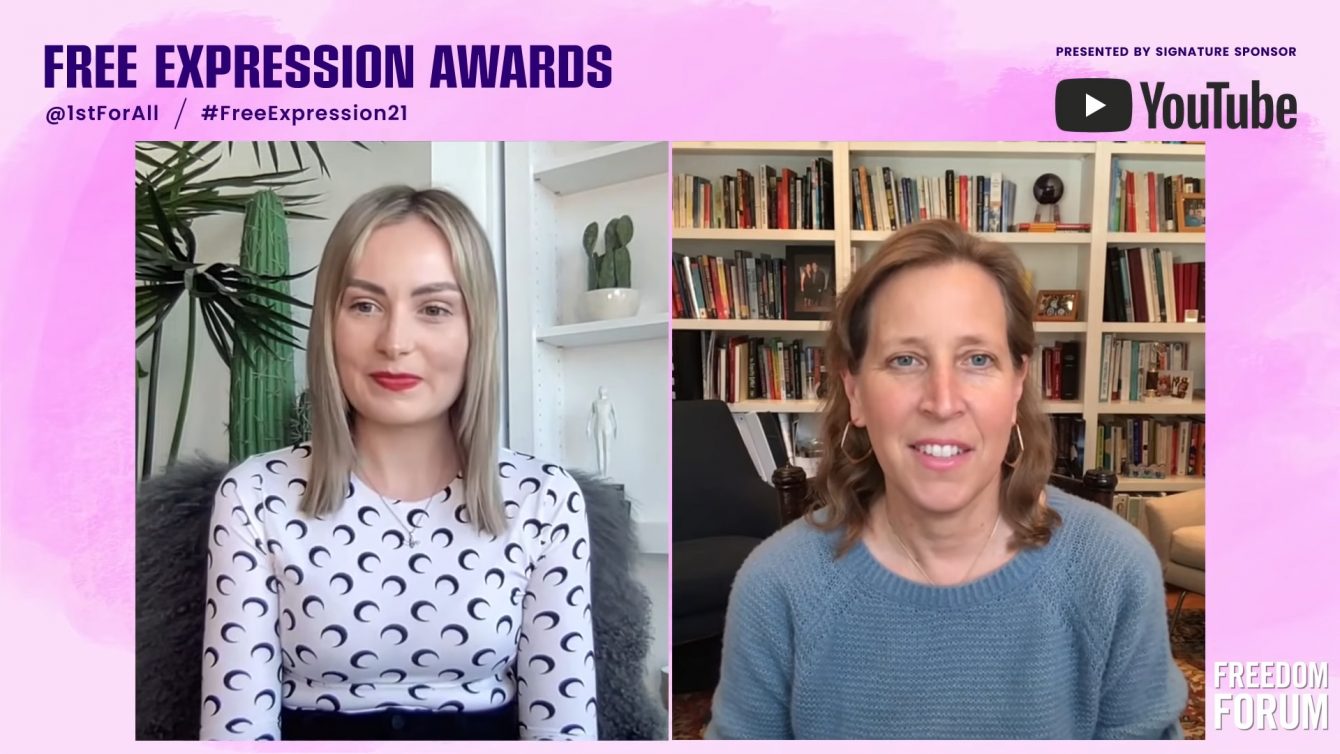 That’s right. The CEO of YouTube, whose platform is notorious for unjustly silencing and deplatforming a number of individuals from across the ideological spectrum, responded to being honored for her work “protecting” (and I say that with very strong, bold type air quotes) freedom of expression with an award from a first-time event sponsored by YouTube itself by declaring that the platform needs more censorship.

Ladies and gentlemen, you can’t make this up. It really doesn’t get any stupider than that.

2. Excuse Me, May We Ruin Your Life Over A $10 Donation To Kyle Rittenhouse?

In an April 16th report, The Guardian used information acquired from a “data breach at a Christian crowdfunding website” to publicly identify a number of “serving police officers and public officials [who] have donated money to fundraisers” for individuals the news outlet described as “accused vigilante murderers, far-right activists, and fellow officers accused of shooting black Americans,” as many had used email addresses associated with their jobs in various public government and law enforcement offices to make their donations. 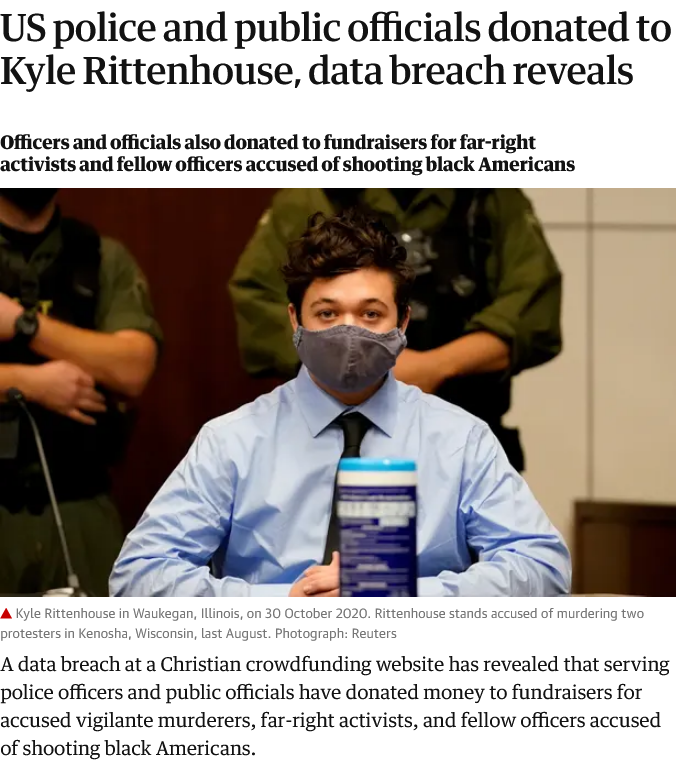 Among the various individuals identified in their report, The Guardian named Craig Shepherd as a Utah paramedic who donated $10 to the defense fund for Kyle Rittenhouse.

However, not one to be outdone by The Guardian’s public shaming tactics, ABC 4 Utah reporter Jason Nguyen took things a step further, not only going to the man’s house in an attempt to confront him regarding his donation, but also posting a picture of his house on his public Twitter account. 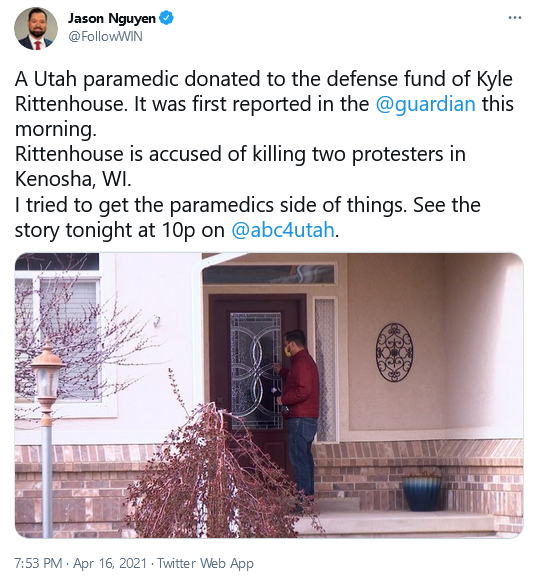 When met with backlash for his attempt to shame the paramedic, Nguyen argued that “the point here is that he shouldn’t have used his government email. He can donate, just like you or I to anyone he wants privately,” as if the use of a government email address warranted the public questioning of one’s donations.

To make matters worse, he further claimed “me going to his house is to get his side of the story” and noted that “I do the same thing to those who have crimes alleged against them, that goes for both sides of the law.”

“It’s so we make every attempt to get the [other side] so that we are balanced and that there is video proof of it,” he added.

I’m not sure which is more egregious, Nguyen’s attempted harassment of an individual for donating a mere $10 to a cause they supported or his earnest belief that he was in the position of the morally superior good guy.

Either way, Nguyen has more than earned his spot on The Daily Stupid. 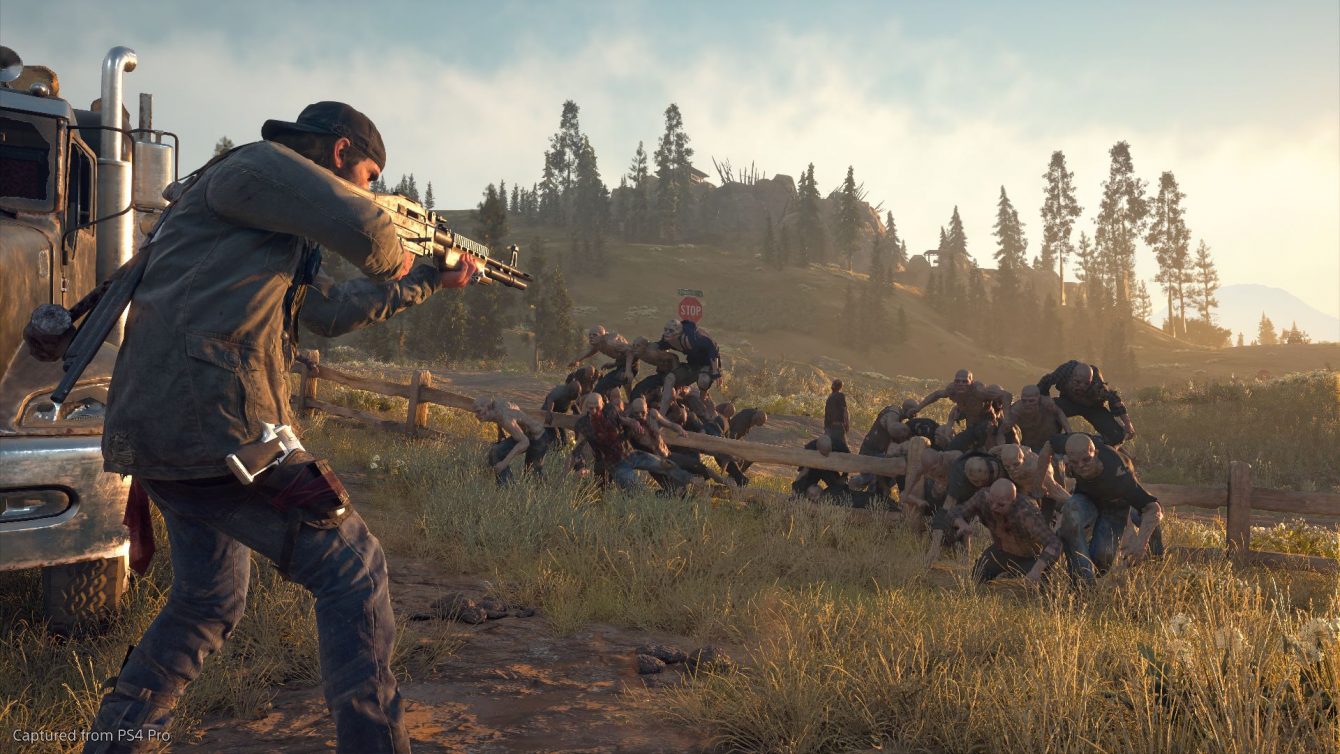 Recently, alongside a report noting that Sony has taken to shuffling resources around in order to support their blockbuster titles and studios, came news that due to this change in development philosophy, the company had passed on developing a sequel to Days Gone.

Though the game was less than a critical darling, plagued with bugs and performance issues both at release and following a number of patches, it still managed to find a fan base, many of whom were dismayed by the aforementioned revelation that Deacon St. John had ridden his last ride (#FreakerGang). 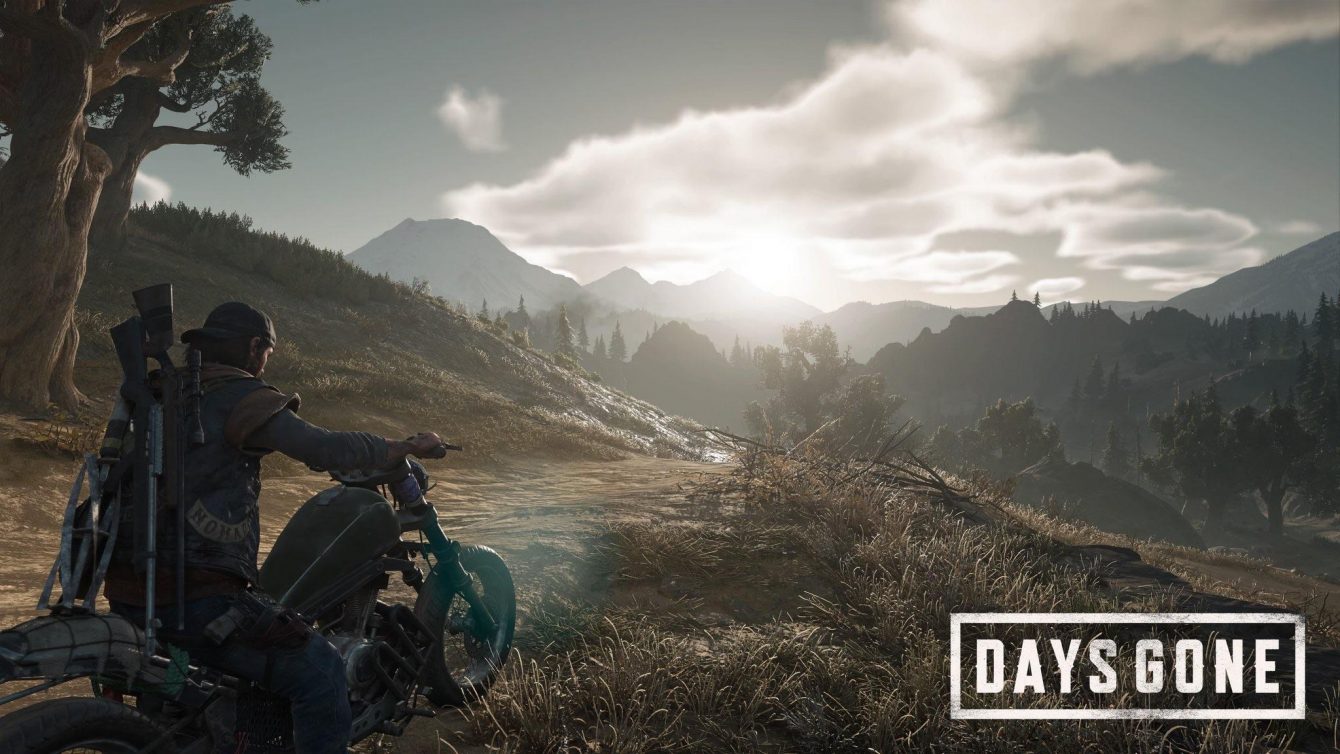 However, rather than blaming Sony mismanagement or the game’s own technical failures for the lack of a sequel, former Bend Studios creative director John Garvin has taken to blaming the end of Days Gone as a franchise on players’ refusal to buy games at full-price.

In a recent interview with God of War game director David Jaffe, Garvin declared, “If you love a game, buy it at full f—ing price. I can’t tell you how many times I’ve seen gamers say ‘yeah, I got that on sale, I got it through PS Plus, whatever.” 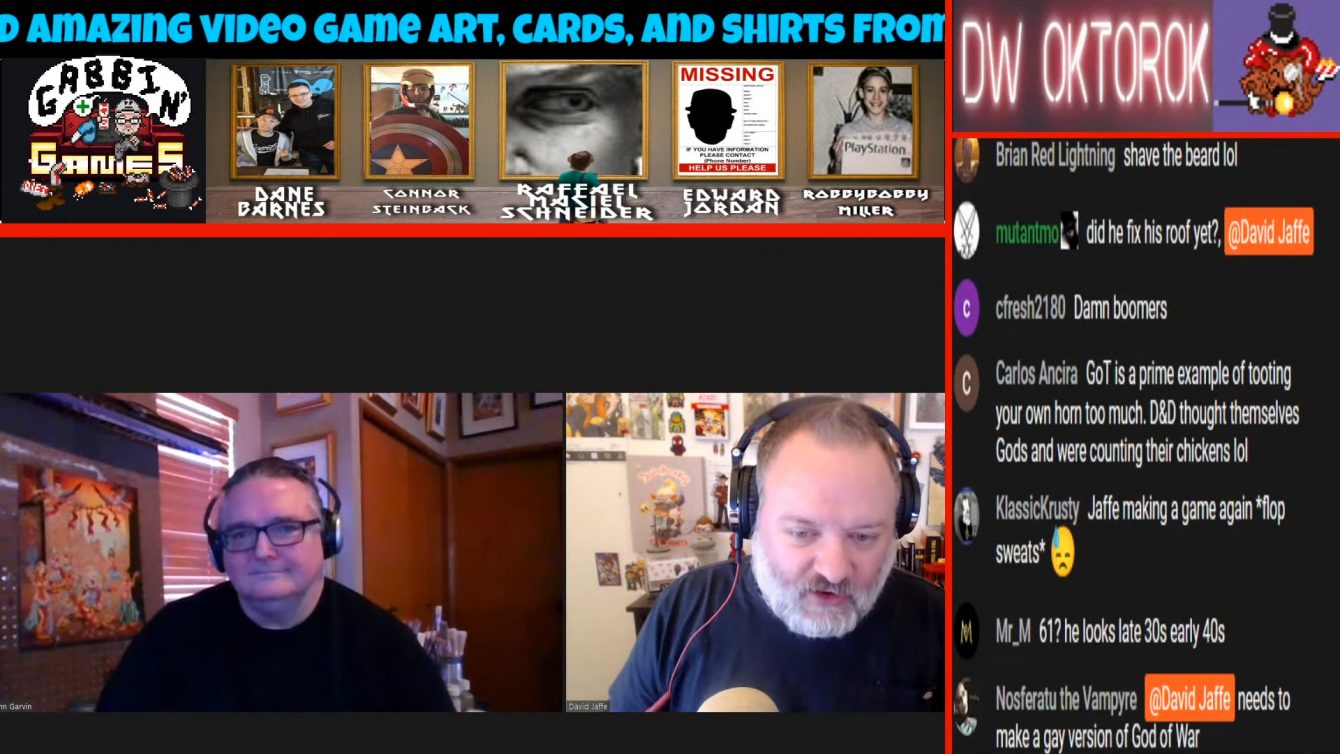 Garvin’s sheer anti-consumer audacity is impressive. Not only is he demanding that fans who discover a respective game long-after release somehow go back in time to pay full price for a game they didn’t know they’d like, but Garvin is also chastising players for not having unlimited money to spend on their every whim.

His game definitely wasn’t good enough to earn him this level of entitlement, but his reaction is enough to land him on The Daily Stupid.

This one is a doozy, and I think proof positive that everyone should just stop paying attention to Demi Lovato all together, forever. 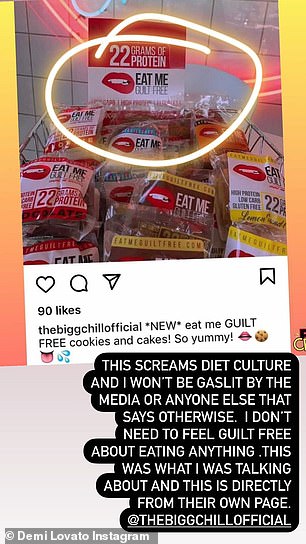 On April 18th, Lovato called out The Big Chill, an LA-based frozen yogurt shop, because the celebrity found it “extremely hard to order from @thebigchillofficial when you have to walk past tons of sugar free cookies/other diet foods before you get to the counter.”

Her offense was based on the fact that she bafflingly perceived the presence of ‘diet foods’ as a promotion of eating disorders.

“Do better please,” she pompously added. 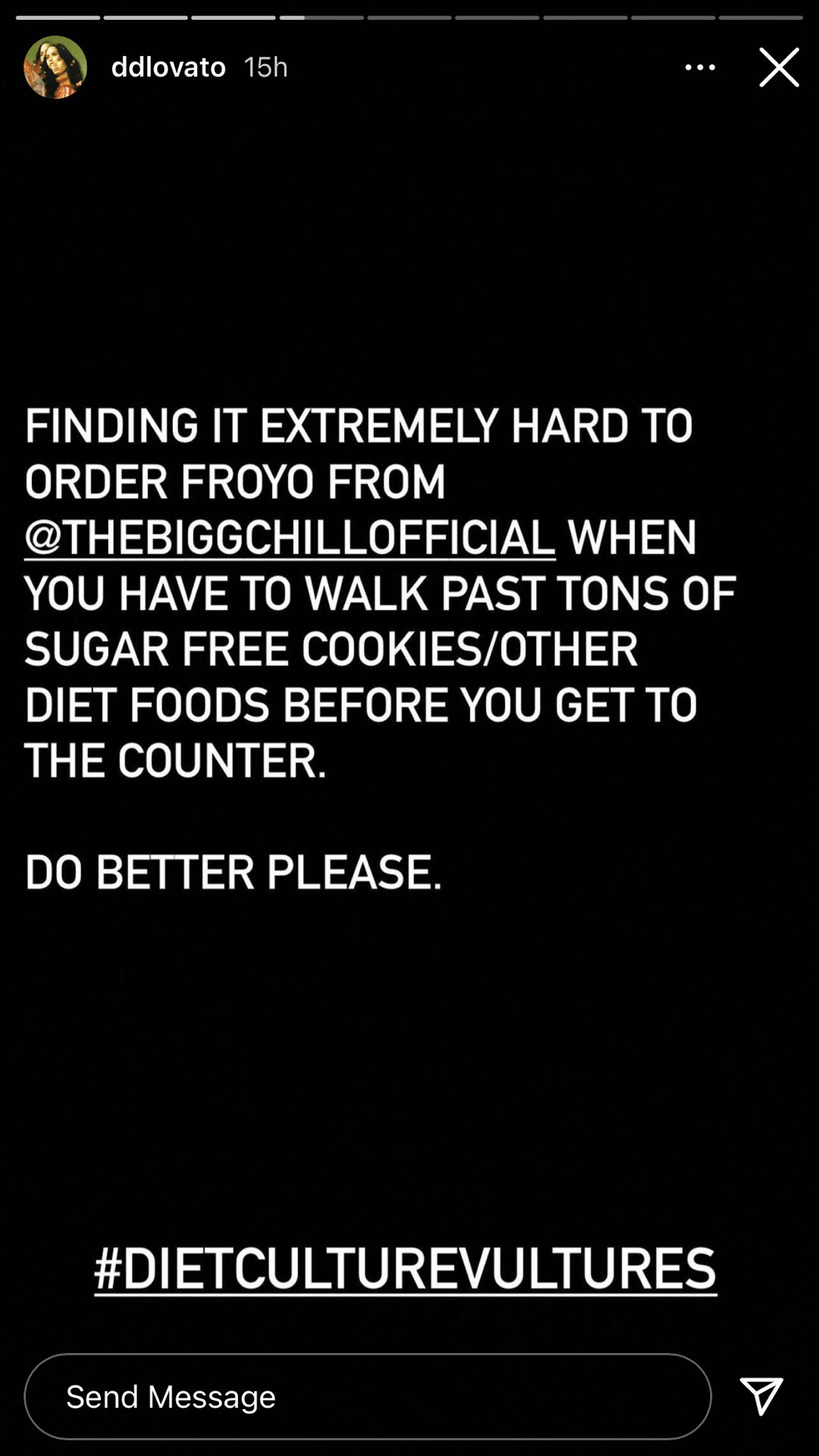 The Big Chill would later clarify directly to Lovato that “We carry items for Diabetics, Celiac disease, Vegan and of course have many indulgent items as well.”

Seeing as how the ‘regular’ foods are an expected norm and sweet options for those living with the aforementioned conditions are rare, it’s no surprise (and actually very thoughtful) for the specialty foods to be advertised more prominently to customers. 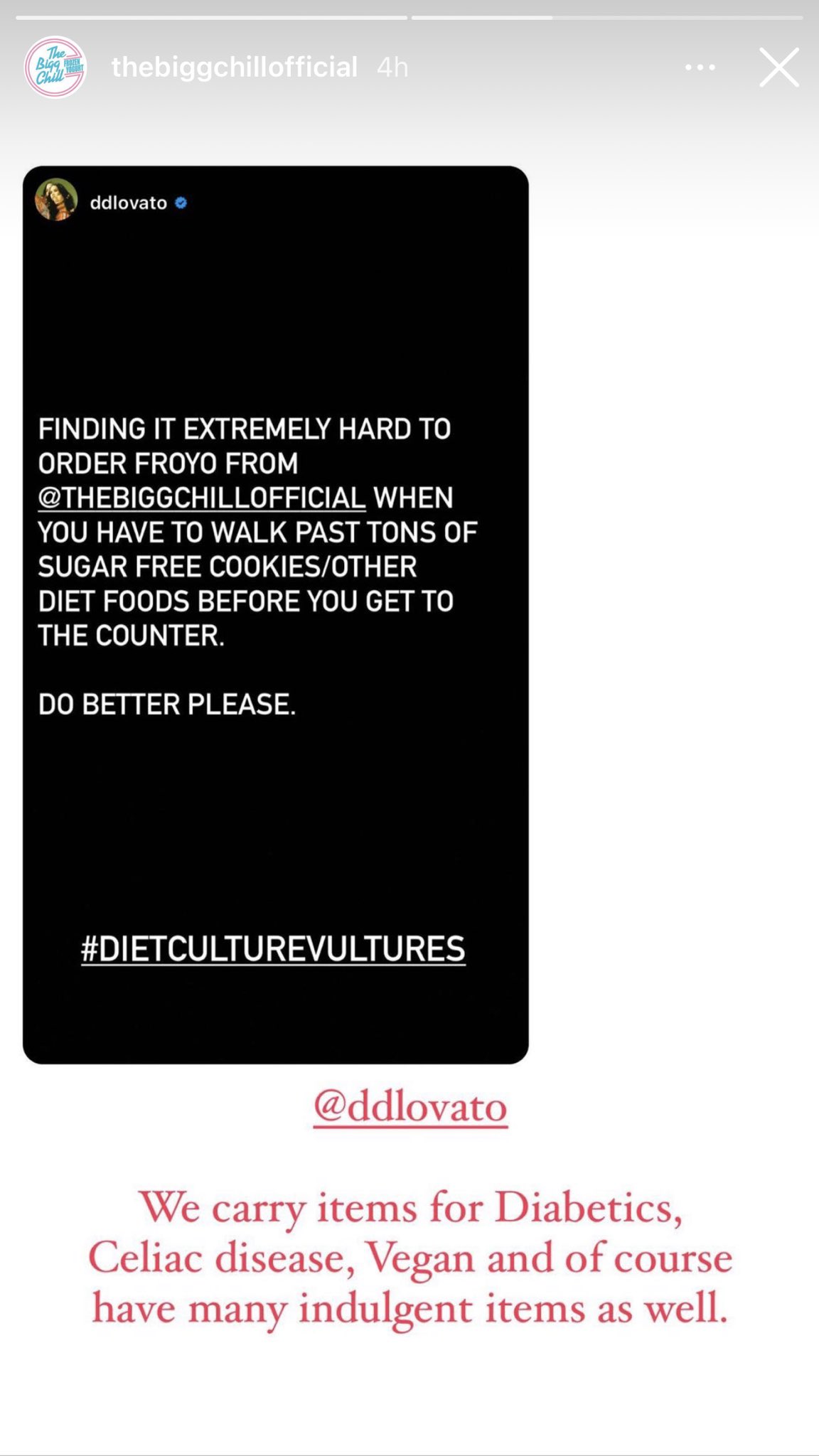 However, Lovato refused to admit that she was in the wrong, doubling down on her belief that she had some sort of moral high ground by declaring that The Big Chill had inspired her start the hashtag #dietculturevultures to refer to “harmful messaging from brands or companies [sic] that perpetuate a society that not only enables but praises disorded eating.” 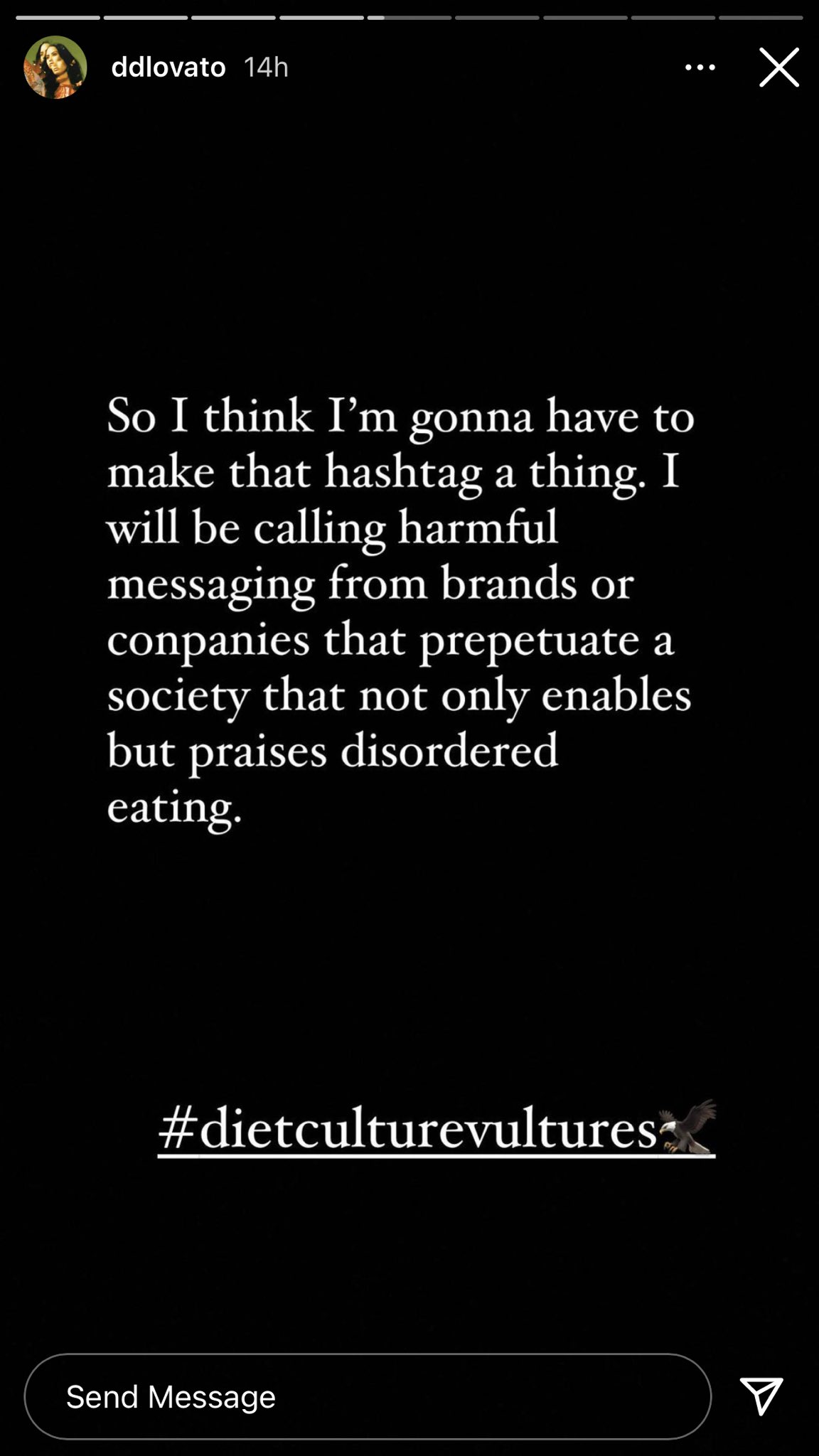 When The Big Chill pushed back and informed Lovato “We are not diet vultures. We cater to all of our customers [sic] needs for the past 36 years. We are sorry you found this offensive”, the singer responded by berating the store for not catering to her bizarre demand.

“You can carry things for other people while also caring for another percentage of your customers who struggle DAILY just to step foot in your store,” Lovato said . “You can find a way to provide an inviting environment for all people with different needs. Including eating disorders – one of the deadliest mental illnesses only second to opios [sic] overdoses” 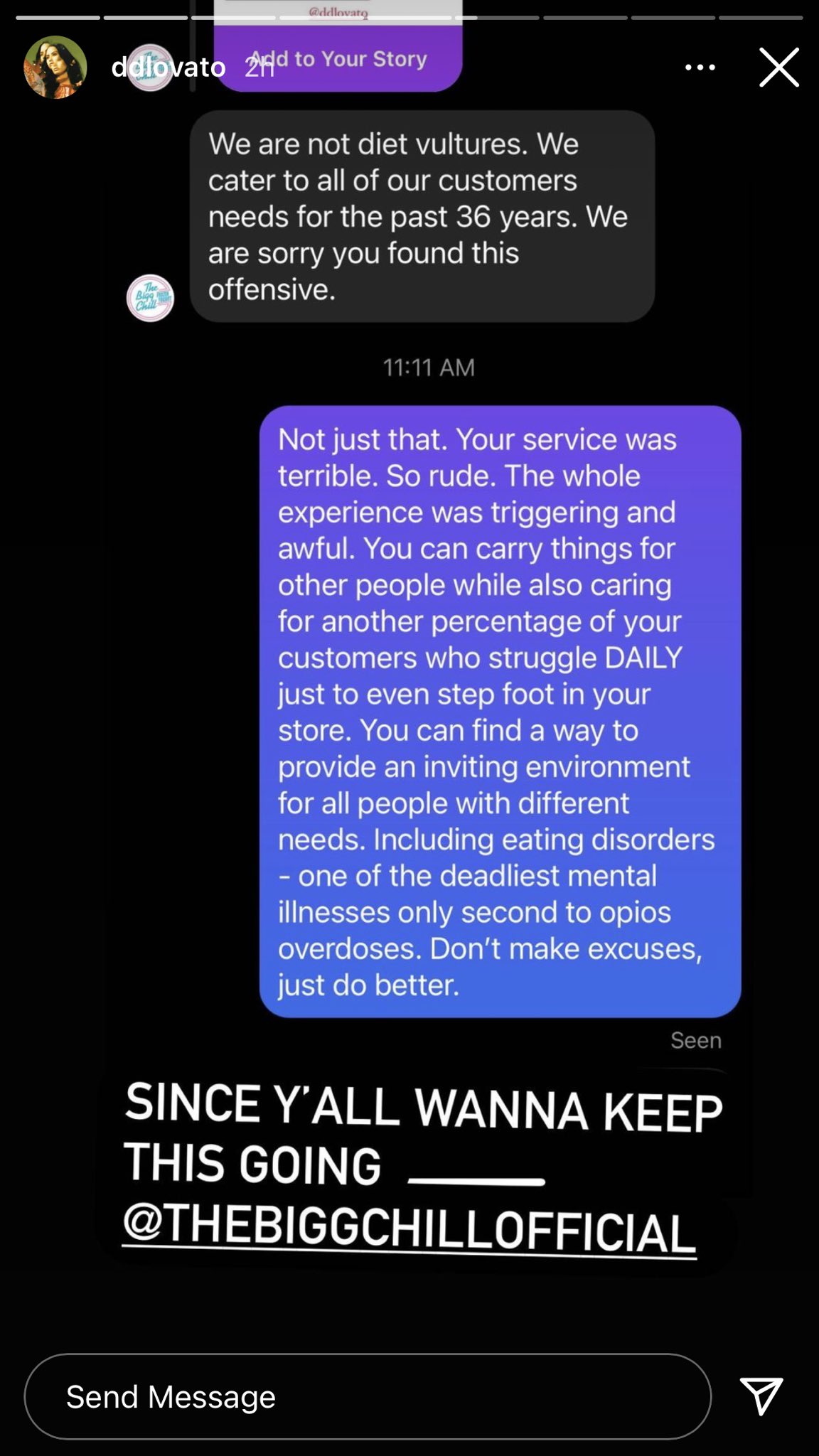 An hour and a half after attempting to publicly shame the store, Lovato posted a follow-up message on her Instagram bearing a much nicer tone, presumably an attempt to backpedal her self-centered cry for attention following pushback from the general public.

“I think clearer messaging would be more beneficial for everyone,” concluded Lovato. “You aren’t wrong for catering to many different needs but it’s about not excluding one demographic to cater to others.” 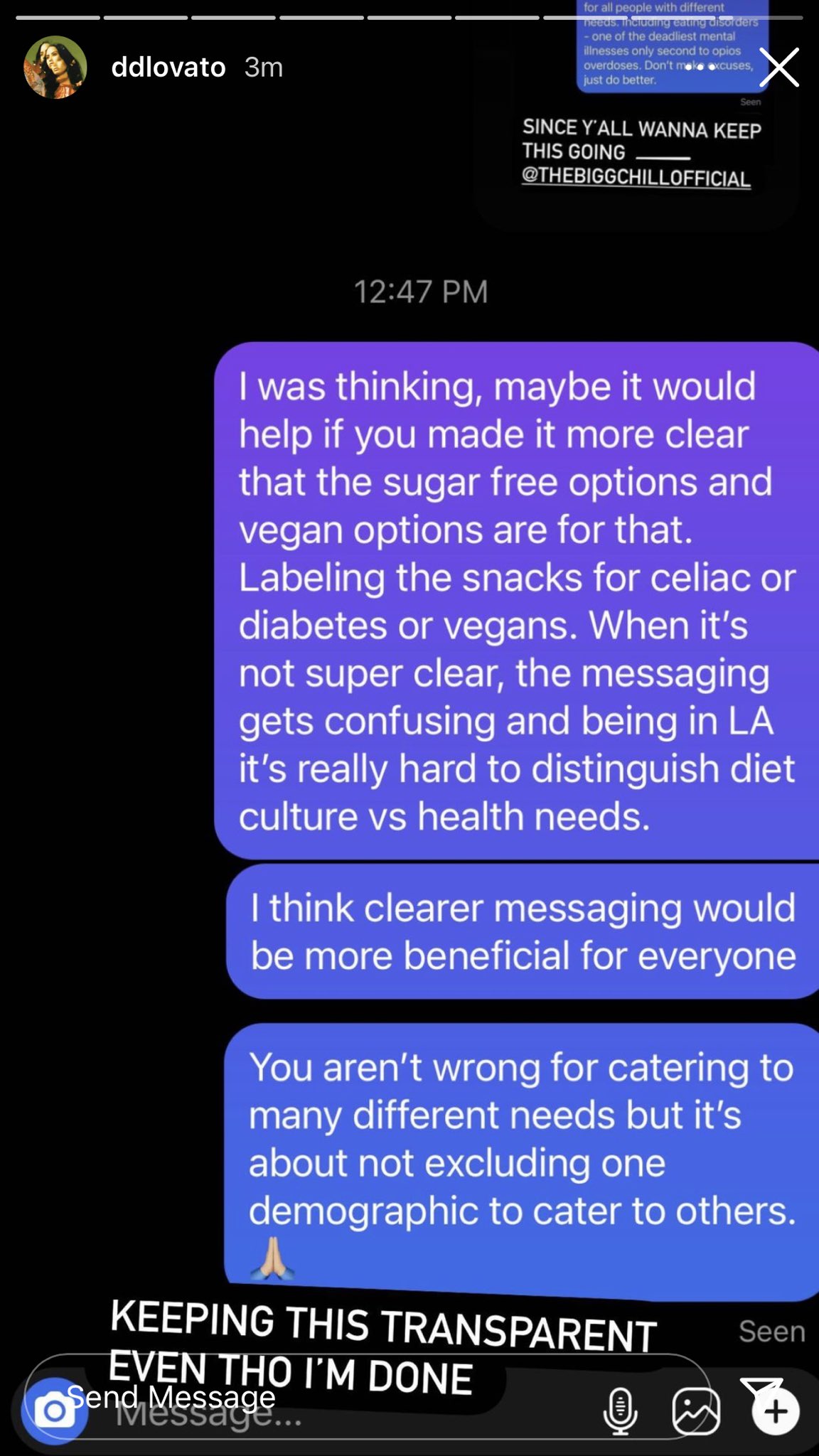 I genuinely don’t even know what to say about this. Lovato is an insane person. This is one of the most self-important displays of entitlement I have ever seen out of Hollywood. In fact, it’s so full of contradictions and false pretenses that I could spend an entire video breaking down just how stupid Lovato’s actions are, but in the interest of time, I’ll just say that Lovato’s spot on The Daily Stupid is well-earned.