Disney-owned ABC saw their Oscars ratings plummet to an all time low on Sunday night.

TVLine reports only 9.9 million people tuned in, while Deadline reports it was 9.85 million. Both publications cited Nielsen ratings. As for the key demographic rating it came in at 1.9.

TVLine reports that is a 58% decline in total viewership from 2020’s previous all time low and a 64% decline in the demographic rating. 2020 viewership was 23.6 million with a 5.3 rating.

A majority of TVLine viewers also gave the show an F rating. 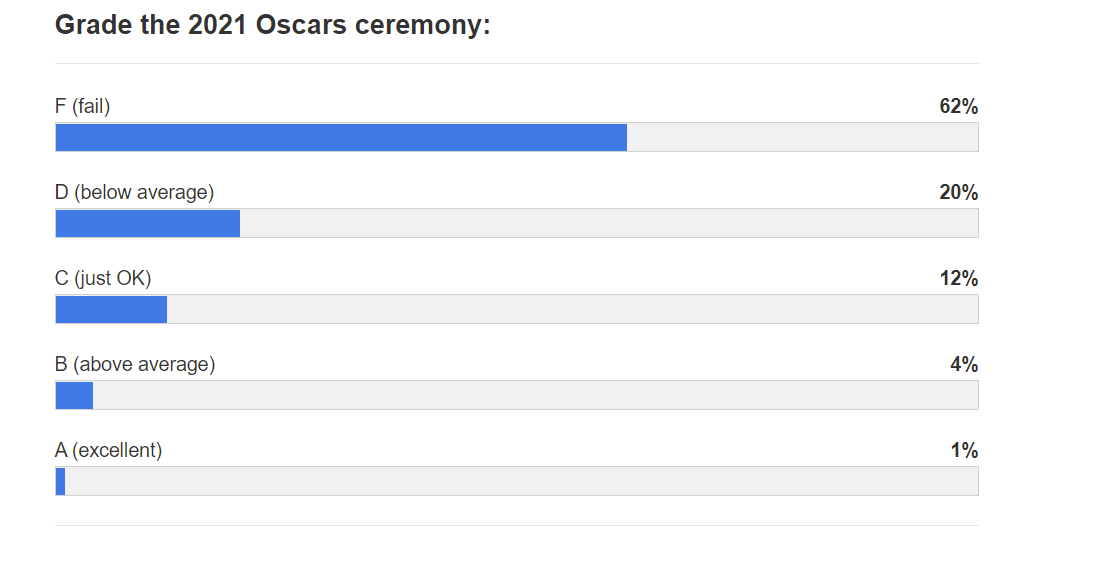 A majority of Bounding Into Comics followers on Twitter made it clear they didn’t even watch the awards show.

The poor ratings and viewership came after the Oscars ran a number of videos on their YouTube page titled “Why I Watch The Oscars.”

In one of the videos, Leslie Odom Jr. explained he watches the Oscars because “it’s a tradition.”

He added, “There are a couple of handful of things that are part of American tradition. Football on Sundays. The Super Bowl. Championship this. All Star that. And the Oscars are a part of that. They are part of our tradition.”

With only 9 million people tuning in, in a country of over 350 million, the Oscars are most certainly not an American tradition anymore.

The record low ratings follows as awards shows in general have declined in viewership.

The Grammy Awards this year declined to a total viewership of 8.8 million although it had a 2.1 in the key 18-49 demographic. That was down from 2020 where they had 18.7 million viewers and a 5.4 rating in the demo.

The Golden Globes also saw their viewership plummet. The show only brought in 6.9 million viewers this year and a 1.5 rating in the key demo. In 2020, the show was watched by 18.4 million and had a 4.7 rating.

As for why the ratings are so low, it’s probably a number of factors. One of those is definitely the fact that no one probably even heard of any of the films that were actually nominated for Best Picture given most theaters in the United States were shut down for a majority of the year.

On top of the Best Picture nominees being completely irrelevant, Americans are also probably worn out by Hollywood celebrities pontificating and lecturing their viewers about how holy and moral they are, when in fact more stories come out on an almost daily basis about how terrible Hollywood is as an industry.

What do you make of the Oscars award seeing viewership below 9 million?