After a week of attempting to contact the company in regard to overturning his recent ban from the social media platform, Adam Waldman, an attorney representing Johnny Depp in his ongoing legal battles with ex-wife Amber Heard, has been informed by Twitter that his ban will be upheld on the grounds that he allegedly violated the site’s policy regarding private information.

According to messages obtained by YouTuber ThatUmbrellaGuy and released with Waldman’s permission, Depp’s attorney first reached out to Twitter near immediately following his April 20th suspension.

In his first message to a member of Twitter’s administration team, Waldman asserted that two of his colleagues had contacted the site about opening a verified account for Depp and overturning Waldman’s own suspension, only for them to allegedly inform Waldman that they had not received a response from the social media platform.

“I respectfully request that my account be reinstated,” wrote Waldman. “And I would also like to be verified which, as I understand it, makes this less likely to occur in the future.” 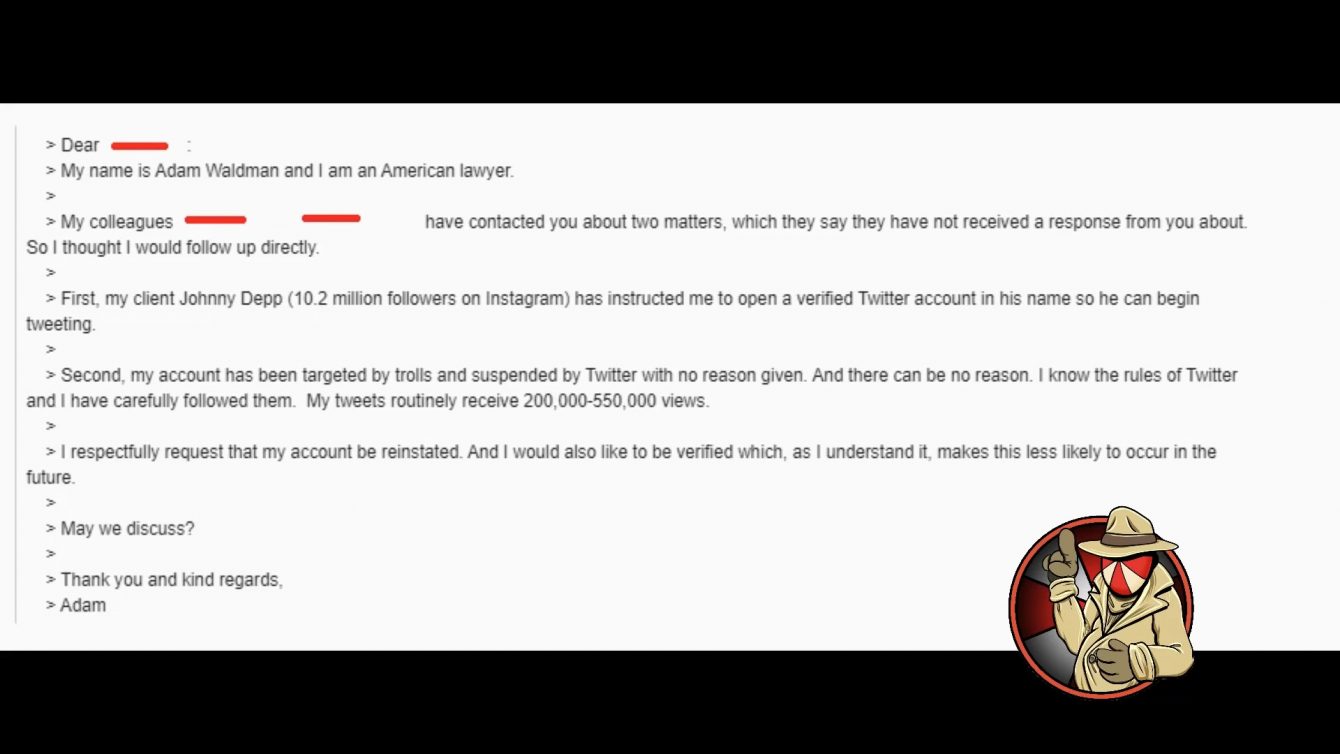 Shortly after, Twitter seemingly responded to one of Waldman’s aforementioned colleagues regarding the opening of a verified account for Depp “but not a word about” Waldman’s, which prompted the attorney to further request “a response about my suspended Twitter account please”.

“No email has been sent to me explaining why despite repeated promises,” Waldman added. “No notice was given. No reason was provided. Perhaps my suspension was a mistake that Twitter intends to remedy. Perhaps it is something else, and I will need to take other action.” 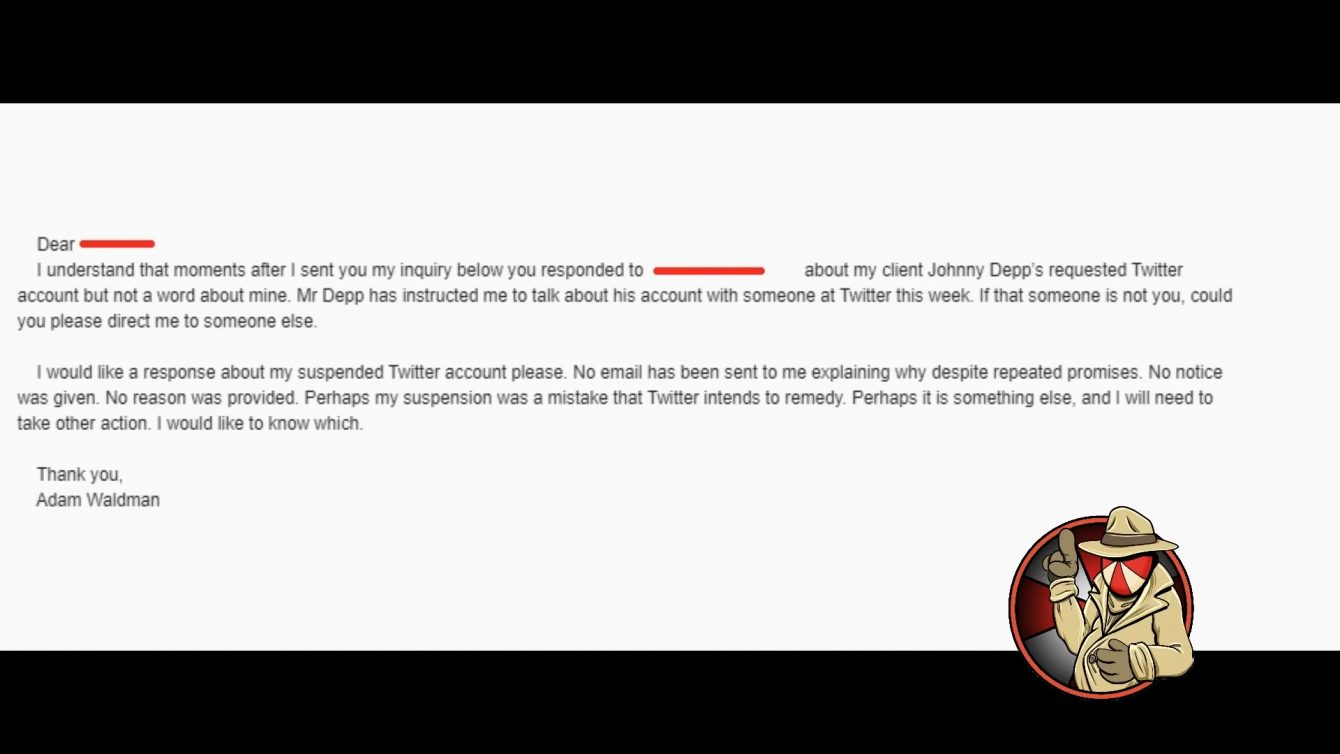 Again receiving no response, Waldman sent a third message regarding “setting up a verified Twitter account for my client Johnny Depp” and “unsuspending my Twitter account, which was shut down without any of Twitter’s procedures and process, including notice, expression of basis, and what to do.”

“When does this suspension end?” Waldman proceeded to ask. “Does something need to be filed to end it? Why was I singled out and treated differently regarding notice than any other suspended account? In the meantime, my voice is silenced.”

Continuing, Waldman noted that, as Depp “is one of the highest grossing actors in Hollywood history,” he found it “concerning that nobody responds to me.” 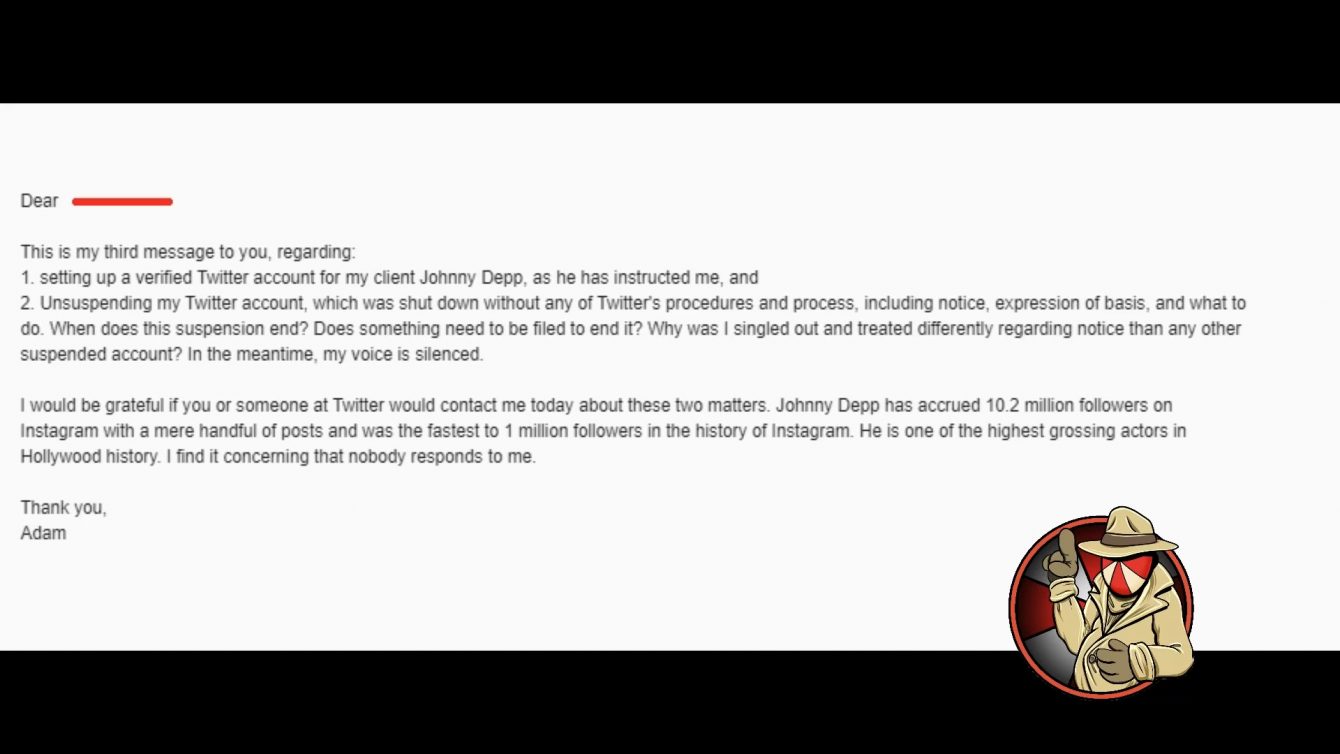 Finally, Twitter would respond, explaining to Waldman that they had confirmed “receipt of your correspondence” and had “asked the relevant team to look into your case,” promising to “be back in touch after the weekend with any update.” 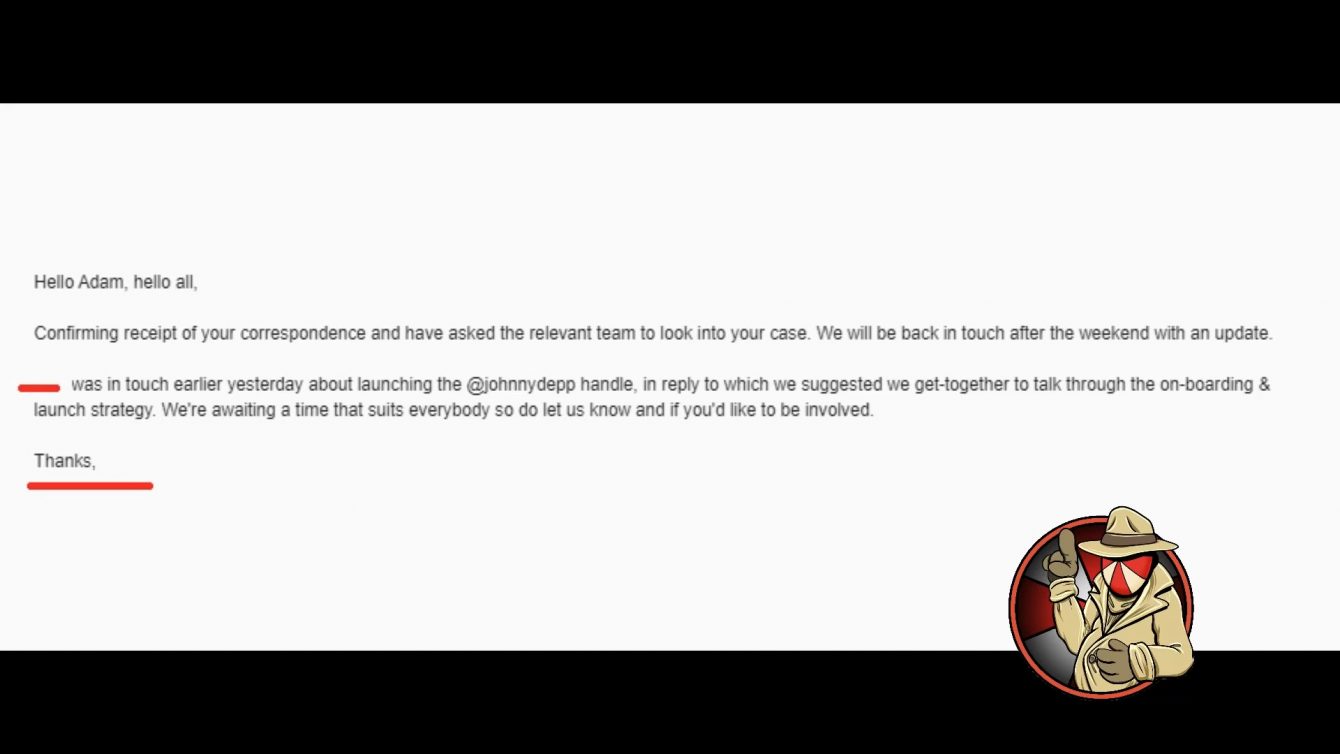 However, Waldman soon found himself once again allegedly ignored by the social media platform, a development which led him to send an additional follow-up email regarding his suspension.

“I noticed Twitter has received a large outpouring of complaints from the public about the suspension of my account,” said Waldman. “Many of these Twitter users are domestic abuse survivors, men and women, who have also been attacked on line and been the subjects of targeted complaints to silence them. I suspect this is what happened to me.” 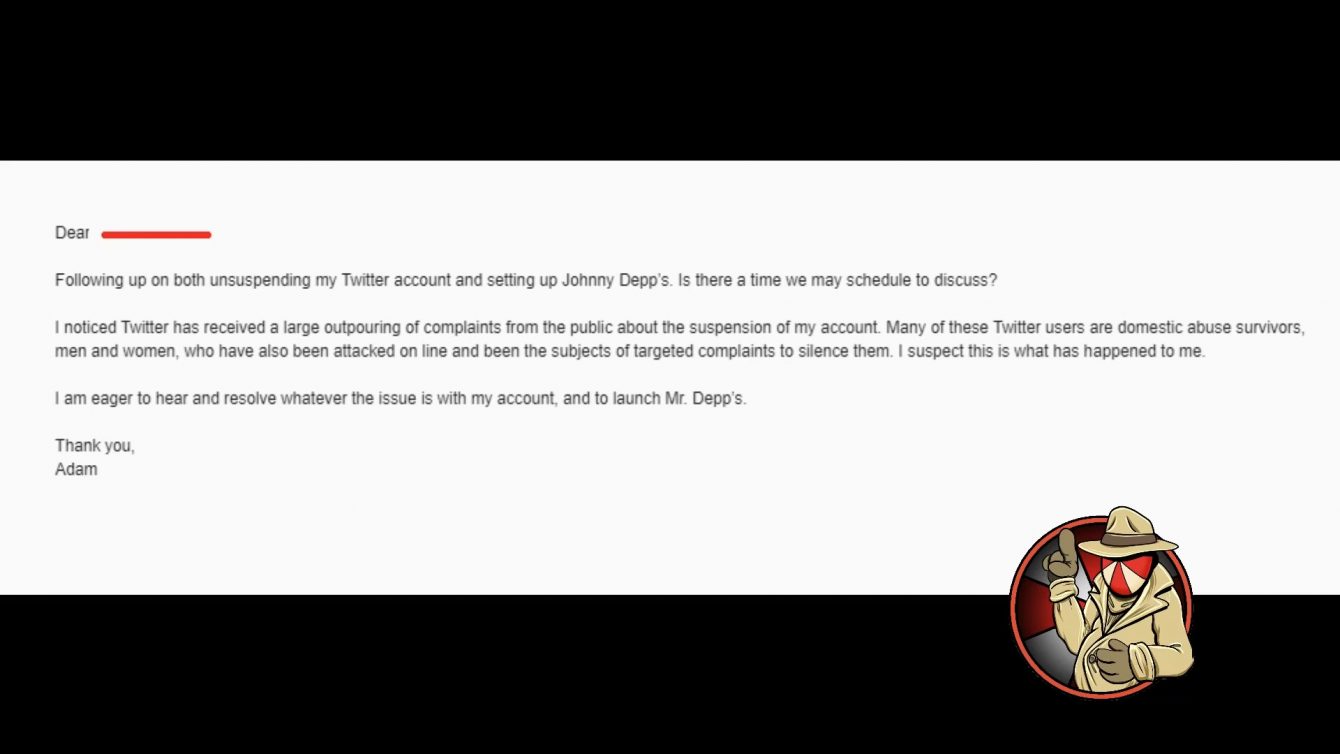 Unsurprisingly, Waldman’s follow-up did not receive a response, a silence which in turn led to him sending yet another message to Twitter.

“No reason was provided despite repeated promises to do so,” a frustrated Waldman stated. “And there can be no reason; I did not violate Twitter policies in any respect. I post only public legal documents, news articles and occasionally cultural references like song lyrics to show the truth of a public matter. I express no personal opinion outside the 4 corners of those public documents.”

He also added that, “in my experience as a lawyer representing high profile people, it is unusual that no one from Twitter has gotten back to me about opening up Johnny Depp’s Twitter handle.” 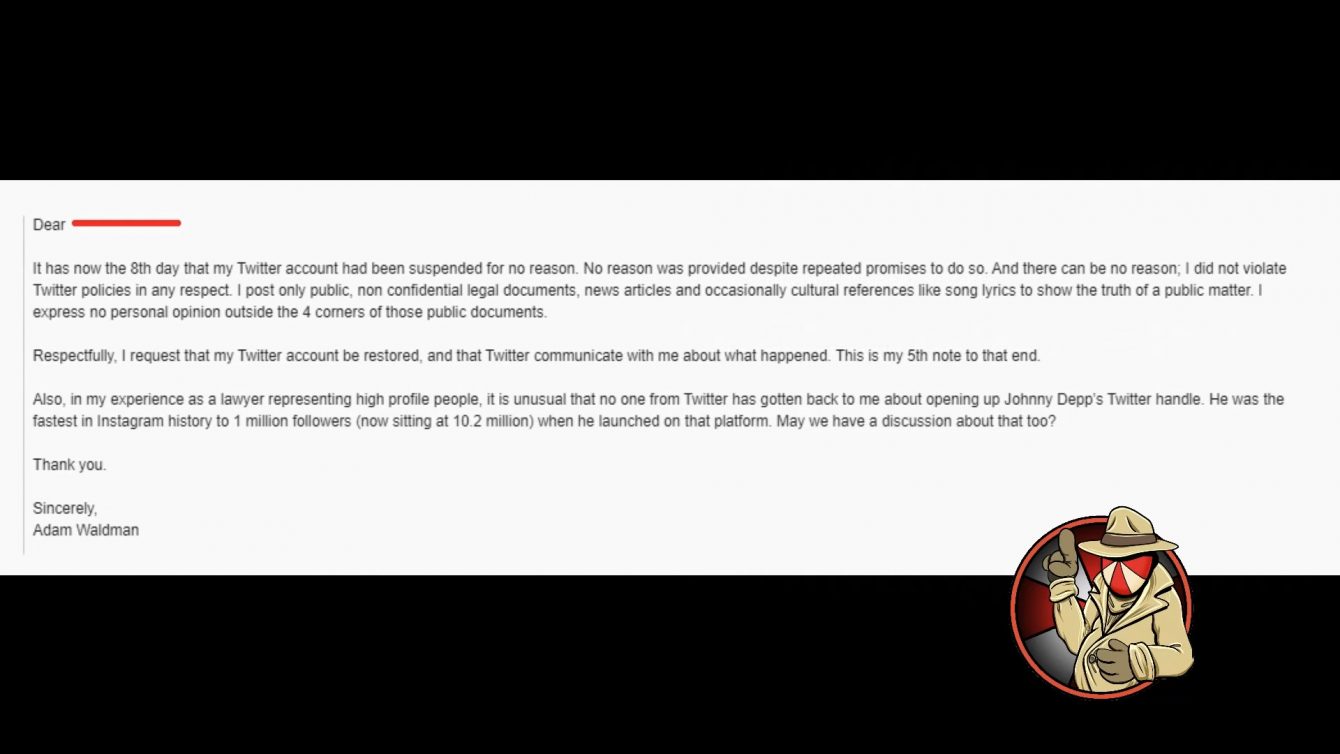 “There is no appeal recorded but I have asked the team to review in light of our correspondence,” noted the Twitter employee who messaged Waldman, before adding “this has not been successful.”

Regarding the setup of Depp’s account, the unnamed Twitter employee further invited Waldman to reach out to those who would be involved in the account’s on-boarding. 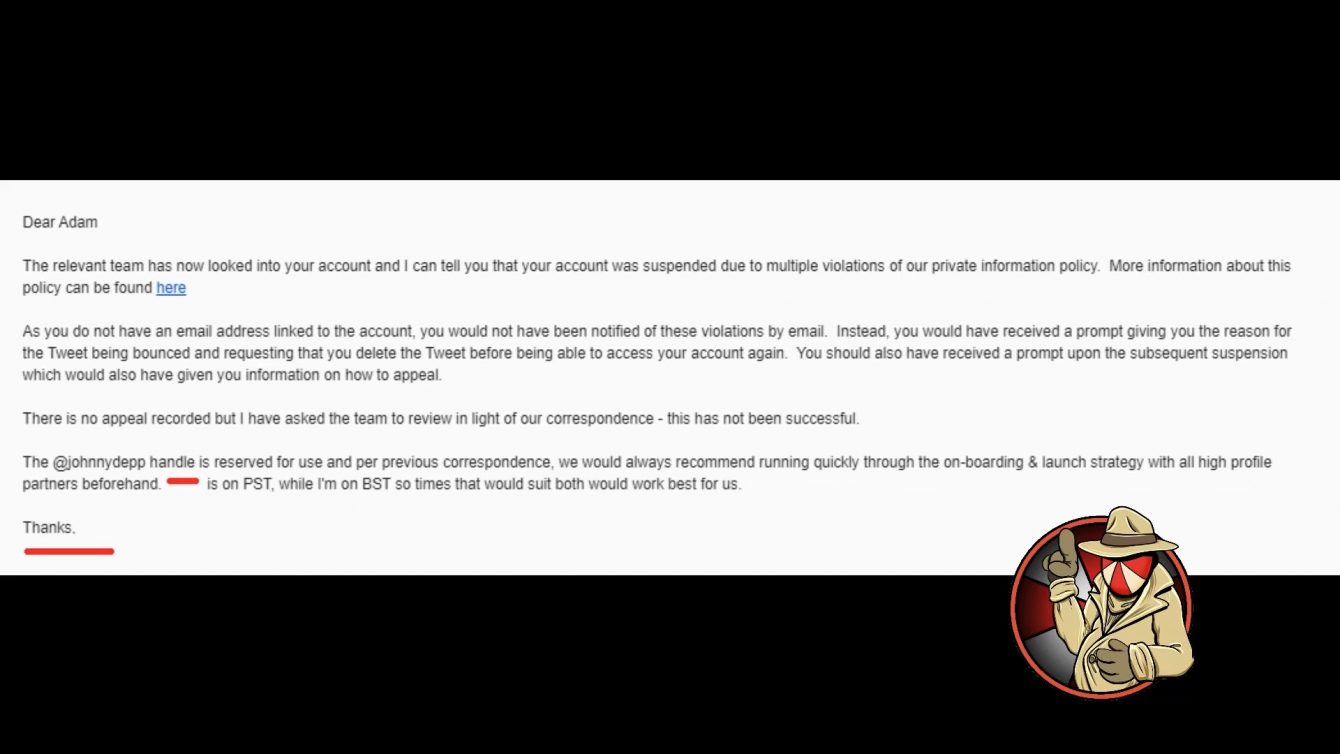 It should be noted that, regardless of Twitter’s poor customer service or the veracity of the information he provided, Waldman’s claim that he expressed “no personal opinion outside the 4 corners of those public documents,” is less than apt.

According to archived versions of a number of tweets saved from his account before it was suspended, Waldman can be read sharing a number of his opinions (as well as documents related to the case, though it is unclear yet whether anything that he shared violated Twitter’s Private Information Policy) regarding various subject du jours related to the still on-going legal battle.

In a discussion of recent testimony from responding law enforcement officials who claimed they did not see any evidence of a ‘trashed’ apartment, which Heard claims was the result of a violent outburst from Depp, Waldman wrote “what a messy crime scene LAPD ‘behavior’ refused to see…” 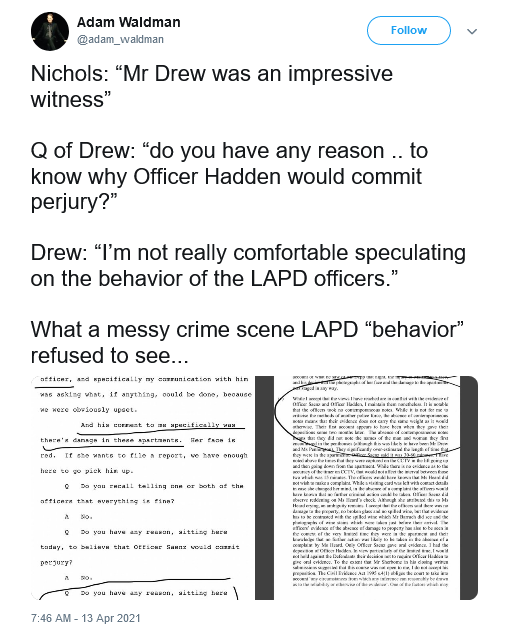 In another Tweet, pointing to how Heard claimed that Depp “smash[ed] her in the face w ringed fingers” and splattered her blood on a fridge that hadn’t been purchased until more than a year after the alleged incident, Waldman opined that “#NoEvidenceIsEnough”. 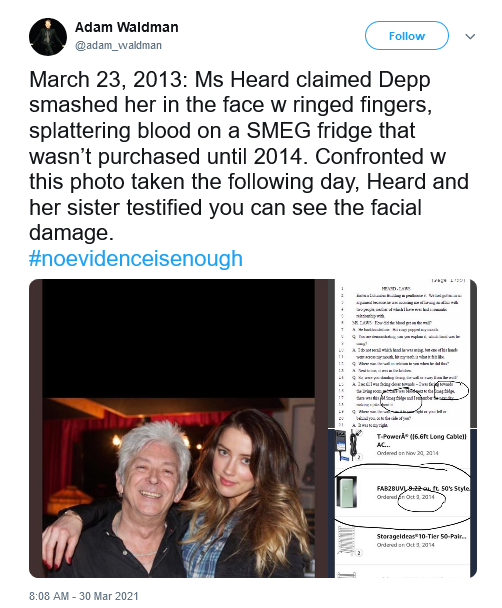 Though Twitter did not specify which aspect of their Private Information Policy Waldman had violated, it’s likely that his account was removed on the basis of his assumed intent, as said policy notes that site administrators “also factor in the intent of the person sharing the information.”

“For example,” reads the policy, “if we believe that someone is sharing information with an abusive intent, or to harass or encourage others to harass another person, we will take action.”

This is not the first time Waldman’s Twitter activities related to Depp’s case have landed him in hot water.

In July of last year, amidst Depp’s defamation lawsuit against UK tabloid The Sun, Waldman was reprimanded by High Court Judge Nichols after tweeting “In Memoriam Elon Musk’s decorator Laura Divenere” in response to supposedly inconsistent testimony given by the woman, who found herself involved in the case due to her role as Heard’s interior designer.

Later that same year, in October, Waldman was dismissed from Depp’s Fairfax County, VA lawsuit against Heard after Chief Judge Bruce White found the attorney to have shared confidential information covered under a protective order with members of both the press and Twitter.

What do you make of Waldman’s continued ban from Twitter? Let us know your thoughts on social media or in the comments down below.