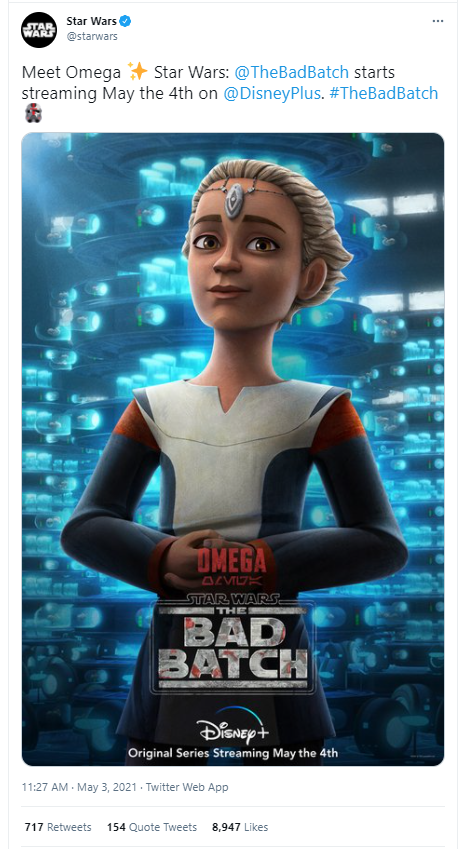 In the episode, it is revealed that Omega is a defective clone like the rest of the Bad Batch.

Tech explained during the episode, “When Nala Se spoke of five clones, Tarkin assumed that meant us, but Echo’s a reg. The fifth is Omega.”

He added, “I confirmed my suspicions after analyzing her DNA while we were in the infirmary.”

Not only is it revealed that she’s a genetically defective clone like the rest of the Bad Batch, but it appears she can predict the future too or at least has some knowledge about the inhibitor chips placed in the clones.

After the Bad Batch are detained for failing to execute their mission in the Onderon Sector, Omega, who is also detained with them, has a conversation with Crosshair.

Crosshair is then taken away and experimented on by Tarkin, who asks the Kaminoans to intensify the programming of his inhibitor chip.

The process works and Crosshair leads a squad of clone troopers to detain the rest of Bad Batch as they attempt to escape the planet.

He is foiled when Omega picks up a blaster, a weapon she readily admits she’s never used in her life, and is able to use it to hit Crosshair’s sniper rifle out of his hand on her first shot.

That’s right she beat the Bad Batch’s expert sniper at his own game using a blaster rifle.

Her shot and the intervention of the Kaminoans preventing the bay hangar doors from closing allows the Bad Batch to escape.

As for her dazzling display of skill, she is questioned by Hunter about it. He asks, “Where did you learn to do that?”

She responded, “I don’t know. I never fired a blaster before. I guess I got lucky.”

What do you make of this new member of the Bad Batch? Do you think this is the making of another female Mary Sue character in Star Wars?