As first reported by YouTuber Drunk3PO, Nessa from Project Stardust claims that the clones in The Bad Batch are “distinctly whiter than other clones.” Not only that, but Nessa also claims that “they perform better than the average clone.”

Project Stardust’s Nessa is not the only person who feels this way. The activist cited fellow activist and Tumblr user clonehub, who has created the website unwhitewashthebadbatch.carrd.co.

In fact much of Nessa’s article is based off the opinions of clonehub, who claims, “The Bad Batch has been whitewashed in two ways: through their visual and physical design, and through their voice actor.”

Clonehub continues, “Dee Bradley Baker is a white man from Colorado who was chosen to play a group of men of color with an ethnically-tied dialectical accent.”

He adds, “If it still isn’t clear, Baker being white and doing this accent is equivalent to him being hired to play a Black character and then poorly attempting an African American Vernacular English accent (aka “blaccent”, ebonics, etc.). It’s racist.”

Clonehub goes on to point out what he considers to be the problems of each of the individual members of The Bad Batch.

For Hunter he claims, “While his skin is leaning toward the darker side out of everyone on The Bad Batch, it still isn’t where it should be.”

He adds, “When his white squad members antagonize and pick petty fights with the regular clones, he rarely steps in to stop them.”

It’s a load of crap. In the first episode where The Bad Batch are introduced Hunter breaks up a fight between the regs and The Bad Batch and tells Wrecker to drop one of the regs. He literally says, “Wrecker, drop him. Now.”

For Crosshair he states, “He has light skin with a yellow undertone, a very narrow, long face and nose, a narrow jaw, and a small mouth. He’s shaped like a sniper rifle. He looks nothing like the Māori man he’s based on.”

He adds, “Crosshair is the first person to express displeasure with regular clones. He goes out of his way to start fights he can’t finish. Optically, this looks like a white man picking on brown men specifically because he believes he is genetically superior to them. It’s fully racist.”

Crosshair’s first comments are in response to a reg asking, “What are you looking at?”  He does not go out of his way to pick fights. However, he does respond callously, “We don’t usually work with regs.” He then flicks his toothpick at the other clone trooper.

The other instance is him questioning Captain Rex’s tactical acumen and if he was so good, Commander Cody would not have had to bring in The Bad Batch. Not sure about you, but that’s not picking a fight. 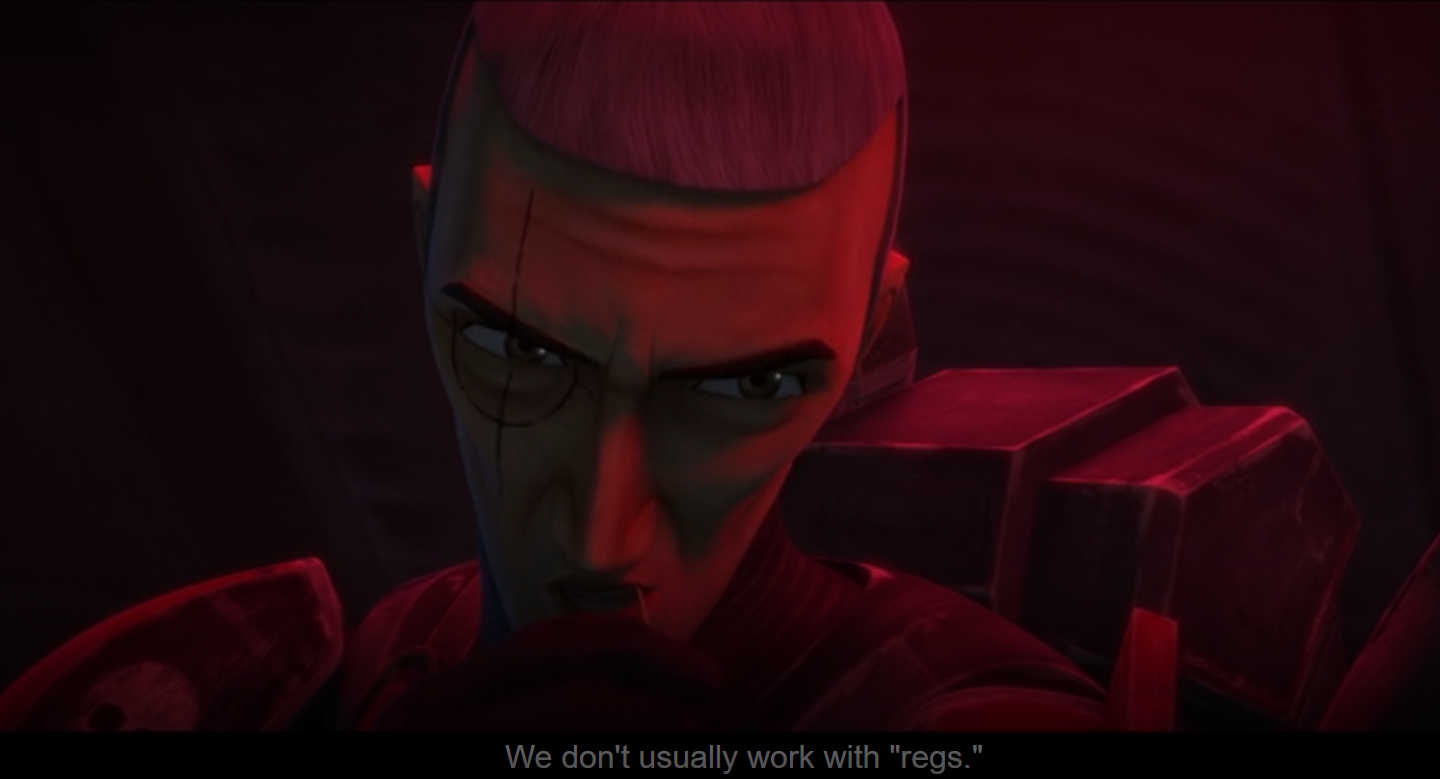 For Tech he writes, “He is designed like a fully white man. White skin, white features, brown straight hair and an unfortunate hairline make up the cognitive genius of The Bad Batch.”

He adds, “Tech is unsurprisingly also the least likely to fight. He’s very docile, calm, and physically smaller than all of his teammates. Contrast this with Wrecker, who’s the complete opposite in every way. In fact, Tech and Wrecker’s interactions in the first episode compound the racism in both their writing: Tech mocks or belittles what Wrecker says, and directly states that the team would not pass a mental test because of Wrecker.”

As you can below, he’s not small. He’s the same height as both Hunter and Commander Cody. And if you actually watched any of the episodes featuring the Bad Batch, he’s just as likely to take the fight to the enemy as the rest of them.

However, he does try and intervene when Wrecker and Crosshair clash with the regs after Commander Cody is injured.

And then for Wrecker he says, “Wrecker is exactly what his name implies. He’s big, destructive, aggressive, prone to physical violence at the slightest provocation, and he’s the only member of Bad Batch that has features remotely resembling a Māori man’s. He also inexplicably has an American accent (which has change to fake-Māori since the premier of the series).”

He continues, “The team created a directly racist character by making a brown man a large and violent person. His low intelligence and large physical size (especially as contrasted with Tech) is a racist stereotype of literally all men of color.”

“In the first episode, Wrecker complains loudly about hand signs, and it is made clear he’s refused repeatedly to learn them. Tech says that they’d never pass a mental evaluation, directly implying that Wrecker is too stupid and would drag the entire team down. I don’t have a lot to say other than that this is fully racist,” he then adds.

I’m pretty sure all of the clones are aggressive and prone to violence. They were literally created to fight a war.

And last, but not least, Clonehub talks about Omega, “Omega has incredibly light skin and blonde hair, although the team didn’t go the standard route and give her blue eyes (like they have done with some clones).”

He adds, “Surprisingly enough, she actually has a proper Māori accent, which I consider an improvement over what the rest of The Bad Batch has. At the same time, this does not erase the fact that she has been designed after a white girl, and that she isn’t even the first clone child to be given lightened skin and hair.”

It is clear that all of the clones of The Bad Batch are quite different than their regular clones. But that’s explained in their first appearance. Cody specifically describes them as defective.

But anyone who’s watched any of The Clone Wars and Star Wars Rebels knows that The Bad Batch, while they are technically defective, they are not unique when it comes to clones having individual personalities and traits.

Some favorites are Rex and Cody seen in “The Bad Batch” episode, but others include Fives, Echo, Wolffe, and Gregor.

There are valid complaints about The Bad Batch, the idea that they are racist is not one.