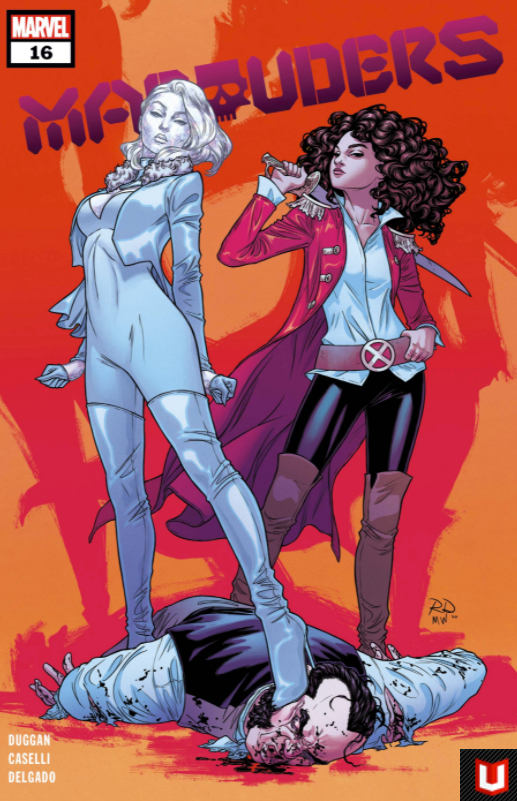 Duggan took to Twitter, where he wrote, “The folks collaborating on X comics are cooking up the biggest stories in comics right now.”

He then detailed, “The goal is to have fun, thrill our artists and editors, and give readers what they didn’t know they needed.”

“The goal is to make the artist happy. Everyone else is along for the ride,” he added. 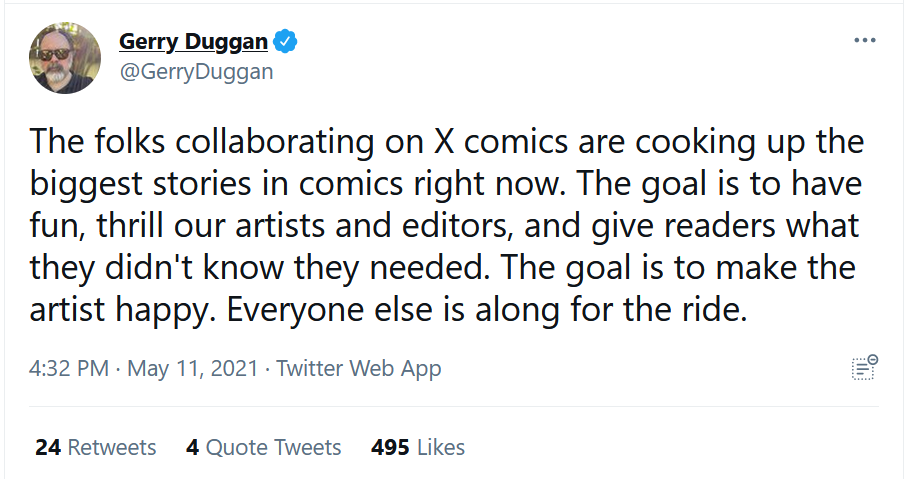 In a subsequent tweet, Duggan stated, “Please do not give us your great story ideas. They are for you to exploit.”

He continued, “Please do not behave in an unhinged manner about the comic books to the folks working hard on them. Be cool.”

“The Reign Of X is here, hope you dig it, but we sure as hell are having fun,” he concluded. 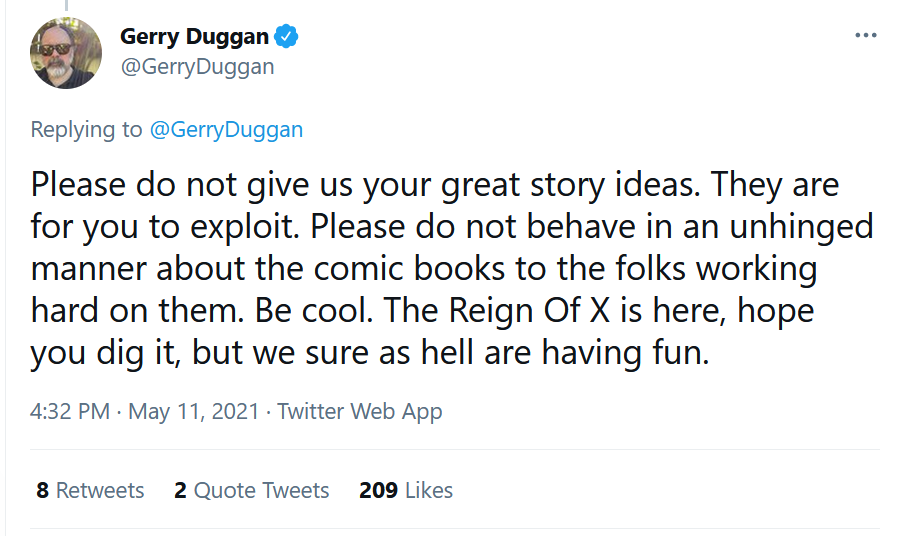 The user added, “No wonder why the comic industry is failing and Manga is destroying American comics. It’s supposed to be about keeping the fans/customer happy.” 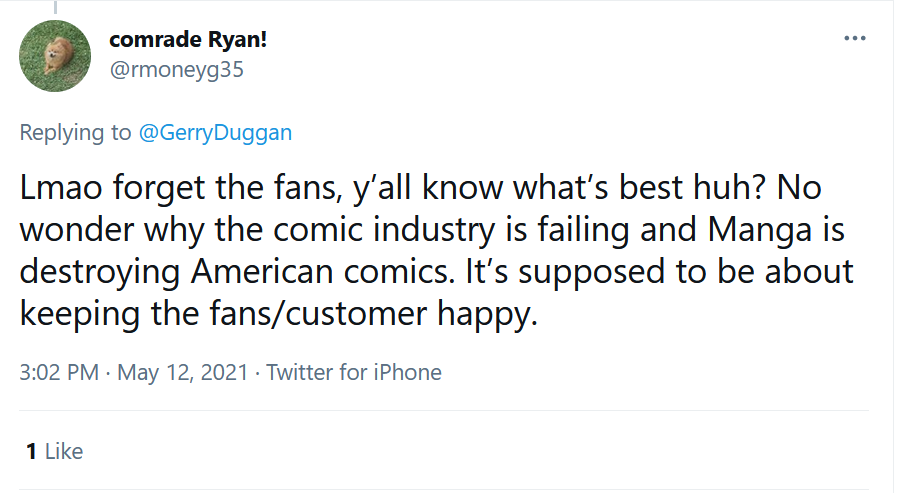 Duggan responded by sharing a YouTube video from Marvel Entertainment with a message from Stan Lee. 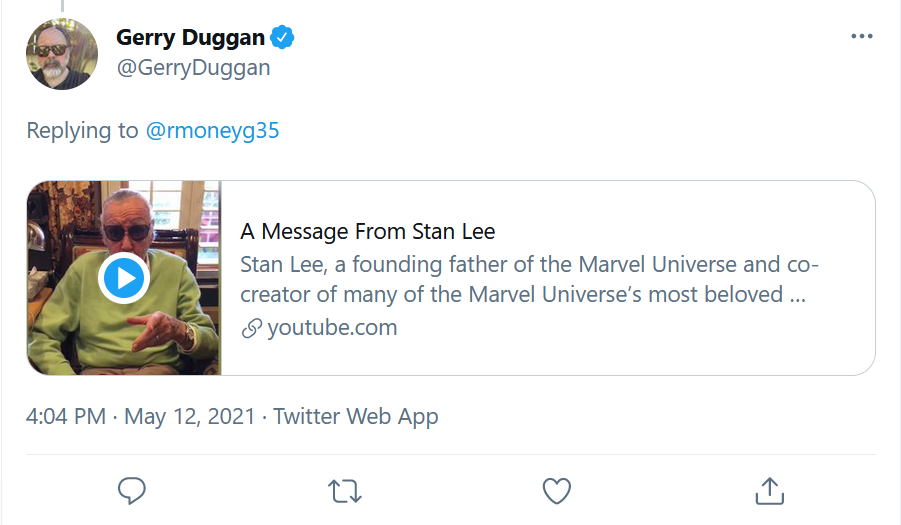 In the video Lee states, “I want you to know, Marvel has always been and always will be a reflection of the world right outside our window. That world may change and evolve, but the one thing that will never change is the way we tell our stories of heroism.”

He continued, “Those stories have room for everyone regardless of their race, gender, religion, or color of their skin. The only thing we don’t have room for are hatred, intolerance, and bigotry.”

“That man next to you, he’s your brother. That woman over there, she’s your sister. And that kid walking by, hey, who knows he might have the proportionate strength of a spider,” said Lee.

Lee concluded, “We are one big family, the human family, and we all come together in the body of Marvel. And you, you are part of that family. You are part of the Marvel Universe that moves ever upward and onward to greater glory. In other words, Excelsior!”

The one from September 1967 reads, “Many Keepers of the Faith have demanded that we take a more definite stand on current problems such as Viet Nam, civil rights, and the increase in crime, to name a few. We’ve a hunch that most Marvel madmen pretty well know where we stand on such matters – and we’ve long believed that our first duty is to entertain.”

It continues, “Of course, you’ve probably noticed that it’s not too easy to keep our own convictions out of the soul-stirring sagas we toss at you-but, in our own bumbling fashion, we do try.” 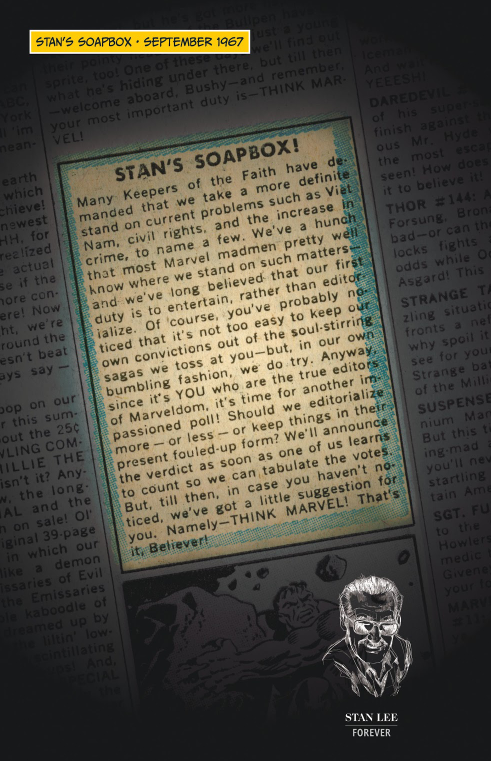 That’s right Stan Lee made it clear that Marvel’s first duty was to entertain.

According to Duggan that is no longer the case anymore. The goal is now to “give readers what they didn’t know they needed.” That doesn’t sound like entertainment.

And as rmoneyg35 points out, readers are finding entertainment elsewhere and it looks like a lot of them are finding it manga.

Twitter user Vielned points out that the latest NPD BookScan results for April 2021 show manga dominating sales with the top 20 slots. There are no western comics on the list whatsoever. 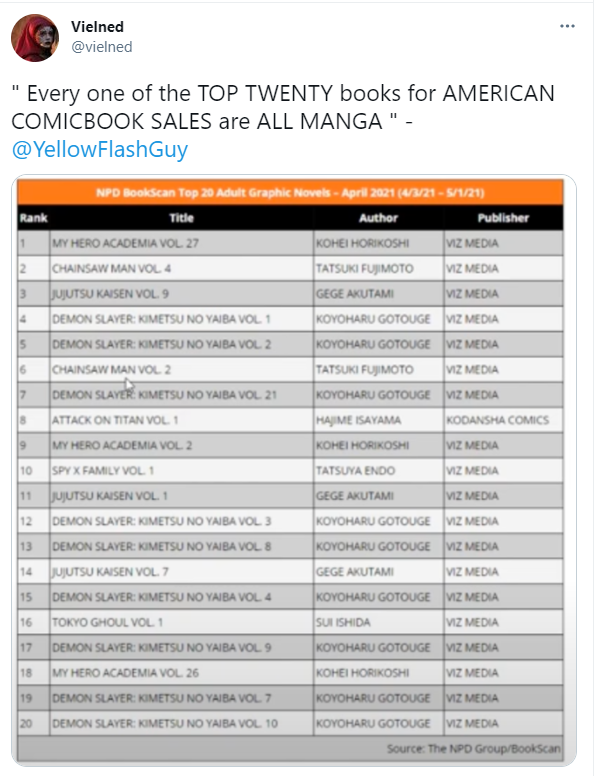 It appears that readers aren’t along for the ride.

They hopped off the Marvel bus, and it doesn’t look like they are getting back on anytime soon.