Transformers: King Grimlock is written by Steve Orlando with artwork by Agustin Padilla, and colors by Jeremy Colwell.

It will be a five-issue miniseries that takes place in “world of fantastical beasts and magical powers.” 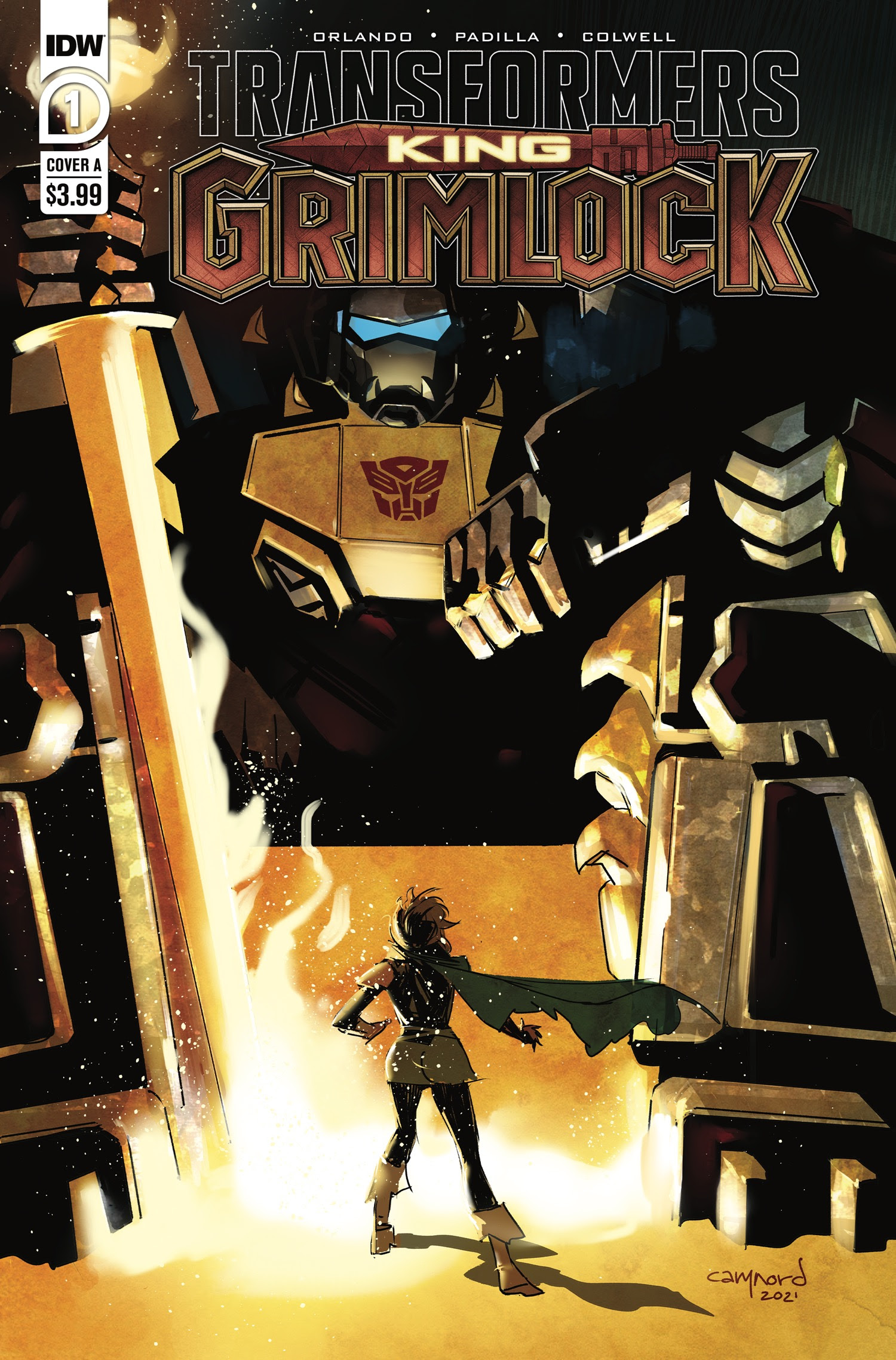 In a press release, IDW details, “In a savage world where the strong rule with sword and iron, the Dinobot Grimlock finds a new opportunity to prove he’s the strongest there is… but as Grimlock and the human barbarian Arko will learn, sometimes brute strength isn’t enough.”

Orlando provided more insight stating, “King Grimlock is a sky-high dream come to life, a story so big and wild, I wasn’t sure if the Transformers universe could contain it.”

He added, “This is a first-of-its-kind, science/fantasy epic for fans new and old, whether you follow the animation of the ‘80s, the modern shows of the ‘00s, the big screen blockbusters, the decades of incredible comics, or if you’ve been intrigued by Grimlock action figures on the shelf. Everyone’s welcome!” 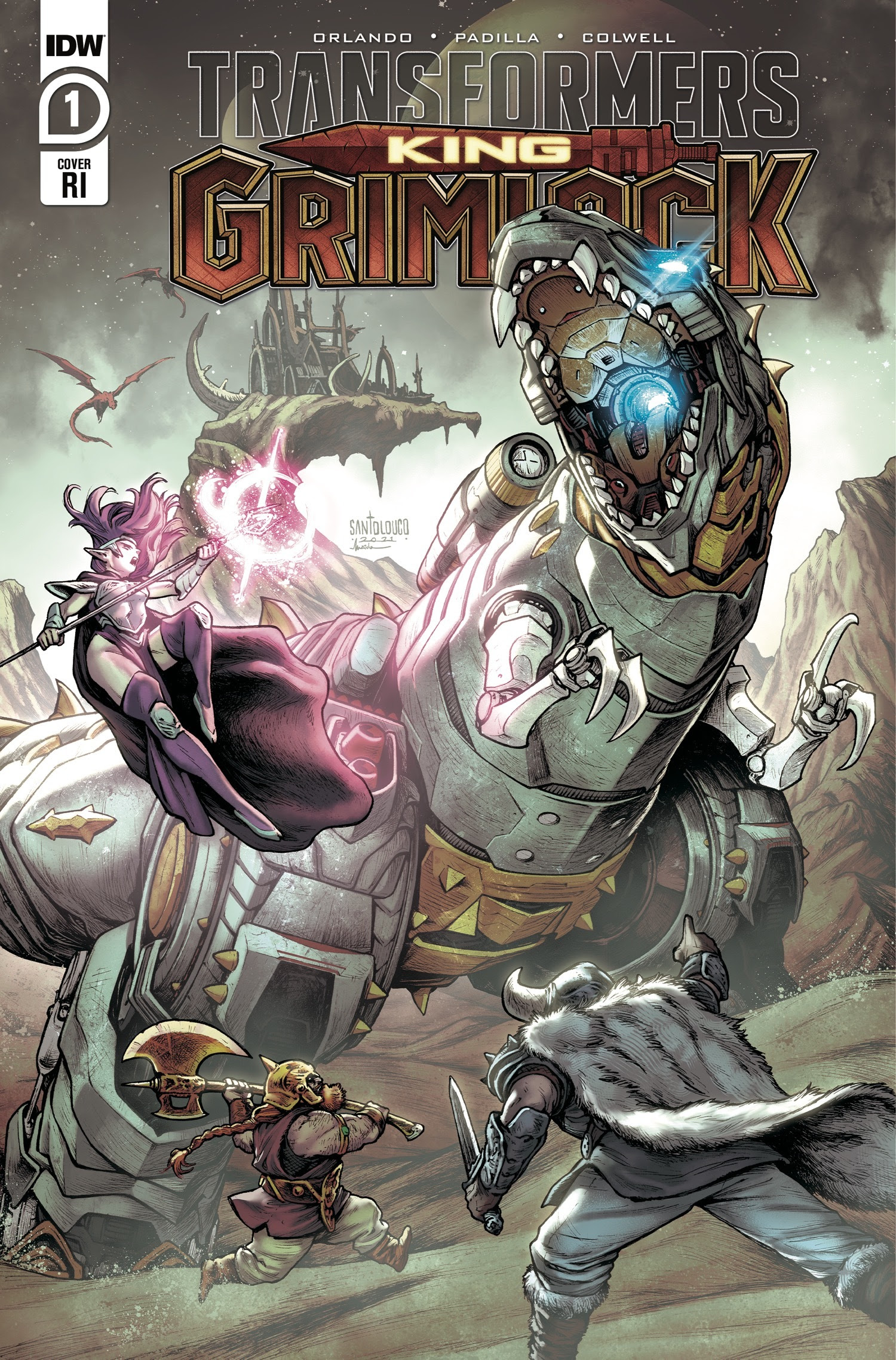 Padilla also stated, “Right from the start, I knew that King Grimlock had all the ingredients to be an incredible project, and I’m really proud and excited to bring it to life with this great team.”

Editor David Mariotte also detailed, “By spotlighting a beloved character like Grimlock in an epic barbarian fantasy, Steve, Agustin, and Jeremy are crafting an iconic story that expands the understanding of who Grimlock is and what a Transformers story can be.”

He added, ““Plus, a two-story tall robotic T-rex battles dragons, magicians, and monsters, which is awesome.”

The series will arrive sometime in August.

Transformers: Shattered Glass is written by Danny Lore with art by Guido Guidi and Dan Khanna and colored by John-Paul Bove.

IDW’s official description for the series begins, “In a parallel universe, a war raged across the cosmos from Cybertron to Earth… a war between Decepticon laborers-turned-freedom fighters and the power-hungry Autobot autocrats.”

It concludes, “Many kilocycles after the blue planet was devastated and the Decepticons were brought to heel, the evil Autobot bodyscrapper named Blurr hunts a new bounty… one who holds a piece of information that could reignite the war!” 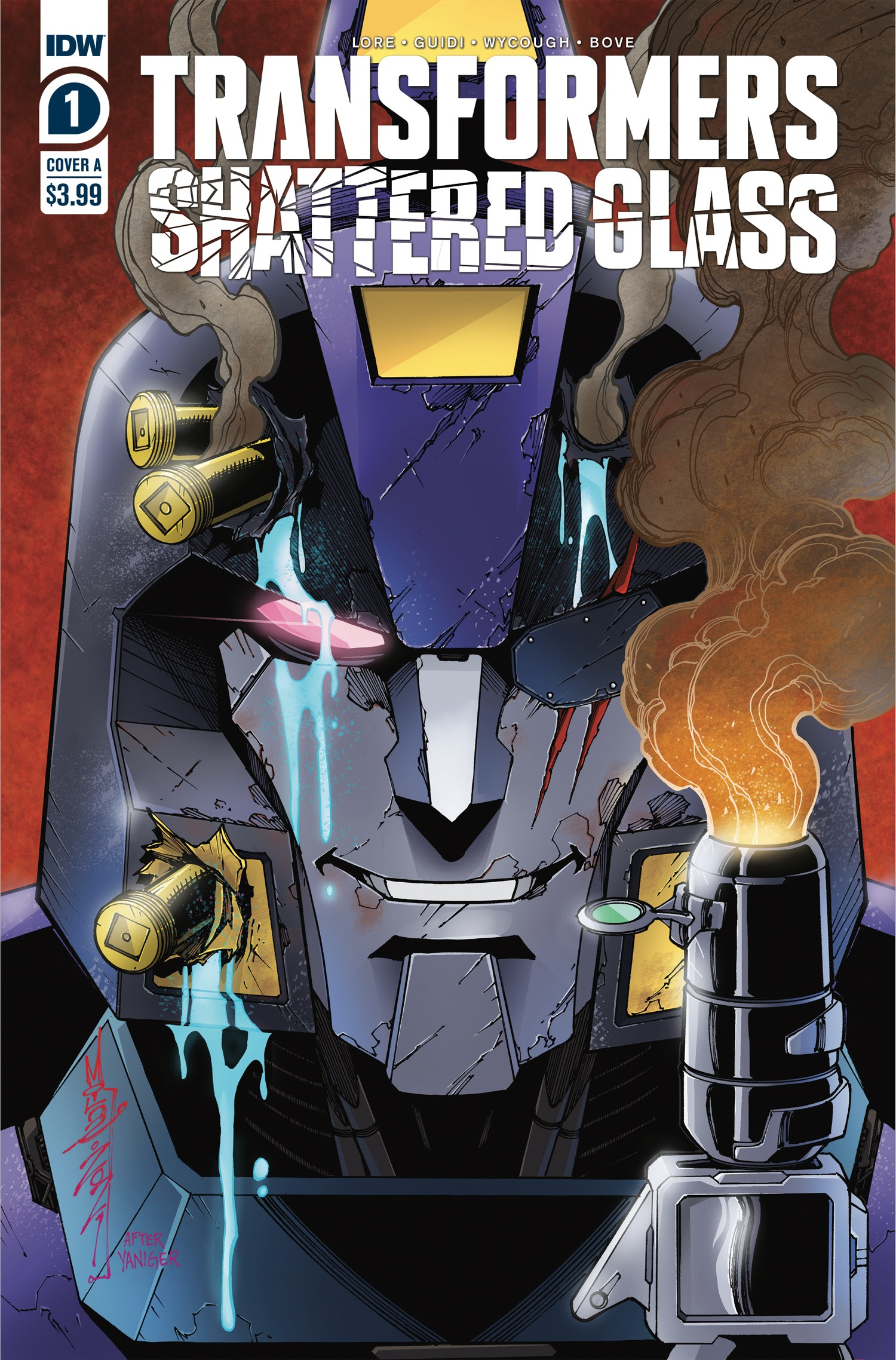 Lore provided more details saying, “To this day, I’m the nerd whose heart swells when they hear Optimus Prime and Starscream’s voices.”

He added, “As a writer, I love exploring characterization, what the core elements are that make someone who and what they are. Creating these Shattered Glass versions of childhood favorites is like building the perfect Combiner for me: what are the nuts and bolts that we can swap out while still making them recognizable.”

Guidi provided a statement as well, “It’s absolutely a blast to be part of the Shattered Glass team! The best part as an artist is to convey the new twisted personalities in familiar faces, and Danny’s script allows a lot of fun with that aspect. It’s great to discover how a classic good guy can work well as an evil character, and vice-versa!”

Khanna also stated, “It’s a thrill to be able to draw a completely fresh take on the classic cast with IDW’s all-new Shattered Glass universe and timeline! It’s a lot of fun to realize an evil Optimus Prime and noble version of Megatron.”

Assistant Editor Riley Farmer said, “Our wonderful partners at Hasbro made a huge splash with their recent announcement of new Megatron and Blurr action figures packaged with our Shattered Glass comics, and we’re proud to bring that story content — and specifically three cover variants exclusively available to the comics retail channels — to the wide audience of monthly comics readers”

The series will feature three cover variants for the first issue by Alex Milne, Dan Khanna, and a Retailer Incentive Edition by Sara Pitre-Durocher. It will also arrive in August. 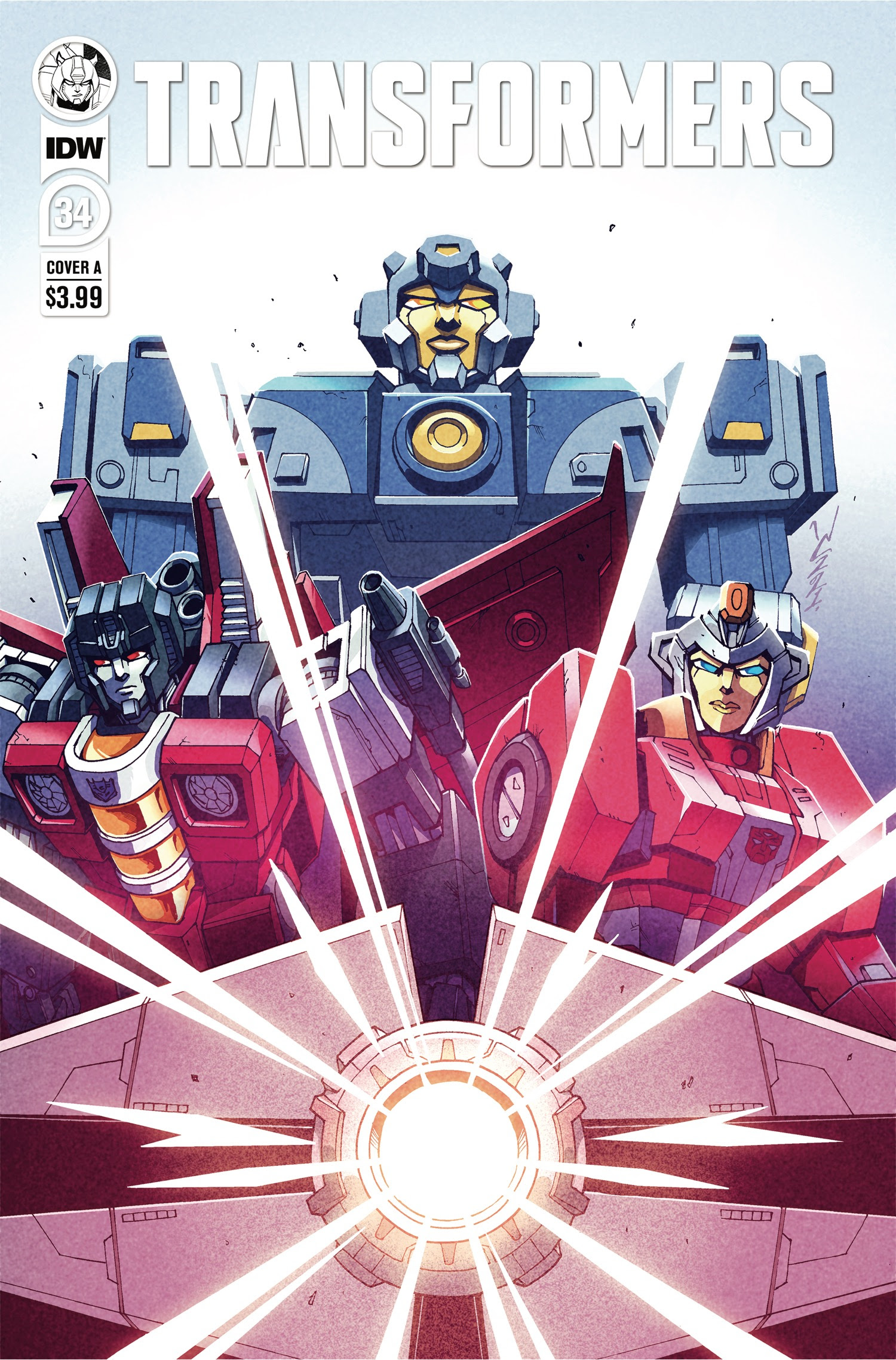 The main Transformers series will also feature a new storyline called “Sea of Rust” from writer Brian Ruckly and artist Anna Malkova that begins in Transformers #34 in August.

The official description states, “Megatron has learned that his former mentor, Termagax, holds a key artifact that could tip the scales of the war firmly in the Decepticons’ favor, eliminating the Autobots once and for all. The first order of business, however, is running Termagax down!” 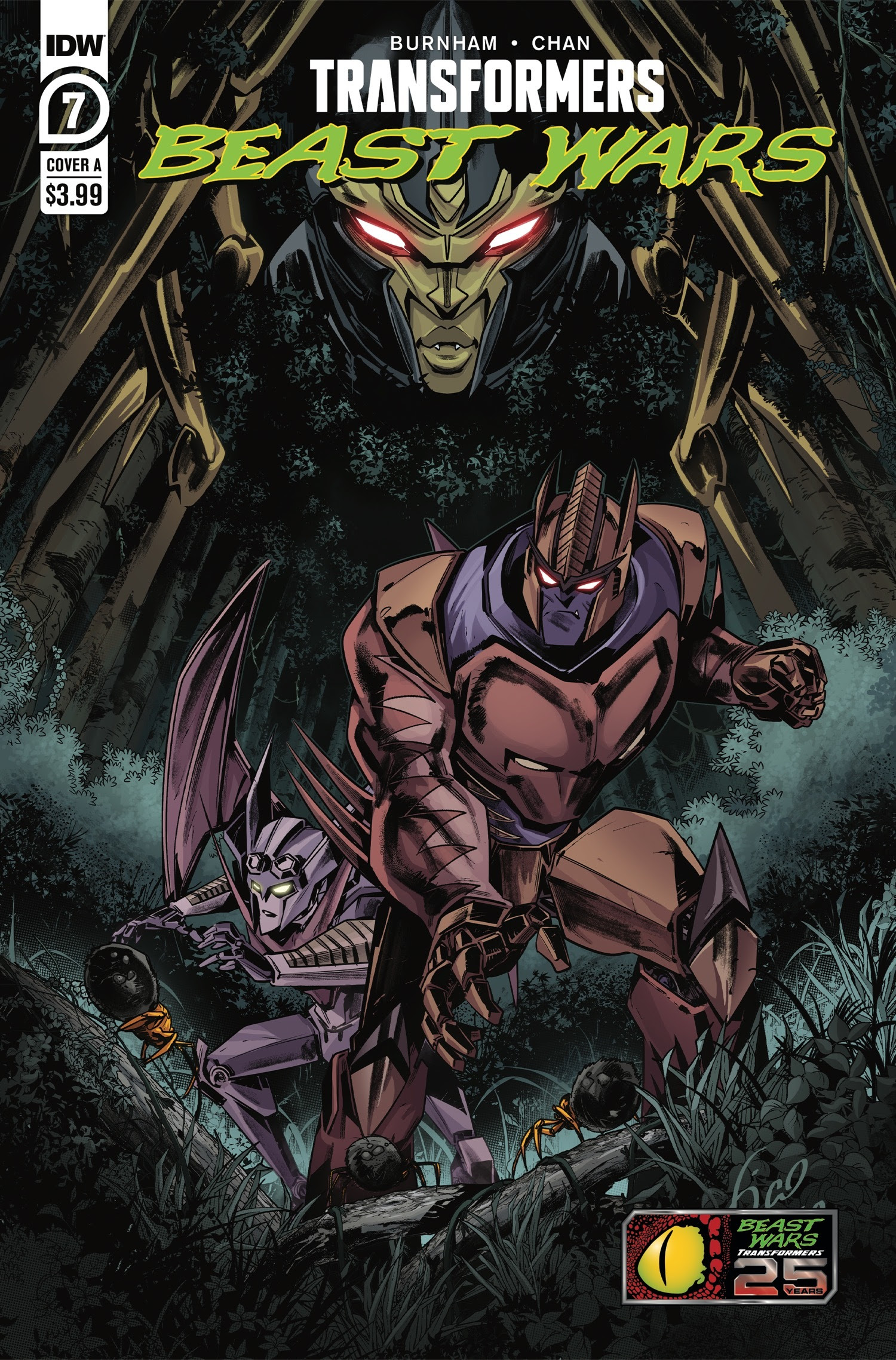 The official description reads, “Regrouping after their first explosive battle, the Maximals and Predacons are alerted to the descent of a new protoform pod… and its sole inhabitant, Blackarachnia! Whose side will this mysterious newcomer take?”