The U.S. Supreme Court decided to not take up a copyright lawsuit involving a Dr. Seuss and Star Trek mash-up comic book.

The original lawsuit was filed by Dr. Seuss Enterprises back in 2016 over a planned book from ComicMix titled “Oh, the Places You’ll Boldly Go!” that would mash-up Star Trek and Dr. Seuss.

“The Infringing Work misappropriates key protected elements of Oh, The Places You’ll Go!, including without limitation its title, story arc, characters, and illustrations. The Infringing Work also misappropriates key protected elements of Horton Hears a Who, How the Grinch Stole Christmas!, The Lorax, and The Sneetches and Other Stories, including without limitation characters and illustrations therefrom,” they added.

U.S. District Judge Janis L. Sammartino would rule in favor of the Defendants back in 2019.

In the complaint about copyright infringement and fair use she wrote, “Here, the Court has concluded that Boldly is highly transformative. As such, Boldly serves to further ‘the goal of copyright, to promote science and the arts.'”

Sammartino continued, “Despite Boldly’s commercial nature, the first factor of the fair use analysis therefore weighs in favor of Defendants. Of course, Plaintiff’s copyrighted works are also highly creative, although they have also long been in publication, resulting in the second factor slightly favoring Plaintiff.”

She added, “Although Defendants borrowed heavily from Go! and the other Copyrighted Works, the Court ultimately concludes that Defendants took no more than was necessary for their purposes; consequently, this factor does not weigh against Defendants.”

She concluded, “Finally, the Court concludes that the harm to Plaintiff’s market remains speculative and, accordingly, that the fourth factor is neutral. On balance, therefore, the fair use factors favor Defendants. Accordingly, the Court GRANTS Defendants’ Motion for Summary Judgment as to fair use.”

Sammartino would also find in favor of the Defendants on the trademark infringement claim concerning artistic style and typeface.

Dr. Seuss Enterprises would appeal to the Ninth Circuit Court where they would affirm Sammartino’s ruling regarding the trademarks, but would reverse the decision in regards to the complaint about copyright fair use in December 2020.

Judge M. Margaret McKeown ruled, “Although ComicMix’s work need not boldly go where no one has gone before, its repackaging, copying, and lack of critique of Seuss, coupled with its commercial use of Go!, do not result in a transformative use.”

She also added, “The bottom line is that ComicMix created, without seeking permission or a license, a non-transformative commercial work that targets and usurps Go!’s potential market. ComicMix did not carry its burden on the fourth factor. Based on our weighing of the statutory factors ‘in light of the purposes of copyright,’ we conclude that ComicMix cannot sustain a fair use defense. 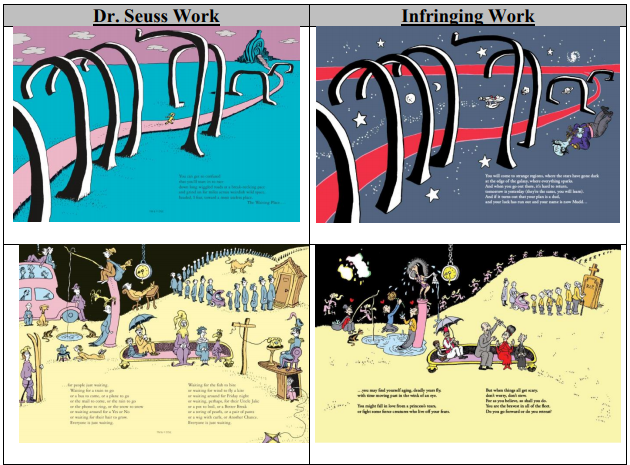 ComicMix filed a petition for a writ of certitorari on May 17th to the United States Supreme Court. The Supreme Court denied the petition on June 21st.

What do you make of the Supreme Court taking up the case? Do you think the Ninth Circuit got the ruling correct?