A horror comedy film based on the 2016 Red Storm Entertainment developed, Ubisoft published multiplayer VR video game of the same name, Werewolves Within keeps the same mystery/whodunit element of the game by introducing audiences to a small town under attack from a werewolf and leaving them to wonder which of the townsfolk could be the actual lycanthrope.

Directed by Josh Ruben and written by Mishna Wolff, Werewolves Within begins as Ranger Finn Wheeler (Sam Richardson) arrives in Beaverfield for his new post. Finn hits it off with the local mail carrier Cecily (Milana Vayntrub), but the rest of the town is unusually eccentric, to say the least.

There’s Trisha (Micahela Watkins) and Pete (Michael Chernus) Aderton, a couple who makes weird miniature dolls of everyone they meet and care a little too much for their dog. Devon (Cheyenne Jackson) and Joaquim (Harvey Guillén) are a homosexual couple living off the riches of a successful technological company. The town’s resident mechanic is Gwen (Sarah Burns), a crude woman whose husband Marcus (George Basil) is largely regarded as the town idiot.

Elsewhere in town, rounding out Beaverfield’s colorful cast of characters, is the clingy owner of the local lodge, Jeanine (Catherine Curtin), canine attack expert Dr. Ellis (Rebecca Henderson), oil magnate Sam (Wayne Duvall) who hopes to install a pipeline through the town at any cost, and Emerson, a ‘scary’ hunter who hates people and lives on the outskirts of town. 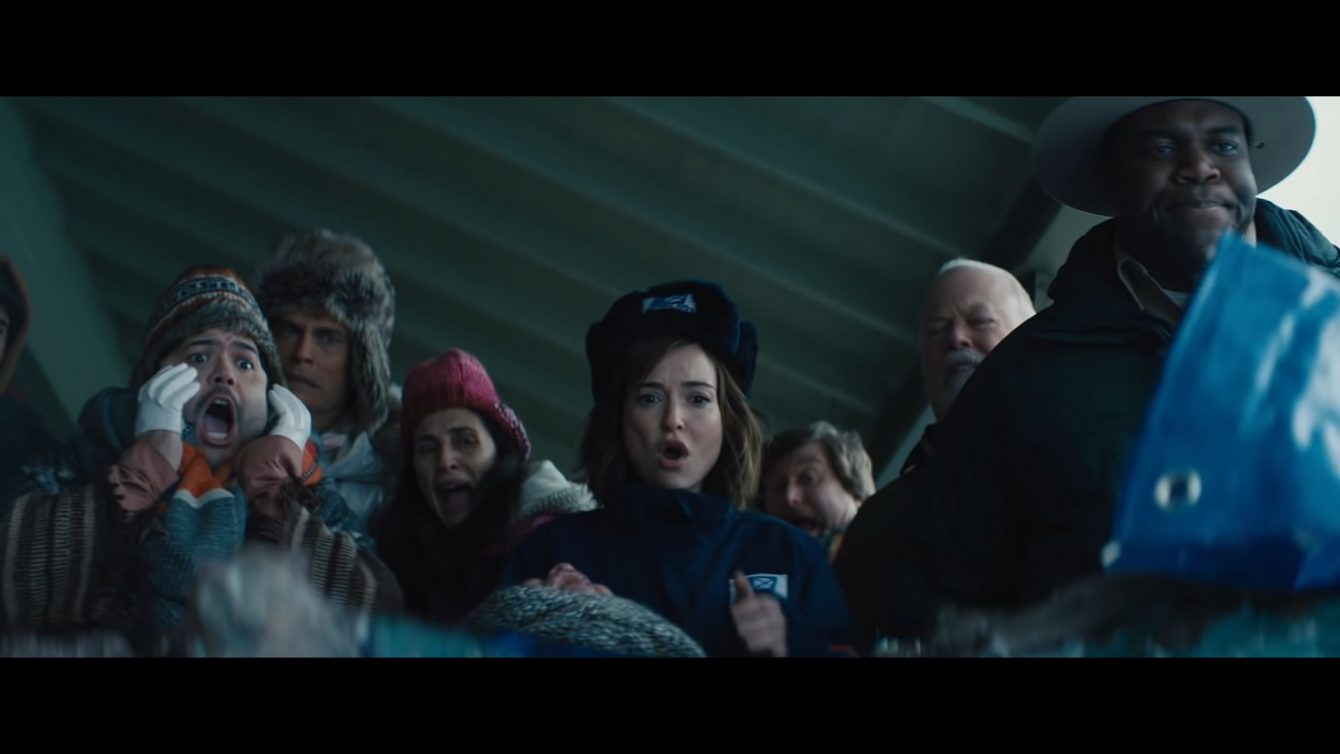 One night, when the power suddenly goes out and with the town’s back-up generators in a state of disrepair, everyone in town takes refuge in Jeanine’s lodge. However, after a corpse is discovered underneath the lodge’s porch and the townsfolk barricade themselves inside the building in an attempt to protect themselves from whatever may be lurking outside, the werewolf manages to attack from within.

In the aftermath of the attack, everyone begins to turn on each other, as the monster’s strike from inside the lodge provides them with a shocking revelation: Somebody in the lodge is the werewolf. 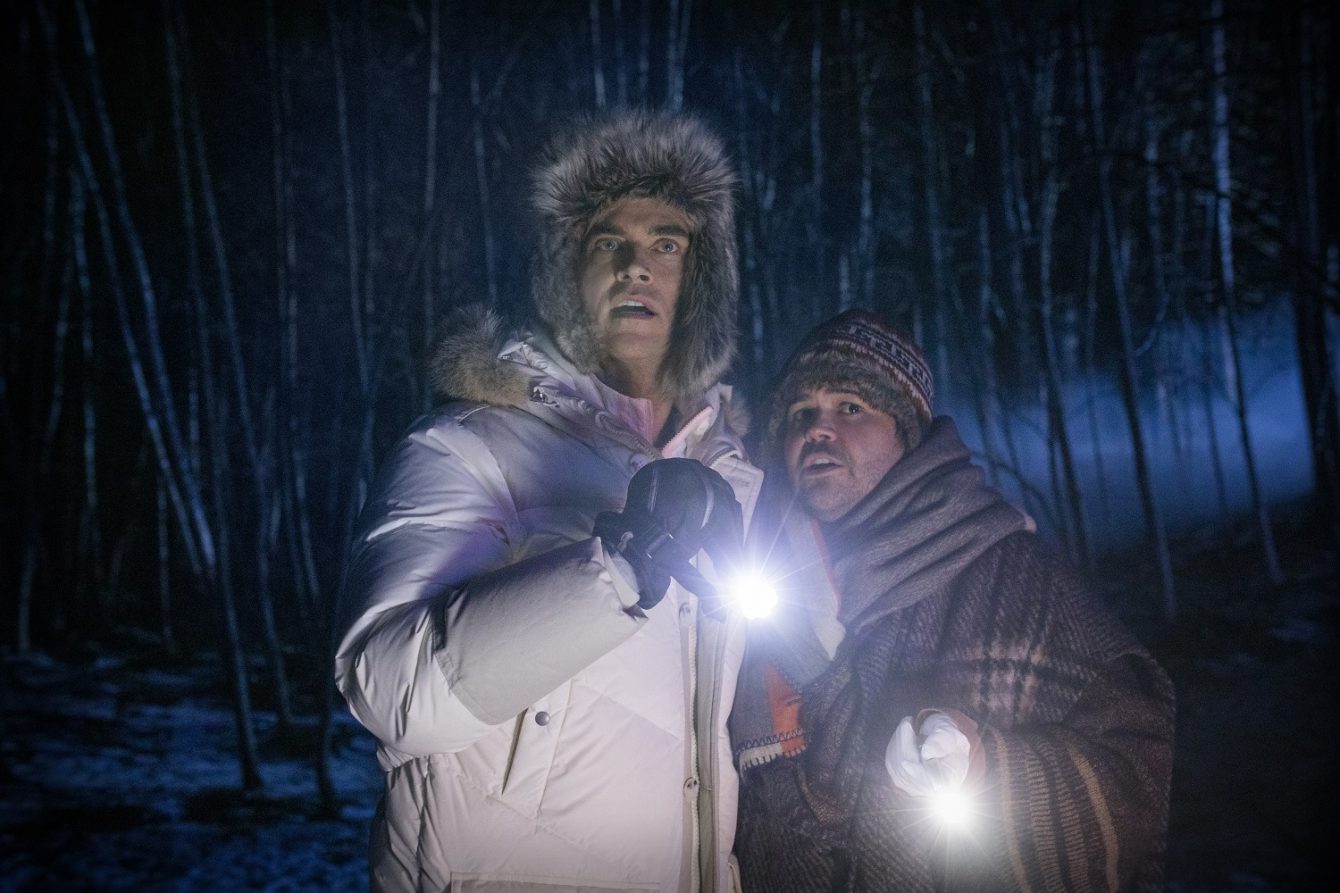 The cast works so well together. Richardson is does an excellent job of portraying Finn, a guy so nice and soft spoken that he feels like an African American Ned Flanders attempting to take charge as the authority figure.

Similarly, Vayntrub is so charming as Cecily that it makes you wonder why she hasn’t been in much else outside of AT&T commercials and the occasional voice role as Marvel’s Squirrel Girl, while Guillén is just as funny here as he is on What We Do in the Shadows, albeit in a slightly different way.

However, the most entertaining aspect of the film’s casting is the way everyone’s eccentric chemistry bounces off each other in a way that evokes this palpable sense of quirky absurdity that you can’t really find anywhere else. 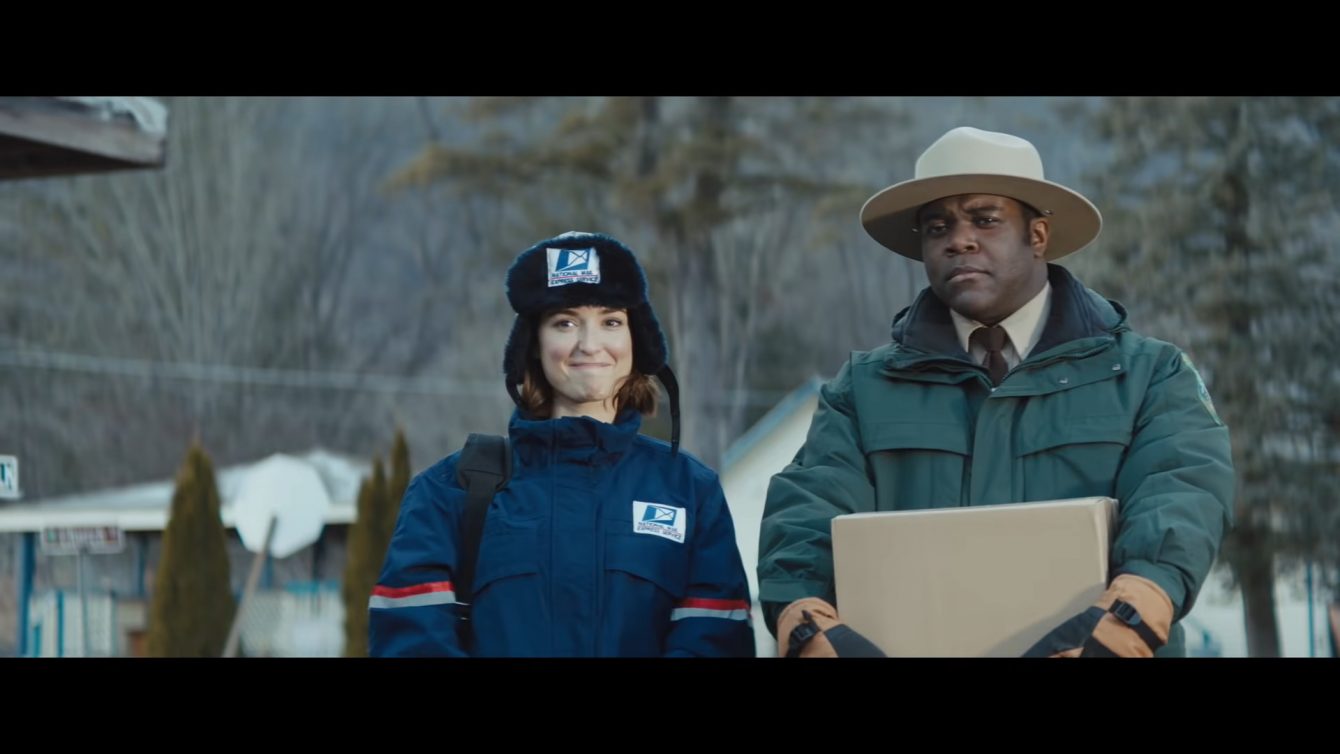 The formula of Werewolves Within is a lot like Knives Out or Murder on the Orient Express, as it’s a mystery wrapped within the confines of a horror comedy, with the ensemble cast taking center stage as they dance around the comedy genre and a mild R-rating while the horror aspect is mostly reduced to sitting in the backseat and tapping you on the shoulder from time to time.

In fact, to that same mysterious end, the eponymous werewolf isn’t actually revealed until the last ten or so minutes of the film. 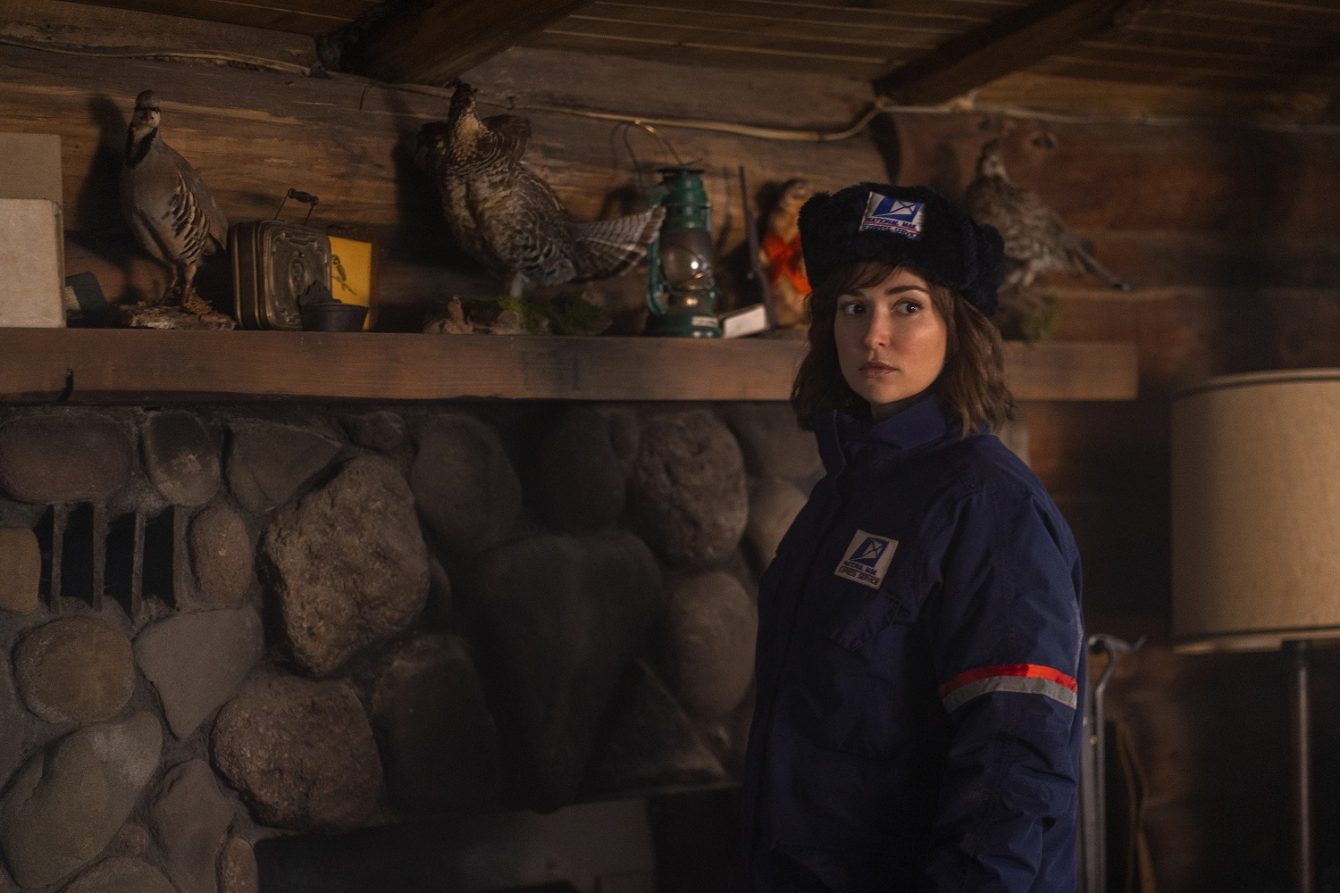 As someone who hasn’t played the original video game, the film adaptation of Werewolves Within was, overall, a little disappointing from a personal standpoint.

Yes, the film is more of a whodunit than a straight horror film, and thus it’s understandable why it did not lean completely into the more gory and terrifying potential of its premise. Yet, even with this fact in mind, the film still feels particularly lacking when it comes to its actual horror elements.

It’s also one of the softest R-rated films to come along in quite some time. While some aspects, such as Finn biting his tongue or saying “Heavens to Betsy” instead of dropping an F-bomb make sense, it remains frustrating nonetheless that Werewolves Within constantly feels as if it’s purposely holding itself back.

Which is a shame, because there’s more to a film like this than silly on-screen hijinks and running attempts by the audience to figure out who the killer is – after all, some of us will pay good money to see the monster you’ve advertised your entire film. 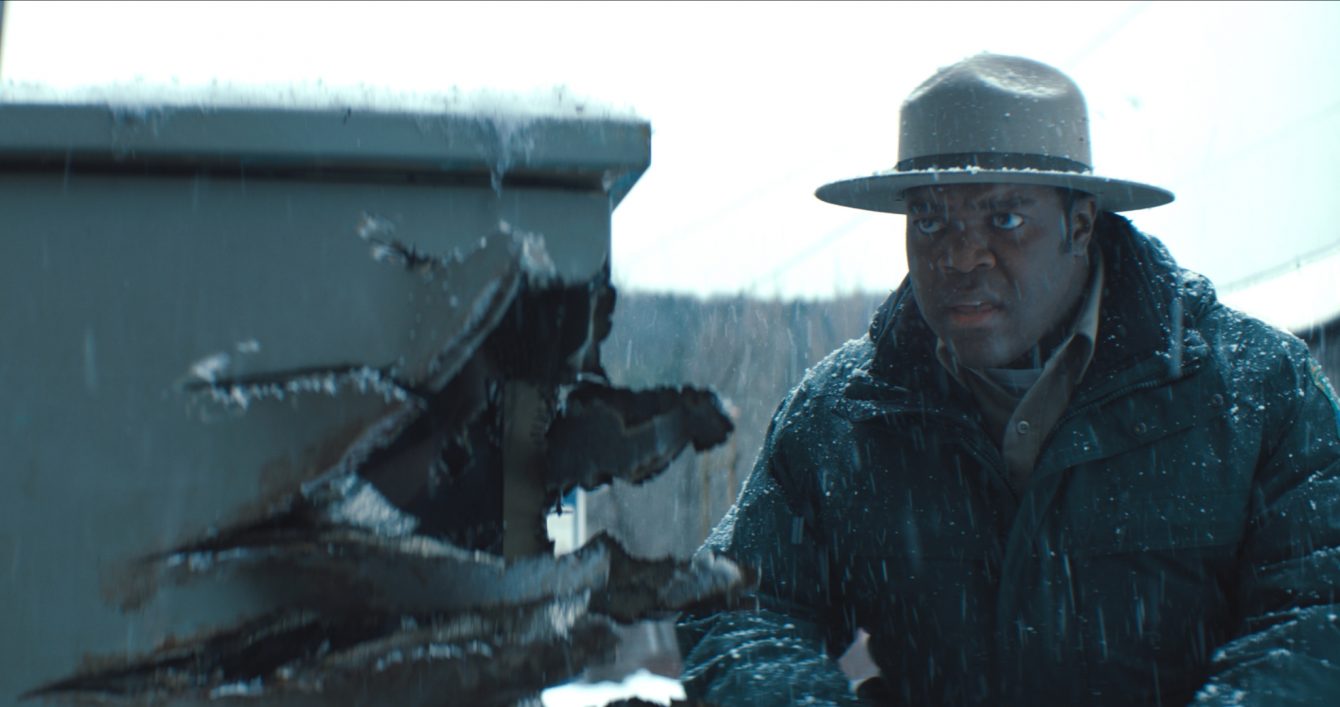 Recently, there seems to be a rising trend among modern werewolf movies to barely feature a film’s respective monster on screen. This year’s Bloodthirsty is a great example and, as much as I love the film, The Wolf of Snow Hollow did the horror/comedy concoction to a much more satisfying degree than Werewolves Within, and yet totally massacred the idea of an actual werewolf being the culprit.

At the end of the day, Werewolves Within is a film where a bunch of weirdos in some-little-nowhere-town are forcibly crammed into a lodge during a snowstorm and proceed to irritate one another to semi-humorous results as a werewolf hides among them. The film is essentially a wolf in a person’s clothing, as while Werewolves Within is fine for what it is and features some great performances here and a couple laugh-out-loud moments, its potential seems to be far greater than what we received. 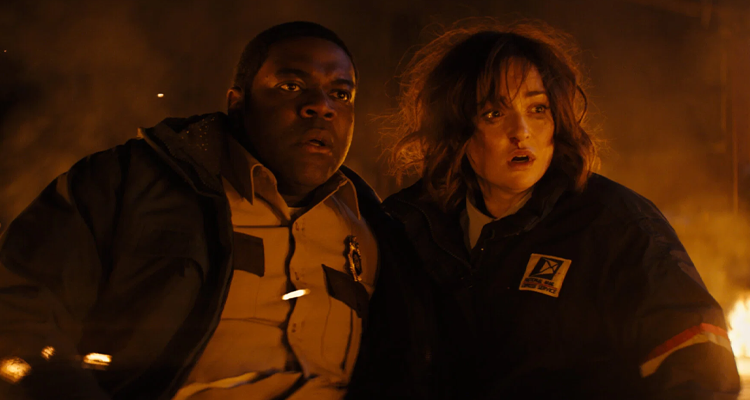 Werewolves Within is now playing in select theaters and is also available on VOD for a rental price of $6.99.