Amazon’s The Lord of the Rings writer and former Breaking Bad writer Gennifer Hutchison recently took to Twitter to perform an impromptu Q&A session where she made clear she believes narrative structure is necessary for an effective episode of television.

Not only did she reveal narrative structure is necessary for an effective episode of television, but she would also address the importance of staying true to characters, what makes a “kicka** female protagonist, and how one should go about rebooting franchises among others. 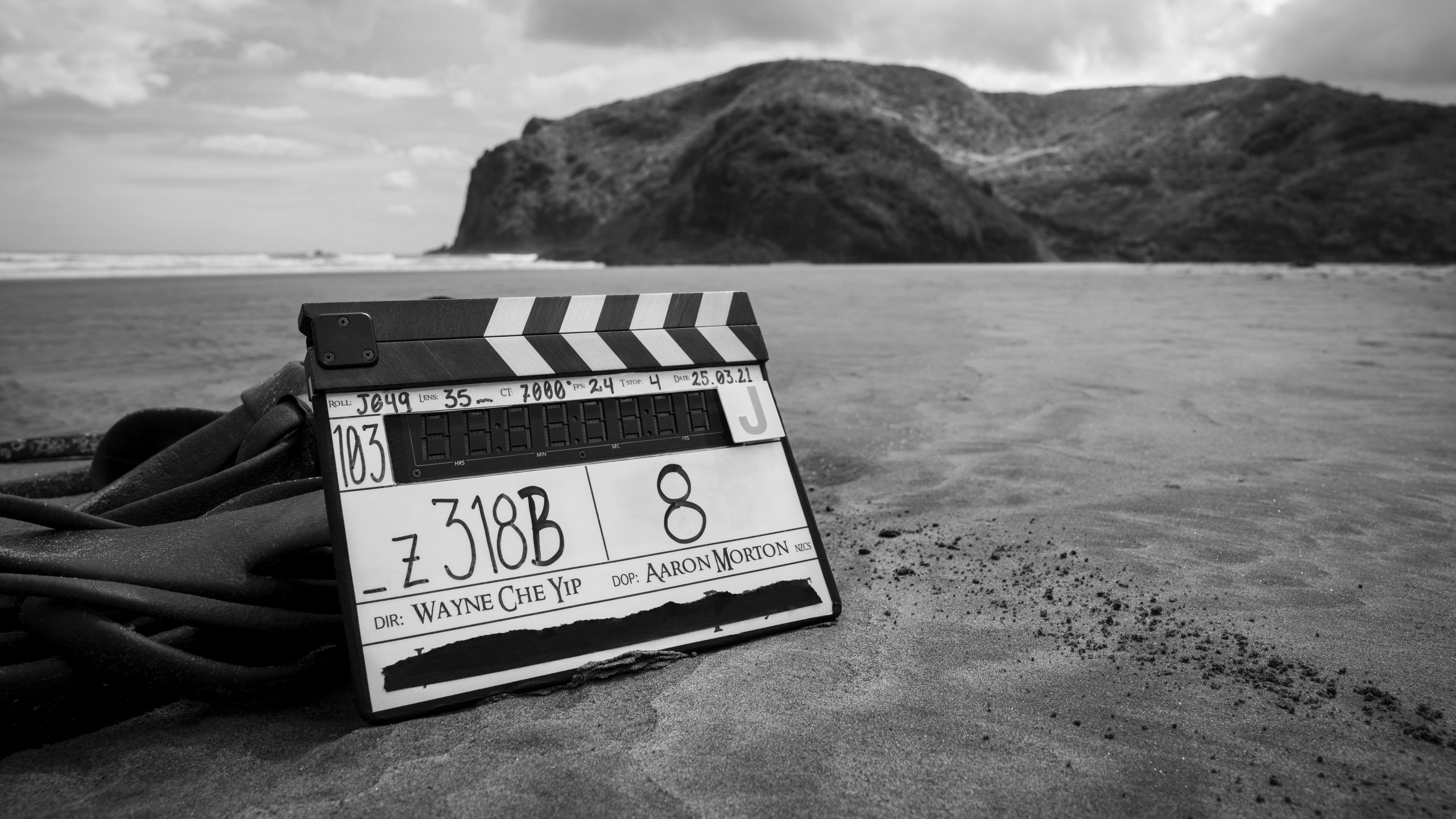 Hutchinson first announced the Q&A on Twitter writing, “Hi. How about a Q&A? I’d like to narrow the focus tho. I’ll answer questions about tv/sreenwriting CRAFT for the next 20 minutes. Got burning writing technique and storytelling questions? Go for it.”

She added, “As always, I can speak only to my experience. Take what works. Leave the rest.”

Twitter user TheZeusJuice asked, “When writing a Pilot, is it more important that is adheres to a specific structure (4 acts, 5, etc) or just show you can tell a story and have solid characters?”

Hutchison responded, “I think you can have it all, but yes, a solid story and characters is more important BUT structure is part of a solid story. even in streaming/hbo style shows with no act breaks, your episode has to have narrative structure of some kind to be most effective.” 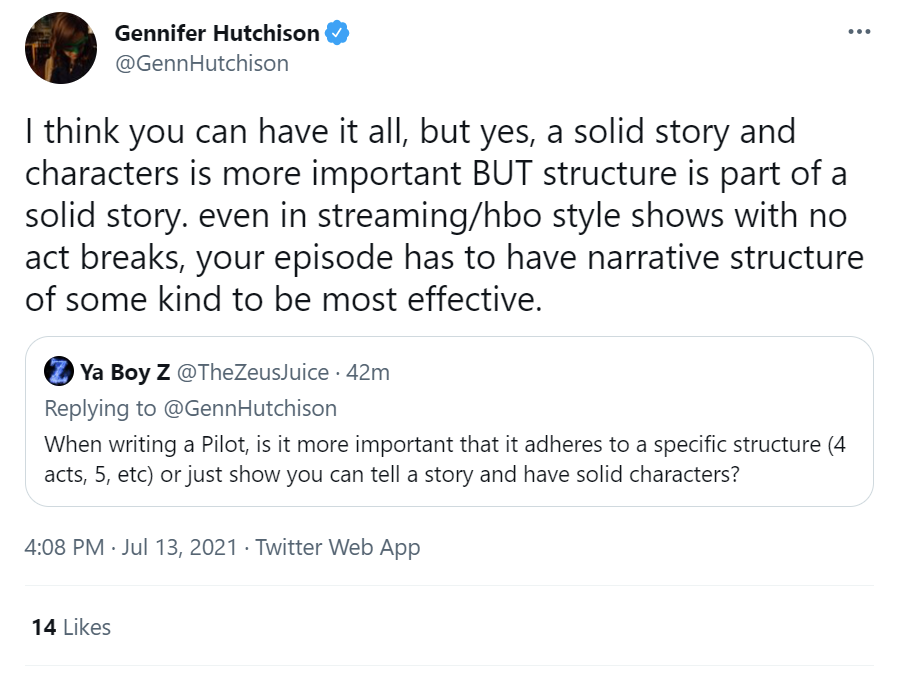 Another Twitter user, KellywhoLA, asked, “Struggling with a new pilot. Just in brainstorming phase. Have characters, world, some conflicts but I can’t seem to narrow down the engine of the show… any tips?” 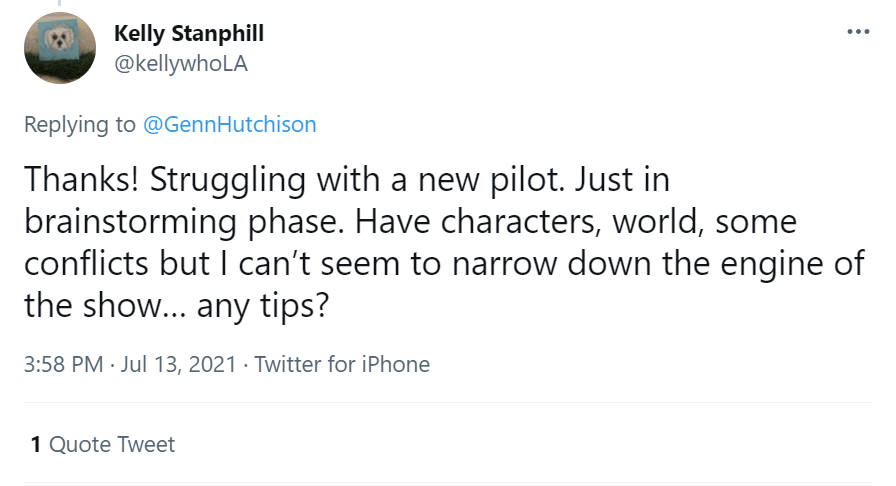 Hutchison responded, “Been there. I try to focus on char’s core conflict and go from there. What are they struggling with? What does the world do to add to that? What paths could they take to deal with their struggle and how does the world complicate it?”

She added, “Then given that context, flesh out incident.” 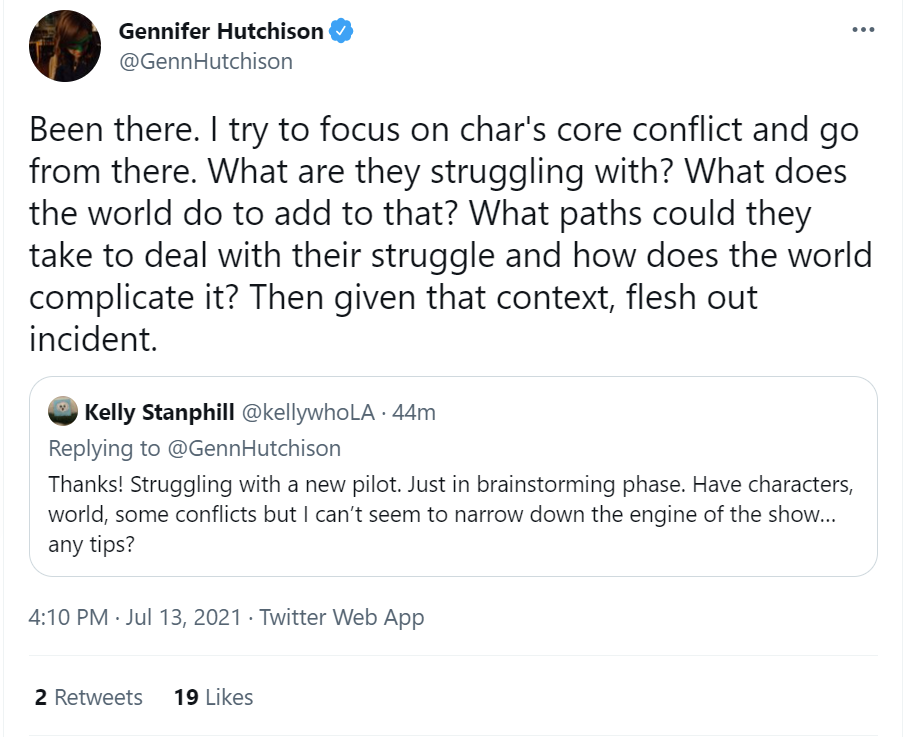 Twitter user Asimplepeasant also asked, “In your experience, what are a couple of important habits to develop during editing and re-writes of your works?”

Hutchison answered, “Consistency. Perspective — not getting too bogged down in the details of each scene that you lose the larger thread of the story.”

She added, “I find it helpful to do passes that focus on a specific goal (plot consistency, voice differentiation, cutting repetitive bits).”

Hutchison would go on to answer a number of other questions as well.

Hutchison replied, “It should be hard to get to that point. And it should be something the character themselves had to do or face to get there.” Twitter user Dionherself asked, “What is the most useful thing you’ve learned along the way that has added your construction of tv bibles/pitch decks?”

Hutchison responded, “I haven’t written a lot of bibles or pitch decks, honestly. But I think the most important thing to me is focusing on what excites me about the show and making sure that comes through.” 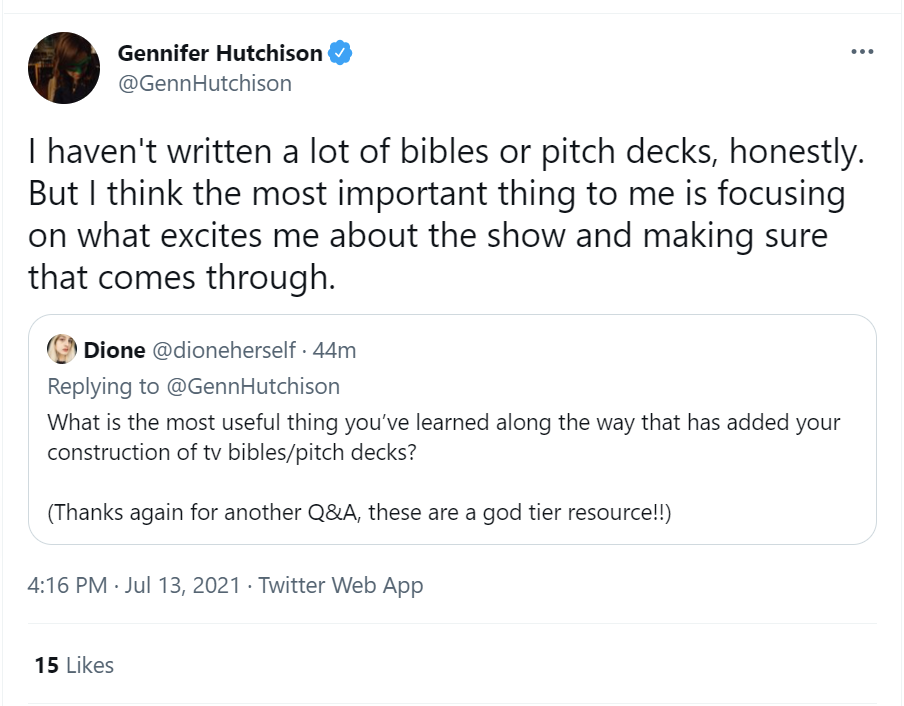 Dogearedlibary asked, “Finding stakes that matter in the beginning, but also have room to grow without feeling ridiculous as the show progresses?”

Hutchison tweeted, “So generally a good rule of thumb for me is that you set the big world stakes thing early, then you build on why they matter personally for your character and how that changes over time in the story.” 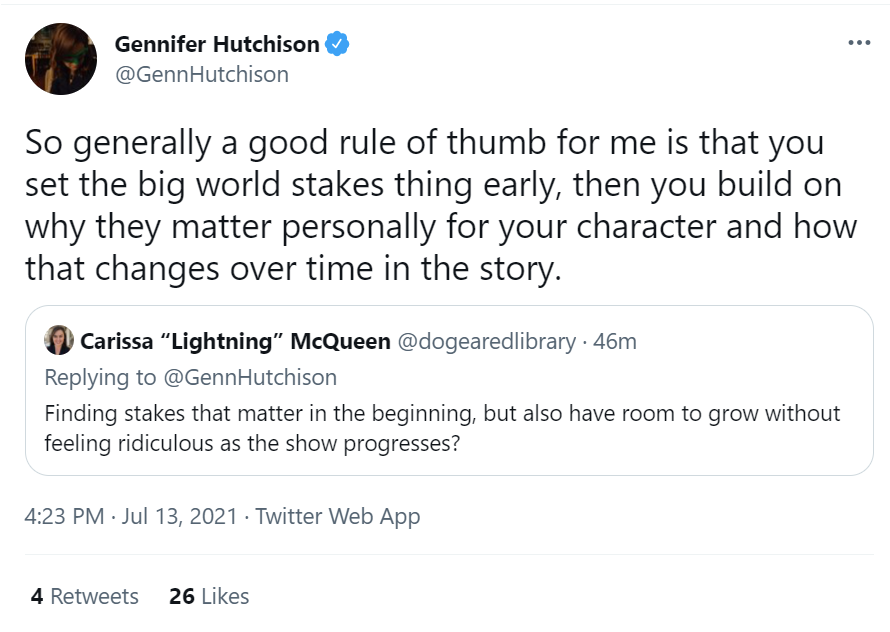 Quesoextreme asked, “Most common reasons a story goes into the ditch and gets stuck or otherwise seems to just fail as a narrative after a strong start?”

She answered, “Trying to force the characters to follow the story in a way that is counter to their nature without accounting for that conflict.”

“Like basically getting stuck on a story HAVING to happen a specific way and violating the integrity of the characters to do so. Just falls apart,” she added. 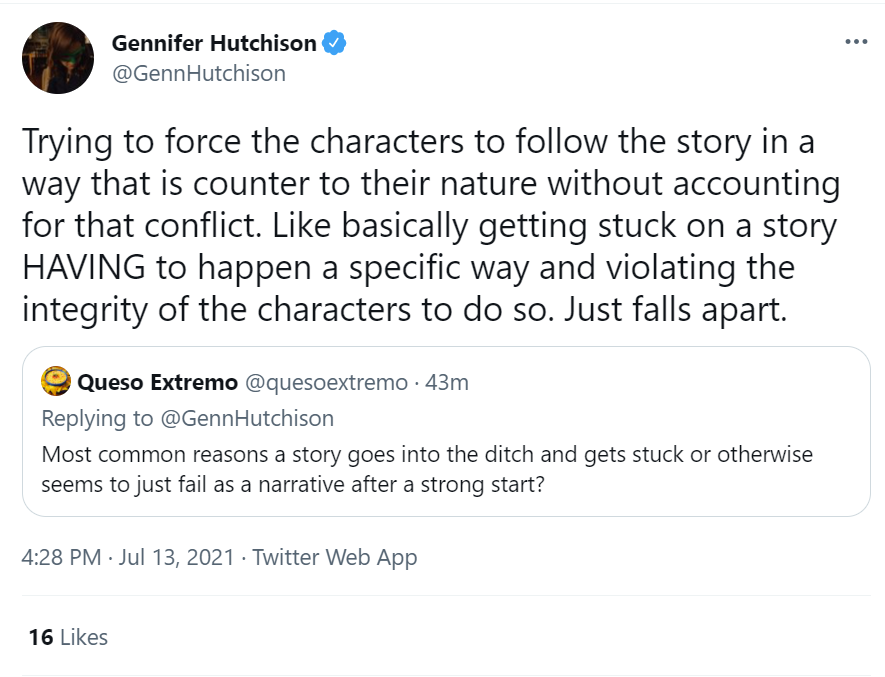 Robertdee asked, “What would you say are the ingredients of a kicka** female protagonist?”

Hutchison answered, “Like all characters, she should feel like a real person and not a collection of (cool) traits. What does she want? Why? What’s standing in her way both externally and internally? What mistakes does she make and why?”

She added, “Just make her a person with a real point of view.” 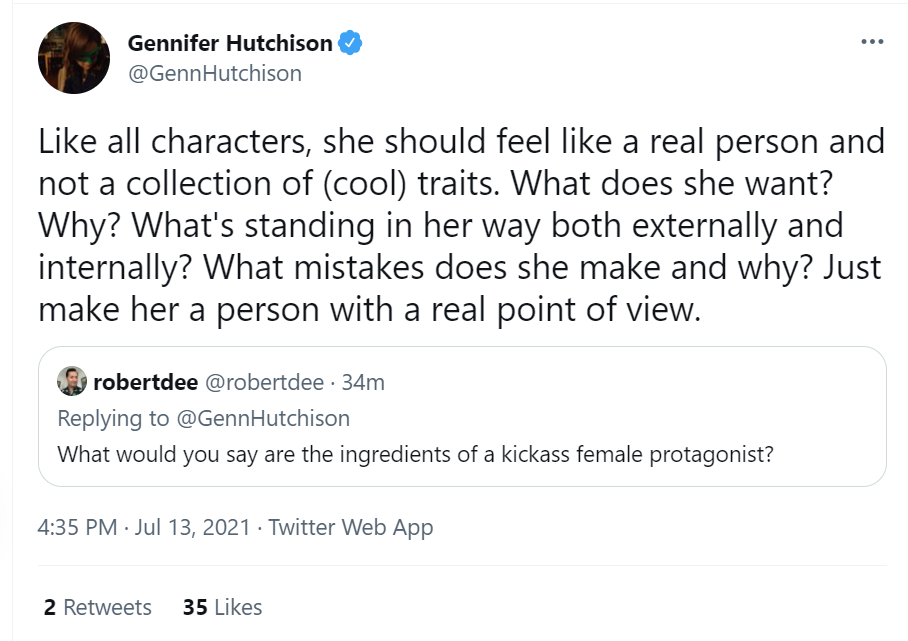 Next, jnrkptweets asked, “How should one tackle the job of rebooting a beloved television show?”

Hutchison responded, “Identify the core of what made that story THAT story. Hold onto that core as you build it out.”

“I find the pitfalls tend to be focusing on the superfluous details of the original show instead of the deeper themes and character. Why do people love it? Focus on preserving that,” she claimed. 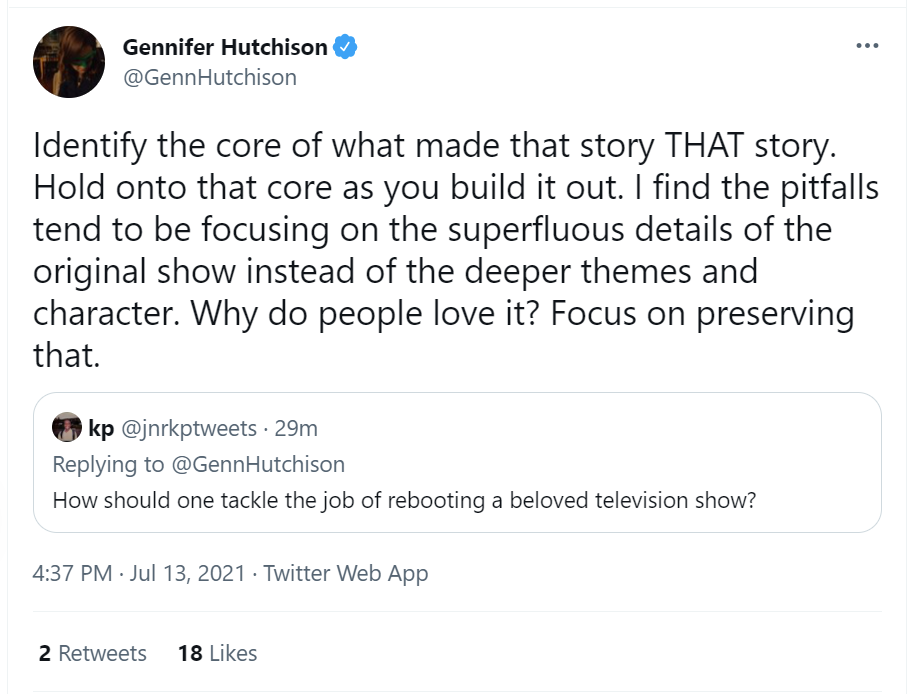 Finally, Gravelroad435 asked, “Do you have any questions you have in your head when you start breaking story or to get into the characters head?”

Hutchison laid out four questions. She tweeted, “What is this person’s core value/need? How do they want the world to perceive them? What are they struggling with? And what makes that struggle harder? 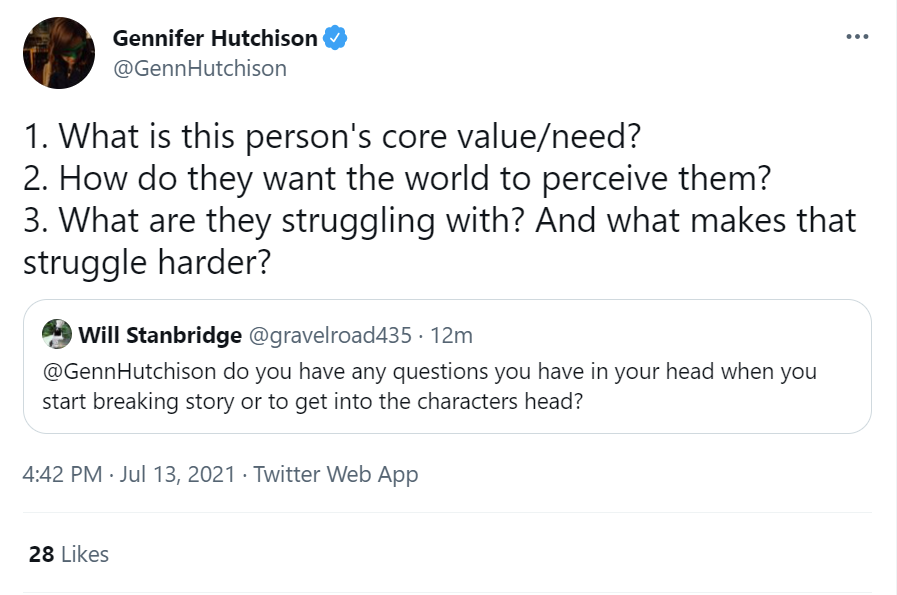 What do you make of Hutchison’s answers?