In light of the recent news that Activision Blizzard has been hit with a lawsuit over their alleged fostering of a “frat boy” workplace culture, Ratchet and Clank: A Rift Apart character artist Xavier Coelho-Kostolny recently put forth a disagreement between the game’s writers and directors over the “feminine” appearance of the game’s lead female, Rivet, as a purported example of a studio environment which was “hostile to women and all kinds of other marginalized people in gamedev.” 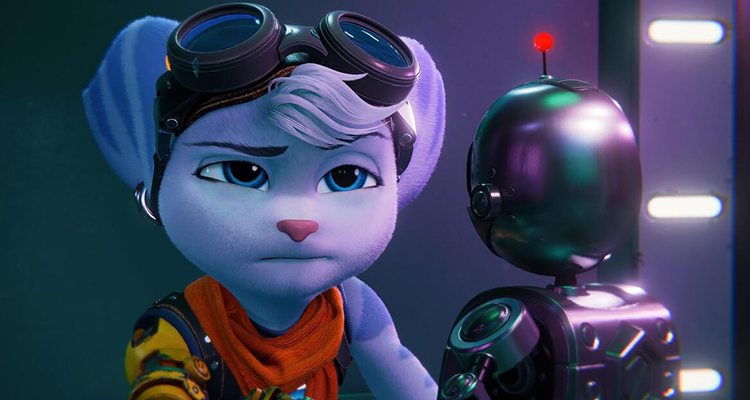 Coelho-Kostolny recalled the incident on July 21st, taking to his personal Twitter account to tell his “fellow men in gamedev, especially those just now entering the industry,” that There are a lot of things you may run into that aren’t directly harmful to people in the same way as sexual harassment, but they still contribute to hostile environments and harm.” 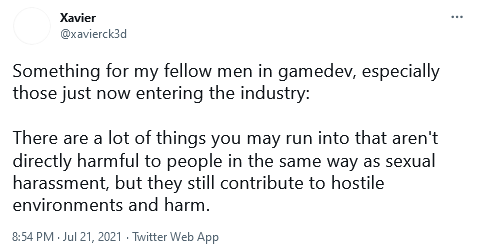 “There’s a strong chance I’m going to get flak for saying this publicly,” he continued, “but it’s worth bringing up because it’s an example of how small things contribute to building environments that are hostile to women and all kinds of other marginalized people in gamedev.”

The character artist then detailed how, “When I was on the latest Ratchet and Clank game, there was an incredibly heated discussion that happened between the game director, art director, the lead writer, the lead character TD, and myself,” about “Rivet, the female lead.” 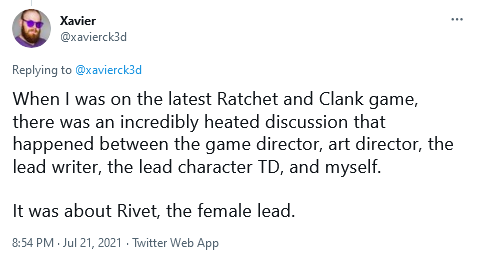 “Note that three of the people above, including myself, are no longer at Insomniac,” he added, before noting that he was “not going to tag them because they’re adults I trust to comment if they feel it’s appropriate.”

According to Coelho-Kostolny, “the discussion — or argument, really — was basically about whether we should make Rivet look more stereotypically feminine looking,” specifically whether she should “have wider hips, visible breasts (or bumps in her suit), and other physical traits we normally associate with cartoony women.” 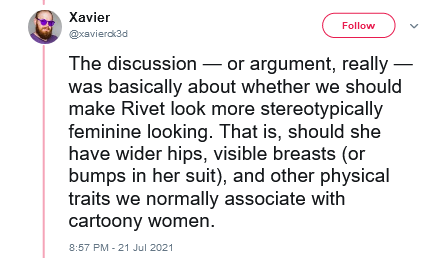 “The argument basically broke down like this:” he explained. “The game director and art director wanted her to have a visibly, fairly stereotypically feminine look. The lead writer, the lead character TD, and I wanted to keep her as-is.” 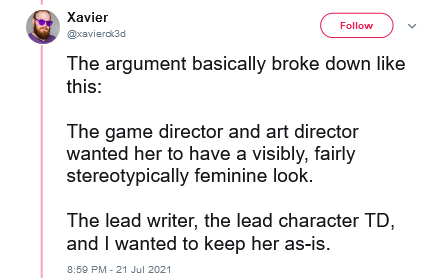 Noting that “this is where things get into territory that men like myself in gamedev need to pay REALLY F—ING CLOSE ATTENTION,” Coelho-Kostolny also described how “the lead writer was a woman. The lead character TD was a trans person who, at the time, had not transitioned,” while “everyone else in the discussion was a white cis male.” 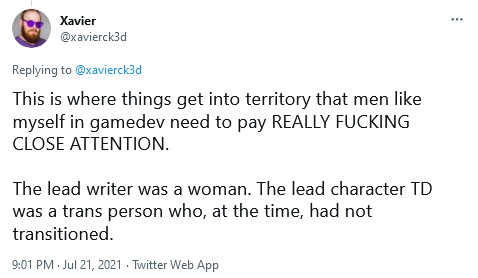 “At the time the argument occurred, there were two women and one female-presenting trans person on the team. That trans person had lived their life up to that point as a woman, and had the lived experience thereof. Everyone else on the 20+ person team was a man,” he described. 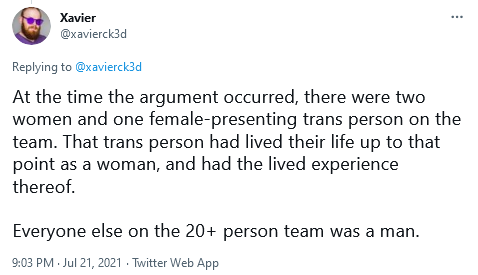 “So,” he said, “Two thirds of the women on the team, as well as one cis white man (me), were telling the art director and game lead that Rivet should not, as an alien space fox, have wide hips and titties.” 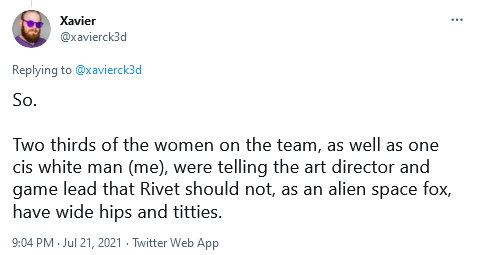 As listed by Coelho-Kostolny, the main sticking points for those opposed to Rivet being depicted as more ‘feminine’ were their beliefs that “It went against the message of the game, which is that anyone can be a hero regardless of how they look,” “You don’t need to be stereotypically feminine to be a woman,” and “RIVET IS A F—ING ALIEN SPACE FOX, JUST LIKE RATCHET.” 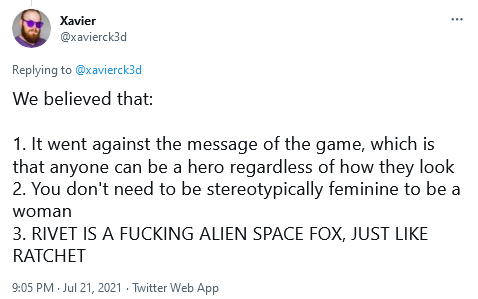 “The argument had been going on for about half an hour before I finally pulled one of the framed Ratchet and Clank posters down from the wall, put it in front of both leads, and told them to look at the damn thing and tell me how much Ratchet looked like a human man,” he revealed. 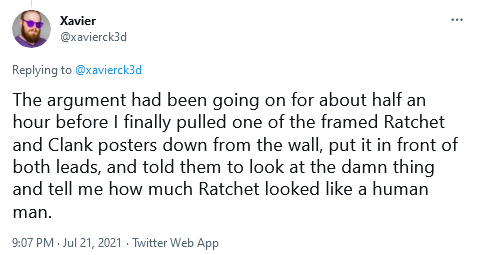 Eventually, said Coelho-Kolstony, “The argument largely petered out after that point, with all parties leaving incredibly frustrated, and myself leaving the company a few weeks later.”

In conclusion to his thread, Coelho-Kostolny summarized, “So. Fellow men in gamedev. This is an example of one of the VERY SMALL THINGS that build up over time to make life miserable for women and marginalized people in our industry,” and declared that “something as simple as putting titties on a space rat can harm people.” 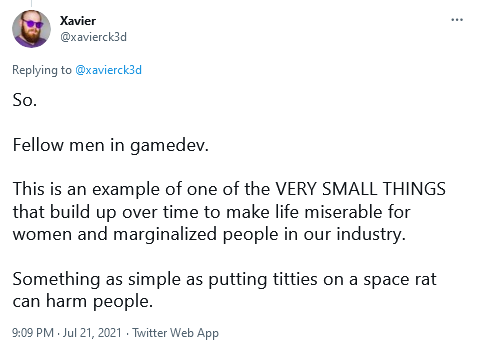 “It breaks people’s trust when you allow things like this to happen unchallenged,” he clarified. “If you don’t push back against tiny little things, like giving Rivet tits, you’re essentially saying those things don’t matter. If the small things don’t matter, where’s the line for bigger things?” 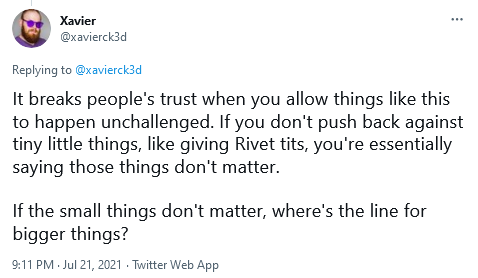 What do you make of Coelho-Kostolny’s stance against a more ‘feminine’ Rivet? Let us know your thoughts on social media or in the comments down below!