Legendary comic book industry veteran Frank Miller, whose bibliography includes Batman: The Dark Knight Returns, Daredevil, and 300, has been removed from the guest list for the upcoming Though Bubble UK Comic Convention after a number of attendees threatened to boycott the event based on their belief that the creator “is responsible for propagation of abhorrent anti-Muslim hate”. 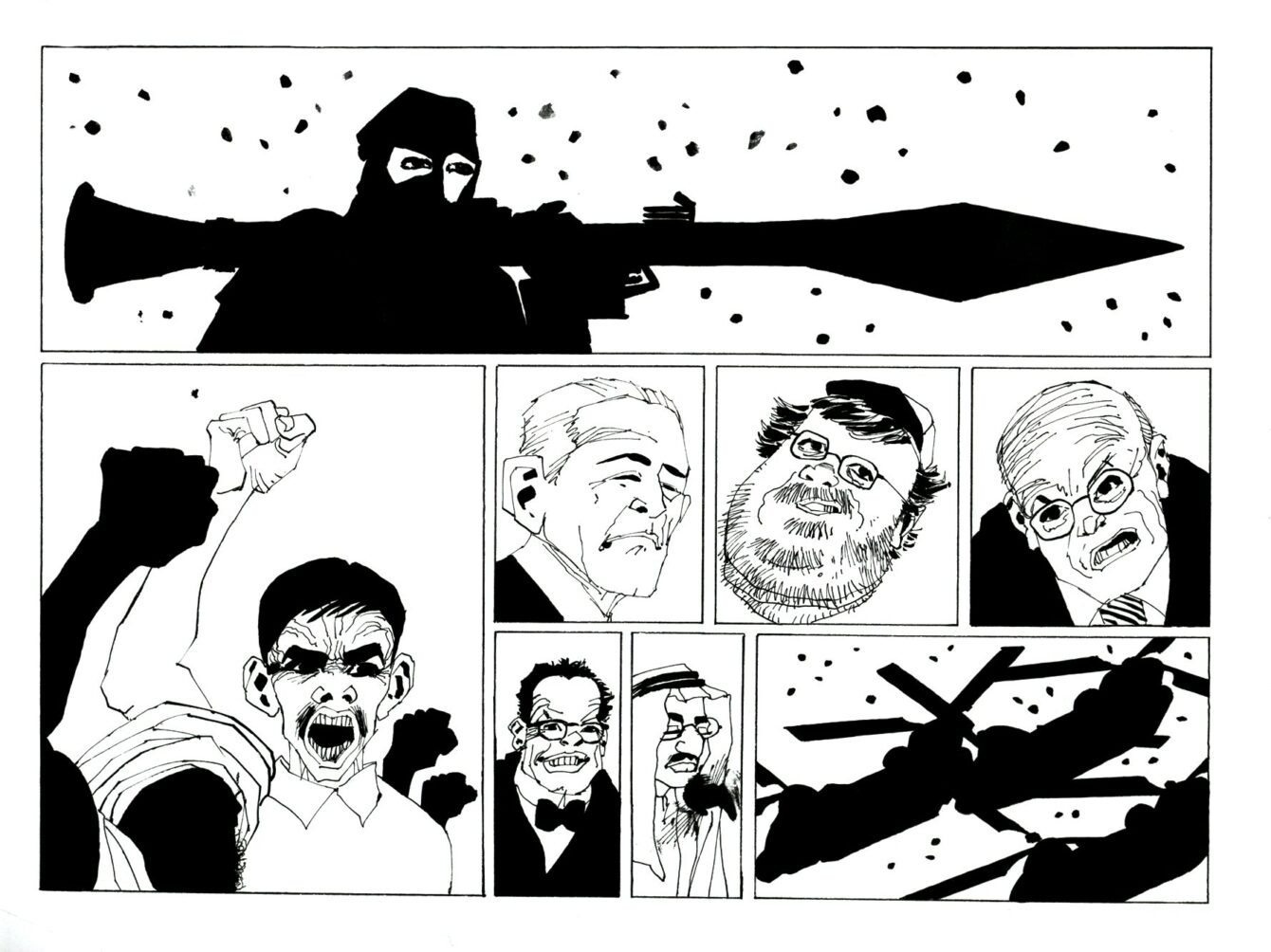 Miller was first announced as a guest for the North Yorkshire, England-based comic convention on June 2nd, with his name being emphasized to the same degree as fellow special guests Joëlle Jones (Wonder Girl) and Christian Ward (New Mutants) on a promotional poster for the event released that same day. 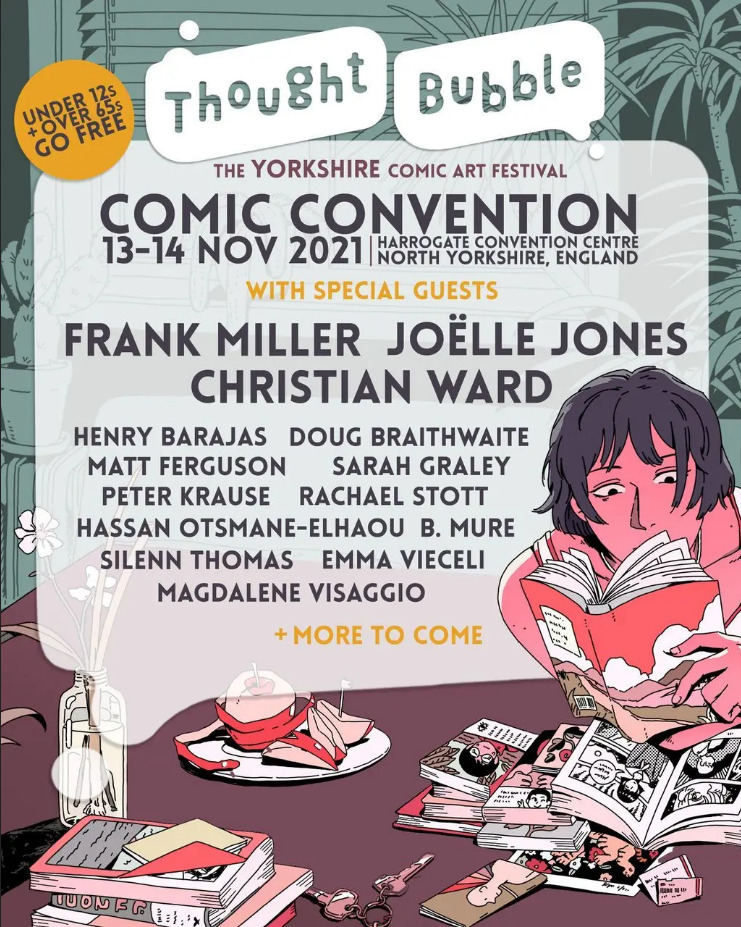 Though Miller’s initial invitation announcement seemed to come and go without any incident, on July 27th, award-winning cartoonist and small press publisher ShortBox founder Zainab Akhtar revealed that they would “no longer be attending Thought Bubble festival this November” in protest of Miller’s attendance.

In a statement announcing her protest of the convention, Akhtar asserted, “As a proud Muslim woman, I cannot in good conscience attend a festival that deems it appropriate to invite and platform Frank Miller, a person who is responsible for the propagation of abhorrent anti-Muslim hate, particularly via his work.”

“Anti-Muslim bigotry is repugnant and condemnable yet has become so deeply rooted, so widely accepted in society that it is not even given a cursory consideration, as evidenced once again in this situation,” Akhtar continued. “I cannot comprehend how time and time again, festivals and communities within comics espouse values regarding inclusivity, diversity, ‘comics being for everyone’, zero tolerance on hate, but all that lip-service evaporates when they are asked to enact those same values.” 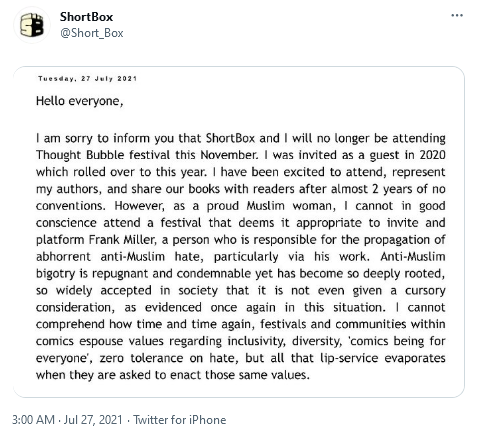 In a follow-up tweet, Akhtar stated that though she had “first contacted Thought Bubble about this privately, 8 weeks ago” and had been “assured action would be taken”, Miller’s continued invitation made her feel as if “it’s been communicated to me that I am the acceptable loss: repercussions to my career/income over repercussions to theirs.” 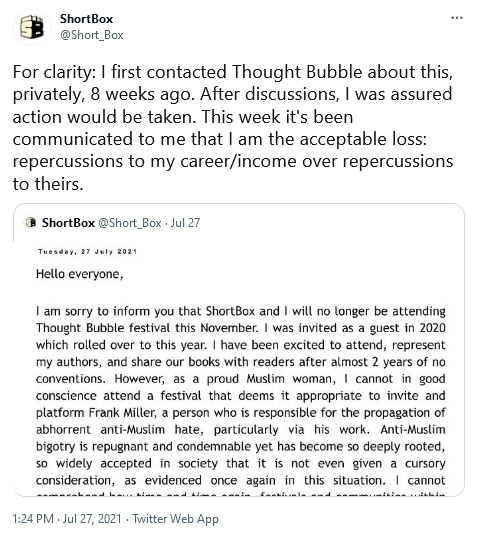 Though Akhtar does not cite any specific instances of anti-Muslim bigotry from Miller, it is assumed that she is referring to his creation of Holy Terror, a graphic novel in which an original character known as The Fixer sets out to battle Al-Qaeda.

Originally developed for DC as a Batman story, Holy Terror would release to widespread criticism, as many believed the story depicted the religion of Islam, rather than the specific terrorist group of Al-Qaeda, as the book’s villain. 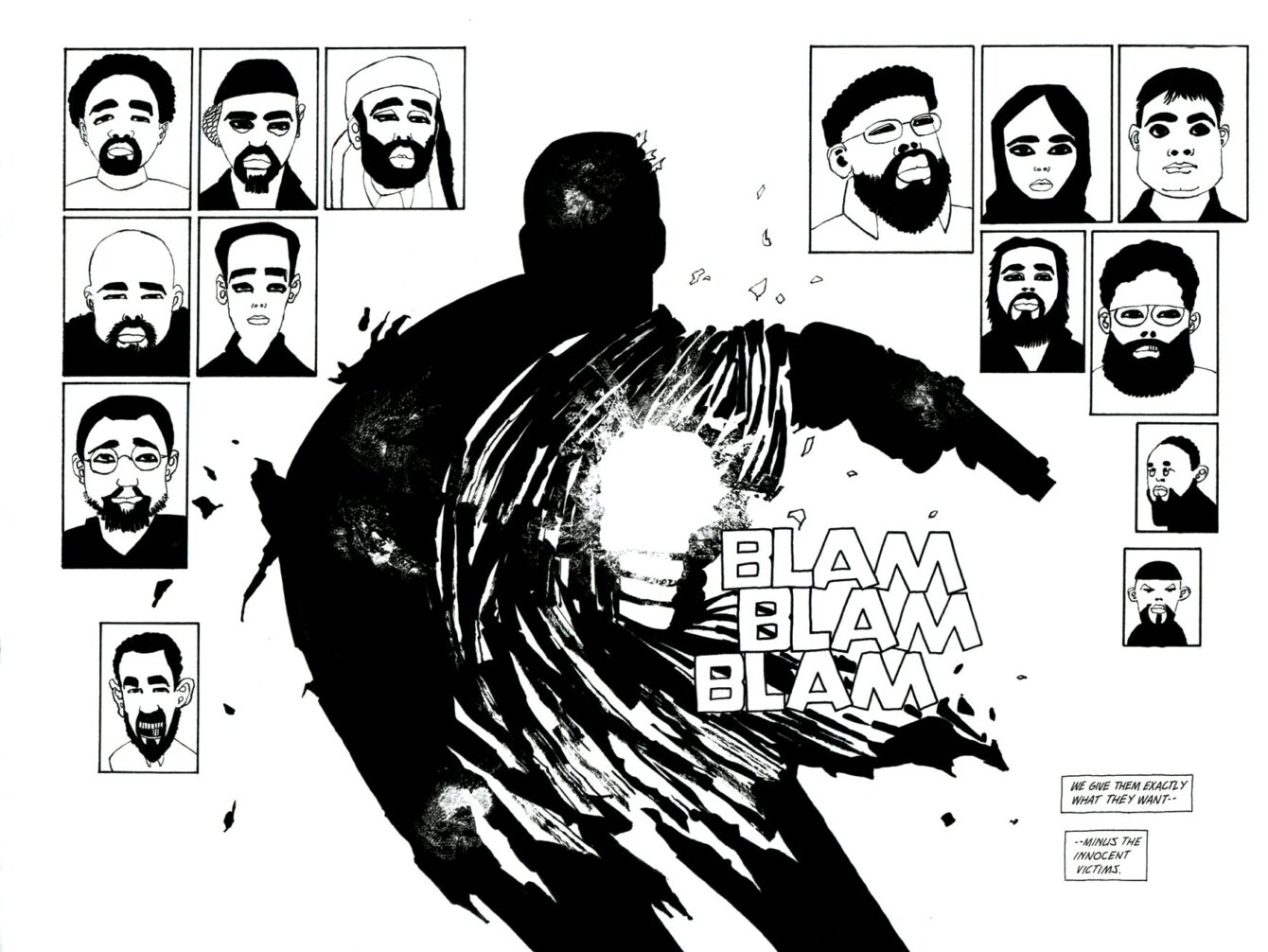 However, while Miller stood by his work upon its publication in 2006, he has since changed his opinion of the self-admitted “propaganda” story.

“When I look at Holy Terror, which I really don’t do all that often, I can really feel the anger ripple out of the pages. There are places where it is bloodthirsty beyond belief,” Miller told The Guardian’s Sam Thielman in 2018. “I don’t want to go back and start erasing books I did,” he replies. “I don’t want to wipe out chapters of my own biography. But I’m not capable of that book again.” 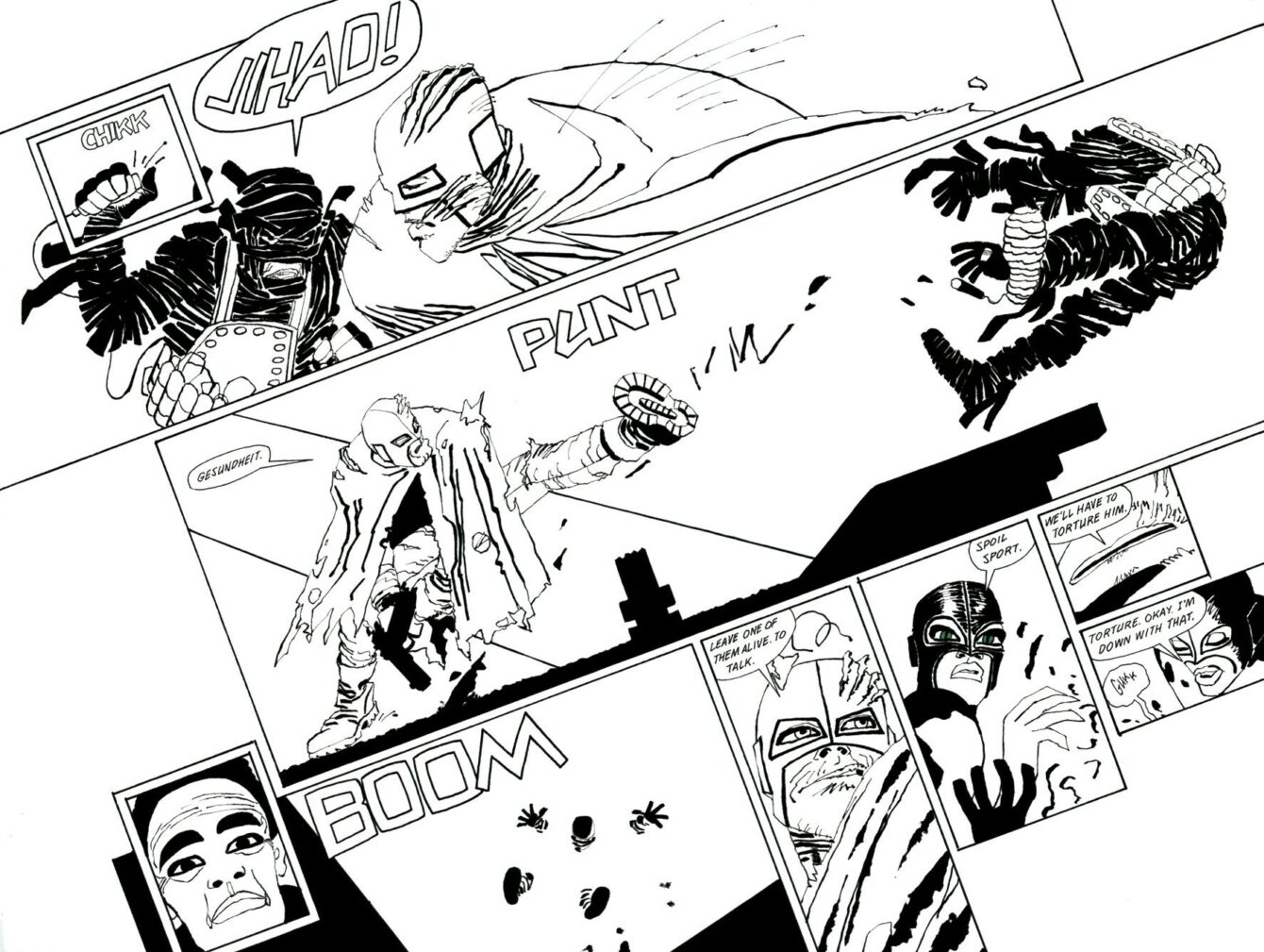 As Akhtar’s tweet soon sparked calls to boycott the entire convention amongst her supporters, Though Bubble ultimately announced on July 28th that “Frank Miller will not be attending Thought Bubble.”

“Over the last fourteen years Thought Bubble has grown into an amazing community of comic creators and fans who we love, trust and respect. We have let you down, and in our commitment to maintaining Thought Bubble as a safe space for all, we have fallen short,” read the convention organizer’s statement. “We exist to share the art form and its worlds with people. If any individual, group or community feels uncomfortable or excluded from our show then we’ve failed.”

“We know that many of you are disappointed in us, and have been expecting a comment on this before now,” they continued. “We are sorry for our silence while we’ve been trying to fix this. Frank Miller will not be attending Thought Bubble.” 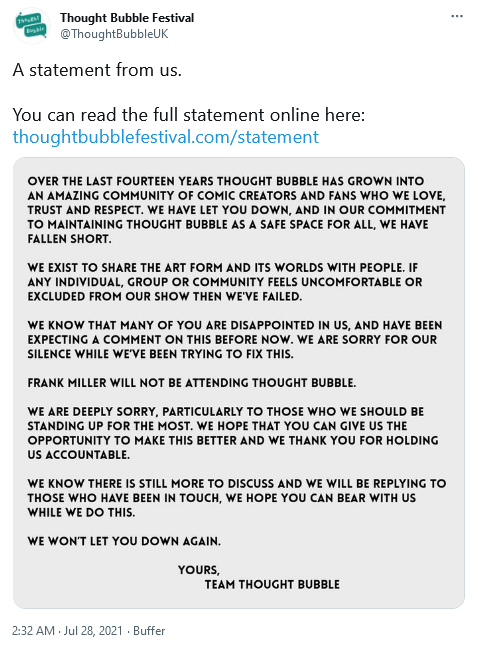 Continuing their statement, the organizers further affirmed that they were “deeply sorry, particularly to those who we should be standing up for the most,” and hoped “that you can give us the opportunity to make this better and we thank you for holding us accountable.”

“We know there is still more to discuss and we will be replying to those who have been in touch, we hope you can bear with us while we do this,” the statement concluded. “We won’t let you down again.” 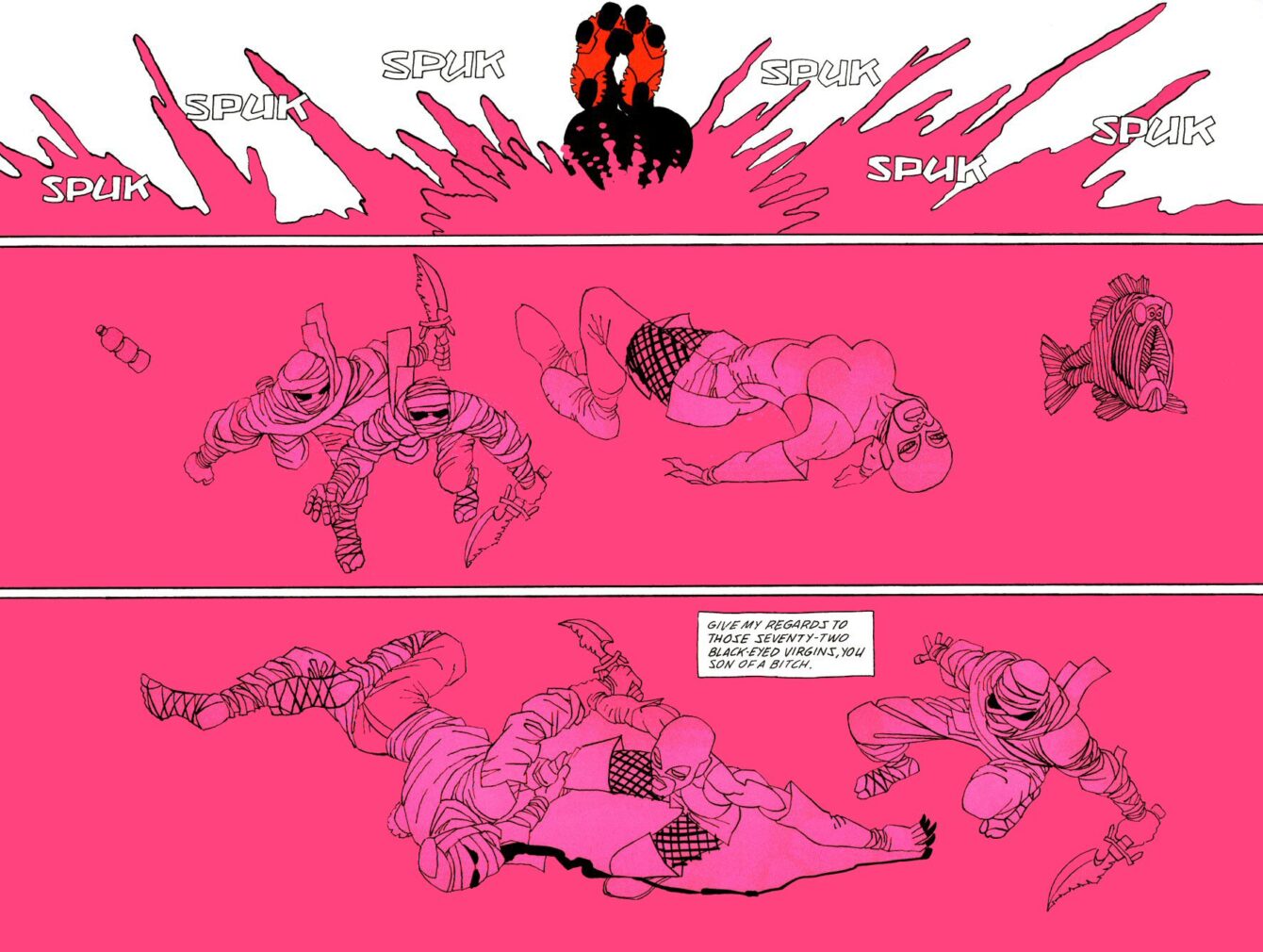 What do you make of Thought Bubble’s disinvitation of Frank Miller? Let us know your thoughts on social media or in the comments down below!