Following the Taliban taking over Afghanistan’s capital city of Kabul, Cars actor and stand-up comedian Larry The Cable Guy put American leadership on blast in a way that only he can do.

Larry The Cable Guy, the voice of Mater, reacted to this news on Twitter.

He wrote, “Our country’s leadership right now reminds me of a wal-mart on Black Friday when only 2 cashiers are working and no one can find a manager.”

The comedian didn’t stop there in a post to Twitter on August 18th he mocked The United States of America’s Ambassador to the United Nations Linda Thomas-Greenfield.

Thomas-Greenfield appeared on CNN where she stated, “We have expressed in no uncertain terms, here at the United Nations, through a very strongly worded press statement from the Security Council that we expect the Taliban to respect human rights including the rights of women and girls. We have also indicated that they have to be respectful of humanitarian law.”

🇺🇸 Ambassador Linda Thomas-Greenfield says U.S. expressed “in no uncertain terms” at the United Nations through “a very strongly worded press statement” from the Security Council that “we expect the Taliban to respect women’s rights” and “to be respectful of humanitarian law.” pic.twitter.com/32TEyRFu4O

Larry The Cable Guy reacted to this writing, “Nothing scares terrorists more than a strongly worded press statement.” 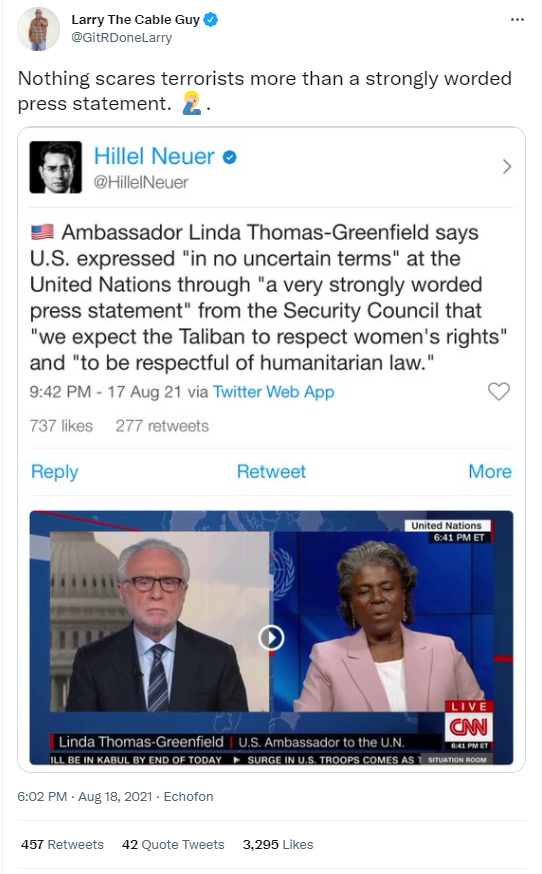 On August 16th, Larry The Cable Guy also retweeted Fox Nation’s Lara Logan when she shared a recent article by Victor Davis Hanson on American Greatness titled “Are We in a Revolution and Don’t Even Know It?”

In the article Hanson claims, “The collective madness that ensued from the pandemic, the quarantine, the self-induced recession, the George Floyd killing and subsequent months of exempted riots, the election year, and the resurgence of variants of the Chinese-engineered coronavirus, all ignited the fuse of formerly inert socialist dynamite. And the ensuing explosion of revolutionary fervor in just a few months has made America almost unrecognizable.”

He goes on to flesh out these claims throughout the article before coming to the conclusion, “we are in the midst of a revolutionary epoch and probably most don’t even know it.” 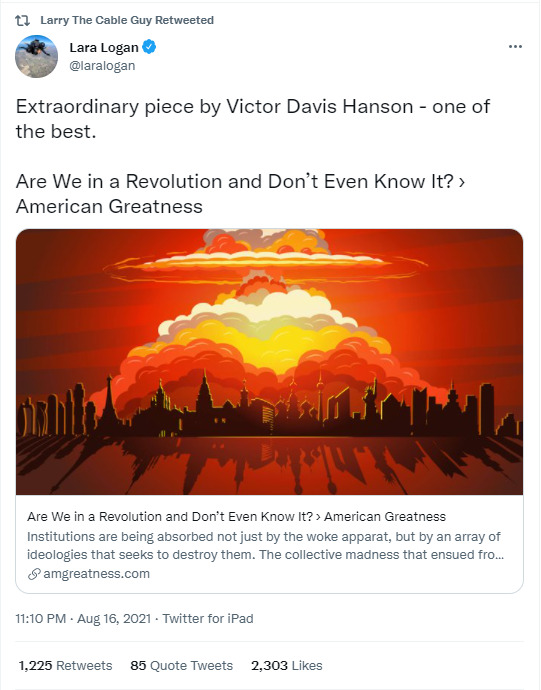 What do you make of Larry The Cable Guy’s comments about American leadership?