These 10 Image Comics employees announced their union on November 1st on both their website and on Twitter.

They stated, “We, the workers of Image Comics, have formed a union. For years, comics publishing workers have watched our professional efforts support creators and delight readers. Sadly, we have also watched that same labor be taken for granted at best and exploited at worst. Keeping our heads above water was the new normal before the pandemic and since its onset we have been expected to take on even larger workloads with fewer resources.”

“Our workforce, and the comic book and publishing industry as a whole, is overtaxed and undervalued,” they added. 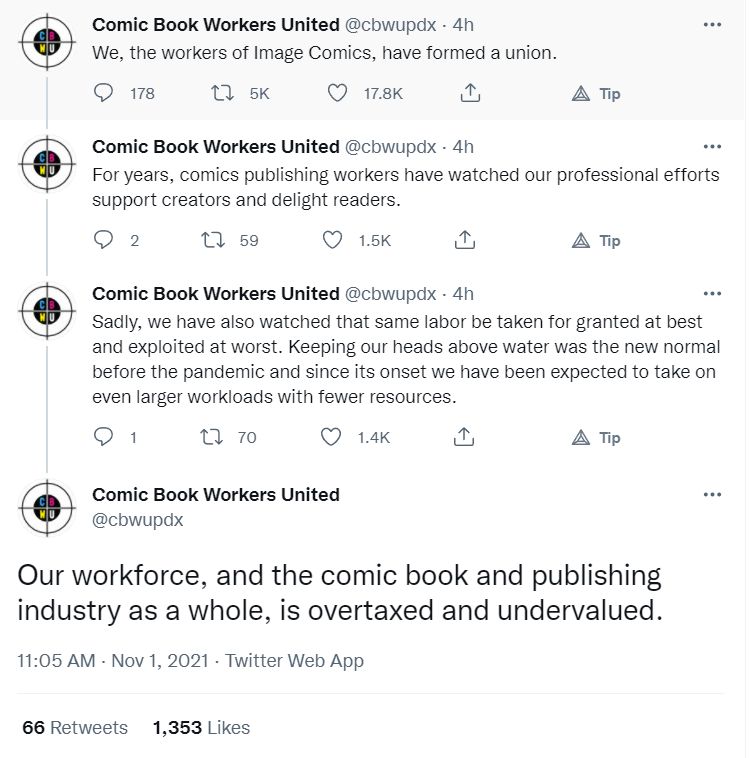 The formation of the union has seen quite a bit of support from comic book professionals.

Archie vs. Predator writer Alex de Campi tweeted, “this is absolutely fantastic and something that comics has needed for a very long time.” 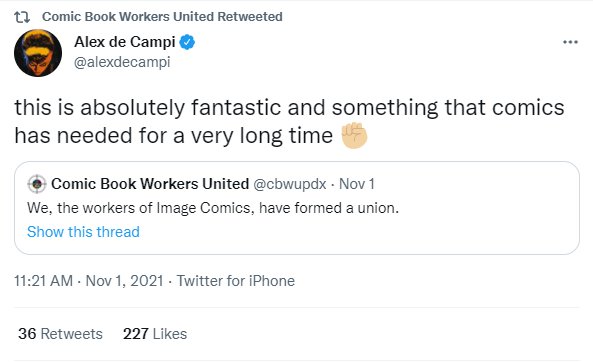 de Campi added, “Comics folk in the past have approached both IATSE and WGA East about getting our industry covered, without real response. I’m glad people are doing it for themselves. It’s long past time.”

Wonder Woman artist Cliff Chiang tweeted, “Incredible news! Bravo to the workers at Image, with sincere hopes for a brighter and more equitable future for all.” 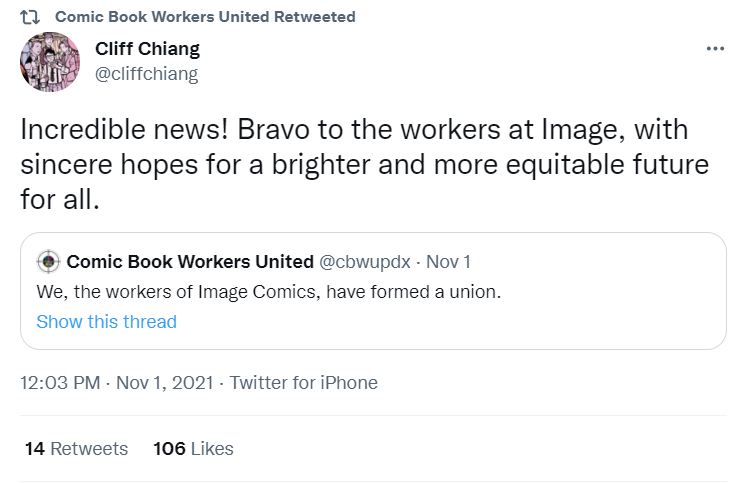 Wonder Woman: Tempest Tossed writer Leila Del Duca tweeted, “I love working with the Image crew and I’m proud of them taking this step forward. Hoping it’s just the beginning for them and the rest of the industry!” 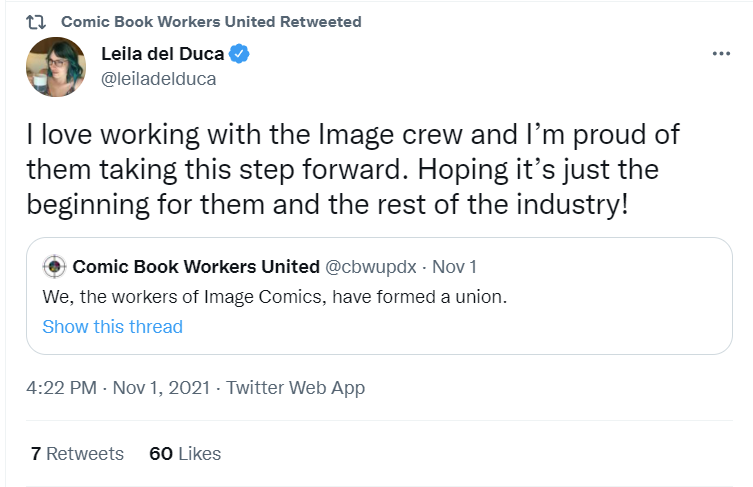 Creator of Shadecraft and Skyward and the current co-showrunner of Netflix’s Lucifer writer Joe Henderson tweeted, “Kudos to the fantastic folks working at Image Comics, and I wish them the very best! #UnionStrong“

DC Comics’ Shadow of the Batgirl artist Nicole Goux wrote, “Comics is in desperate need of increased accountability and workers protections. This is a great start!” 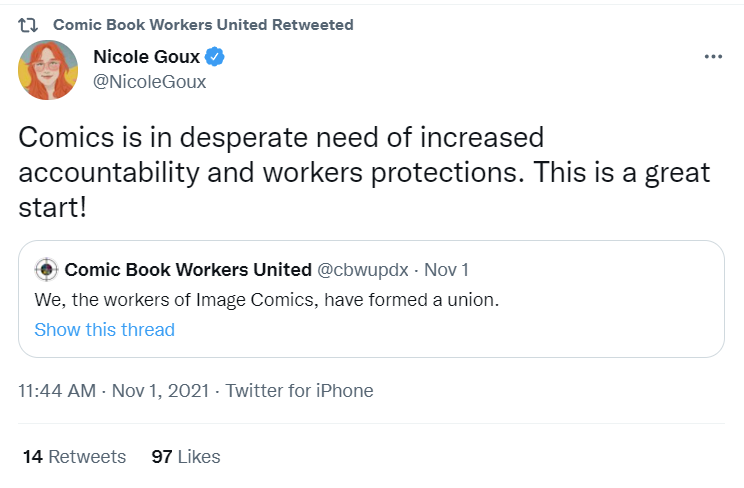 Former G.I. Joe writer Aubrey Sitterson tweeted, “This is excellent news. If you’re at all involved in comics – pro or fan, publisher-side or freelance, editor or creator – and you don’t support this, I have to wonder whose interests you’re committed to defending and/or how you’re lining your pockets.” 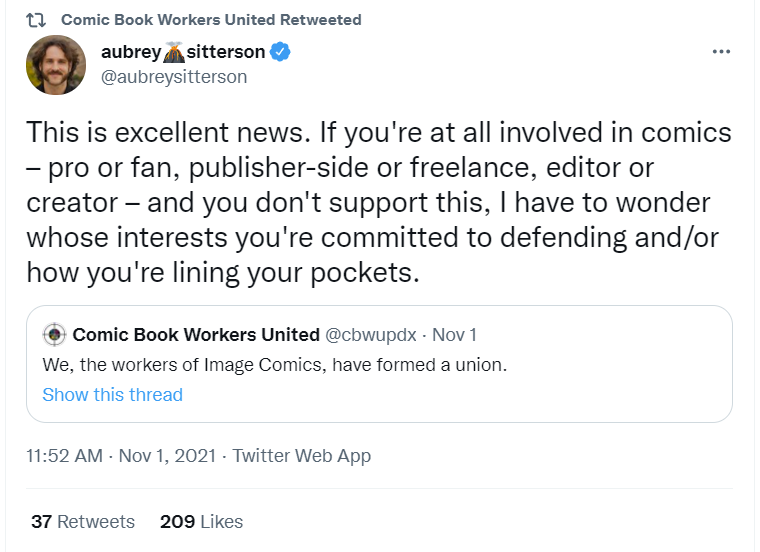 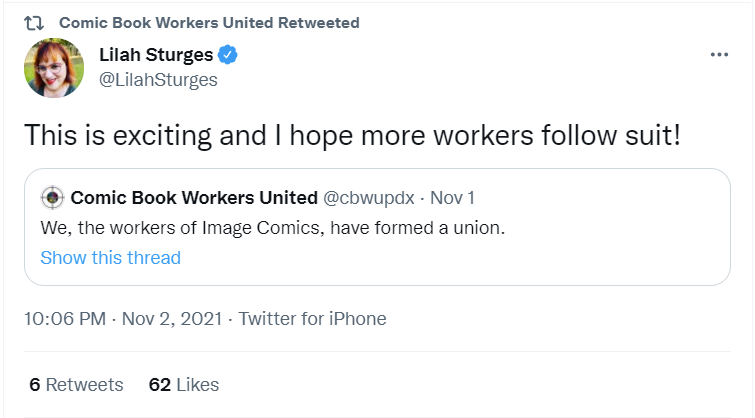 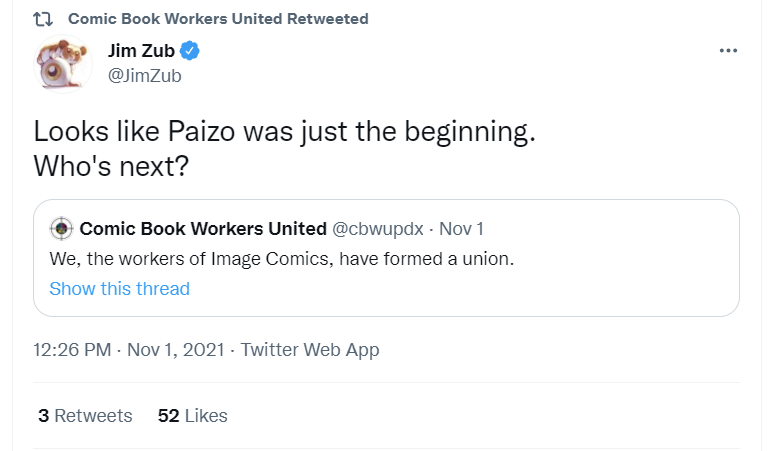 Dozens of others individuals including Richard Pace, Jamie McKelvie, Phillip Hester, and BOOM! Studios Esther Kim, are showcased for showing their support on the union’s website.

Arkhaven Comics’ Lead Editor Vox Day added his name to the growing list of individuals supporting the union telling Bounding Into Comics in a press release, “I think it’s a great, great thing.”

Day who is the author of Midnight’s War and Alt-Hero also added, “In fact, while they’re at it, I would very much like to see the employees at Marvel and DC Comics join the union too. The sooner the old dinosaurs die off, the better.”

On his website, Day also added, “I stand with them. I really, really, do. Great work, CBWU. I could not be more enthusiastic about this exciting new industry initiative. Now get everyone at Marvel and DC to join too, please.” 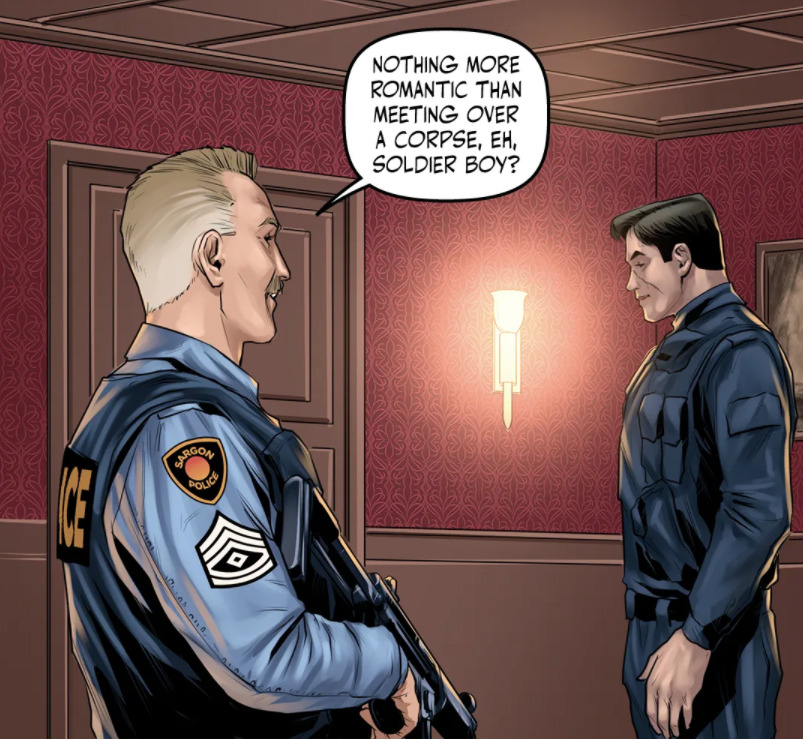 What do you make of Day’s endorsement of the Comic Book Workers United union?