Nearly ten years after the game’s initial release, Mass Effect 2 cinematic designer Edward J. Douglas has issued an apology for his direction of the game’s final ‘romance scene’ between the player character’s Commander Shepard and their honor-bound Asari companion Samara, recently reflecting that he now finds the shot’s framing to feel “predatory.” 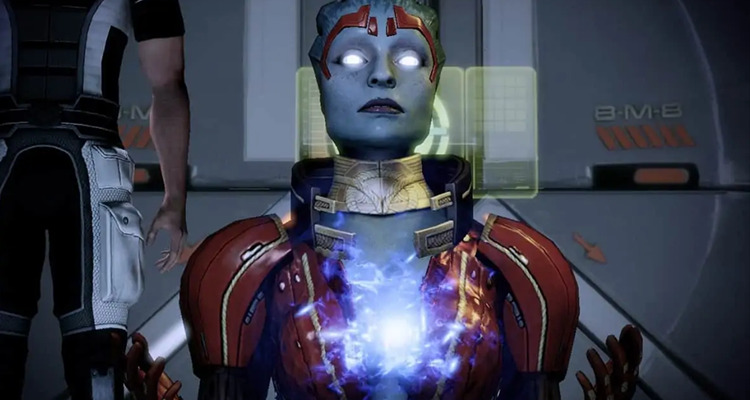 Douglas issued his apology for this scene on November 7th during a lengthy Twitter thread published in honor of N7 Day, an informal day of celebration for the franchise named after Commander Shepard’s in-game military designation, in which he sought to treat fans to some behind-the-scenes insight into “the Samara sequences on the Normandy.” 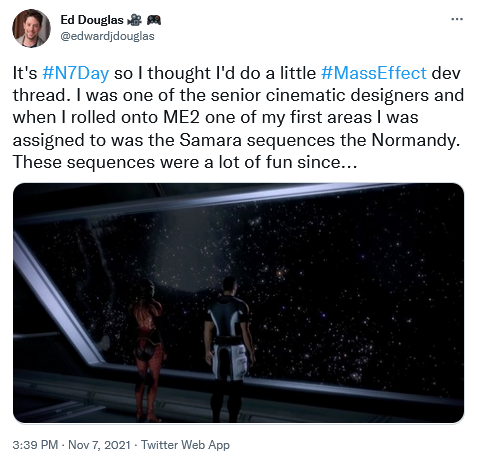 “We wanted to inform & support your current relationship with your crew [during a given run of the game’s story] through blocking, cinematography, and animation, as well as inform the characters themselves,” he began.

In regards to cinematics involving Samara, Douglas recalled that since she “was a grounded, contemplative, meditative character,” he “started her off in compositions with a lot of symmetry.” 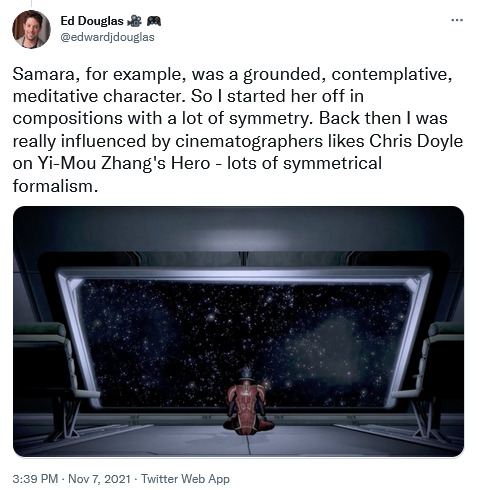 “Early on when Shepard tried to push to get know her better before a real friendship had been established,” he continued, “the blocking & framing would have Shepard intrude into the serenity of that symmetry, subtly reinforcing that dramatic tension.” 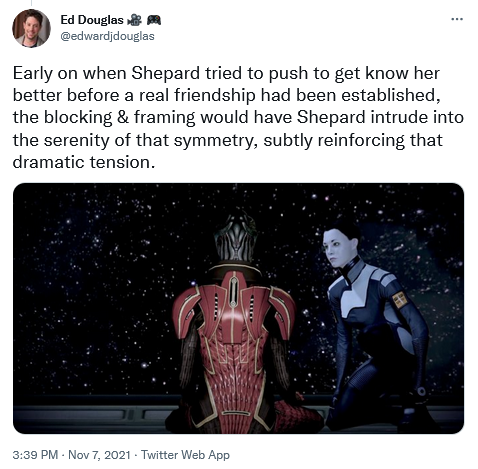 In service of this symmetry, the ME2 cinematic designer explained that as Samara and Shepard grew closer, “Shepard would join into that symmetry, and the scenes would regain earlier initial serenity, now with you as part of it.” 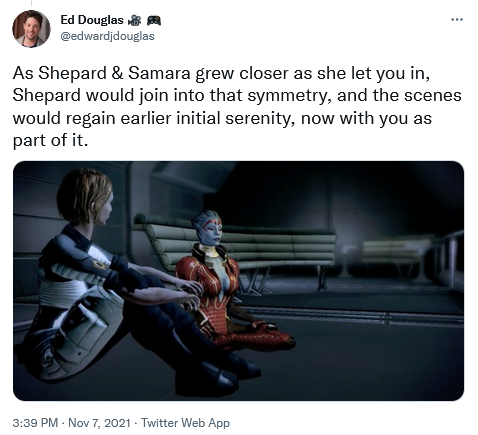 “At the culmination of the ‘non-romance’ thread deep into ME2,” he pointed out, “Shepard and Samara would share frames with equal balance, reinforcing the balance between them and how far you had come together.” 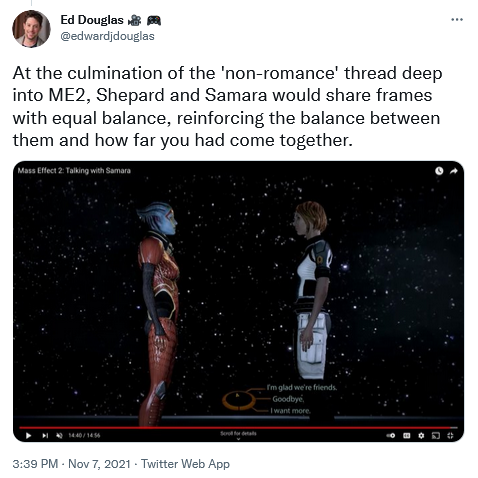 After briefly touching upon a bit of personal trivia regarding his own work history, Douglas next turned to “the romance path” between Samara and Shepard, explaining, “If you get to the final ‘friendship’ stage, (I believe convo 5?) that last symmetrical blocking dovetailed beautifully into the first physical connection.” 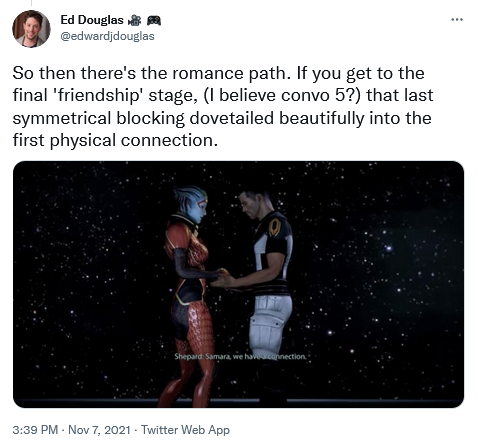 However, he then turned to an element of the scene “that in retrospect, I wish I hadn’t done.”

“As Shepard pushes for a romance & Samara pushes him back, she steps backs off from him. Yet Shepard pushes forward, physically cornering her on the side of the screen,” he summarized, before admitting, “I look at [this framing] now and it feels predatory, icky.” 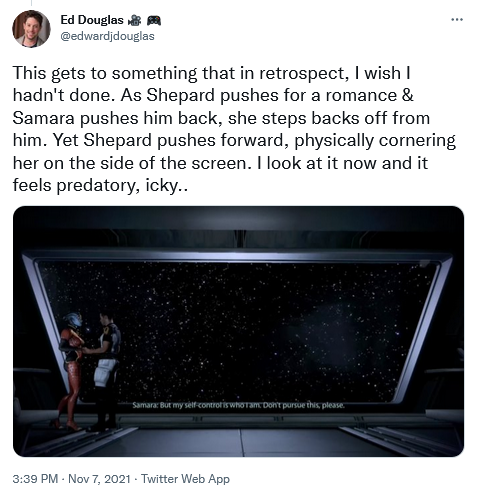 Despite Douglas’ pearl-clutching interpretation of his past work, within the context of Mass Effect 2’s story, this entire moment is clearly far from predatory. Rather, it stands as a moment of painful longing caused by the conflict between Samara’s commitment to the Justicar Code, whose adherents forsake romance and family in order to enact justice across Asari society, and her love of Shepard.

“You’re different from anyone I’ve met…I think I could find more than happiness with you,” Samara tells Shepard during the scene in question. “But my self-control is who I am. Don’t pursue this, please.”

“Not at all how I’d build it today, nor is that the Shepard I’d want to play,” Douglas added. “But we all know that if it came to it, Samara could handily beat down Shepard! So Shepard deserves to be left alone, sad in the corner in that last frame.” 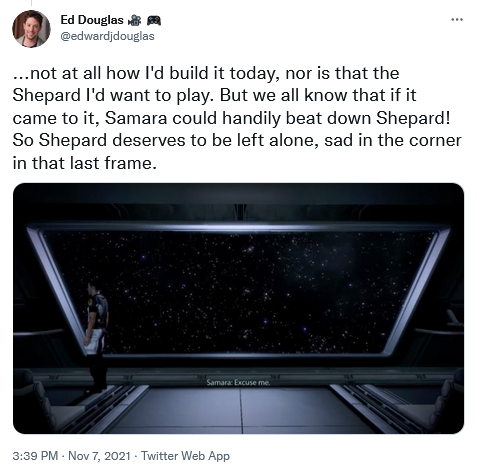 It was here, as he drew his thread to a close, that Douglas apologized for how he directed the scene, writing, “For anyone I made uncomfortable with the staging of those final moments, you have my sincere apologies.”

What do you make of Douglas’ apology for the final scene in Samara and Shepard’s romance tree? Let us know your thoughts on social media or in the comments down below!