Prolific Batman and Punisher writer Chuck Dixon recently revealed the key elements he would include in a Judge Dredd story. 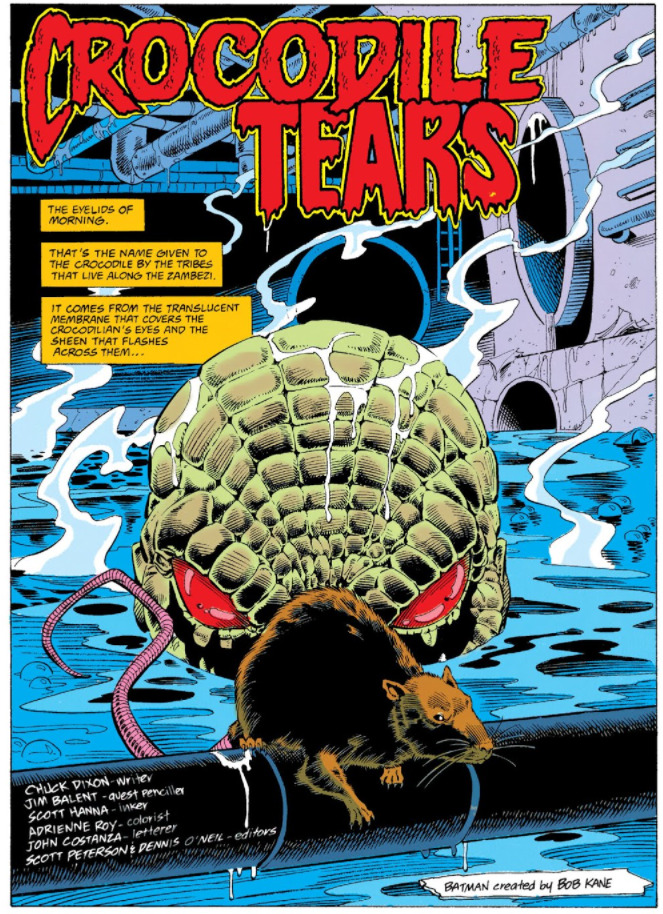 Dixon detailed what he would include in a Judge Dredd story in his most recent episode of Ask Chuck Dixon on his personal YouTube channel.

The topic came up when one of Dixon’s fans, Dara O’Sullivan, asked, “You said in your earlier videos that you would like to write Judge Dredd but the Powers- That-Be  in 2000 AD will only allow British writers to do. What is your favourite Dredd story, and if that embargo was ever lifted, and you got a chance to write Dredd, what elements, characters and villains would feature in your story?”

After detailing a number of his favorite Dredd stories, Dixon turned to the second part of the question where he revealed he actually did indeed send in a pitch for a Judge Dredd story when IDW gained the license for the series.

He revealed, “I did propose when IDW got the series. I did do a pitch, which I couldn’t find. I tried to find for this broadcast to remind me of what I had pitched; could not find it. But you know I got turned down because they wanted an Brit, somebody with an accent different than mine to write the series.” 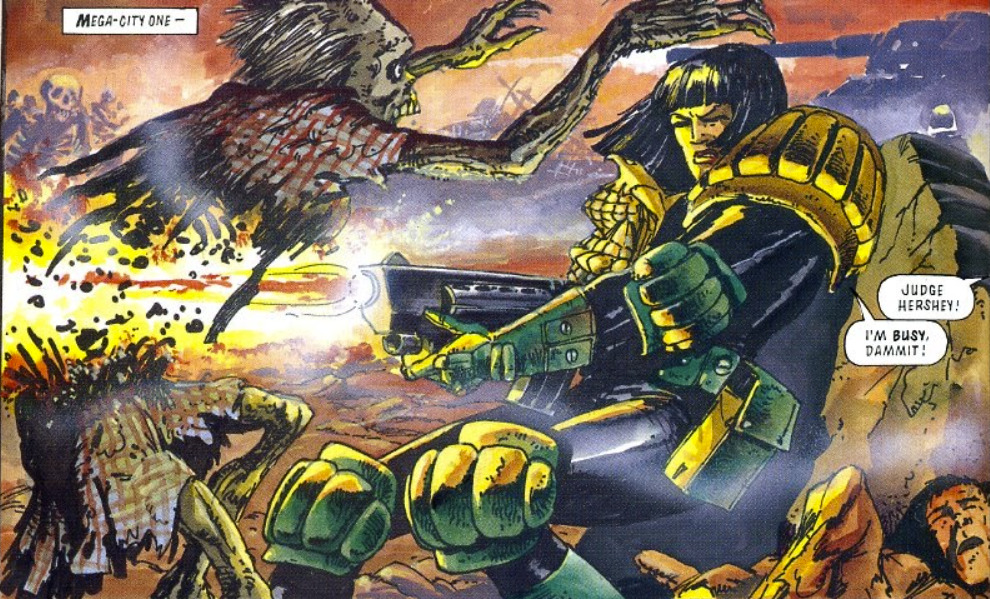 Dixon then went on to detail what he would include in a Judge Dredd series saying, “It would definitely involve Judge Hershey because I love the Judge Hershey character.”

He continued, “And it would definitely involve block wars. And that fascinates the hell out of me. The Karl Urban Dredd movie, I mean it’s a block war movie for the most… There’s not two blocks at war with each other. It’s a block at war with itself and I think that’s really cool.”

“Sort of a claustrophobic interior, windowless, combat arena that’s pretty much endless. And these buildings that are hundreds of stories tall filled with miscreants and filled with lots of innocence and danger and stuff like that. And I could get into that,” Dixon elaborated. 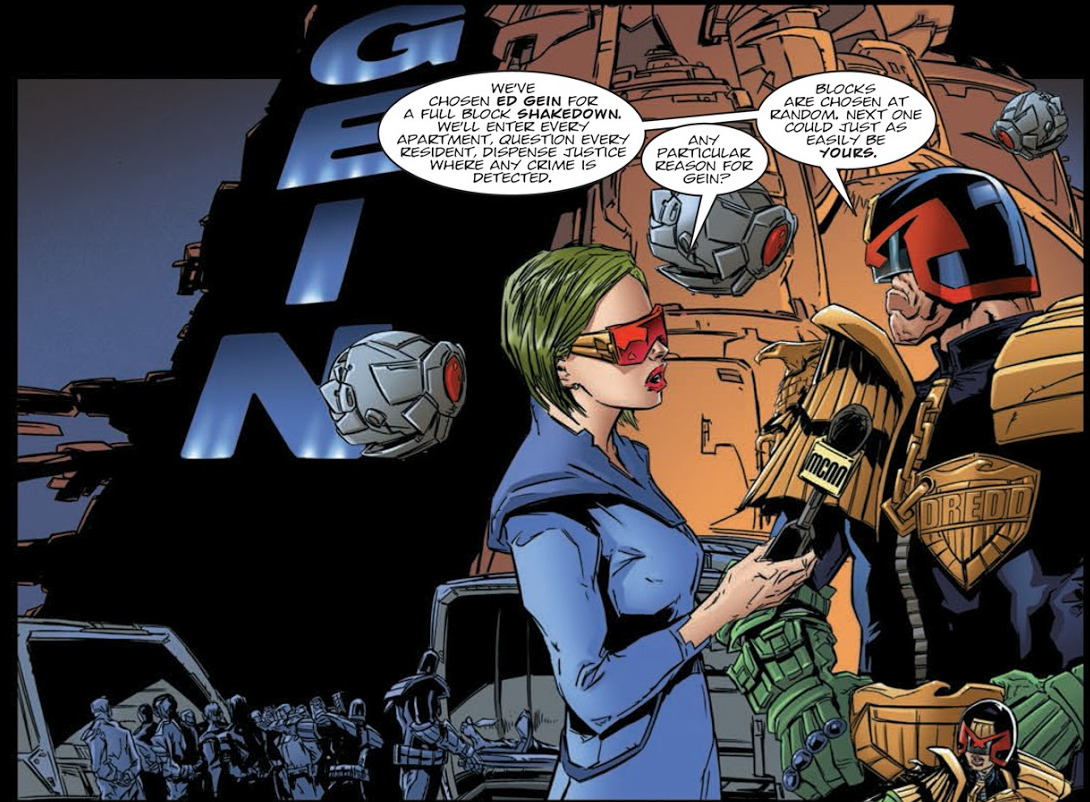 Dixon further stated, “Just thinking off the top of my head, do a block war story where there’s some sort of malignant influence, some mystery to be solved along with all the bloodshed and gun battles in the hallways and stuff like that. That there’s some overall thing that Dredd realizes that something’s not right here. There’s something afoot. Something’s behind this. This isn’t like a normal block war.

“And if we don’t stop it here it’s going to spread to all of Mega City One. And so they have to uncover this malignant alien presence or whatever so that they can win the day and once again bring order to chaos,” he concluded. 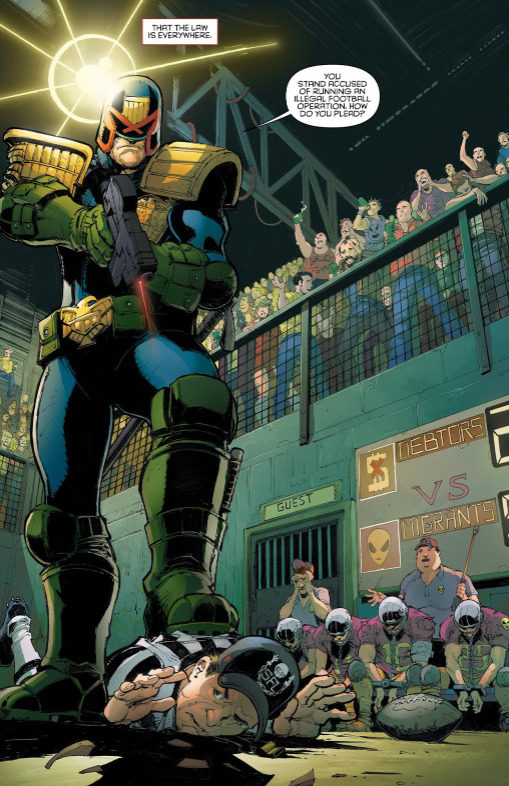 What do you make of Dixon’s ideas for a Judge Dredd story? Would you read a story like that? Do you think Dixon should just create his own character and tell a story like it? Or maybe introduce a character to his Arktoons’ Avalon series that follows a similar plot?