In light of accusations made in recent years that Quantic Dream employees, including CEO David Cage, fostered a toxic and harassment-filled work environment, some fans have called for a media black out on coverage of their newly announced Star Wars: Eclipse, launching the #BlackoutStarWarsEclipse hashtag in the hopes of rallying others to their cause.

The first video game set in the High Republic Era, Star Wars: Eclipse debuted at The Game Awards 2021 with a trailer that showed off a montage of scenes featuring familiar Star Wars imagery – including a lightsaber fight between Jedi, an apparent star fighter attack run on a Neomoidian fleet, and a brief introduction to an early protocol droid – before ultimately ending on the completion of the seemingly villainous ritual whose drum-centric music served as the trailer’s connective tissue.

Though the cinematic reveal largely garnered the mix of wounded excitement and defeated brand apathy typical of recent Star Wars-related announcements, the appearance of Quantic Dream’s logo in the trailer’s final moments caused many a fan to quickly sour on the game’s development.

While many reacted to the news with groans and eye-rolling due to their knowledge of the studio’s typical hamfisted writing and glorified walking simulator gameplay, as seen in their past titles such as Beyond: Two Souls and Detroit: Become Human, others were taken aback due to previous accusations that Quantic Dream was home to a particularly hostile work environment.

Related: From Star Wars: Eclipse To Persona 4 Arena Ultimax, Here Are All The New Announcements From The Game Awards 2021

According to a joint report published by French newspapers Le Monde, Mediapart, and Canard PC in 2018, current and former employees alleged that Quantic Dream was rife with general harassment and unsavory behavior, including the photoshopping of various employees into inappropriate situations, the making of racist and sexist jokes, and Cage’s own assertions that “in my games, all women are whores” and “at Quantic Dream, we do not make games for f-gs.”

Soon after the report was made public, Cage and Quantic Dream denied these accusations and countered its claim by hitting Le Monde and Mediapart with respective libel lawsuits, meanwhile choosing to send Canard PC only two “threatening letters”.

During their pursuit of their libel lawsuits, Quantic Dream did lose one court case in regards to the aforementioned inappropriate manipulated images, with the French Labour Court ruling that the studio was “passive” in allowing what they determined to be “homophobic, misogynistic, racist, or even deeply vulgar” content to circulate within their offices.

However, this ruling was later overturned by the Court of Appeal of Paris, who found that the employee who brought the case against Quantic Dream had been themselves complicit in the situation.

Ultimately, in 2021, the Labour Court ruled on the libel lawsuits, finding in favor of Quantic Dream founders Cage and Guillaume de Fondaumière in their legal action against Le Monde on the grounds that the news outlet had failed to meet their burden of proof due to their refusal to identify their sources, but ruling that Mediapart’s report was made in “good faith” and thus did not constitute libel.

Nonetheless, fans – particularly content creators and podcast hosts – outraged by Quantic Dream’s involvement with Star Wars: Eclipse responded to the game’s announcement by launching the #BlackoutStarWarsEclipse hashtag, calling for the studio to be removed and, consequently, the project to be completely reimagined with another developer at the helm.

“#BlackoutStarWarsEclipse, because basic human rights are more important than having that studio make this DAMN GAME!” declared The GALactic Podcast, a Star Wars podcast hosted by two women. “Looking at you [Lucasfilm Ltd.]!”

Star Wars and general ‘nerd media’ content creator Michael McCoy declared, “We want a new Star wars game, but not one made by a studio with a history of misogyny and racism in their games, a toxic workplace, and with a CEO with no respect for women and LGBTQ+ folks. #BlackoutStarWarsEclipse”.

“The High Republic has put queer characters and BIPOC at the forefront of the story, & there is nothing more insulting, to fans and the storytellers who built it, than choosing to work with someone who openly hates people like the heroes of THR,” she explained.

#BlackoutStarWarsEclipse is about us as Star Wars fans demanding to be seen, to be heard, to be respected,” said YouTuber and podcaster That Gay Jedi. “It is about demanding @LucasfilmGames to look at the hurt they have caused (and CONTINUE to cause) in this collaboration and to reassess the choices they have made.”

In a follow-up tweet, he further opined, “This whole collaboration has put the ‘progress’ of Star Wars (and its continued legacy) into a harsh light and brutal perspective– @LucasfilmGames decision to collaborate with Quantic Dream has proven to be a grim reality check of epic scope.”

In one of the more outright declarations of support for #BlackoutStarWarsEclipse, The Imperial Senate Podcast announced, “Just in case we haven’t been clear, f–k Quantic Dream.”

“We won’t be buying/covering any game from them,” they clarified, before telling opponents, “If you disagree with our view, please feel free to visit our complaints page.”

They proceeded to provide them to a link of an image of Carrie Fisher flipping the bird at a cameraman during the premiere of the 2009 horror film, Sorority Row. 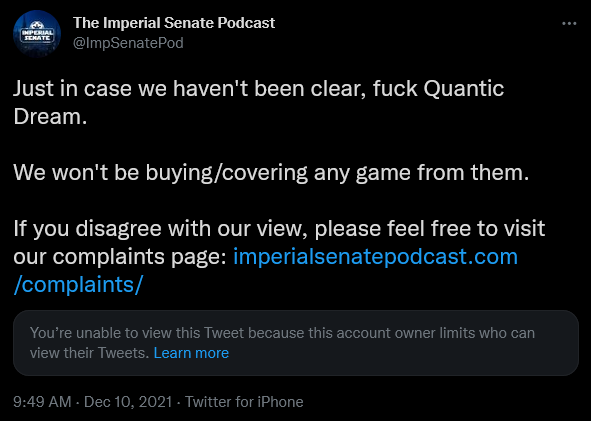 Associate Level Design Director for Zynga’s upcoming Star Wars: Hunters mobile also decried Quantic Dream and David Cage, and then proceeded to encourage people to play her game based off of the characters’ genders, races, and sexual orientations.

First, she slammed Cage and Quantic writing, “I am seriously so so so heartbroken that David Cage is working on Star Wars: Eclipse. This is the man who said: ‘in my games, all women are whores’ and ‘we do not make games for fags.’ and runs a misogynistic, racist, and transphobic studio.”

“This is NOT what Star Wars is about,” she added. 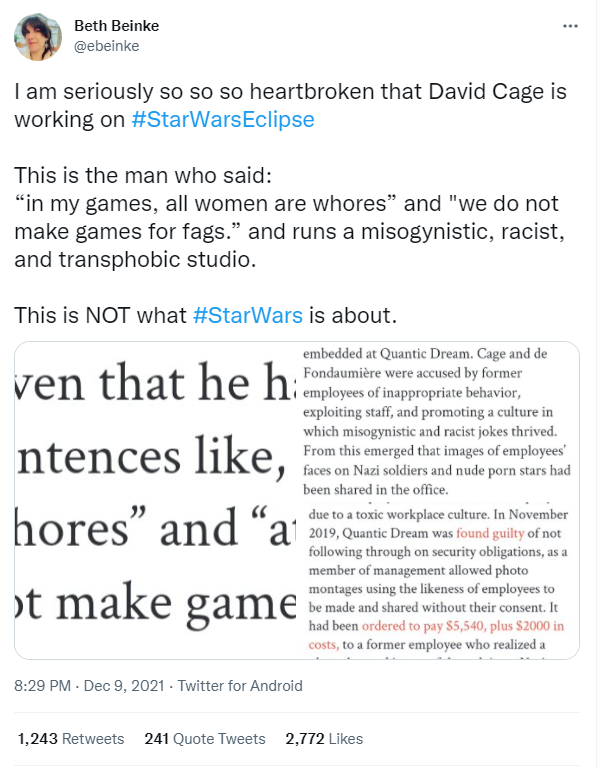 Beinke would then tout Star Wars: Hunters identity politics when on user tweeted her, “Very much hoping Hunters is the opposite of Quantic’s mentality and some of the playable characters are LGBTQIA+! We still haven’t seen any trans women in legends or canon yet lol.”

She responded, “Yep! We have a diverse set of characters currently and planned! (diverse in genders, race/ethnicity, sexual orientation, and SW species). It’s very important to us.” 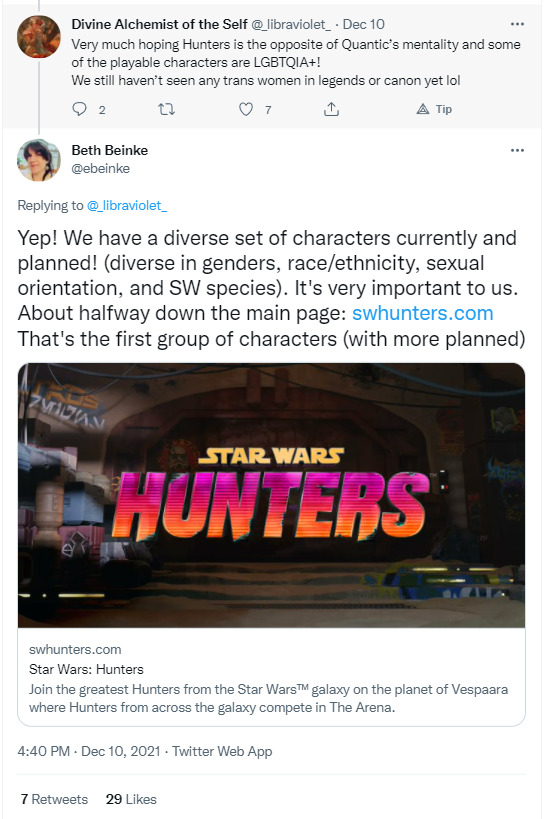 What do you make of the call to #BlackoutStarWarsEclipse? Let us know your thoughts on social media or in the comments down below!