A Valorant designer has backpedaled his use of the racial slur ‘filipinix’ in reference to the game’s newest operator, Neon, after receiving widespread from backlash from players unimpressed with his attempt a virtue signaling.

RELATED: Riot Games Disables /All Chat In League Of Legends In Order To “Cut Down On The Growing Negativity It Has Been Creating”

An Agent capable of wielding electricity to her advantage, Neon is set to join the roster of the popular hero shooter with the upcoming Episode 4: Disruption update, planned for release on January 11th.

Born in Manila, Neon’s Filipino heritage has been emphasized in various ways by Riot Games, from the decorations in her room to outright statements from the game’s staff. Her voice actress, Vanille Velasquez, is also Filipino.

However, perhaps appropriately for someone over-flowing with electricity, her reveal sparked some controversy. 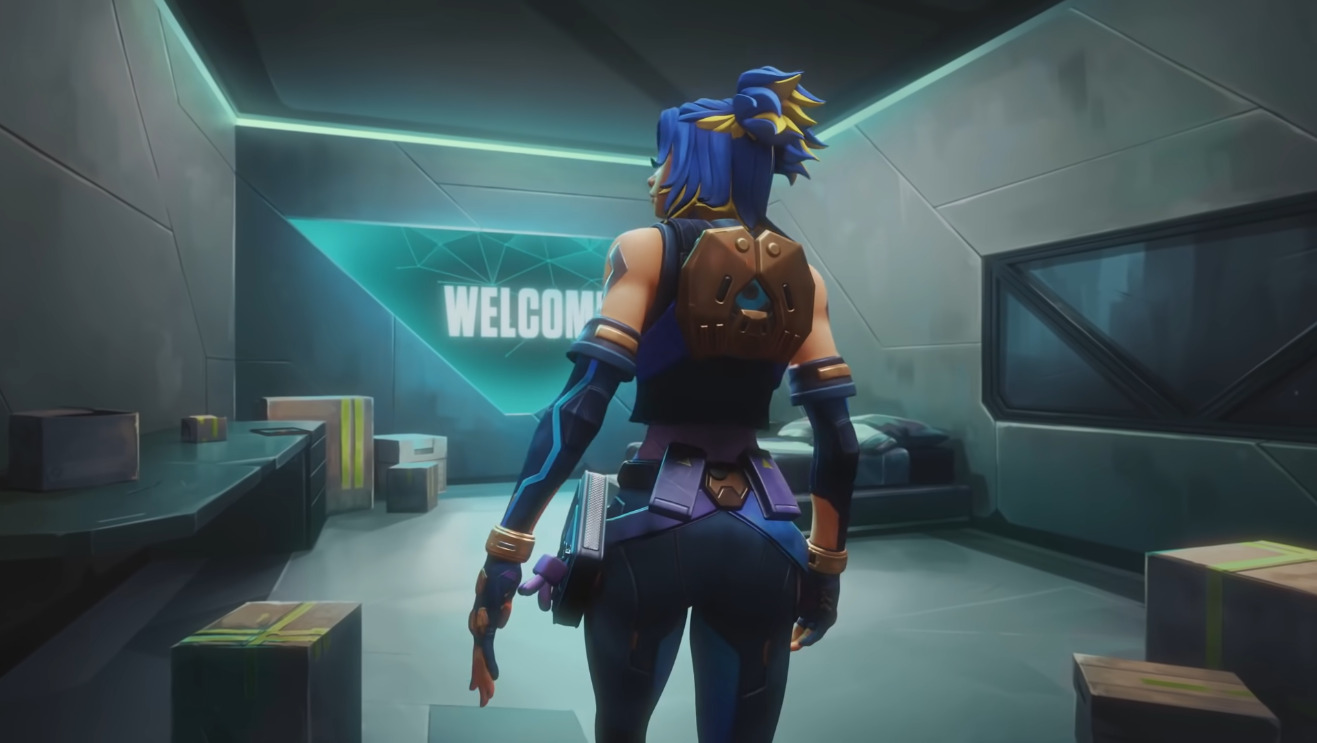 The discourse around Neon began when, in an attempt to show her support for the character’s inclusive diversity, influencer and co-owner of esports organization XSET Erin Ashley Simon tweeted a short profile of “Valorant’s new Filipinix agent Neon”.

“Voiced by a Filipina, designed by a Filipino, a first for the game,” she added, hilariously using the language’s default gendered terms for Filipino individuals. “Representation matters behind the scenes & publicly.” 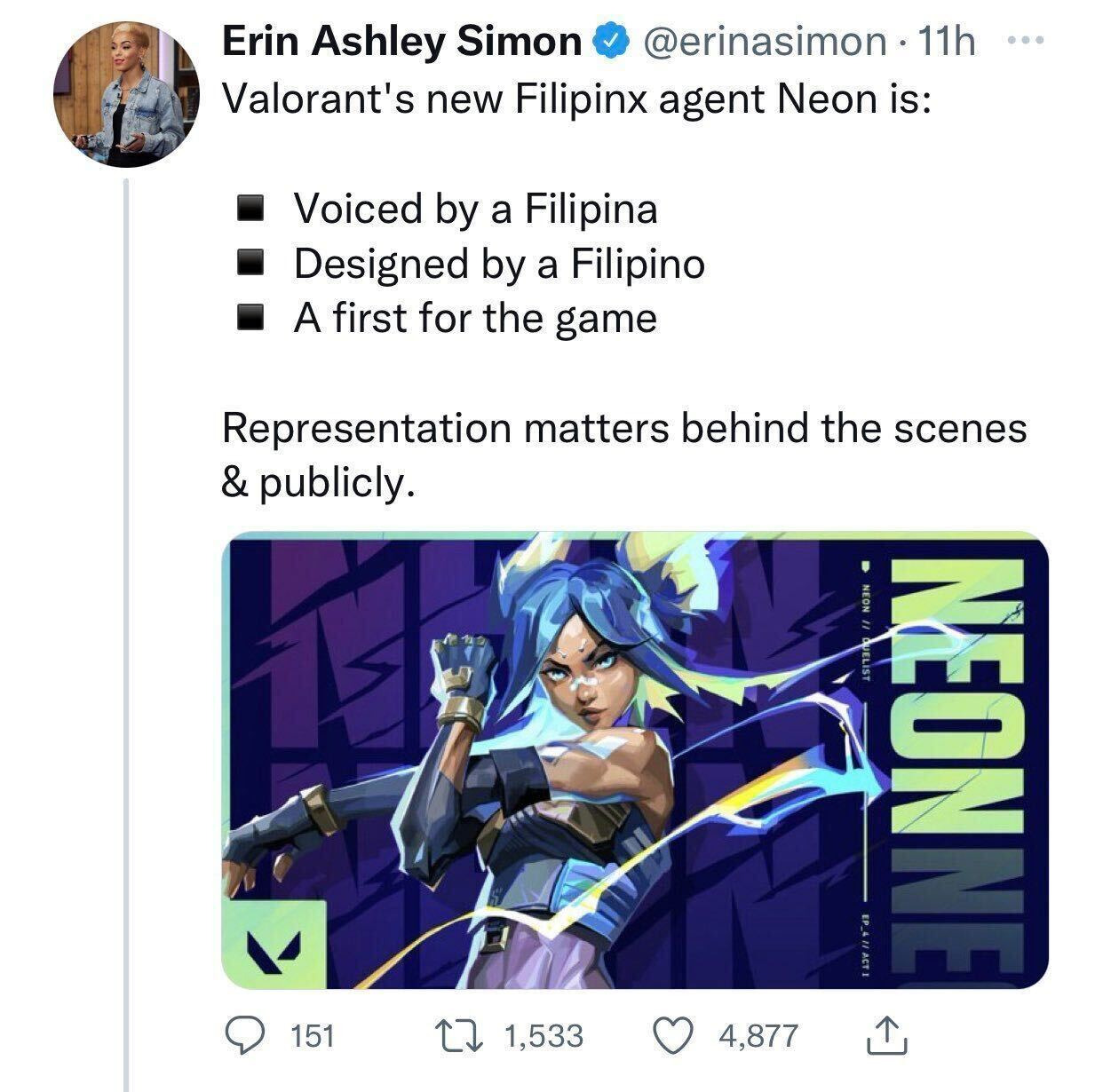 A more standardized version of Tagalog, the Filipino language is mostly made of gender-neutral words, and the identifying term Filipino is one of them. Filipino can mean both a man or people from the Philippines in general, while Filipina is used exclusively for women and girls.

As noted in a recent report by Filipino news outlet The Philippine Star asking “Gender-neutral pronouns aside, is the Filipino language all that inclusive?”, writer Saab Lariosa noted that”the Filipinx/Pinxy debate” was “brought about by the Filipino diaspora (Filipinos living outside the Philippines)”. 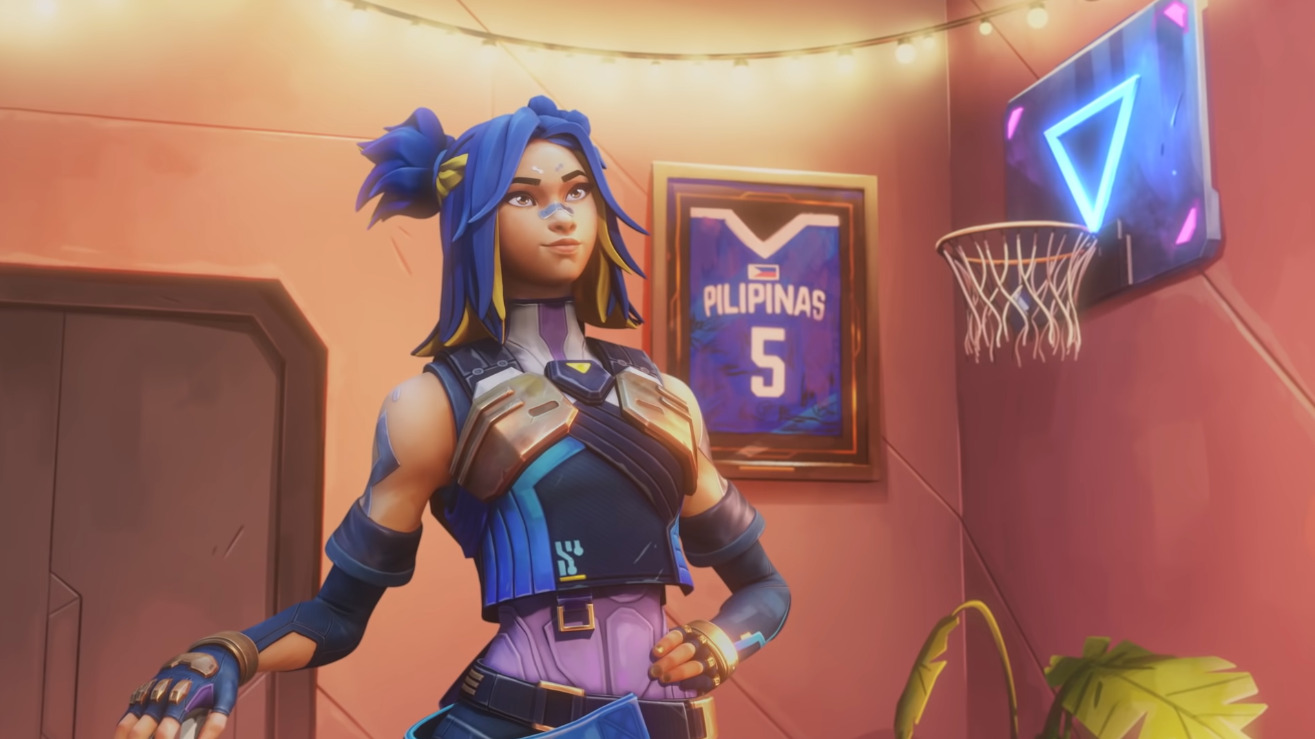 This attempt at creating a gender-neutral term for Filipinos is akin to the attempt to push “latinx”, which replaces the gendered ‘o’ or ‘a’ from the word and replaces it with an undefined ‘x’, as one-such term for Hispanic individuals.

Latinx has been largely rejected by Hispanic and Latino Americans, with many considering it to be a corruption of their language done in order to make progressive English-speakers feel more comfortable.

After receiving a significant wave of backlash for her use of the term, Simon initially she explained that she used ‘Filipinx’ because “A designer behind the agent referred to the character as such. it’s all about being respectful.”

The designer in question, Ryan Cousart – himself Filipino – announced Neon’s Filipinix identity on January 5th, stating in a now-deleted tweet that he was “grateful to have had an opportunity to be part of creating our first Filipinx agent”. 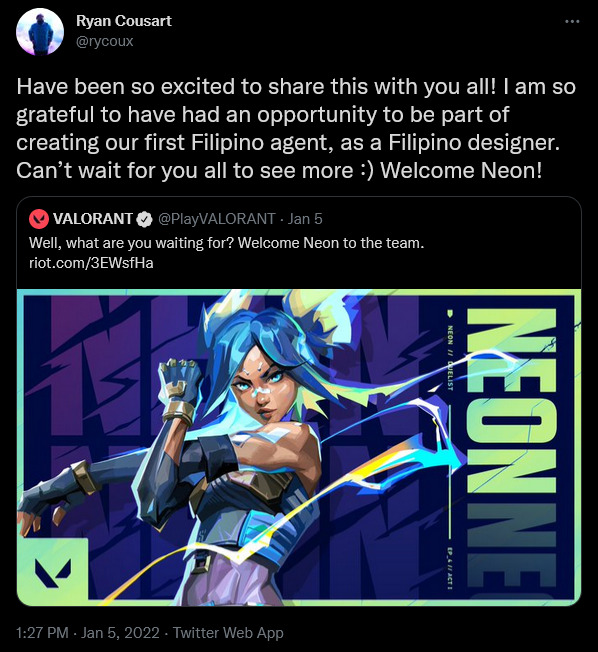 Cousart has since reposted his tweet with “the proper use of Filipino”.

Interestingly, Riot Games themselves has not used the term during their Filipino American History Month Recap news post- but had used Latinx Heritage Month Recap.

Further, in Neon’s teaser announcement, the only Filipino words used were “Maraming salamat!”, which translates to “thanks a lot!”. 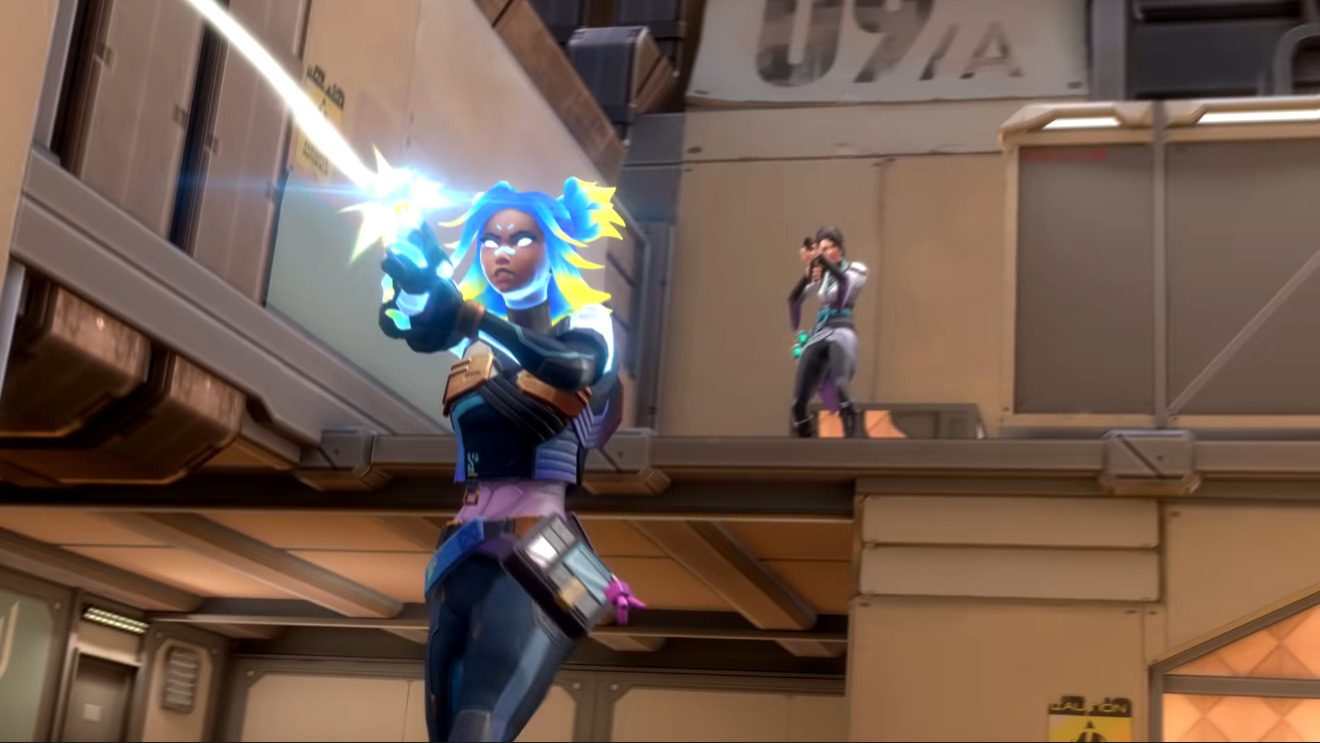 Despite her clarification on the term’s origin, Simon soon found herself receiving massive push back against its use.

“‘Representation matters’ they say, all the while imposing a word the Westerns invented upon us,” @KuroeDrawsStuff tweeted.

@EthuTaho was one of the few trying to inform Simon on her misstep.

“Do note that ‘Filipinx’ is only used in the States by Fil-Ams who misunderstood our own language and is viewed with actual disgust in the Philippines by Filipinos,” they wrote. “Just letting you know that you might only want to use it with Fil-Ams.”

@checkmateXD took umbrage with Ashley Simon’s motives for being respectful, asserting, “Yet you use Filipinx, a term hated by the community. Stop taking credit for representation.”

“There is no such thing as Filipinx, it shouldn’t exist,” tweeted @RowennJohn. “Tagalog and other Filipino dialects all have gender-neutral words and pronouns.”

Eventually, Simon deleted her initial tweet and offered an apology, telling her followers  “I sincerely apologize to those I’ve upset with my Neon Filipinx tweet. I have no problem admitting when I’m wrong.” 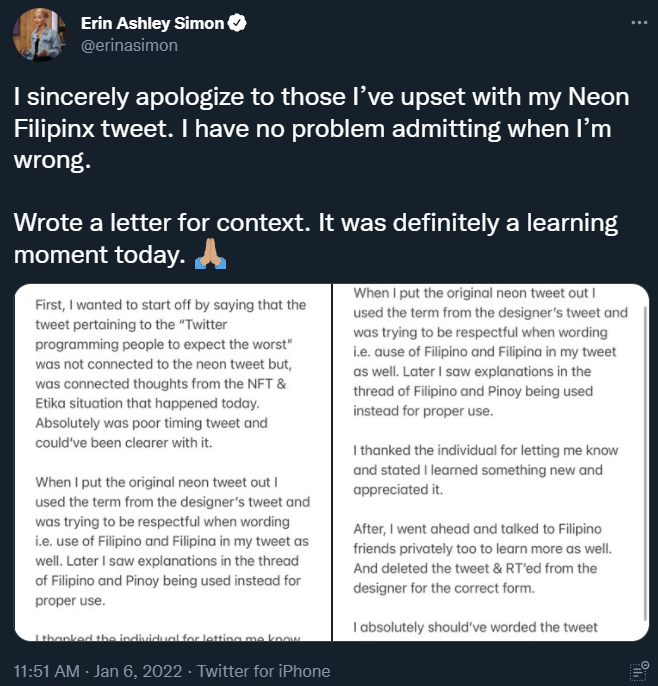 Posting a lengthier statement as a pair of images, Simon explained to players, “When I put the original neon tweet out I used the term from the designer’s tweet and was trying to be respectful when wording i.e. use of Filipino and Filipina in my tweet as well,” though she later “saw explanations in the thread of Filipino and Pinoy being used instead for proper use.”
I thanked the individual for letting me know and stated I learned something new and appreciated it.”

“After, I went ahead and talked to Filipino friends privately too to learn more as well,” she continued. “And deleted the tweet & RT’ed from the designer for the correct form. I absolutely should’ve worded the tweet differently and could’ve handled the situation better. But, I wanted to say my intentions were never malicious and I have no problem admitting when I’m wrong and sincerely apologize.” 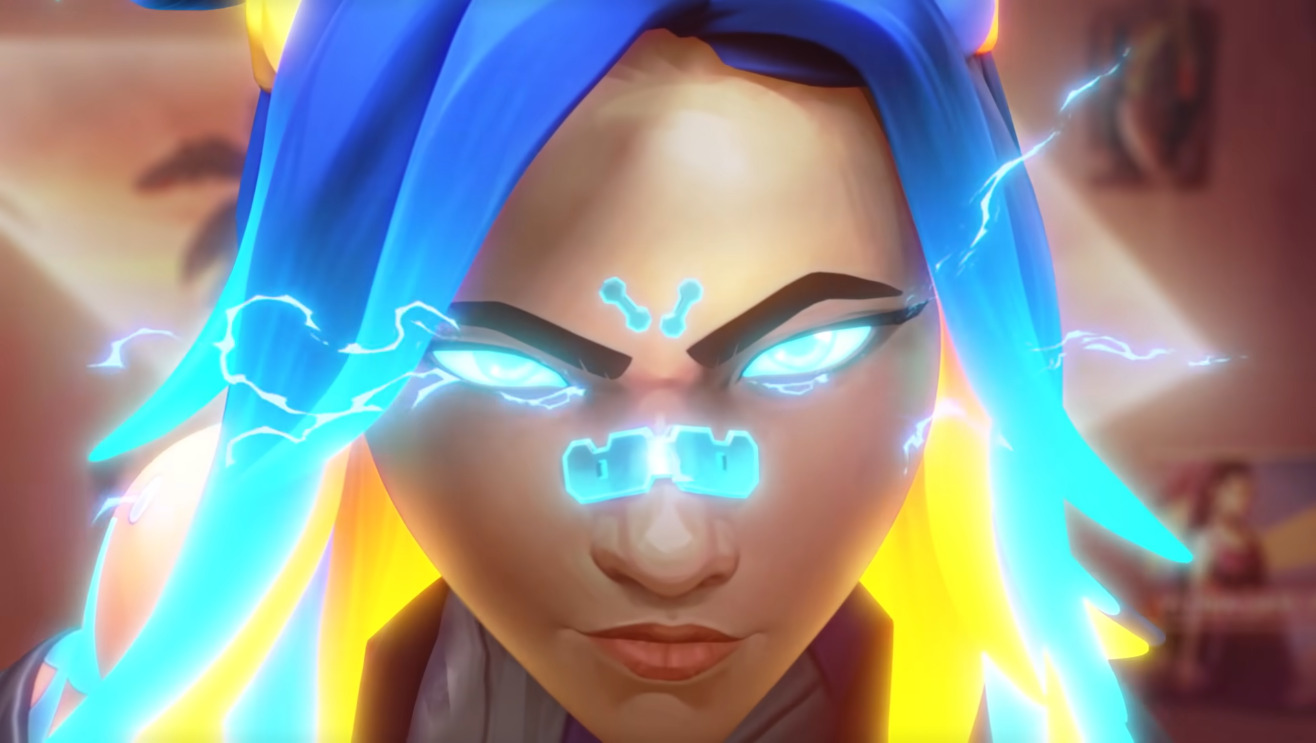 What do you make of the outcry against the use of the term ‘filipinix’? Should attempts to create gender-neutral terms be met with explanation on their flaws, or scorn?

Let us know your thoughts on social media and in the comments below!