Long-time Punisher writer and the creator of Nexus, Mike Baron, recently explained that his upcoming pro-police graphic novel Thin Blue Line is a direct response to the Antifa and Black Lives Matter riots of 2020.

Baron appeared on Fox & Friends on Sunday, where he discussed the book.

In the interview, Baron says, “Well, I always say, ‘I don’t choose my stories, my stories choose me.’ And like every one of you I was watching television during the long hot summer of 2020, when we saw talking news heads in front of cities that had been burned to the ground explaining they were mostly peaceful riots. And then politicians started to cry for defunding the police. ” 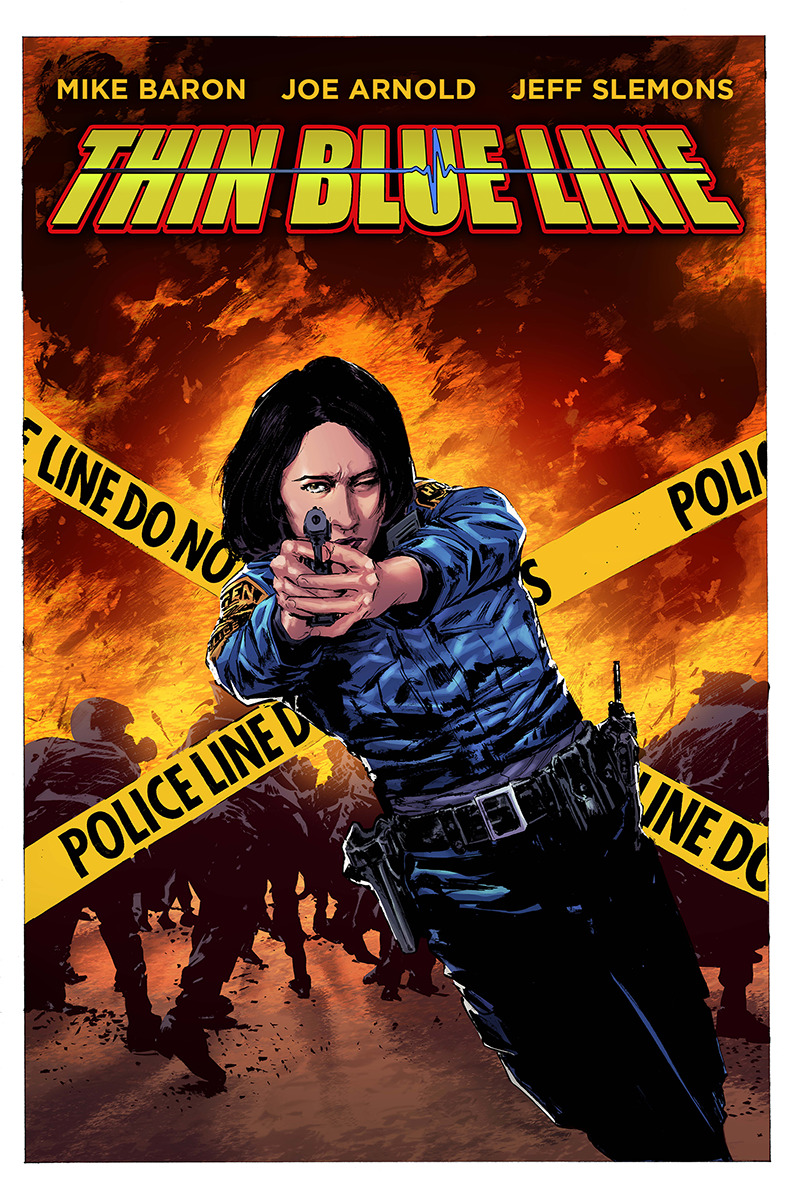 Turning to the graphic novel, Baron says, “Now, 20 years ago a story like this wouldn’t raise any eyebrows. But today, in today’s hyper-politicized environment, it’s proven to be quite controversial.”

“Because there are a lot of people out there who think they can replace the police with social workers. Well, that’s not true,” he explained. 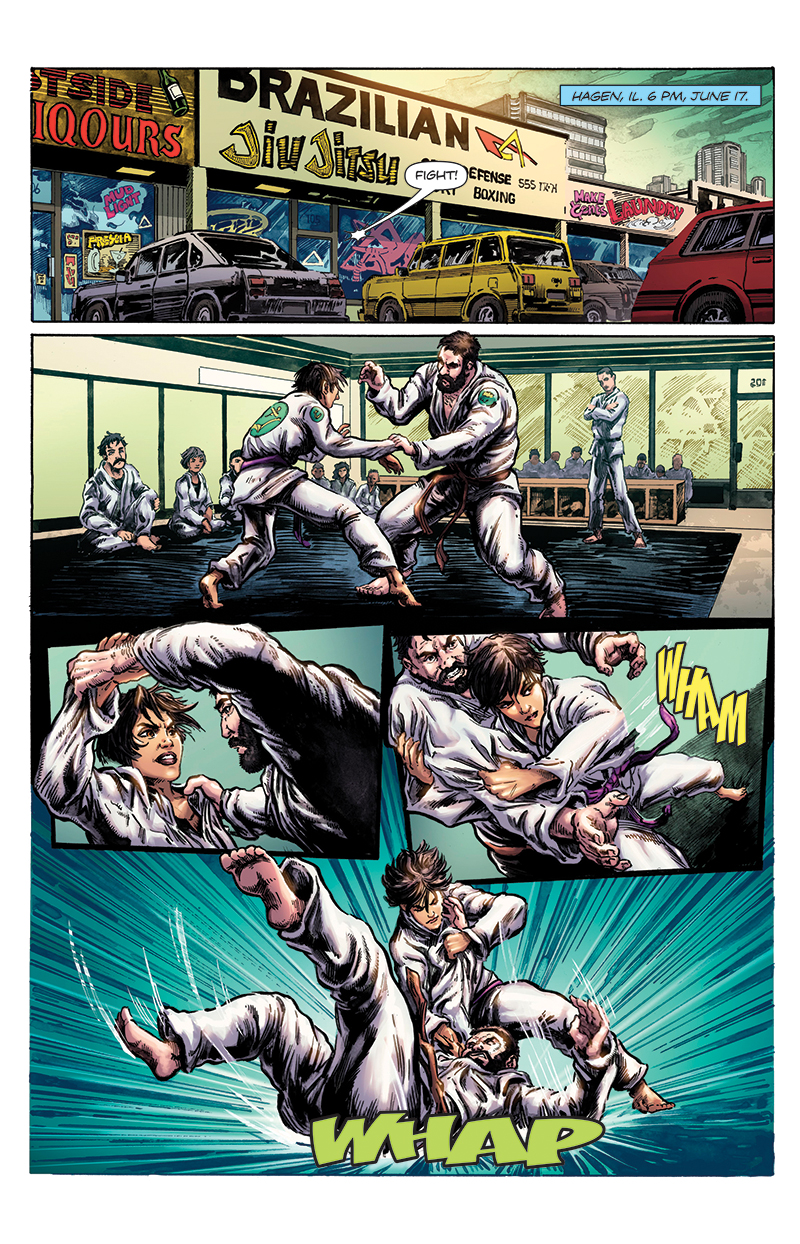 “We all know there are bad cops, but this isn’t about them,” he said. 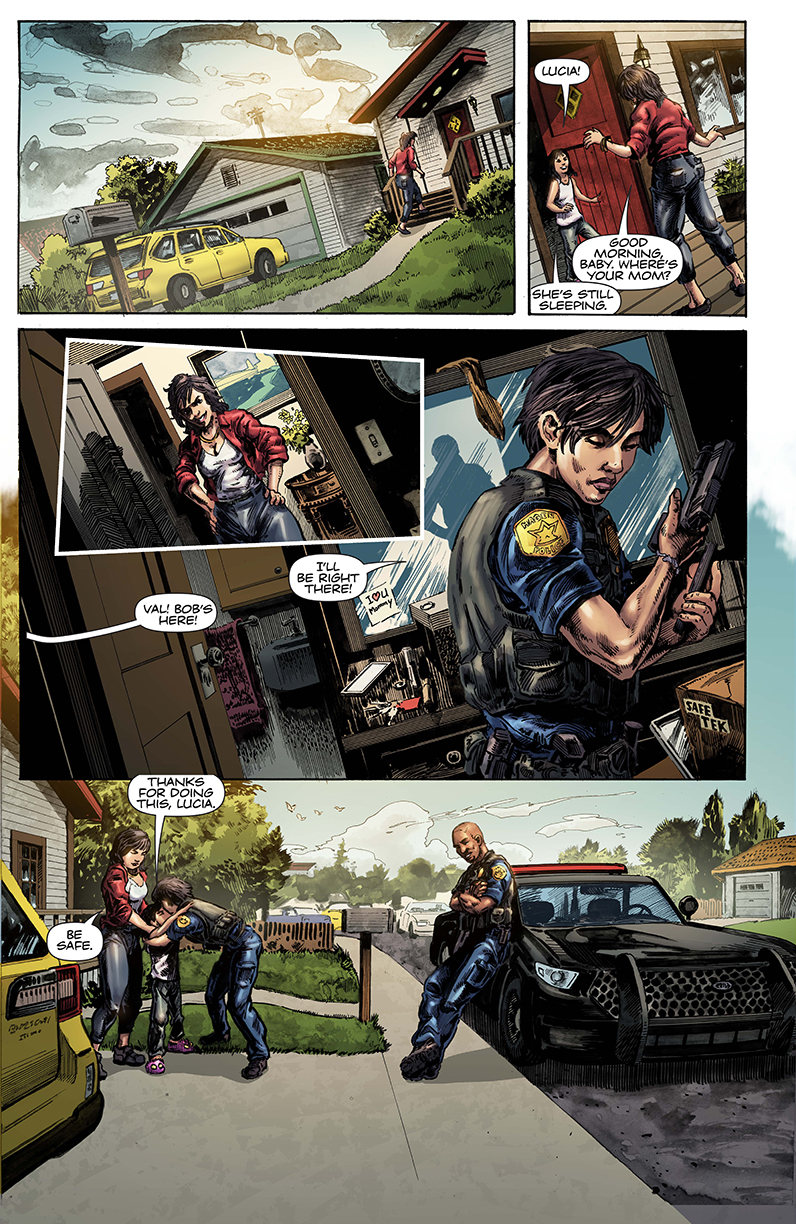 Baron then detailed, “The story practically wrote itself. And I have to emphasize, it’s not a lecture. It’s not didactic at all. It’s pure drama.”

“You are going to love it. It’s a great story. It’s going to grab you by the throat on the first page and you won’t be able to put it down until you finish it,” he declared.

The Punisher writer then went on to detail that the crowdfunding campaign is also supporting three different police charities including Adopt A Cop BJJ, National Law Enforcement Officers Memorial Fund, and The National Fallen Officer Foundation. 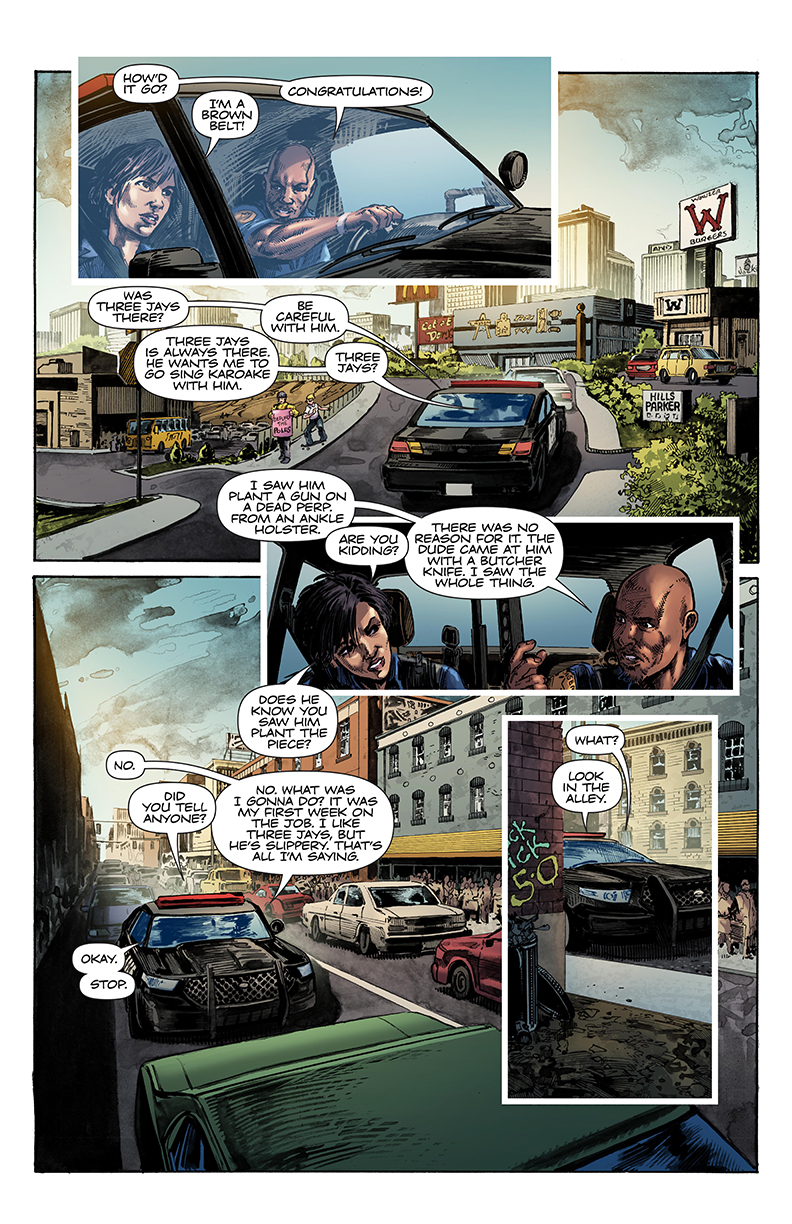 Baron then revealed that the book was rejected by numerous publishers, “We submitted it to every major publisher, and a number of others. The polite ones just gently passed, but the impolite ones, and they are some of the bigger publishers in the industry, their responses were vulgar and nasty. And we weren’t surprised.” 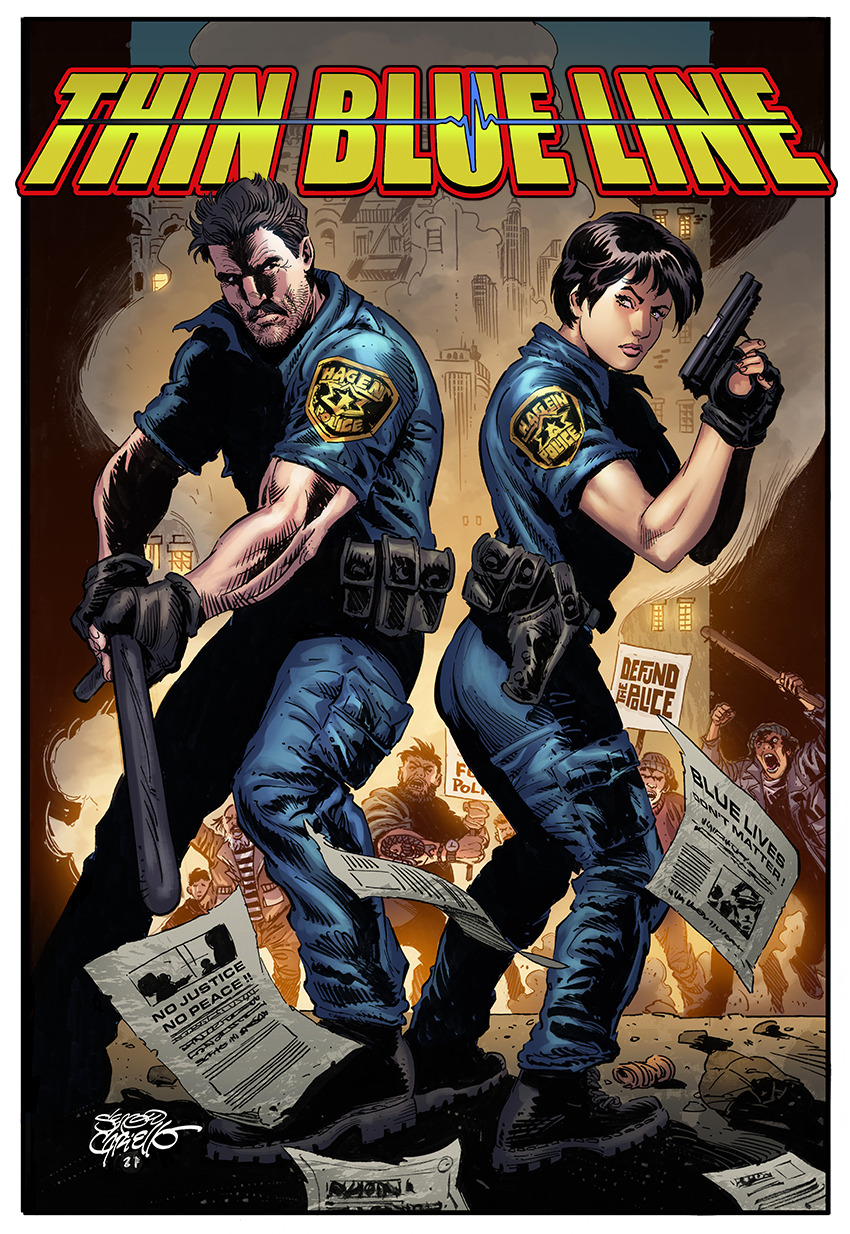 One publisher, Apex Comics out of the United Kingdom insinuated Baron was a racist for the title of the graphic novel. In a comment in a Facebook group, the publisher responded to Baron promoting the campaign writing, “Would never support this. It’s one thing to show cops, but the Blue Line has shown itself to be a racist movement that seeks to protect corrupt cops from justice and supports institutional racism.”

The publisher added, “Naming the book that suggests a lot about the writer and comic. So big no from me.” 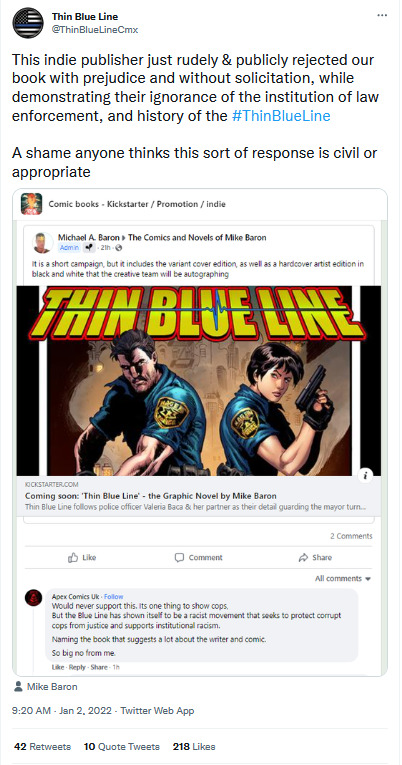 After implying that Baron is a racist, the publisher posted to their Facebook page claiming they were being harassed.

The publisher wrote, “So earlier today i made a comment on an award winning dc comics writers book, that i couldnt support a book about cops brutaly beating people. I drew attention to the name of the book ( which i wont share) and its racist connotations.”

“Just checked my inbox to find messages from all types of comic creators and youtubers insulting me. Telling me I will never make something so good and that I’m whats wrong with comics. Basically Comicsgate want to blackball my company,” Apex Comics wrote.

They concluded, “It is what it is. We dont want racist fans and we dont want to work with racists companies.” 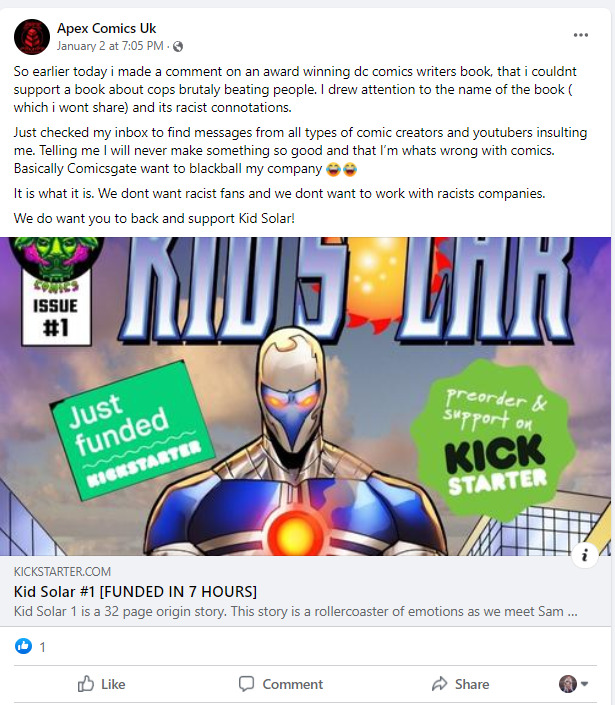 The official description for Thin Blue Line states, “In the middle of a long hot summer, a cop shoots a suspect and the incident makes the national news. Cities across the country quickly erupt into violence and well-organized activist groups mix in with opportunists and provocateurs who begin to riot, loot, burn — and kill!”

“Thin Blue Line  follows police officer Valeria Baca and her partner Bob Mack as their detail guarding the mayor turns into a fight for survival. Mobs burn down city hall, forcing the officers to improvise on the run, relying only on their training and wits as the mayor’s protestations and eagerness to placate the rioters prove fruitless,” it concludes. 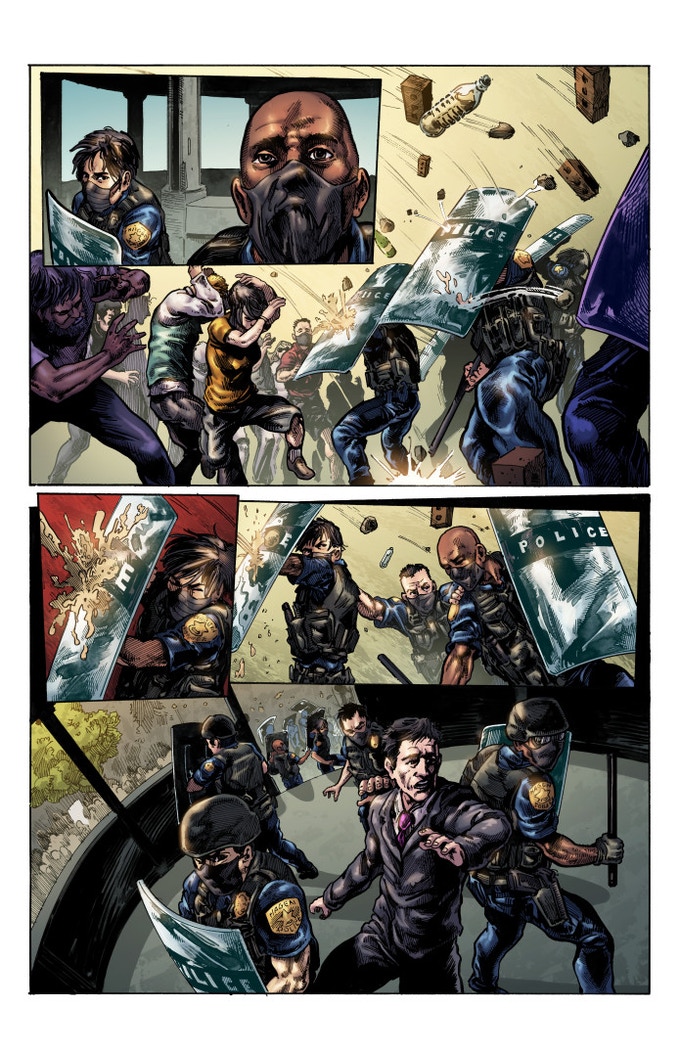 Do you plan on backing Thin Blue Line?