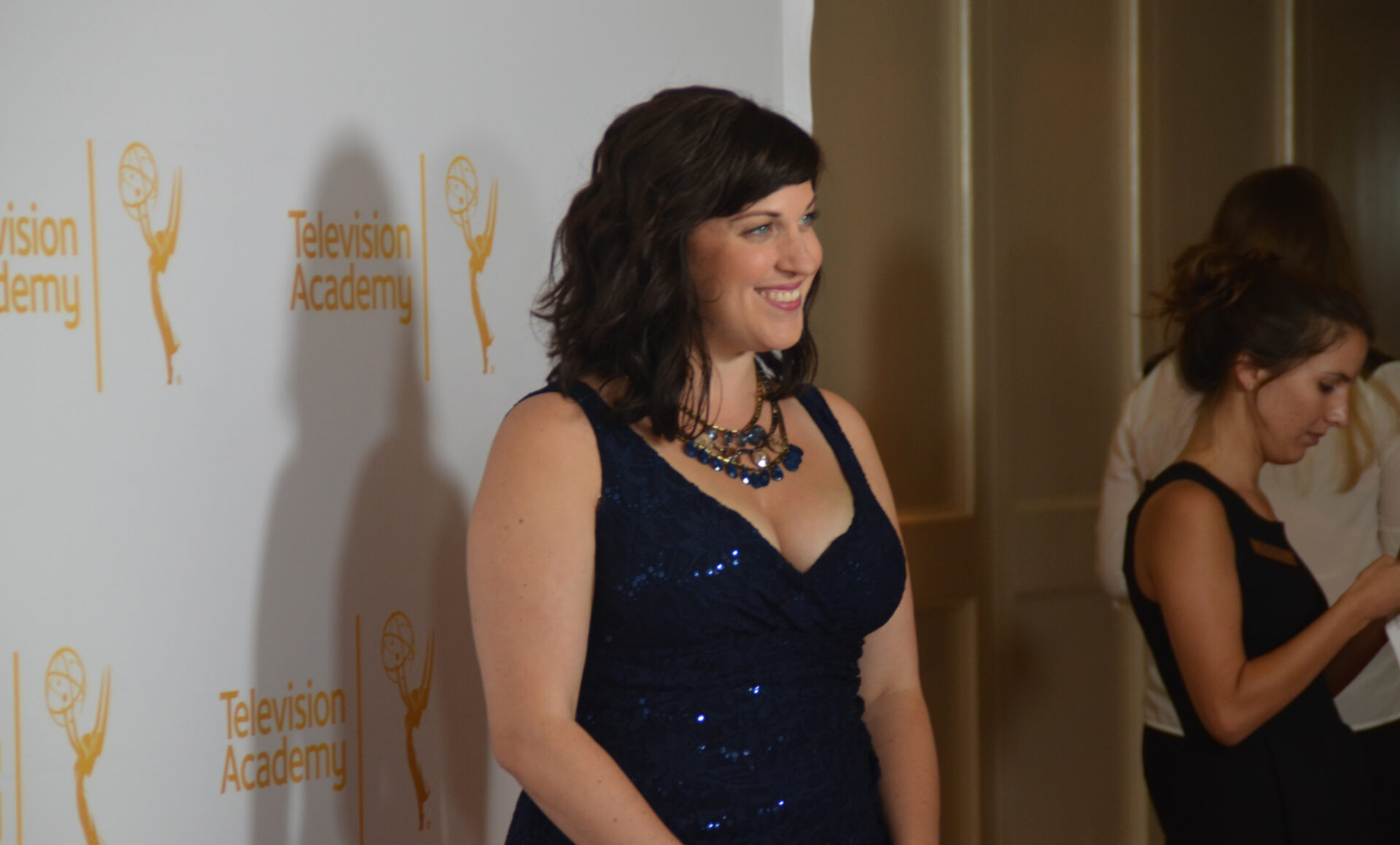 Tolman, who also plays Winnie McLendon in Gaslit, made her demands known on Twitter.

She tweeted, “Writers and showrunners- take the jokes about weight out of your scripts. I promise they aren’t funny. And even if they were, they won’t hold up well.”

“And even if they did, they’re unkind-either to your characters and actors or someone in your audience or crew. It’s not worth it,” she added. 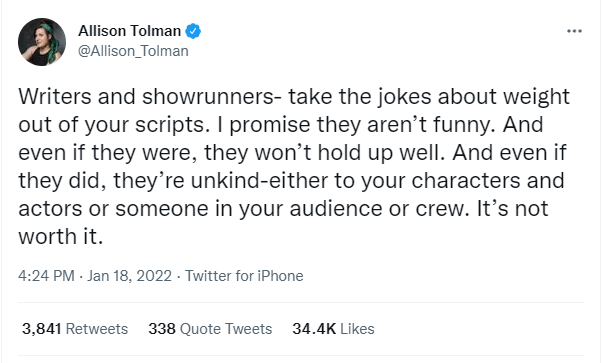 Tolman continued her thread detailing that she just doesn’t want jokes about weight removed, she has a laundry list of the types of jokes that should not be included.

In a subsequent tweet, she wrote, “Jokes about weight don’t have to just be jokes about a characters body. They can also include making mention of: the numbers on a scale, what someone eats, what size their clothing is, exercise and movement.” 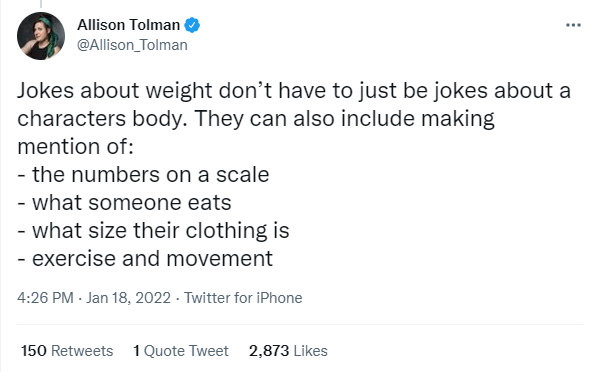 Next, she demanded that showrunners and writers remove body descriptions.

“And when you’re ready, begin to wrap your mind around removing body descriptors from your scripts altogether, including character descriptions and the names of minor roles,” she tweeted.

She went on to clarify, “I’m not saying you shouldn’t use adjectives. But please don’t say ‘Linda- the main character’s cousin, thin and witty’ unless there’s an actual reason Linda needs to be thin.” 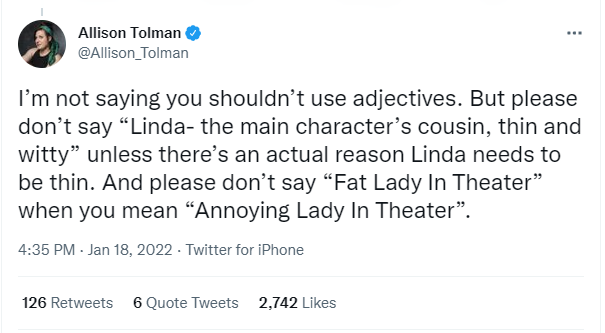 She then specifically took issue with descriptors for small bodies.

“Oh! And also, people think it’s okay if they’re using descriptors for small bodies, because they’re considered complimentary. Like, you’re auditioning for “Skinny Intern”, congratulations! But do you see THAT IS THE EXACT POINT AND SURELY YOU UNDERSTAND HOW WEIRD THAT IS,” she tweeted. 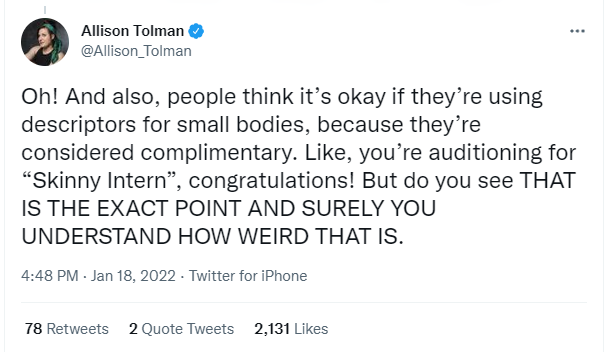 Finally, she concluded the thread writing, “The audience only knows the values you assign to different body types if you have characters saying lines about them. But the rest of your script? That’s your crew, writers room, everyone in the office, executives, creative partners- all the people helping you make your show.” 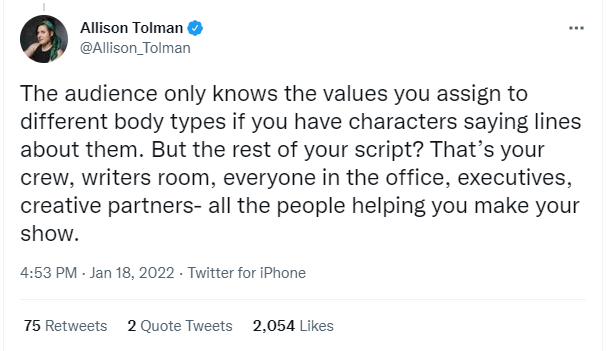 Interestingly, Tolman recently appeared in a featurette for the Paramount Plus series Why Women Kill, where she plays Alma Fillcot.

The featurette, while not cracking a joke about weight, specifically discusses the character’s fashion choices and the size of the dresses.

The show’s costume designer Janie Bryant states, “You know, a very significant thing in– also in the beginning, for your character was about these costumes being oversized, ill-fitting, really just almost like a sack in a way.”

“I mean, to all help play into the story of you really not being fulfilled, and just like, a very lonely person,” Bryant added. In fact, the featurette shows another character specifically telling her not to wear what she’s wearing.

One wonders if Tolman will be exiting her role as Alma Filcott given it now violates her public demands for Hollywood showrunners and writers by mentioning dress sizes.

Nevertheless, it looks like if Tolman gets her way Jim Gaffigan will be out of a job.

And it won’t just be Gaffigan. Gabriel “Fluffy” Iglesias will probably be out of a job as well.

On top of these stand-up comedians and actors being out of a job for their jokes about weight, almost all jokes will be off the table if we take Tolman’s logic and follow it to its logical conclusion.

If you can’t tell jokes about weight because they are unkind then you can’t really tell any kinds of jokes that might be unkind. That would more than likely include any and all jokes because it is likely someone, somewhere would find the joke unkind.

Aside from pretty much wanting all jokes banned, Tolman’s idea of removing body descriptors from characters is also absurd. Can you imagine applying this demand to Tolkien’s The Lord of the Rings.

In Tolkien’s prologue for The Lord of the Rings: The Fellowship of the Ring, he describes Hobbits, “For they are a little people, smaller than Dwarves: less stout and stocky, that is, even when they are not actually much shorter. Their height is variable, ranging between two and four feet of our measure. They seldom now reach three feet; but they have dwindled, they say, and in ancient days they were taller.”

Tolkien would not have been able to write that if he was creating his story for television in Hollywood today. It’s utterly ridiculous. 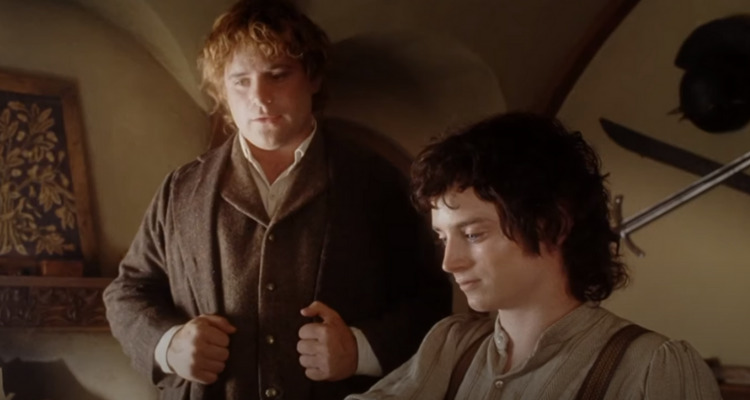 Tolman’s demands are idiotic. They should be completely ignored.

What do you make of her demands?

NEXT: Wil Wheaton Calls Dave Chappelle A “Bigot” And “Piece Of S***” After Netflix Announced The Comedian Will Headline ‘Netflix Is A Joke Festival’