According to the fan reactions to his reveal, the official introduction of Kamisato Ayato to Genshin Impact has failed to live up to expectations. 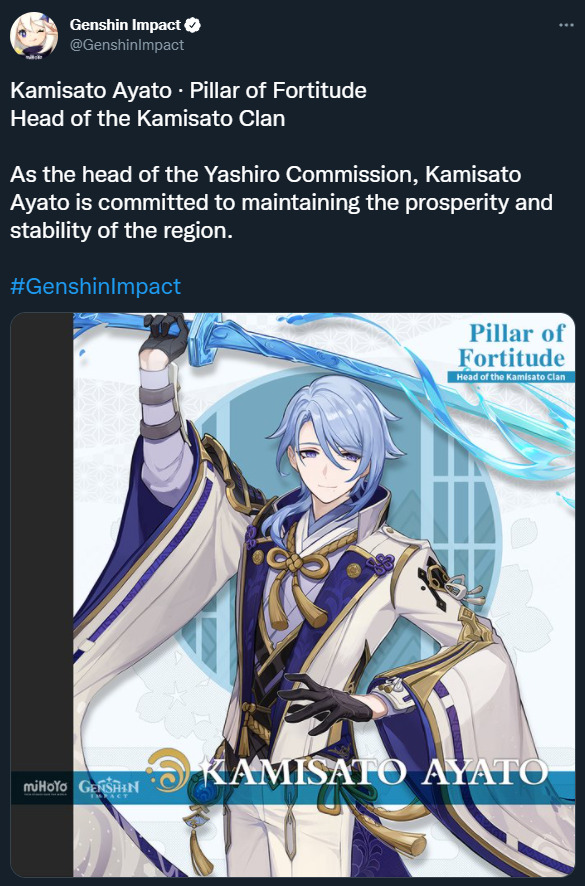 Revealed by miHoYo on February 4th alongside the content coming to to Version 2.5 and Yae Miko, Kamisato Ayato is a Hydro character and commander of the Yashiro Commission, a group charged with maintaining Inazuma’s shrines, festivals, and cultural events.

The Commission specifically serves under the Kamisato Clan, both of which were saved from ruin after Ayato rose to the head of the family.

Preferring to keep away from notoriety and deal with other bureaucratic heads, Ayato seems to want everyone – corrupt officials aside – to profit in negotiations. 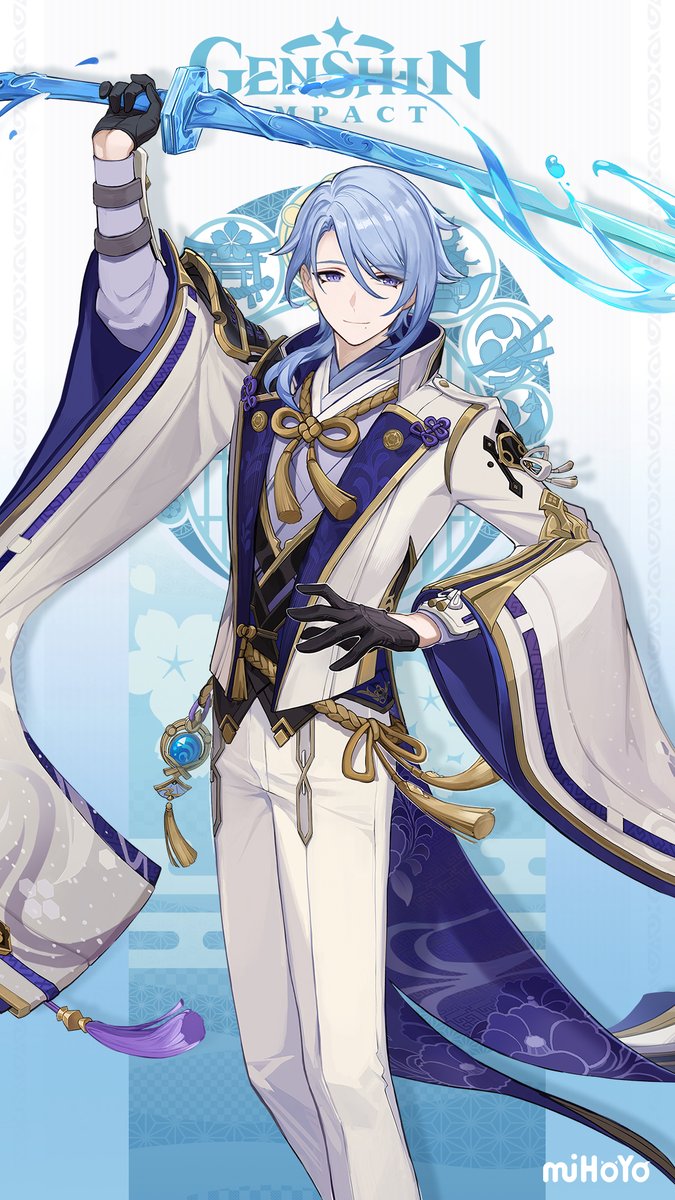 Praised for his cunning and rarely letting the stress of the job show, Ayato is also head of the Shuumatsuban. This organization of spies and ninjas help Inazuma run smoothly.

Ayato had been previously hinted at in trailers and in-game descriptions, leading fans to speculate what he would look like.

Fan art pre-dating the official reveal usually centered around him combining official-looking suits with a samurai-like appearance as seen in such as designs by artists including  @Betina_Mascenon: 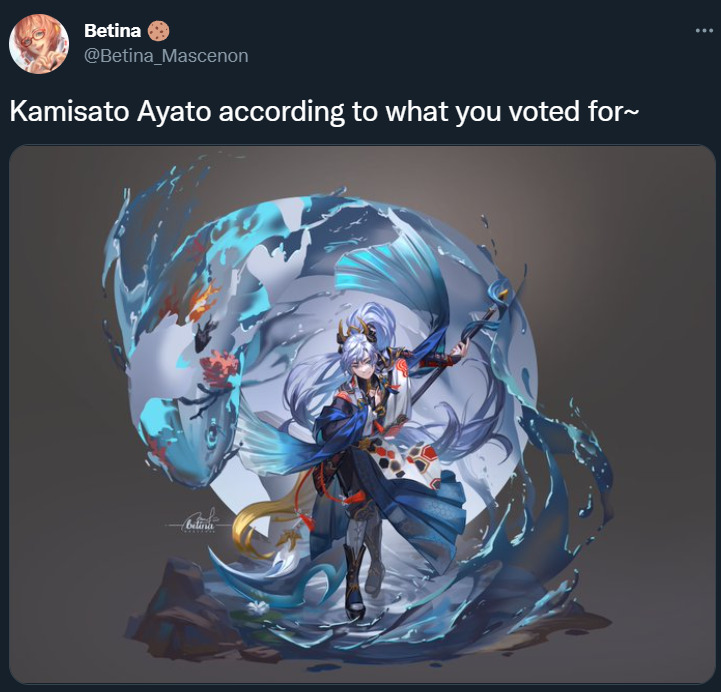 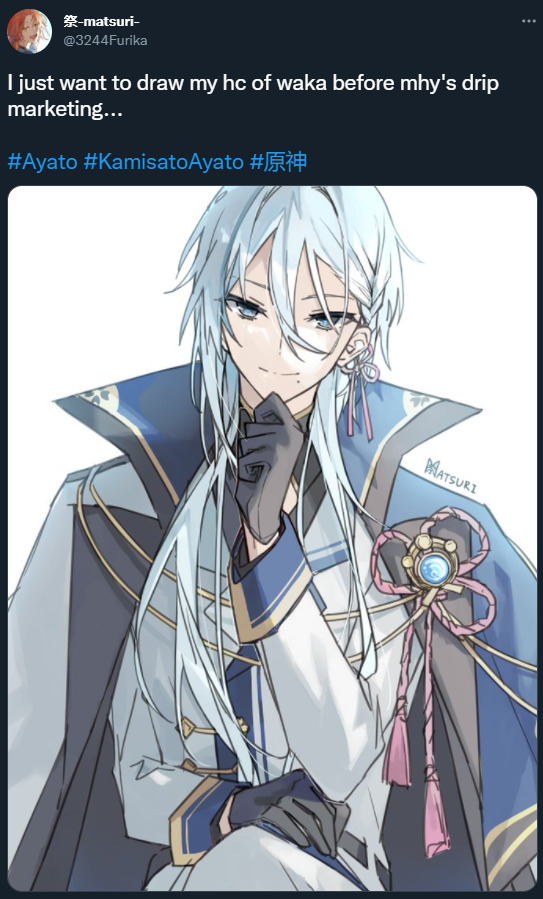 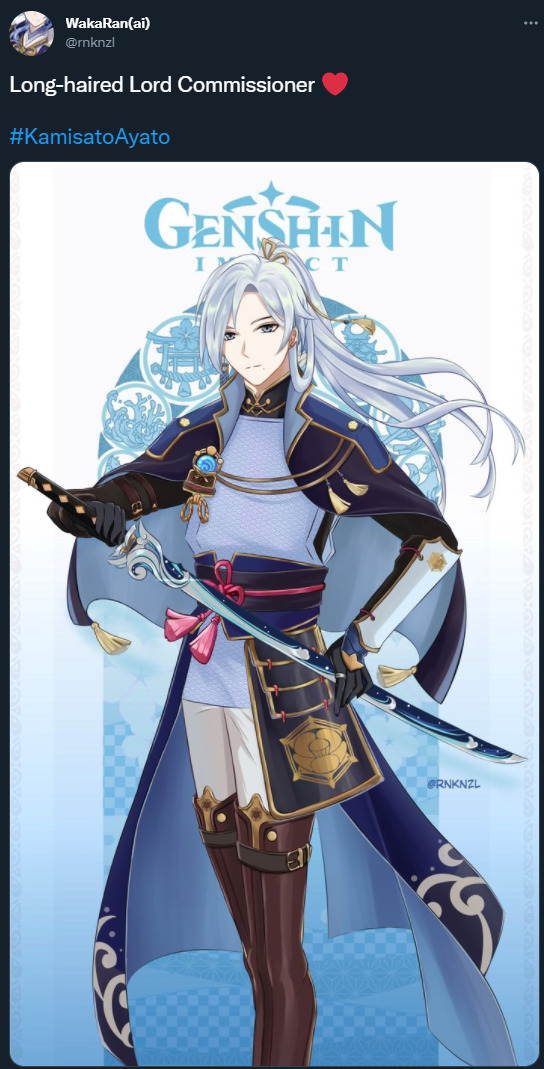 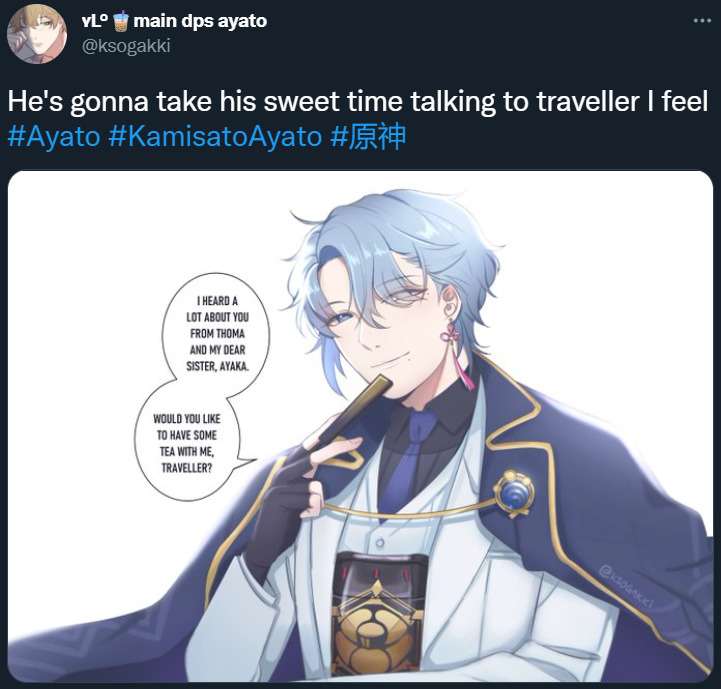 While a shot of the character speaking with his sister Ayaka from what would come to be revealed as an upcoming trailer leaked around January 29th, the character was only seen from a distance.

However, it seemed with the official reveal, fans were disappointed with the final design.

As noted by YouTuber Hero Hei, some were quick to compare Ayato to major NPC Baizhu, with many noting that while their hair is different in its exact shape, both have a similar face structure, and sport a longer hairstyle featuring a lengthier strand running down their respective shoulders.

Emergency Food merely tweeted “bruh” in reply to the official announcement, as they showed a side-by-side of both characters. 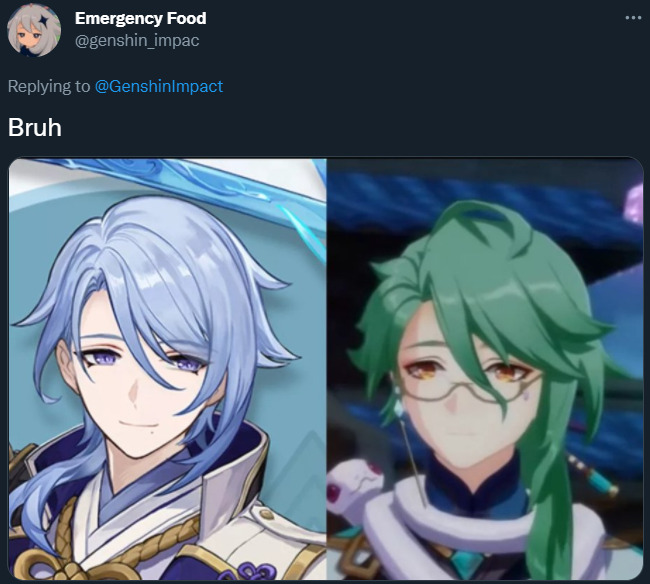 @Ningquangs made some small edits to Ayato to further drive home the comparison, revealing how adding glasses and change of hair and eye color can easily make Ayato look strikingly similar to Baizhu. 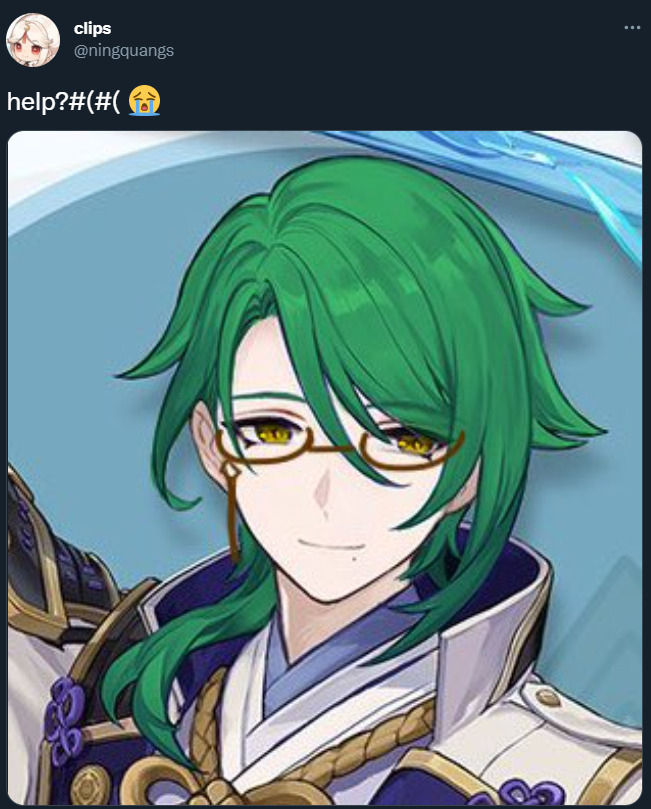 “I mean I feel a bit disappointed honestly,” tweeted SHIR0NN. “I mean he doesn’t look bad it’s just… why the fanart ideas of what he would look like look better tho.”

He continued, “I mean… why the fanart still looking better tho,” highlighting several pieces of fan-art that made Ayato look somewhat more mature, as well as an edited image of Ayato riding a subway train with Ayaka. 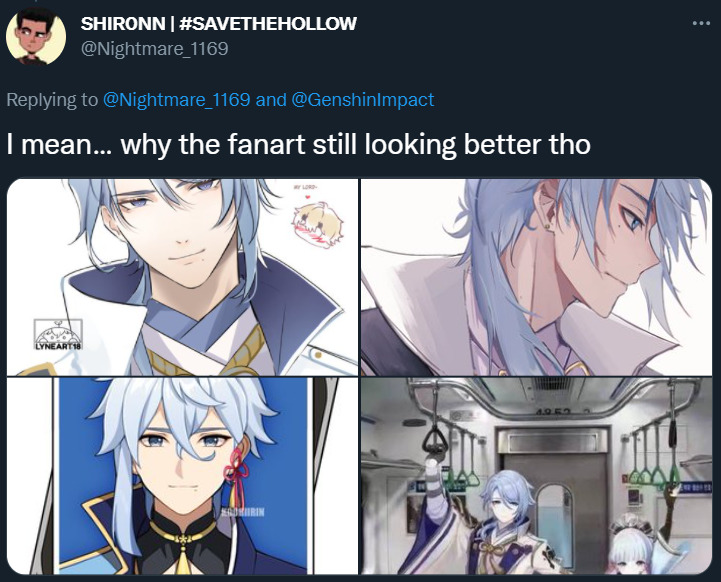 ZEL highlighted how even the smallest change can radically change how a character is perceived, turning up his smile.

“Not of fan of Ayato’s expression so I made him looks [sic] more sly,” they explained. 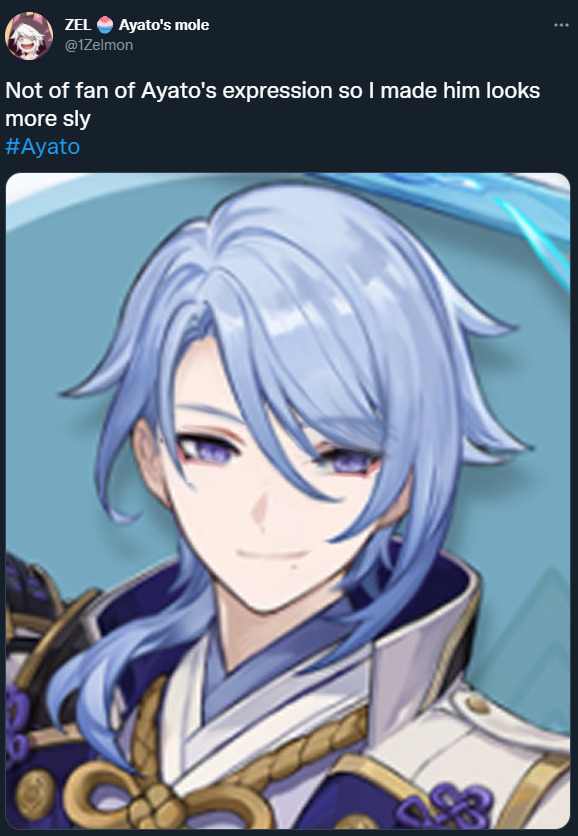 It seems the rough consensus is that while many like the character’s design, many were expecting him to not only be older and more masculine – rather than another entry in the category of “pretty boy” or Bishonen male characters – but possess something that makes him stand-out from the rest of the game’s cast.

“I think people are disappointed in Ayato’s design is mainly cuz Ayaka got the traditional Japanese Samurai aesthetics so we expected a similar design trope for #Ayato?” Rurisen tweeted, “but somehow MHY thinks western suits with sprinkles of Asian element is the way to go for husbandos.” 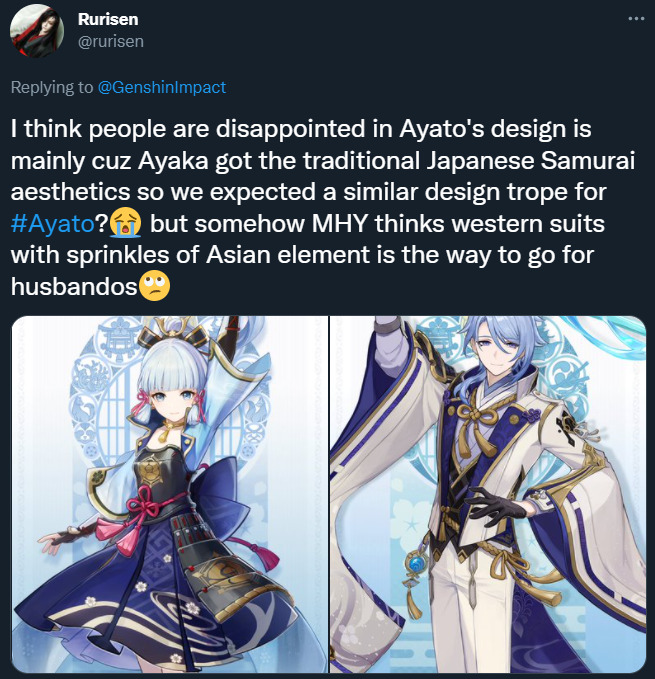 However, Rurisen’s reaction may only be found in Genshin Impact’s western fanbase.

As to why this sentiment seems to be exclusively Western, Japanese Twitter user Kagaribi_bunsyo, as translated by user PiyoPii and verified against a machine translation provided by Google Translate, authored a short-thread on the expctation of Ayaka to wear a more traditionally Japaneseoutfit. 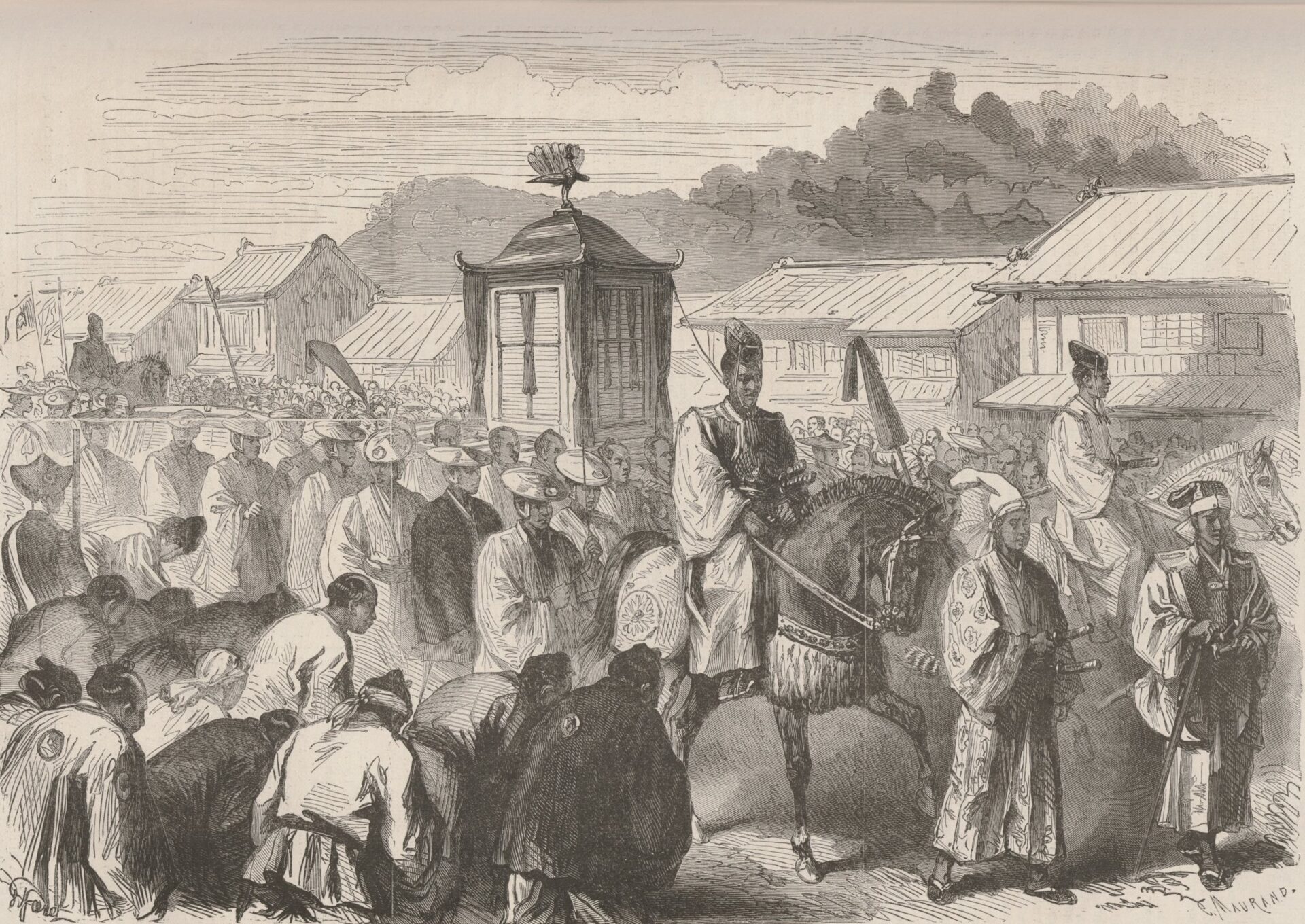 In summation, Kagarbibi explained that while over 200,000 people have felt Ayato’s outfit was “very strange,” it’s in fact inspired by Japan’s Meiji era.

Around the 1860s, Japan had become increasingly aware they were behind Western governments in terms of science, industry, and more.

As such, in 1868, Emperor Meiji began the Meiji Restoration, returning large amounts of political control to Japan’s emperor, and enacting dramatic changes across the country’s political and social structures – including the adoption of some Western ideals – to aid in their rapid industrialization.

Kagarbibi notes that the upper class were able to quicker adapt to such changes, such as the introduction of Western fashion. However, Japanese tailors were more used to making kinonos that were “one size fits all,” unlike the more specifically-tailored designs of Western clothes.

As some struggled to adapt to these new ideals, a fusion style of Japanese and Western clothing was invented, dubbed the Tonbi.

This style saw fashionistas wearing Western accessories such as hats, coats, and Western-style shoes on top of traditional Kimono fashion. 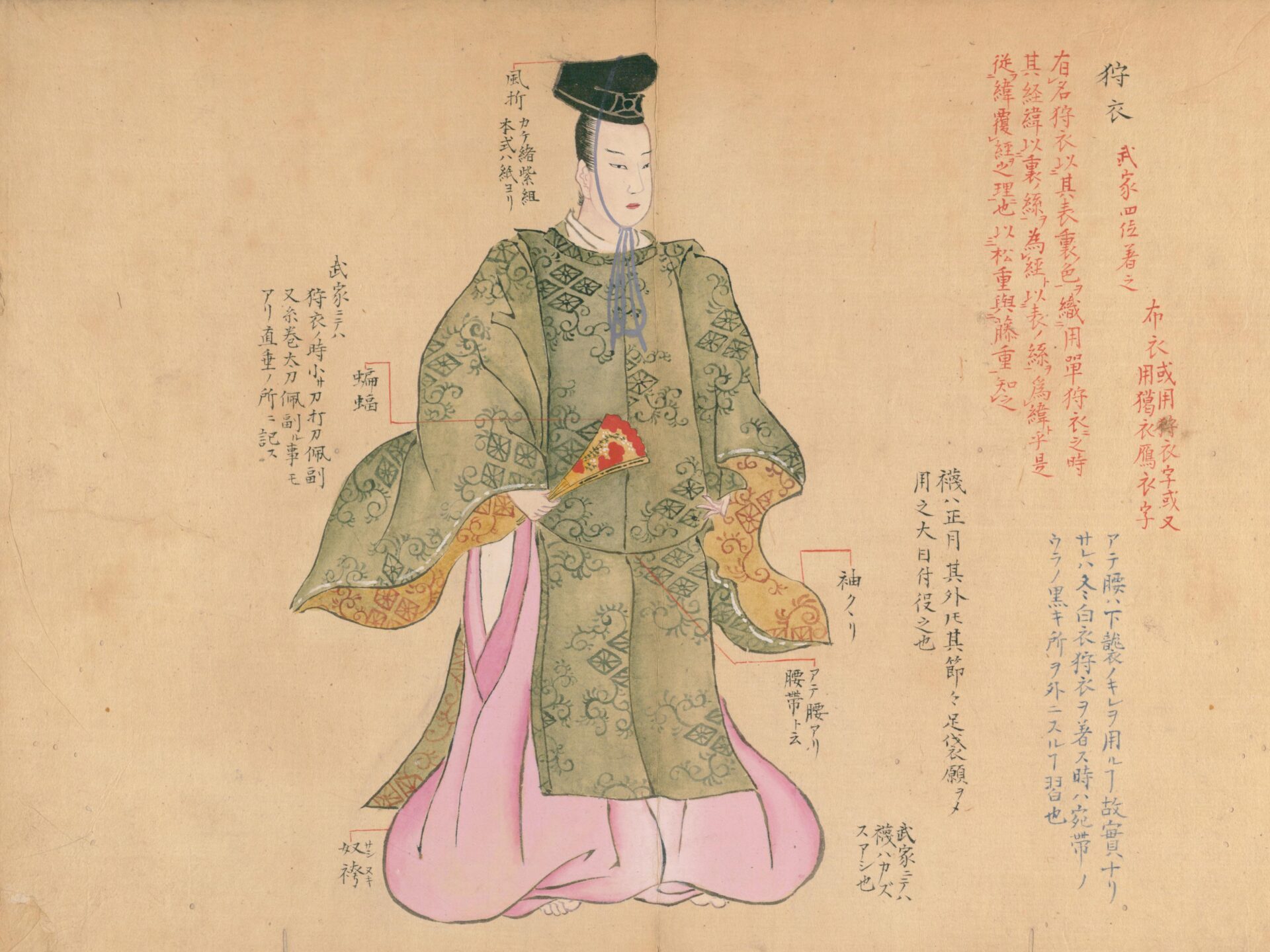 Kagarbibi praised miHoYo for their careful study of Japanese traditions and cultures, and was quick to push back against the idea that Ayato’s long sleeves were inspired by women’s kimonos, or Furisodes.

Rather, he elaborated, it’s inspired by the long sleeves of an aristocrats’ Kariginu, and the samurai’s Hitare.

In addition, Ayato’s sleeves have ribbons to tie up the whole kimono, something Furisode did not have. Furisode sleeves also reach a woman’s ankles, rather than up to the kees as Ayato’s kimono does. 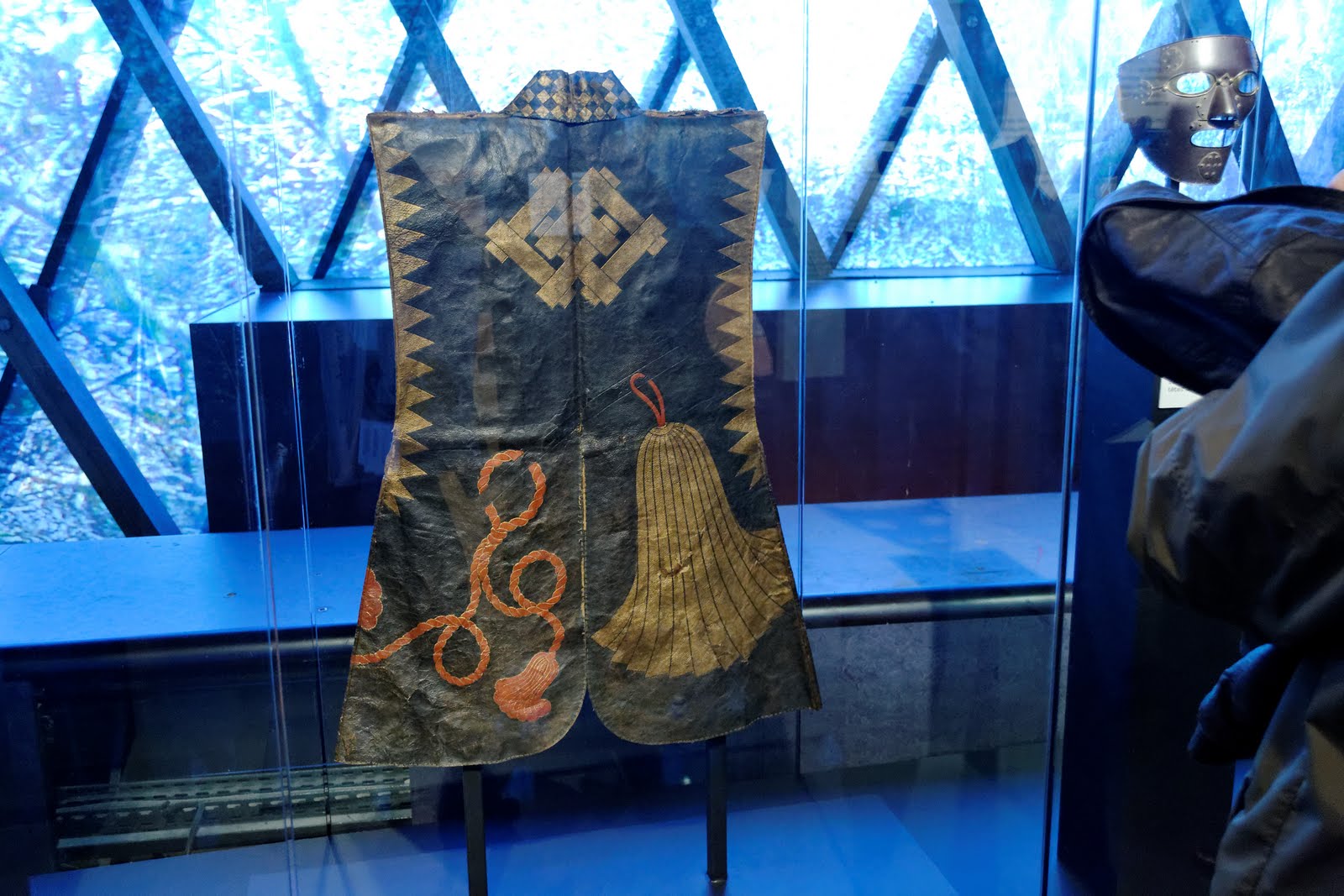 Ayato is also wearing a Jinbaori, essentially a samurai surcoat, though it also bears a resemblance to a Kariginu, an informal set of clothing worn by nobles, or a Hitatare, a specific outfit worn by upper class Samurai which later became formal wear when they began serving the imperial court in the early Meiji era.

This formal wear influence is further seen in Ayato’s outfit having tailcoats, which were worn in Meiji Era courts, and his clothes are clearly tailored to fit.

Ayato wearing multiple layers would also be considered stylish in the upper classes. The braids and strings are also inspired by those used to hold a samurai’s armor together and their swords close to their person.

What do you think of Kamisato Ayato’s design? Were its finer details lost on Western fans? Let us know on social media and in the comments below.