Increasingly popular YouTube tech alternative Rumble is putting its money where its mouth is regarding talent acquisition.

The company’s CEO Chris Pavlovski just offered podcasting mega-star Joe Rogan a $100 million dollar deal to jump on to their platform. This offer comes in the wake of a Spotify debacle involving prominent Leftists attempting to de-platform the star. 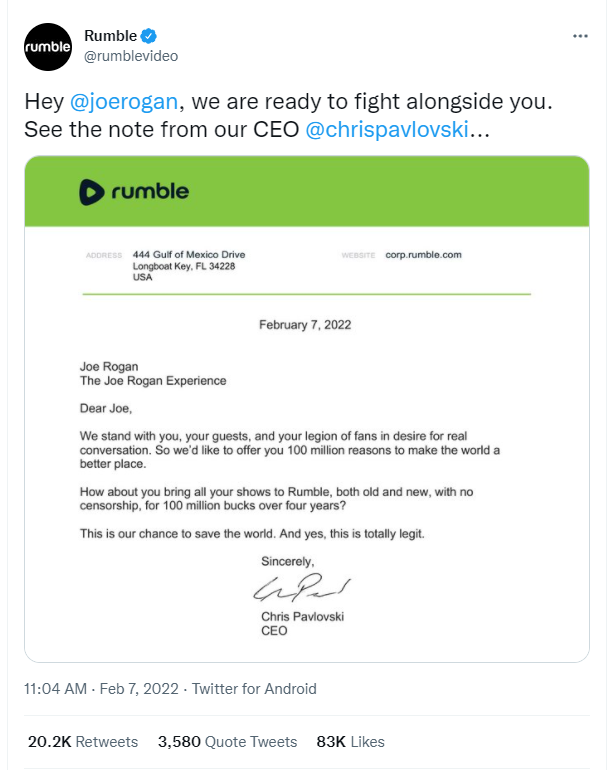 Spotify’s troubles began when anti-Rogan advocates began falsely accusing the podcaster of racism and Covid-19 vaccine misinformation, prompting a three-way tug of war between company execs, far-Left celebrities like Neil Young, and Spotify’s own divided user base. With approximately 11 million listeners that tune in to his show on a regular basis, Rogan is a powerful force in media.

Now, it seems like Spotify is starting to crumble under the pressure of Woke ideologues attempting to censor and suppress another individual they don’t like. Rather than stick to their guns, Spotify has instead struck dozens of Rogan’s past episodes from his catalog, while simultaneously proclaiming that “user safety” would be a major priority moving forward. 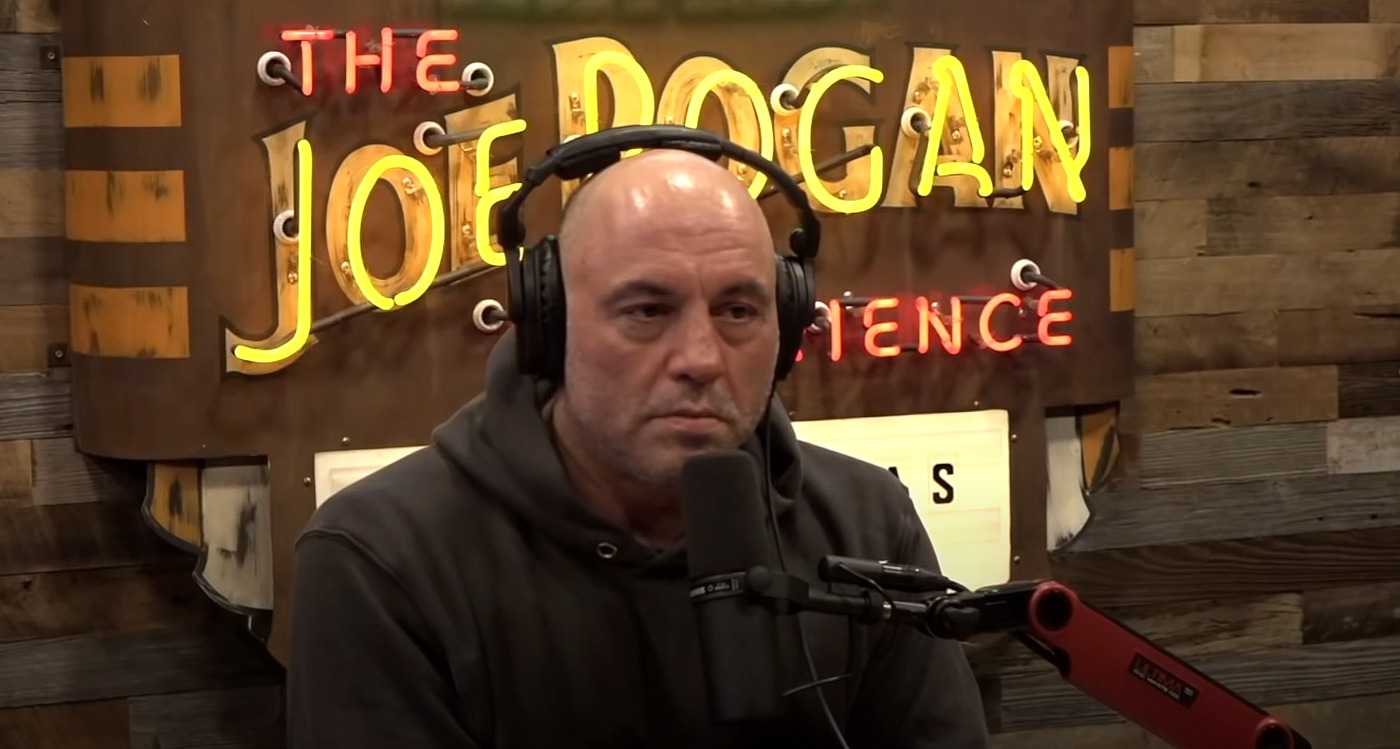 In short, cancel culture is forcing yet another corporation to turn its belly up and surrender, while at the same time constructing ideological no-fly zones that cater to the whims and demands of a hostile and totalitarian Leftist establishment.

Pavlovski’s offer to Rogan is an intriguing one, though the chances of Rogan leaving Spotify at this time are somewhat slim. In theory, Rogan would have to refuse to bow down to Spotify’s demands, at which point the company would fire him, rather than face an even stronger cancelling wave from advocates on the Left.

If that happens, Rogan would probably nab quite a hefty payout, and simply take his business elsewhere. Spotify does not produce the Joe Rogan Experience podcast series, instead enjoying exclusive broadcasting rights. The tossing of Rumble’s hat into the ring is a signal that alternative tech platforms are ready to capitalize on corporate cowardice. 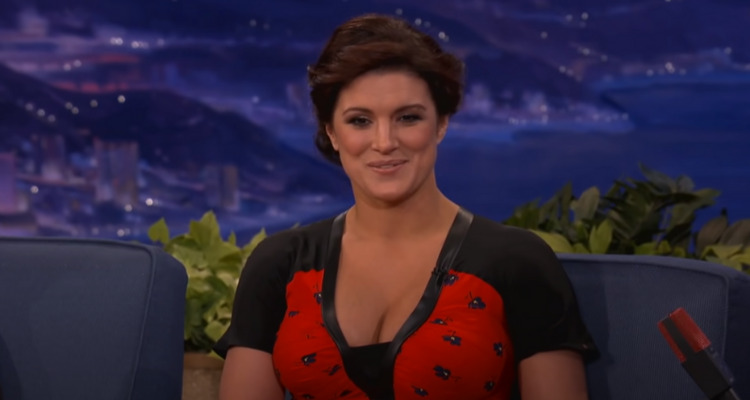 This is nothing new. It began largely when actress Gina Carano was fired from the set of Disney’s The Mandalorian, at which point conservative media outlet The Daily Wire immediately picked her up and offered her a movie deal. With the overwhelming majority of the country reportedly sick of cancel culture, this trend will grow.

If Rogan were to jump ship to Rumble, it would have massive ramifications that would significantly shift the balance of media power in the other direction. This is one of the reasons why embattled and disgraced outlets like CNN and MSNBC, who’s ratings have tanked, want nothing more than to see Rogan banished into non-existence.

However, Rogan’s following dwarfs these networks combined, and has helped signal a massive shift in public opinion over access to – and consumption of – information. Trust in media is at an all-time low, which is why the public has taken largely to alternative sources, one of which is The Joe Rogan Experience. 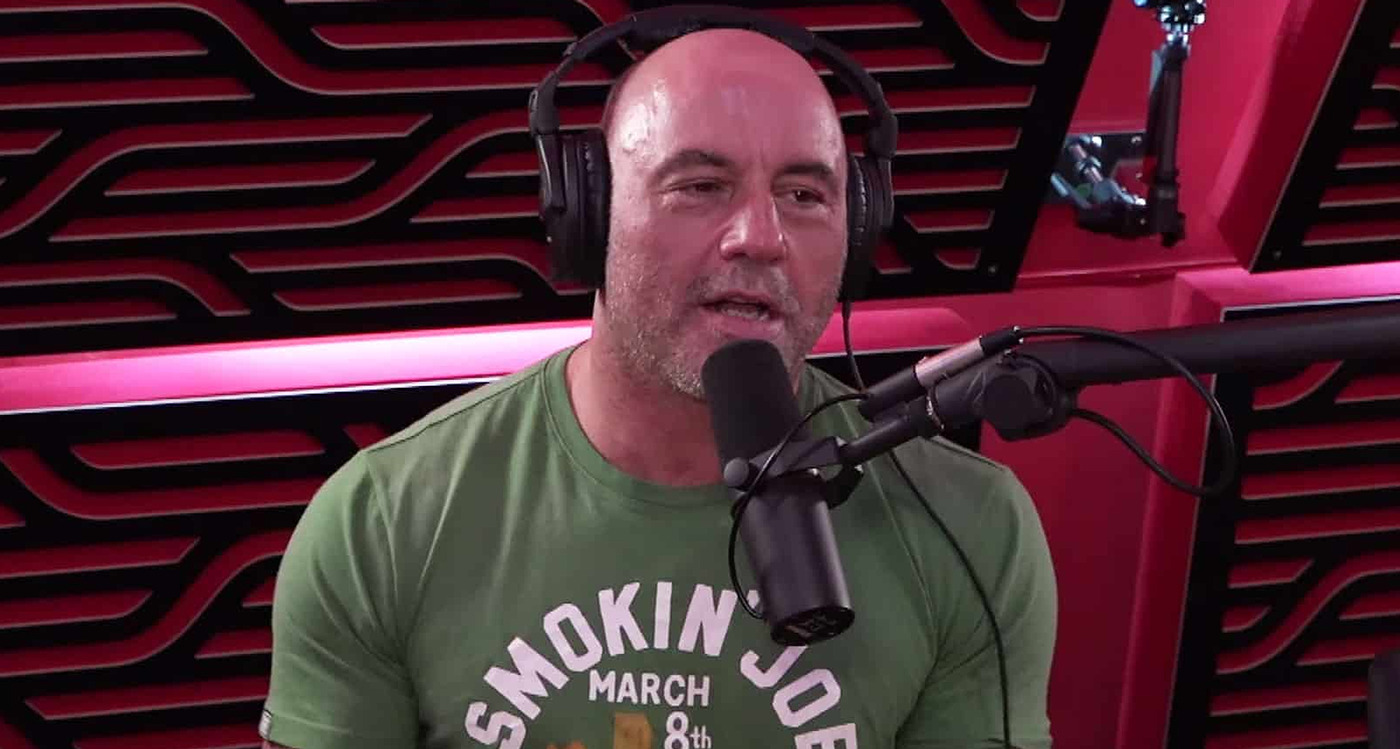 It’s doubtful the deal will ever see the light of day, but stranger things have happened. Regardless, the act of de-platforming any voice that does not parrot the religious orthodoxy of the extreme-radical Left will only serve to embolden and strengthen its own adversaries, which is a good thing.

Joe Rogan recently made a boo-boo when he issued a public apology over a Leftist compendium hit piece featuring the celebrity using the N-word over the course of the years. However, Rogan’s use of the word fell within the context of quoting other sources, including rap lyrics, which feature the racial slur prominently.

Rather than apologize to the mob (which is akin to throwing chum into a shark tank), Rogan should have simply explained that his use of the word was contextual, as opposed to antagonistic, and simply left it at that. Now, both he and Spotify CEO Daniel Ek have given the Left the incentive they need to press the attack.

The attempt to paint Rogan as a racist is a transparent farce, and it speaks to the hypocrisy of a Leftist establishment that would never think of throwing the same amount of shade at say, current U.S. President Joe Biden, who also uttered the N-word in the past, in similar circumstances.

Rumble paints itself as a free speech platform, which is a slightly dubious label. However, it’s safe to say that Joe Rogan would not face even a fraction of the ridiculous censorship and suppression being pushed by large corporate behemoths in the back pocket of the Democratic Party.

2022 will continue to be a pivotal year for the culture wars, with more and more people realizing that the Left are not, in fact, interested in fighting racism, bigotry or whatever-phobia, and are instead focused on browbeating their opponents into silence, all for the sake of a power grab. 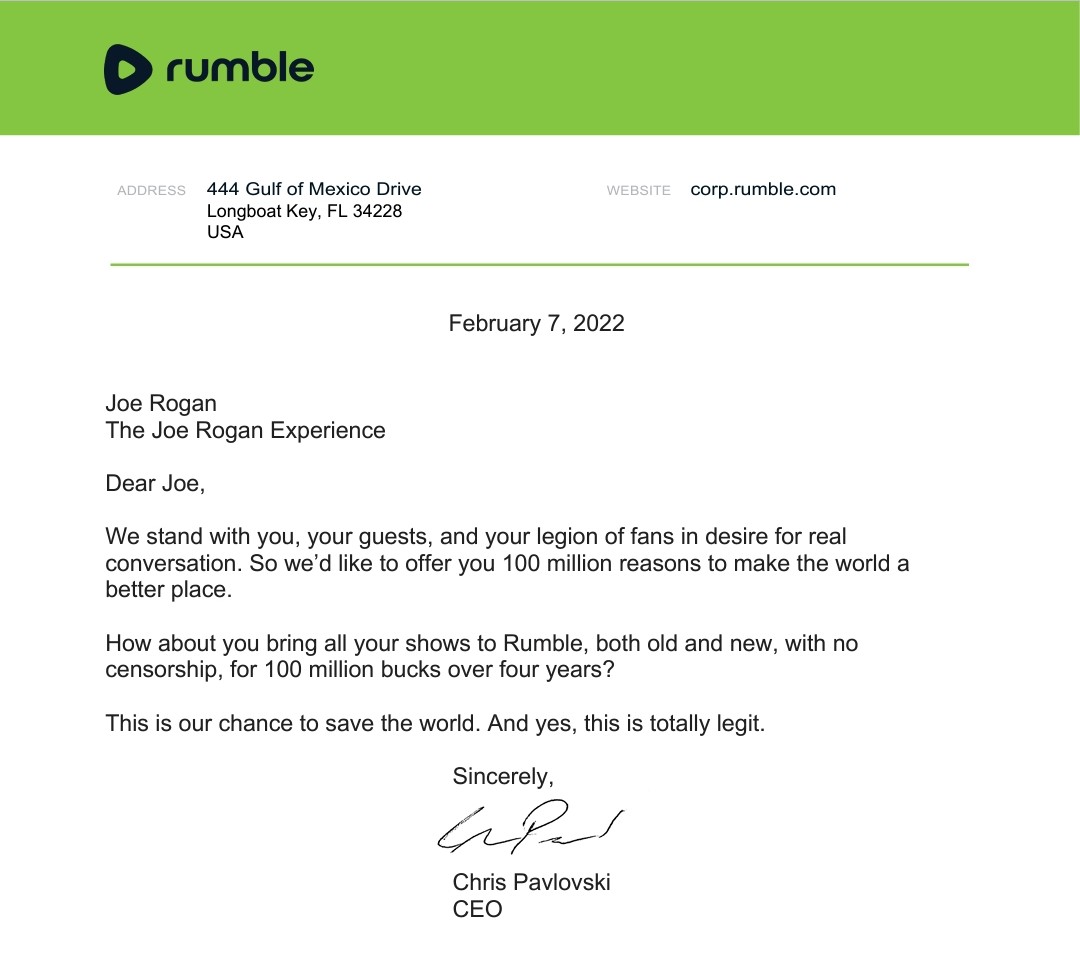 With companies like Rumble gaining new users every day, while tossing out $100 million dollar deals to highly influential cultural voices, it’s safe to say that the Left no longer have the same stranglehold on information that they had even six months ago.

Expect that trend to continue, especially after the midterm elections in November, which are predicted to skunk Democrats and shift the angle of political discussion in the country.

NEXT: Joe Biden’s Surgeon General Suggests Joe Rogan’s Podcast Should Be Censored “To Reduce The Spread Of Misinformation” About COVID-19