Denis Villeneuve’s Dune is one of the most popular movies of 2021 after being put on hold several times by pandemic-related lockdowns.

It was received fairly well by audiences and critics (including this one) and managed to thrive at the box office despite a simultaneous release on HBO Max that allowed for the convenience of enjoying the film and sitting at home.

Villeneuve shared his gratitude via the official Twitter page for his film, offering a long statement that in all says simply “Thank you” on behalf of everyone involved in the production. 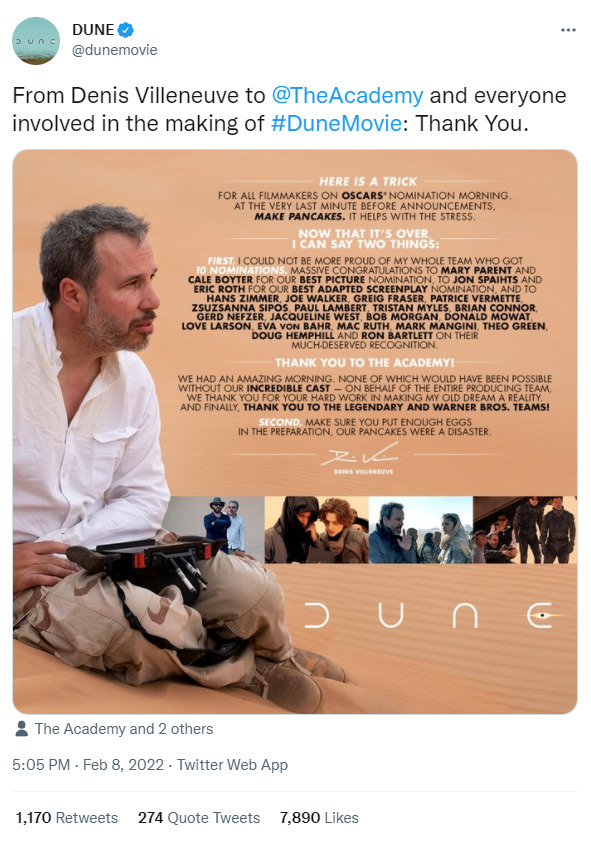 But despite all those nominations, there is one notable omission and that is Best Director which is a category Villeneuve could very well have won as it should’ve been natural to give him the nod.

The internet isn’t the only observer taking notice of this. A VIP in the discussion, Josh Brolin, who played Gurney Halleck in Dune certainly noticed and he isn’t letting it slide either.

In an Instagram video, he shared his surprise at the snub and called it “dumb,” among other things. “It’s just one of those things that you just go, ‘Huh? What?!’” Brolin said.

“I don’t know how you get 10 nominations and then the guy who’s done the impossible with that book doesn’t get nominated,” he added.

“It makes you realize that it’s all amazing and then it’s all f-ing totally dumb,” Brolin continued. “So, congratulations for the amazing accomplishments that these incredibly talented people have been acknowledged for, because it’s all really, really dumb.”

The Best Director nominees are set and they are Kenneth Branagh for Belfast, Ryusuke Hamaguchi for Drive My Car, Paul Thomas Anderson for Licorice Pizza, Jane Campion for The Power of the Dog, and Steven Spielberg for the failure that is West Side Story.

Unfortunately, it’s too late and Brolin’s words will probably do nothing to sway the Academy anyway.