In what may be the most ironic outrage in recent times, a number of Western video game localizers have taken issue with River City Girls Zero’s inclusion of a more literal English translation alongside one which takes more ‘creative liberties,’ claiming that such an option disrespects their work. 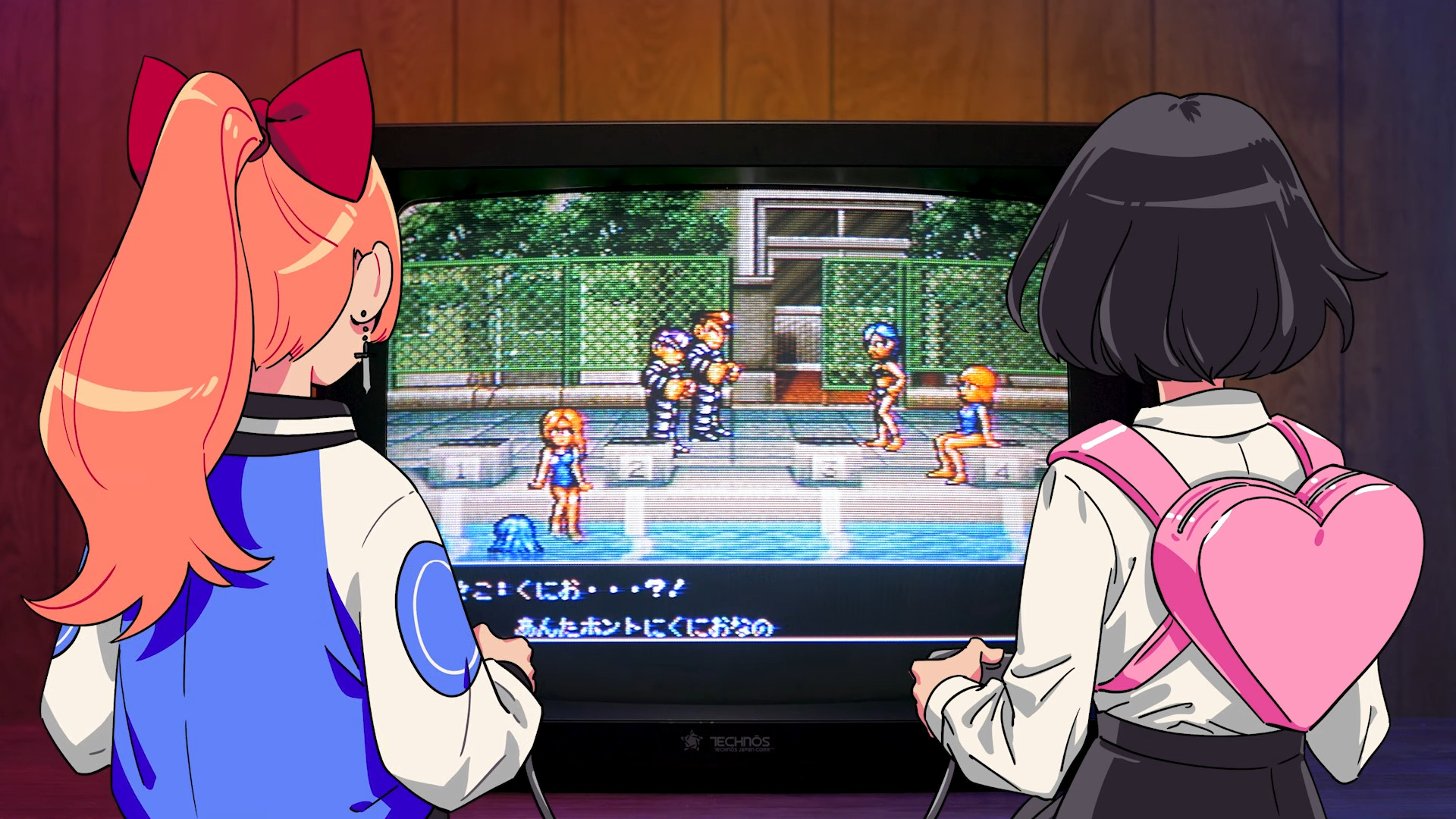 A remastered port of the fourth game in the long-running Kunio-kun beat-em-up series developed by WayForward, River City Girls Zero follows the story of Kunio and Riki, two high school students with a penchant for brawling, who find themselves framed for a hit-and-run accident they did not commit.

Breaking out of prison, Kunio and Riki set out to fight and kick their way to the truth behind the frame-job, enlisting their girlfriends Misako and Kyōko – the titular River City Girls – to join the fight along the way. 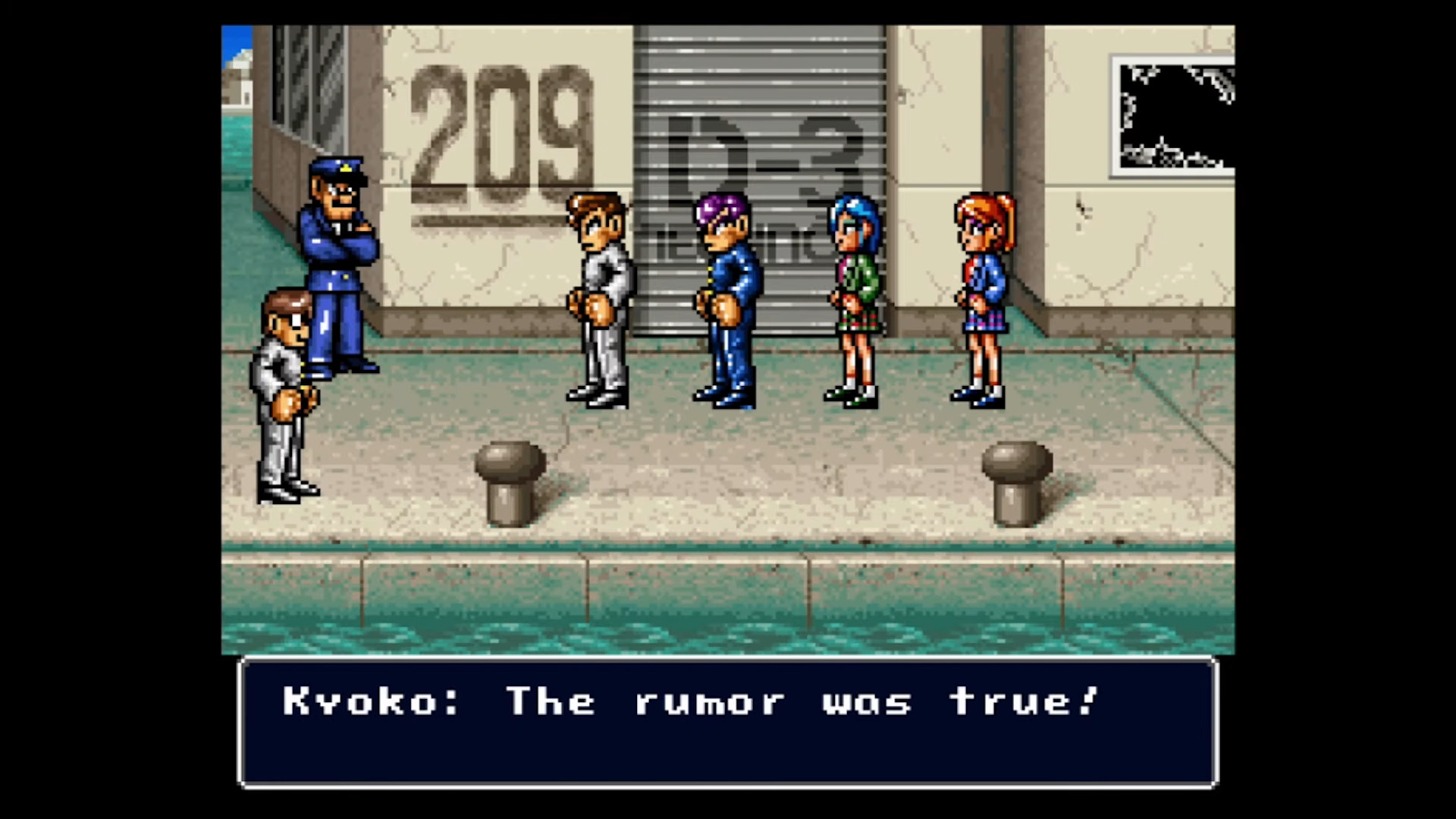 Aside from providing background on the River City Girls to players who have come to know the franchise through their eponymous title, River City Girls Zero also marks the first time this particular title – The New Hot-Blooded Tough Guy: The Elegy of Kunio and Co. – has been released outside of Japan in any form.

Additionally, as confirmed by WayForward on the day of the game’s release, River City Girls Zero also features two separate English translations: a “new” translation which “has the characters speak a bit more like they did in RCG1,” and a “literal” one that provides “as direct a translation as possible!”

Notably, given the change in their personalities in River City Girls, these translations were included to provide players a way to experience the game with either Misako and Kyōko’s original personalities or their updated characterizations. 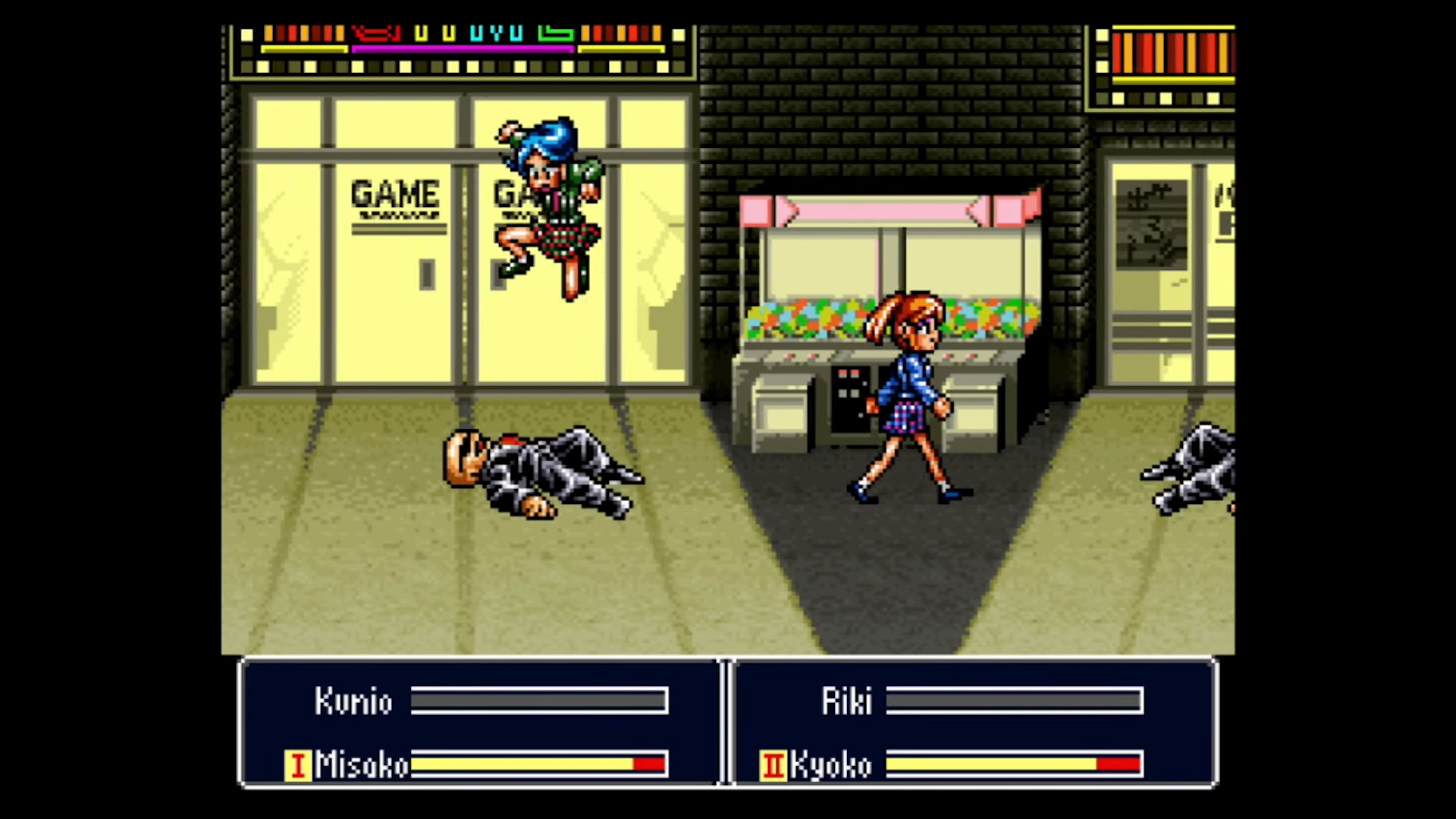 Upon this revelation, a number of Western localizers – whose industry is currently known for providing translations which overwrite the author’s original intent to inject personal opinions and politics – proceeded to cry foul, claiming that their work was being disrespected.

Taking to his personal Twitter in the wake of WayForward’s announcement, Tales of Arise lead translator Tom James wrote to his followers, “the thing I want to emphasize is, practical realities aside, I don’t approach game loc like I’m composing the One True Translation that can exist.”

“What you get when you buy my game is my take on that material, but not THE take, and that that gives me the confidence to be creative,” he said.

“In practice, many of my locs exist in isolation, but not all,” he continued. “I don’t talk about it often, but I get that with Amagami the game, my LP isn’t the only translation folks can experience (or will in the future). That’s okay, neither takes away the ability for the other to exist.”

“So if, say, Namco were to email me ten years from now and be like, ‘Tom, you and your team’s previous localization of Tales of Arise bricks the PlayStation 6, we have to do it all from scratch,’ I wouldn’t be broken up about it because my old work would still exist,” he added.

He then lamented, “But for me to have a career, for companies to trust me with their games and demonstrate that trust has been repaid previously, that work I do needs to be singular for that release. I need a publisher to show my product is sellable on its own merits and that they have my back.”

“Whatever happens after the fact is a separate conversation,” he elaborated. “As long as that work is tangible and I’m credited, that’s what counts. How could a translator like me demonstrate my insight and creative autonomy is worth paying for if it has to compete with itself in its own release?”

Attempting to reassure himself, James concluded his thoughts by opining, “Again, for many logistical reasons, I don’t expect so-called ‘creative’ vs. ‘literal’ toggles to become a facet of the vast majority of game locs going forward. But I hope it’s a choice that more experienced pubs than WF appreciate has grave consequences if handled poorly.”

Adding her thoughts to the conversation, former translator Jennifer O’Donnell asserted, “People in the loc industry are rightfully upset about this decision because it feeds into myths and misconceptions about video game translation.” 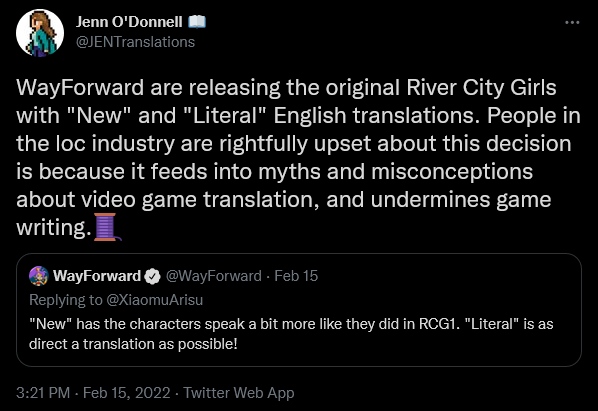 “Directly translating words can create mistranslations and inaccuracies because even if the word seems the same, the intended meaning or the source text, and/or the meaning or interpretation of the translation can vary from the source,” she said.

“With literal translations, meaning and characterization is lost,” O’Donnell continued. “The majority of major studio translations try to maintain the overall tone of the world and personalities of individual characters, translating it so the game writing is as entertaining as the source.”

She then stated, without a hint of irony, “awkward (which often come from being ‘literal’ or ‘direct’) translations undermine game writing too. If I wrote a beautiful amazing text for a game only to have it butchered in another language with direct awkward wording, I’d be upset!”

Taking notice of James’ thread, Kevin Frane, a former translator whose credits include 428: Shibuya Scramble and the first three Yakuza games, declared, I clicked on this thinking “I wonder how many people who aren’t translators are going to b***h about the use of ‘creative’ here and it was basically the entire thread.”

“Kinda glad my translation career is over because we have the most ungrateful fans in the whole g—–n world,” he told his followers. 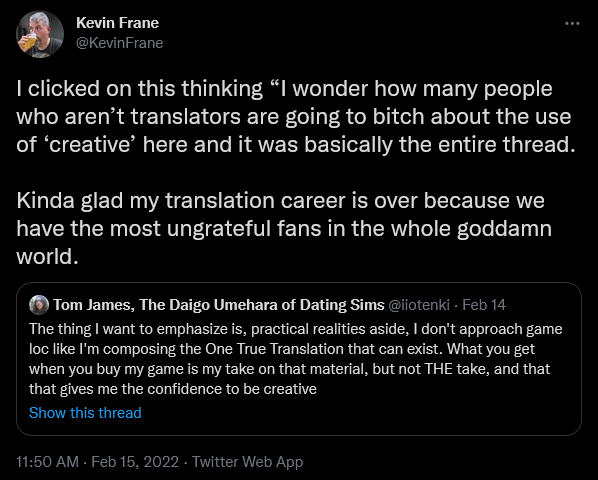 Met by a fan who explained, “Because the creativity usually sucks. Nobody wants to hear the translator’s attempts at comedy or their political opinions. People want to know what the original said,” Frame dismissed them, pushing back, “I want to see a list of all these games supposedly infected by the ‘translator’s personal politics’ epidemic.”

“For as much as I hear alt-right gamers drop this accusation I’ve literally [never] seen it in person,” he said. “Which I realize probably means it’s BS, like most alt-right nonsense, but…” 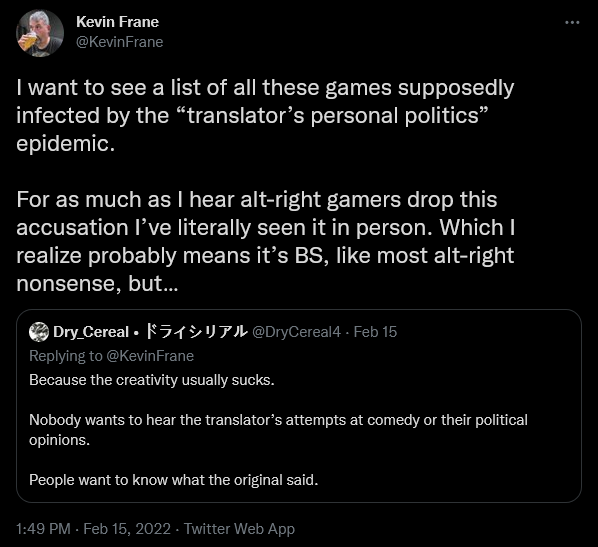 Predictably, when @DryCereal4 put forth the bastardized translation of Fire Emblem Fates as one such example, Frane continued to disingenuously repudiate them, writing, “Ah, of course, Fire Emblem Fates. The f–king Benghazi of online arguments about video game translations.” 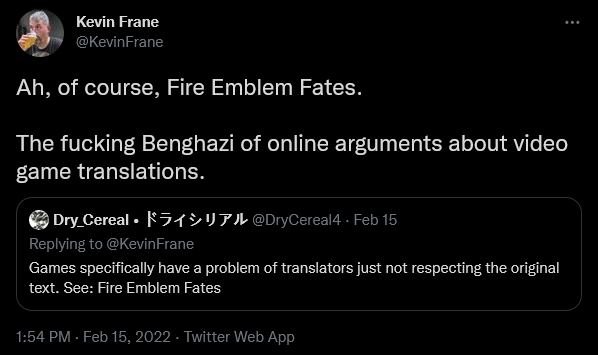 “Like yeah, the localization job of Fire Emblem Fates was a disaster,” he further dismissed. “It was also half a decade ago and almost never germane to the discussion at hand other than to exemplify ‘translation bad.’”

Replying to a separate thread in which @DryCereal4 opined that “ if localizers were less defensive and more humble and capable of taking criticism, that criticism would in turn come from much less of a resentful place,” Frane interjected, “Yeah, I’ll be humble and take bad faith criticism from people who don’t know the first thing about how this job works to heart.” 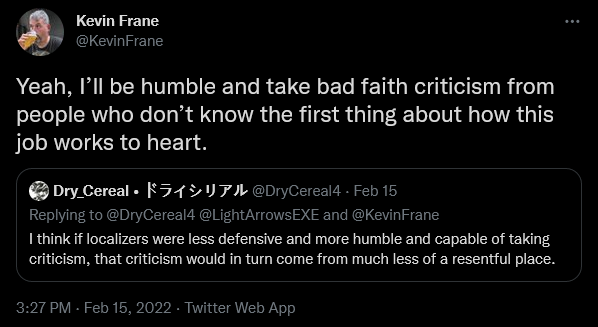 Ultimately, Frane doubled down on his accusation that his critics were members of the alt-right, stating, “At the end of the day, all I really have to say is this: Translation is an inherently creative endeavor, as much an art as it is a science.”

“Localization is not a dirty word and it’s not a conspiracy to ruin your Japanese media experience,” he maintained. “And the alt-right acts in bad faith.” 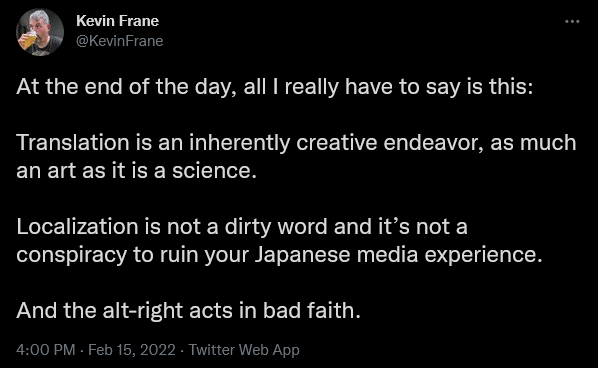 As for WayForward, in light of the criticism leveled against them, the developer announced that they would rename the translations from “new” and “literal” to “RCG” and “original.”

“We hear you,” wrote WayForward. “‘Literal’ was a poor word choice and not intended the way it was taken. So in the next River City Girls Zero update and all remaining versions, the two English translations will be labeled ‘RCG’ and ‘Original.'”

“These terms better reflect our intent for localization,” they said in closing.

What do you make of WayForward’s inclusion of two separate translations in River City Girls Zero? Let us know your thoughts on social media or in the comments down below!