Audience scores are rolling in for Tom Holland and Mark Wahlberg’s Uncharted film after the movie rolled into theaters on February 17th. 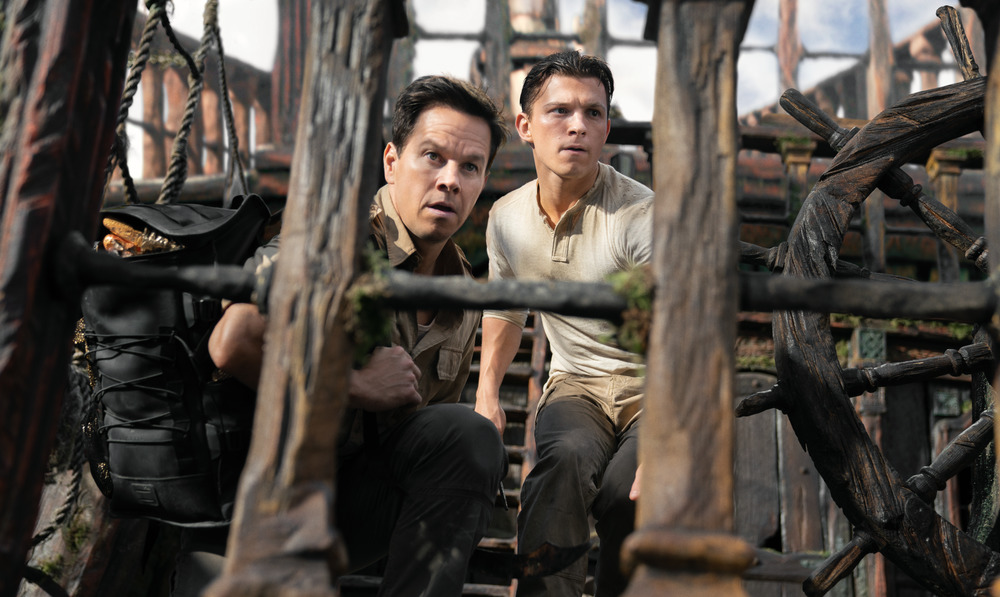 On Metacritic the film currently has a User Score of 6.1 from 32 ratings with 18 positive ratings, 4 mixed ratings, and 10 negative ratings.

Here’s what some of the moviegoers are saying on Metacritic:

Sampao gave the film a 6 out of 10. The user wrote, “Well, Tom Holland is great. Mark Wahlberg is abysmal. Nothing of the fatherfigure that Sully is supposed to be for Nate. Bad jokes and some unbelievably bad acting on Wahlbergs part. The story is fine. Some ultra unrealistic moments that are really stupid. Sense of adventure is great though.”

Lastofusgirl gives the film a 1 out of 10. The user wrote, “The storyline is wrong. The actors are casted because of their connections not their skills. The main roles were given to people that look nothing like the main characters ( looks, behaviour ,age ). Acting skills were completely off and not even trying to put an effort into it. Script was so whatever not even trying to make good jokes or deep conversations. Movie was too short for an uncharted game based movie. If you were a gamer and you grew up with the franchise you’d hate its guts. Only good actress and casting was Tati and she was like a character from the game. If they wanted something different they could’ve made another non related movie cause it was actually just stealing the names without any relation to the real games.” 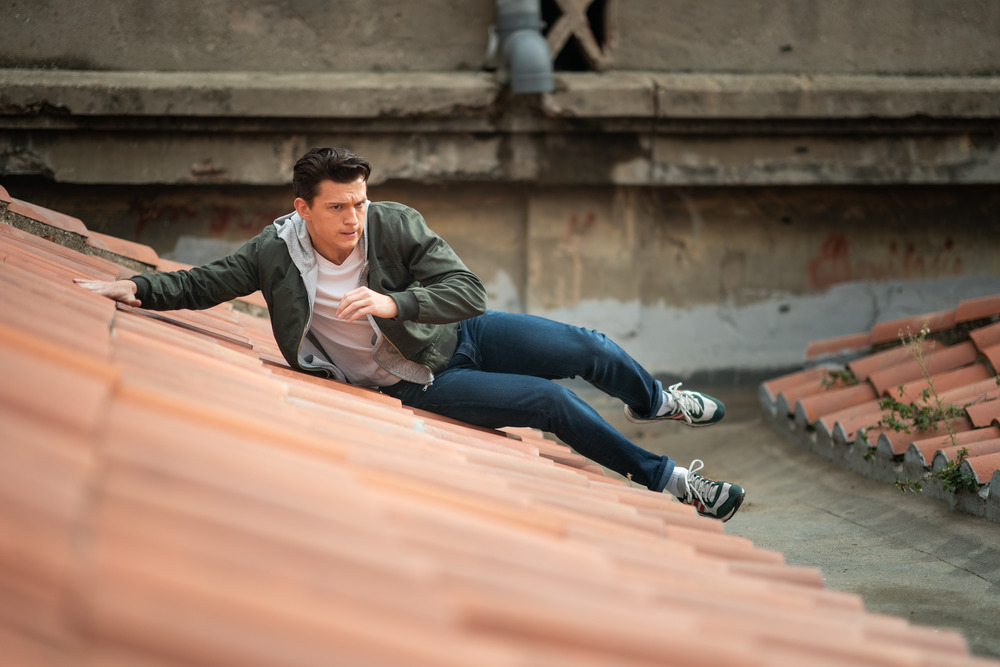 Azgoodaz gives the movie a 2 out of 10. The user states, “A 15 minute short film with Nathan Fillion called ‘UNCHARTED – Live Action Fan Film (2018) Nathan Fillion’ is better than this movie. Perfect cast, perfect action and great dialogue. In this movie you get nothing but a 22 year old actor and Mark Walburg that doesn’t have any acting skills, the team is horrible, acting is bad, action is bad, the main ‘boss’ is bad and lacks on screen time and the puzzles are bad. I’d rather watch every single Indiana Jones movie than watch this movie again. Sony lacks talent to move their IP’s to a big screen. Sony is more about milking the fan-base than actually building a great video game to movie adaptation.”

AndyG95 gave the film a 10 out of 10. The user wrote, “I’m a HUGE fan of the Uncharted games, and I LOVED this movie! I was nervous going into it, but I was not disappointed!!! Definitely an amazing movie!” 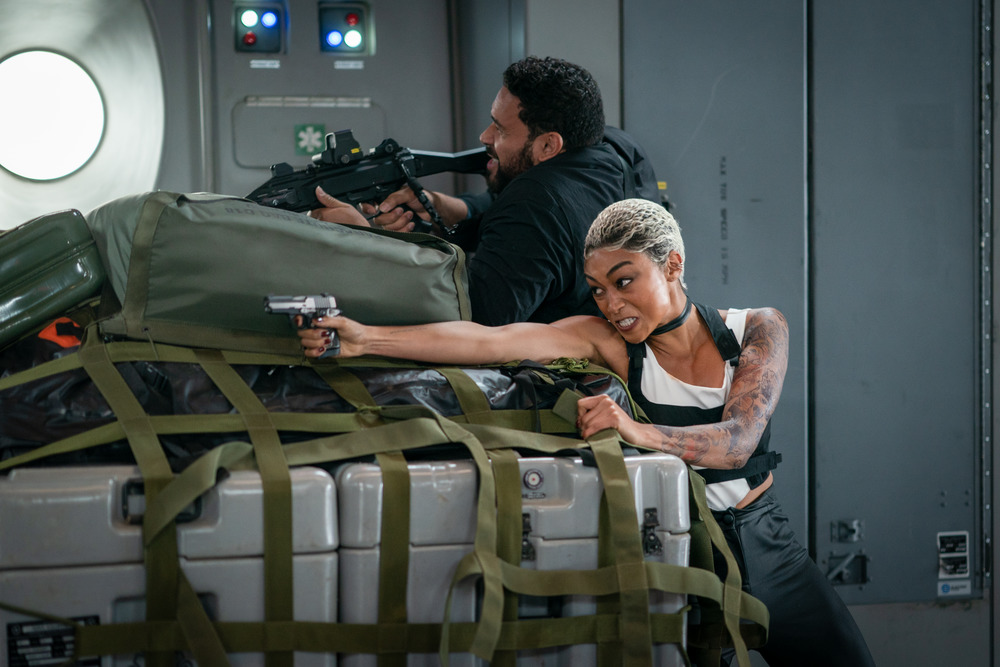 Themadcow gives the film an 8 out of 10. The user states, “I came into this moving having played precisely 4hrs of Uncharted games – it’s probably a good thing as even a basic knowledge of the characters revealed that casting was a bit odd. However, as a fast paced action romp that I could enjoy with my son it was actually pretty good. Pretty much exactly what you’d imagine if someone said “imagine a globe trotting Indy-lite action film with a half decent cast and budget.”

Ernes_sierra gives the film a 0 out of 10. The user states, “Unoriginal script that we have seen so many times before, jokes that don’t land, forced chemistry between Nathan and Victor, cliché boring villains, generic score without any personality, characters that are not flesh out, no stakes at all, badly edited movie,… The fan made uncharted movie from 2018 was so much better than this one.”

Monagates gives the film a 10 out of 10. The user writes, “Enjoyable Game Adaptation with inspiration from Indiana jones. Sure some roles were miscast however Tom Holland did a solid job as Nate. It’s a treasure hunt action packed with chases, gunfights and puzzles. Go see it.” 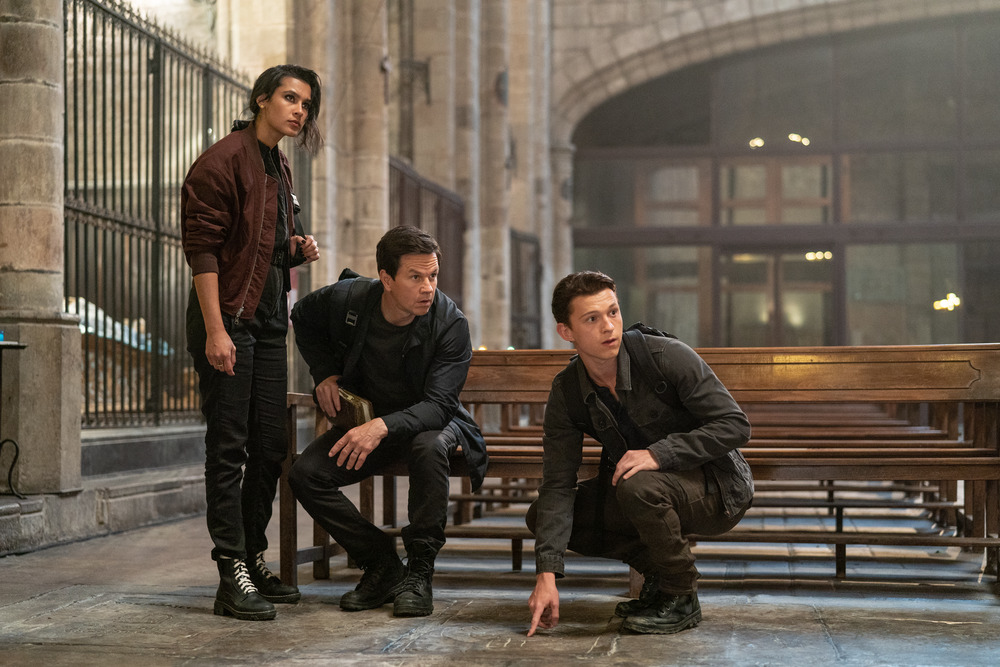 On IMDb the film currently has a weighted average of 6.8 out of 10 from 12,160 IMDb Users. The arithmetic mean and median are both currently sitting at 7. 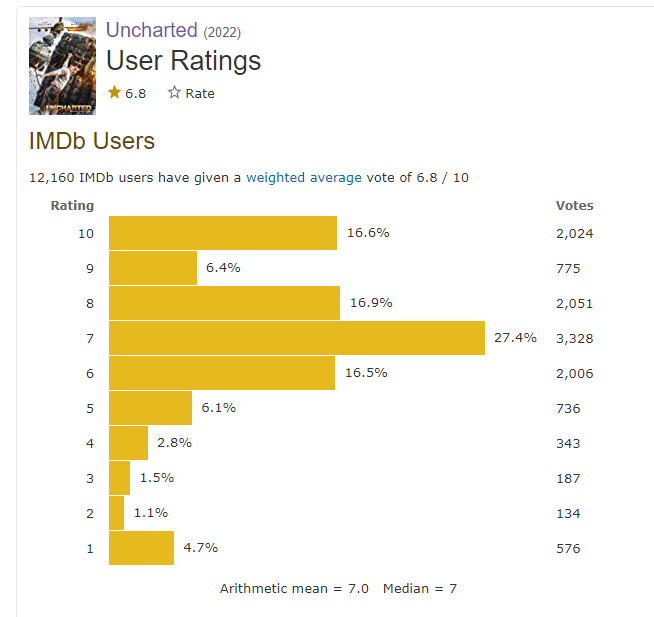 RELATED: New Synopsis Released For Tom Holland’s Uncharted Film Details It Will Be An Origin Film

Females over the age of 18 did give higher scores than males overall. Females 18-29 gave it a 7.2 compared to males in the same age bracket giving it a 6.7. 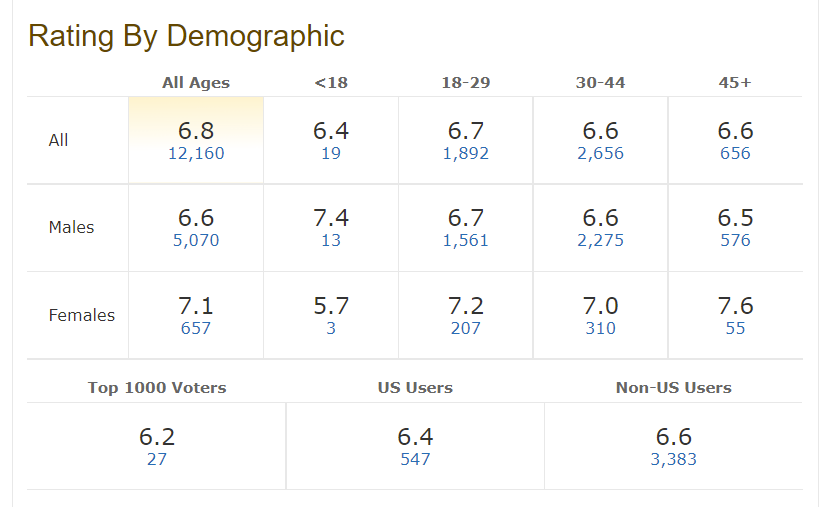 Here’s what people are saying on IMDb:

Caliodreaming gives the movie a 5 out of 10. The user writes, “Obvious cgi, plot holes, and lack of character depth made uncharted fall in the kind of lame category. Some funny moments between Wahlberg and Holland and decent sets. It was just too unbelievable.”

Subxerogravity gives the movie a 7 out of 10. The user states, “Uncharted had a feel that it was based on something else, but I was thinking like a book or something. I’m guessing sense Playstation produced this than that means it actually based on a game. Can’t tell you if it’s true to the material, all I can tell you is that I liked it. It’s an action-adventure flick that’s fun and exciting. Tom Holland and Mark Walberg made a decent team for me. It’s funny, I could not see either or doing the movie by themselves, but they make a lot of sense together. Can’t come up with much to say about it, except that it was as good as I thought it would be. It not going to change lives and it’s in no way bad movie, and in all the ways its worth seeing.” 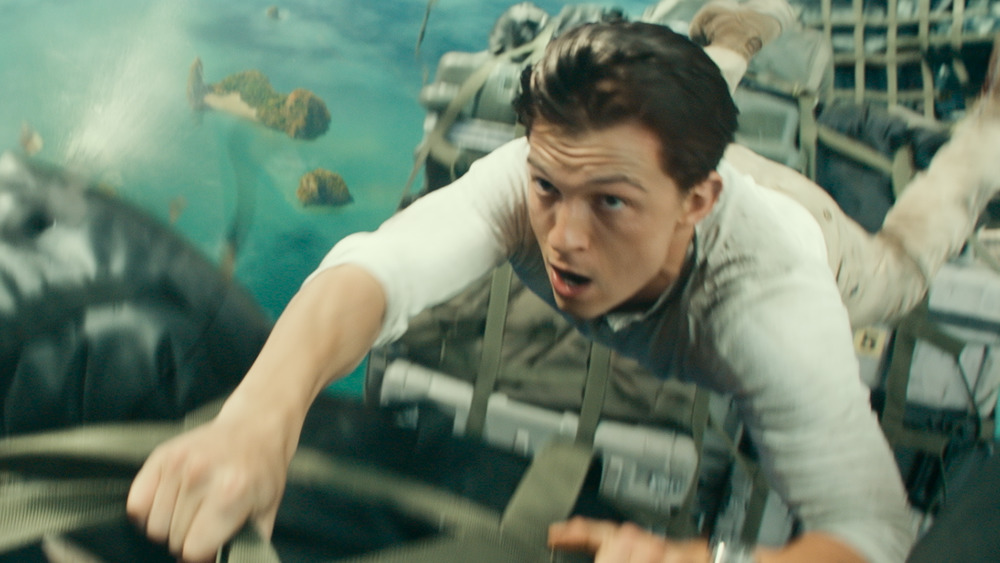 Masonsaul gives the film a 7 out of 10. The user says, “Uncharted is by no means a smart film but its still a really fun movie that’s fast paced and consistently exciting whilst also being somewhat faithful to its source material. Tom Holland and Mark Wahlberg do not embody their video game counterparts however they still give likeable and charismatic performances with solid chemistry. Sophia Ali is great as Chloe Frazer and definitely comes closest to her character overall. Ruben Fleischer’s direction is really good, action sequences are competently shot with sufficient energy and its visually slick overall. The CG is mostly impressive and the music by Ramin Djawadi is also great, fitting the film extremely well and uses the iconic theme in a satisfying way.”

Kaefab gives the film a 4 out of 10. The user states, “Well Tom Holland doesn’t look nor sound like Nathan Drake so from the start first strike even worst Marc Walberg as Sully even worst casting. The only enjoyable casting was Chloe she look pretty hot and was great in her role. Seems like they wanted to mix and match all Uncharted games in one movie and yet again that fails. I really hope they stop at this one and not turn this into a series of 4-5 movies.” 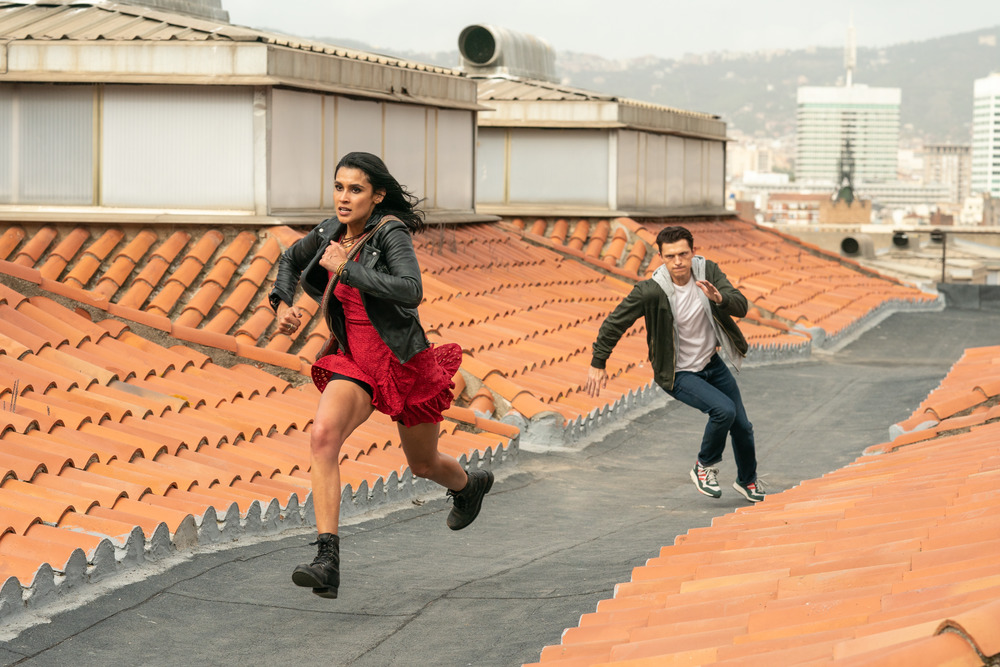 Sbweightman gives the film a 7 out of 10. The user says, “A thoroughly enjoyable adventure with plenty of action, adventure and acrobatic hijinks. The story’s predictable and with a good balance of modern day and historical locations, although the villains aren’t particularly interesting and the constant one liners between the leads aren’t particularly funny. Overall things are kept light and with good pacing which makes for good, if not particularly memorable, entertainment.”

Witra_as gives the film a 7 out of 10. “Enjoyable fast-paced adventure romp based on video game. Ruben Fleischer gave a good amount of action, comedy, thrills and plot twists along the way. Aside nice chemistry, Holland & Wahlberg were cinematic gold to reignite our interest even for potential sequel,” reads their review.

Jamiekressinger gives the movie a 7 out of 10. The user writes, “You lot moaning about Tom Holland being cast as drake so giving it low scores. Did you not see the trailers then at all. Cause if you did why go watch it knowing you’d cry like a baby about it. Game to screen fun. That’s it.” 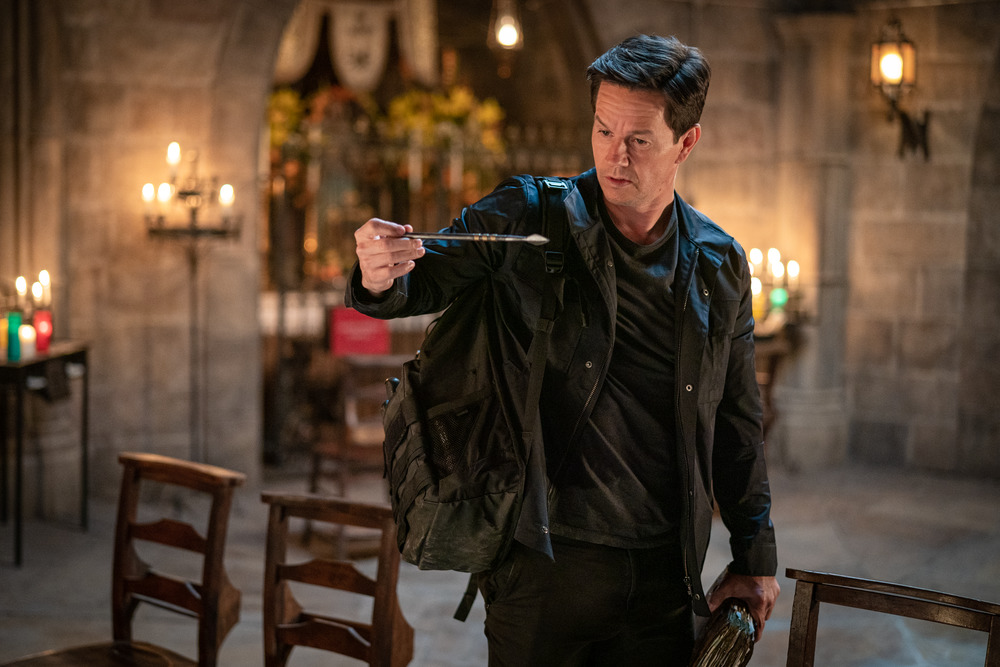 Aramsdale gives the film a 3 out of 10. The user states, “These are the type of films that make me want to give up my cineworld card, that I’ve had for 16 years. Fast & Furious style nonsense that bores me to sleep – literally. Dumb & stupid but not in a good way & way too long. I hope they’re not planning on starting a new franchise cos they’ll lose millions & deservedly so.”

Shaikhirshad-41223 gives the movie a 7 out of 10. The user says, “Frankly I have not played any Uncharted game before but still the plot feels Good. It has story telling, great puzzles and some sort mysteries which makes the movie cool to watch it. As of the movie story could’ve been proper executed but still it’s ok. Action, Bgm, Cinematography all are amazing. Lead cast done justice to their roles as well as the supporting cast. If you are looking for a mimd fresh movie go for it definitely it’ll worth a try…” 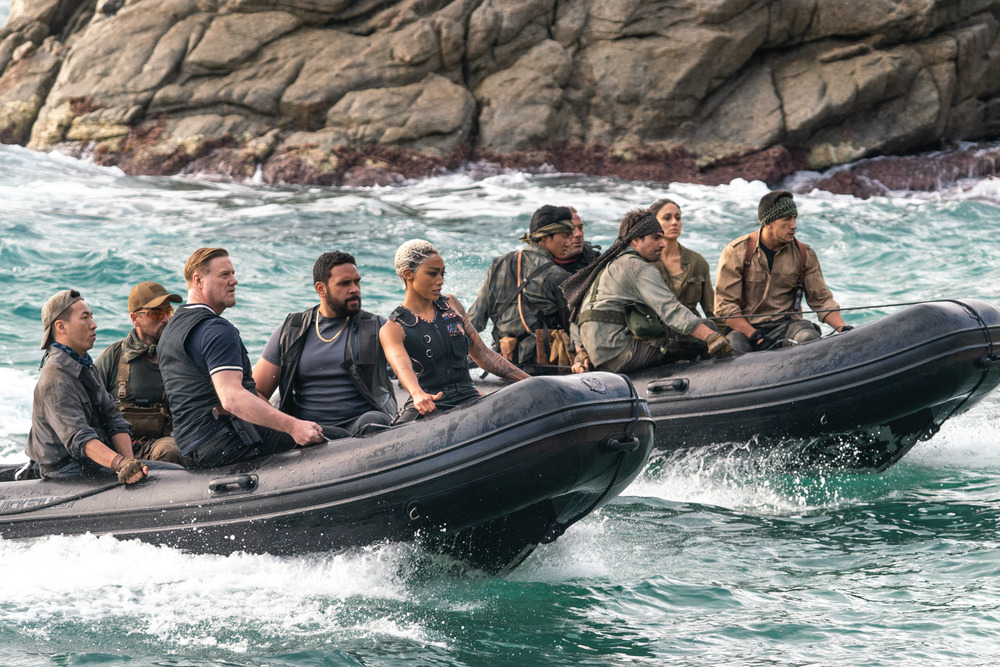 According to Box Office Pro, the film is expected to earn between $25 and $35 million in its opening weekend. Given the holiday weekend, they predict it’s 4-day opening haul will be between $30 and $40 million.

At the end of January, Box Office Pro predicted its 3-day opening weekend would be between $25 and $40 million and that its entire domestic run at the box office would gross between $65 and $105 million. 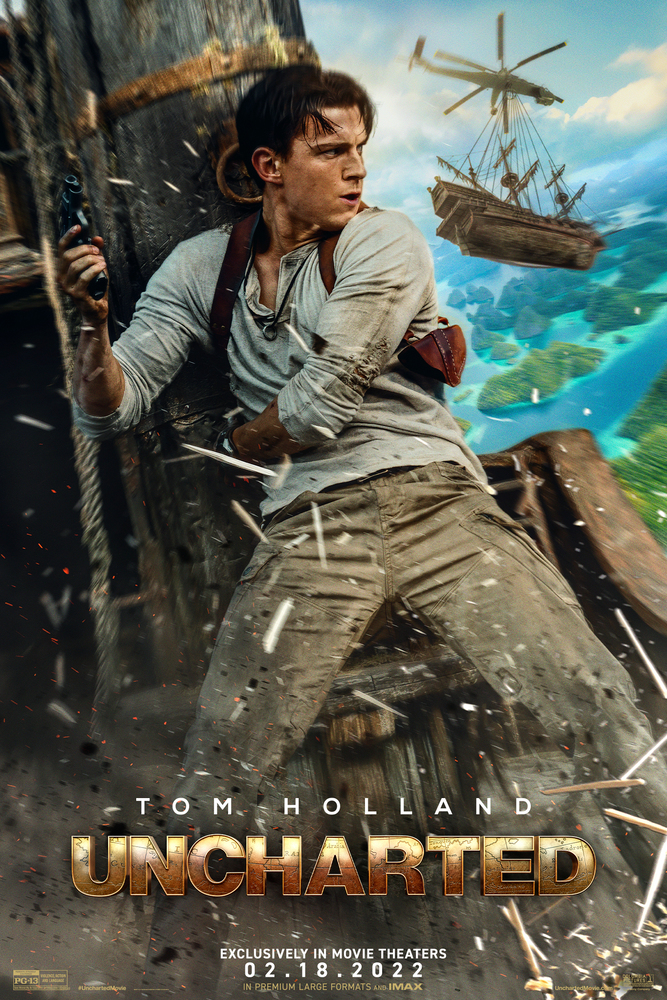 What do you make of these audience reviews? Do you plan on seeing Uncharted?