Former Marvel Comics writer and editor Carl Potts known for his work on the Punisher and specifically on Punisher War Journal recently revealed that Disney spent $6 million on rewrites for an Alien Legion film. 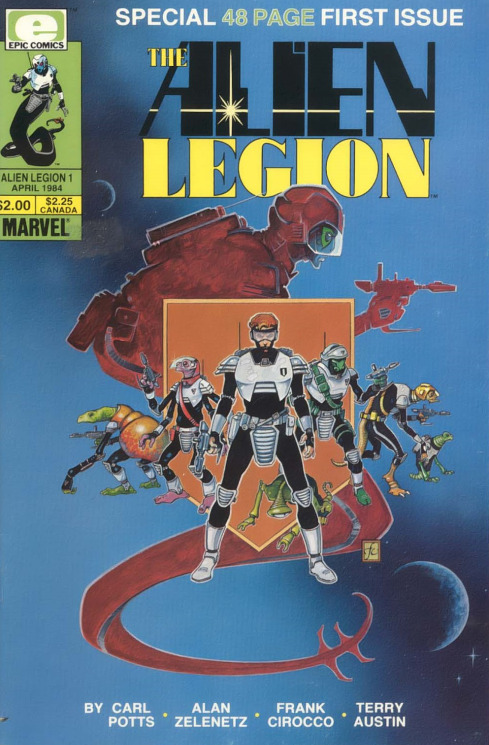 In an interview on The Baron Earls show with fellow Punisher writer Mike Baron and PistolFist creator JS Earls the topic of Alien Legion was brought up after Potts detailed a number of paintball games he played against cadets at West Point.

Earls asked, “Did any of that stuff influence your creation of Alien Legion or anything?”

Potts responded by revealing how Alien Legion came about, “No, Alien Legion got started way before that. When I was in my early 20s and trying to break into comics, I would do, like a lot of people do, drop sample pages and send them in and wait to try and get a response. Usually, if you got a response at all, it was a form letter months later. Sometimes I’d write a quick little note at the bottom of it.”

“But I was working on two stories at once,” he explained. “One was sort of an all-human Foreign Legion in space. And another different story was about a couple of aliens that were having a battle and one of them had this serpentine lower body.” 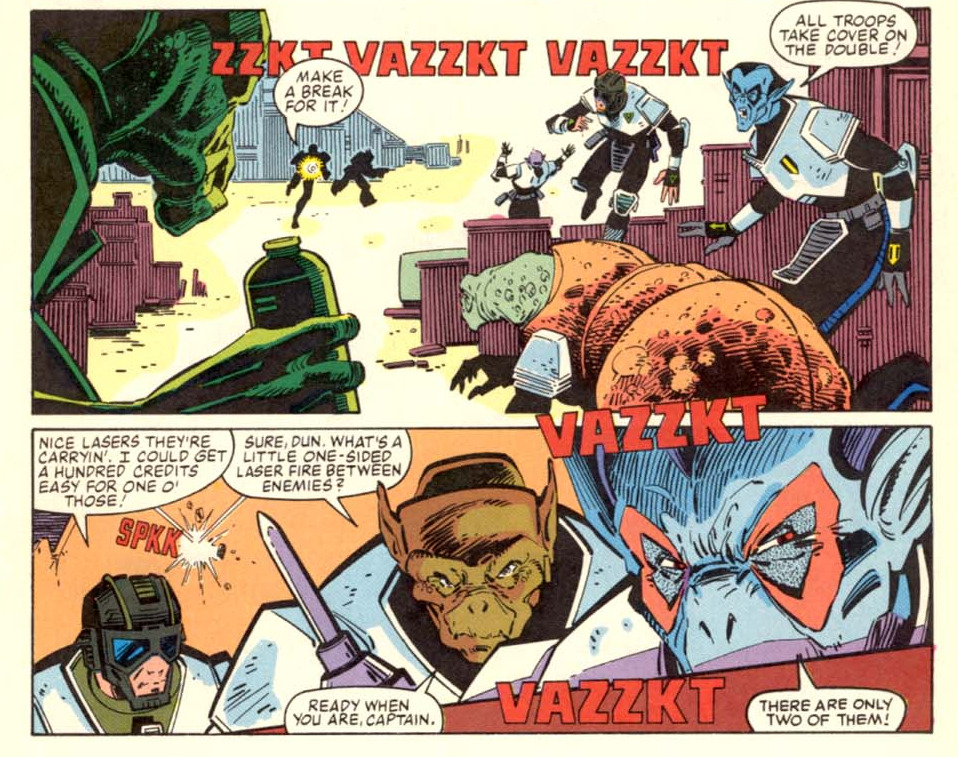 “And this is an example I tell my students of creativity is often juxtaposing things that you don’t normally think of whether on purpose or accidentally,” he said. “But I accidentally knocked all the pages for both these stories off my bed on to the floor and they all got mixed up.”

“And as I’m starting to sort them out, the light bulb goes off and I go, ‘Why on earth are all of these guys in this space-born Foreign Legion humans? And they should be led by this guy with the serpentine lower body,” he relayed.

“So that was always knocking around the back of my head for a long time. I never had time to really do a whole lot with it until I got to Marvel, and even then I was so busy editing and drawing other things that I ended up teaming up with Alan Zelenetz and Frank Cirocco to bring out that initial series,” Potts disclosed. 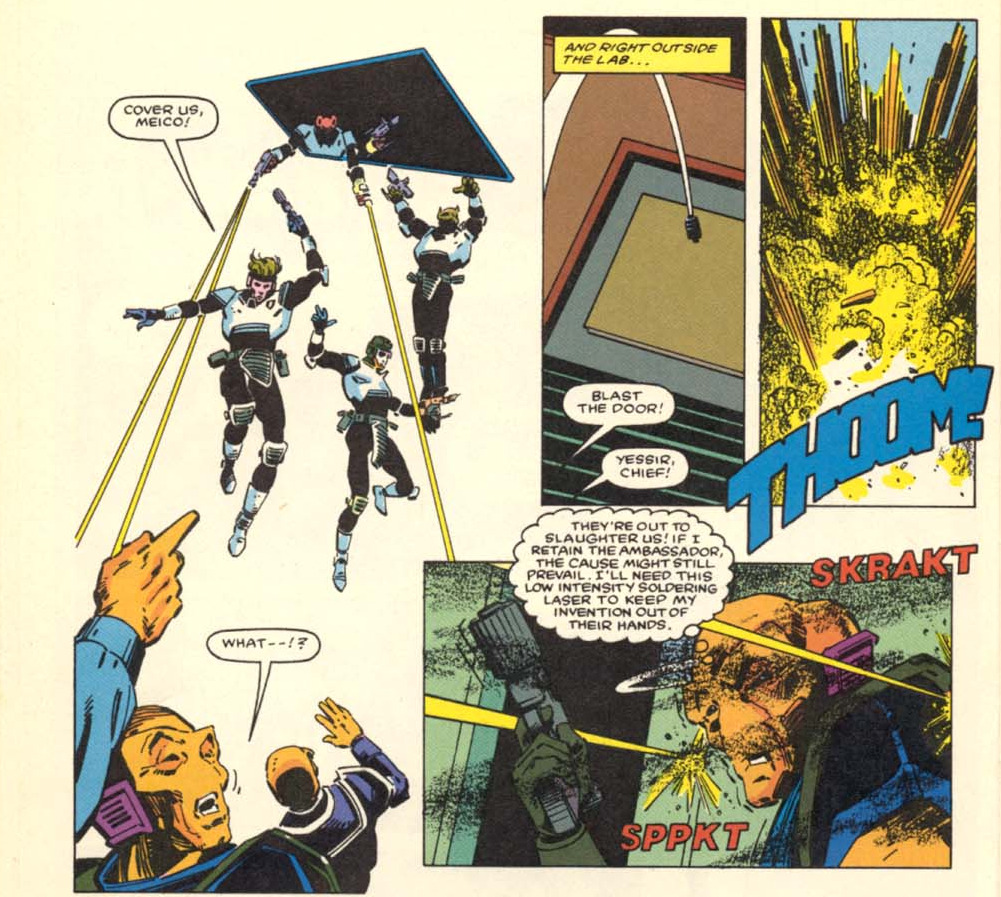 Potts then revealed the series has been optioned for live-action quite a bit.

He explained, “That thing has been optioned more times than I probably got digits on one hand. I sold it 12 years or so ago to Disney and Bruckheimer.

Potts continued, “They proceeded to have half of Hollywood rewrite my screenplay including David Benioff who turns out that — one of the chief guys from Game of Thrones — turns out that he made me feel old. He told me he grew up in Brooklyn being an Alien Legion fan.” 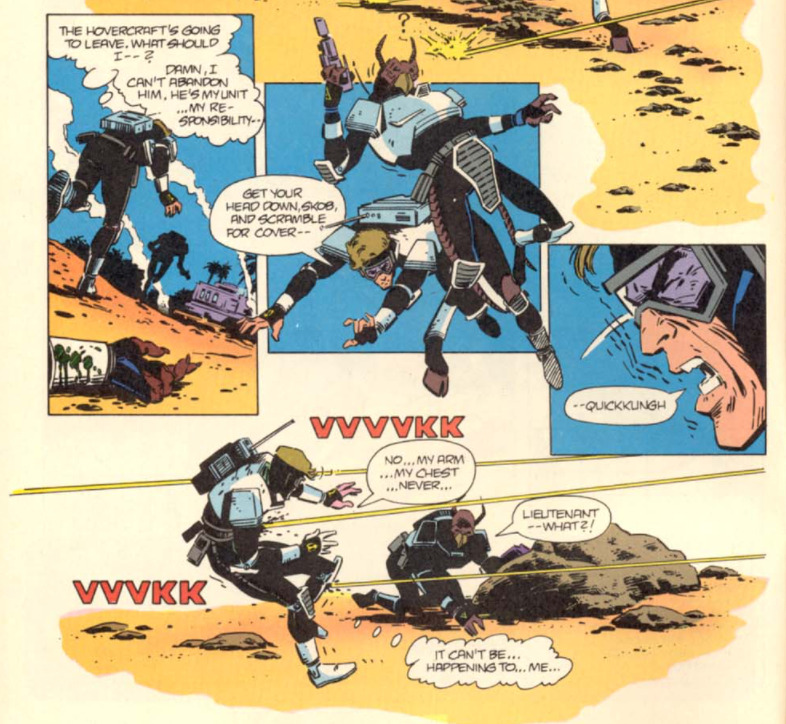 The Punisher writer then detailed, “Time ran out on the contract so it reverted back to me, but there was a clause in there that Disney had that said if I set it up elsewhere the deal has to include Disney being reimbursed for all of their development costs. 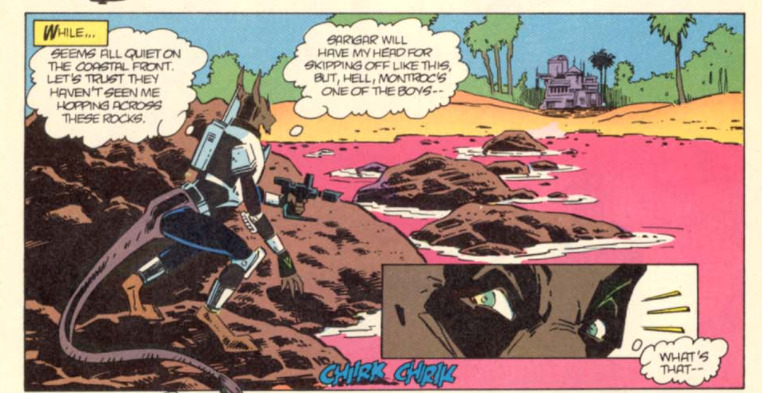 He then went on to detail he’s still trying to get it set up elsewhere, “So I had two deals set up with other major entities, production entities, but neither one of them could close because they couldn’t get Disney to cooperate with a reasonable payback plan.”

“But in recent months I’ve been in negotiations with another situation,” he revealed. “Keep your fingers crossed. I think there’s a chance that it might actually come about. I’ve got a top producer and a top director involved.”

“It seems like Hollywood’s full of Alien Legion fans just trying to get this thing made with this Disney debt thing has been tough. So keep your fingers crossed,” he said, 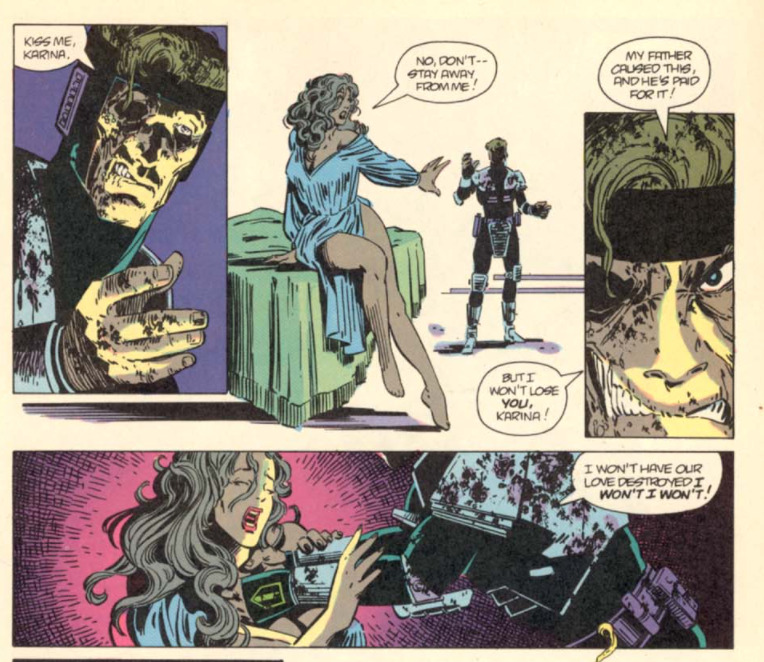 Potts would later reveal that he previously pitched the series as a TV series, he relayed, “One of the things things we did awhile ago is we pitched it at one of the major cable companies a while back as a series. I mean it was built as a series. So it could go either way.

“I think it’s like — again I’m slightly subjective on the subject  — but I think it’s one of those things that the universe is so big and there’s so many characters that you could have any kind of spin-offs and things going on,” he asserted. 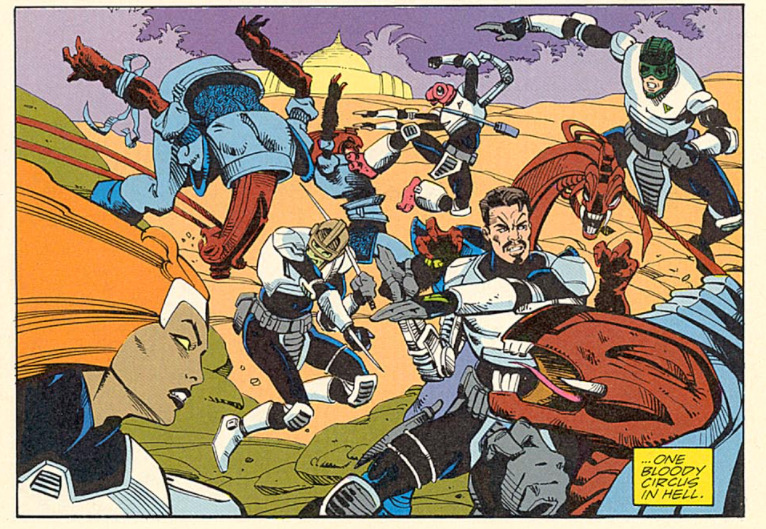 The first series would run for 20 issues. A second series primarily scripted by Chuck Dixon with art by Larry Stroman debuted in 1987. Following this series Dixon would work with a number of artists on a number of miniseries and one-shots. 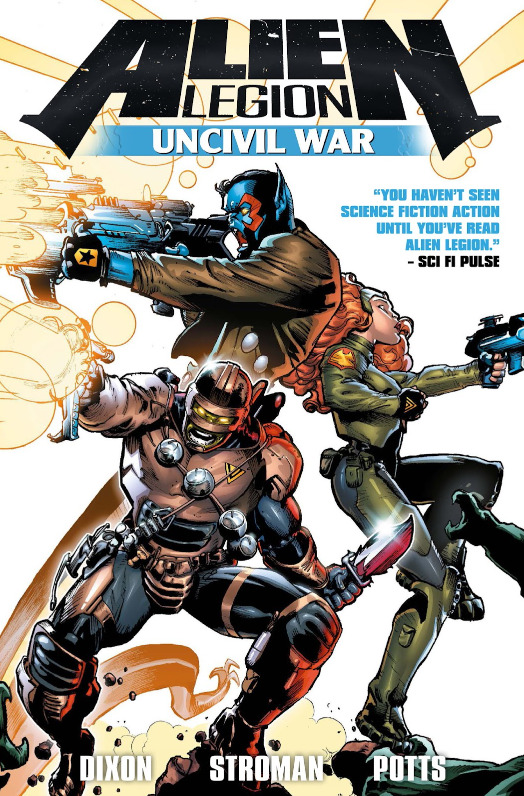 In an interview with Alex Grand and Jim Thompson, Potts revealed the Alien Legion property was originally optioned for TV back in 1996 by MGM. Back to the Future’s Bob Gale wrote the pilot script. However, MGM would eventually stop development of the series because they were getting out of the TV business completely.

The property would then be optioned by Dimension Films with Potts detailing that the first draft of the film was very disappointing to him. The project ultimately died following a management change at Dimension Films.

Mainframe Studios eventually began adapting the property and even hired Potts as an executive editor to create an animated version. Unfortunately, like Dimension Films there was also a change in management and the project was cancelled.

Potts then revealed that through Remember the Titans director Boaz Yakin is how Alien Legion was optioned by Bruckheimer and Disney hoping they could find the same success they had with Pirates of the Caribbean in a science fiction property. 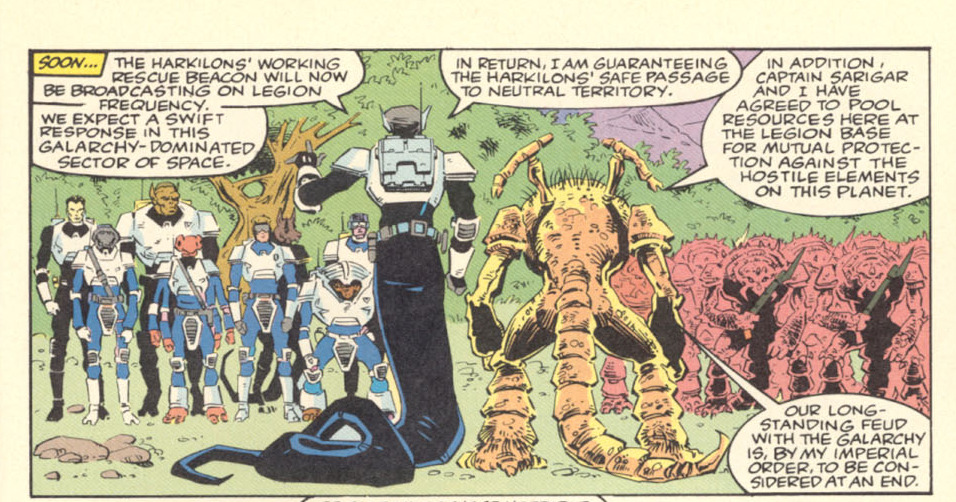 According to Potts, Disney controlled the rights for 3 years before hiring Benioff. Benioff would apparently do three rewrites. However, none of them went anywhere. Potts would then introduce Tim Miller to Bruckheimer’s people, but as Potts details they didn’t want to use Miller because he didn’t have any feature film credits at the time.

Their interest in Miller would change following Deadpool, and they allowed him to read the last Benioff script. Potts would then reveal that Miller relayed to him that Disney was trying to turn Alien Legion into a science fiction Game of Thrones. Miller wasn’t interested in that and Potts’ contract with Disney ended albeit he noted that the language in the contract was making it difficult to make a deal elsewhere. 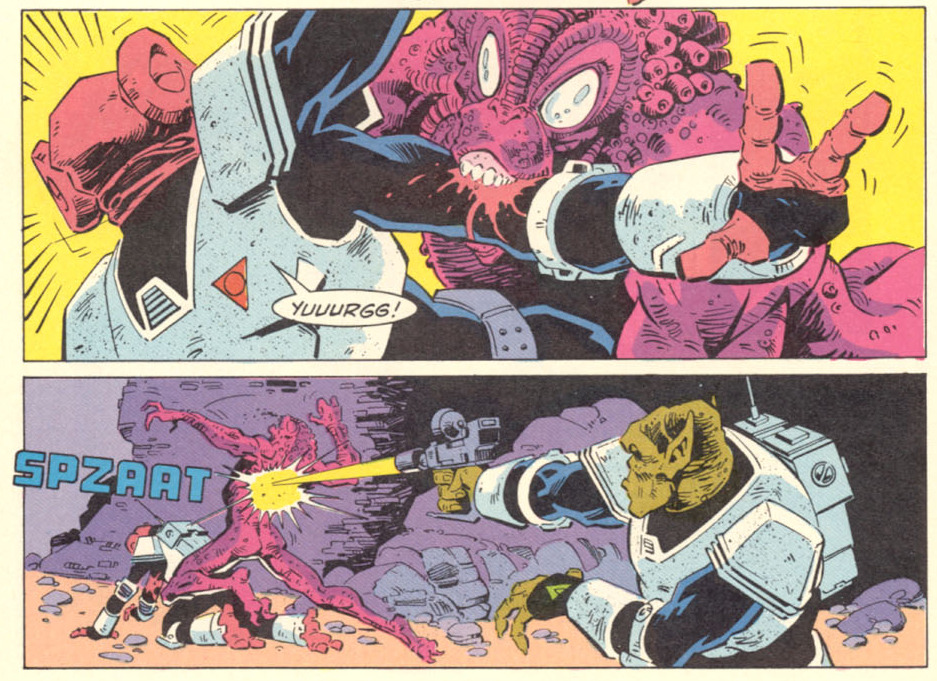 What do you make of Potts’ revelation about how much money Disney spent on rewrites for a script they never even used? Are you interested in seeing an Alien Legion film and possibly TV spin-offs?

NEXT: Prolific Punisher Writer Carl Potts Explained The Core Of The Punisher’s Character And Why Fans Are Attracted To His Stories