The spring 2022 anime season continues to bless anime fans with fantastic content. Four weeks into the season and there has been some jostling for the top spot on Anitrendz’s weekly top anime charts between Kaguya-sama Love is War -Ultra Romantic- and Spy x Family each week. 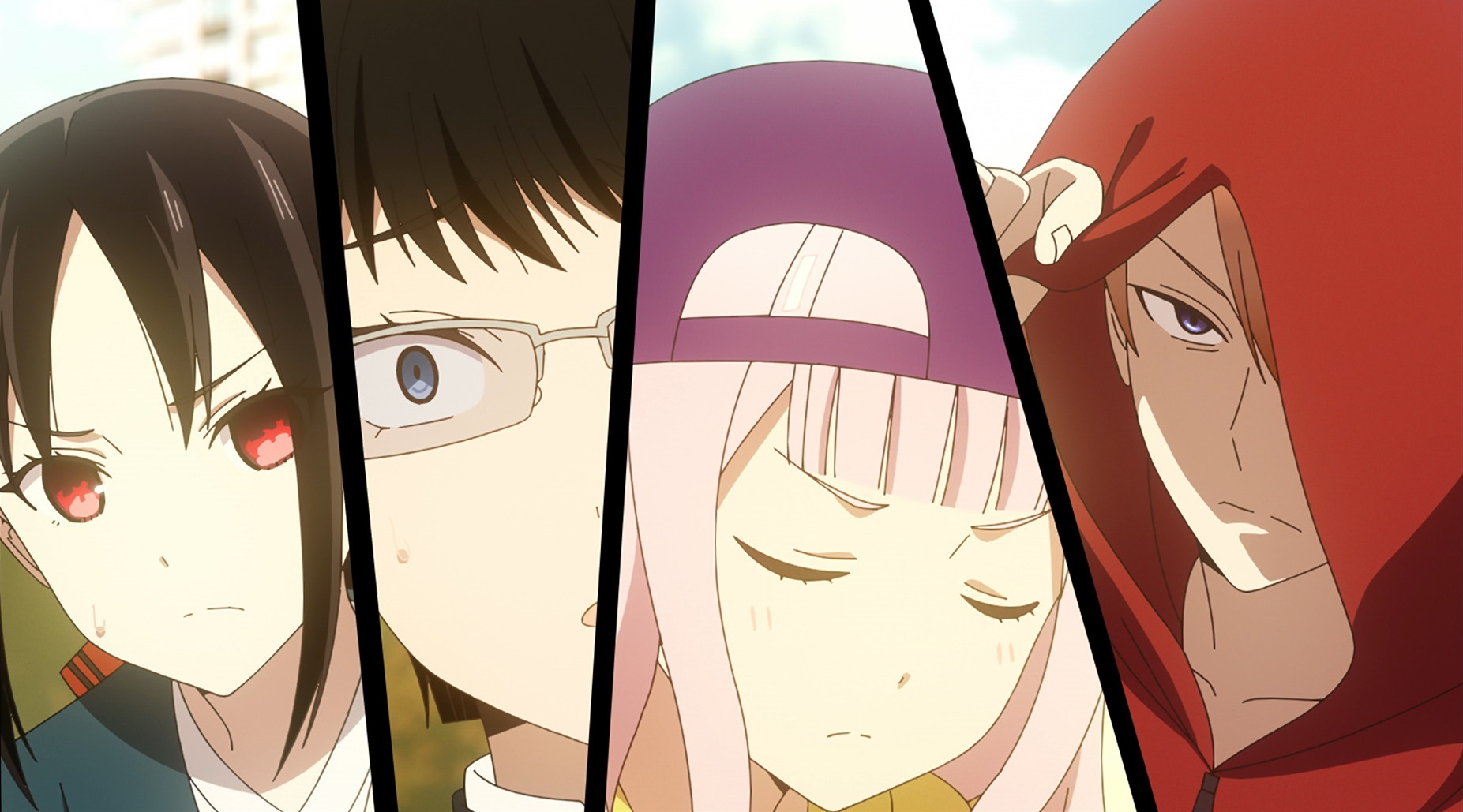 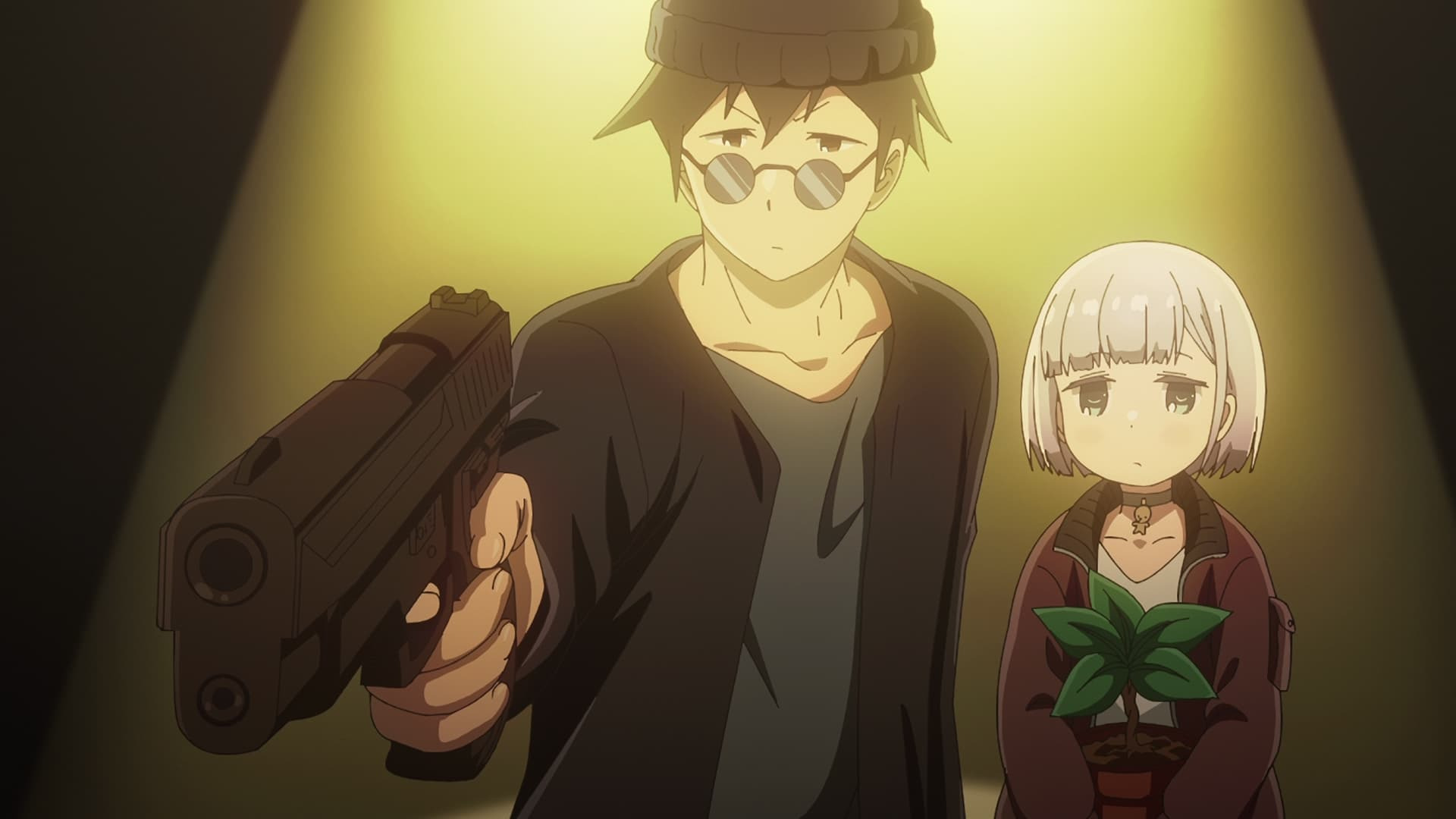 Aharen-san wa Hakarenai is a slice of life series that follows the awkward relationship between Matsuboshi Raidou and his petite, soft-spoken classmate Reina Aharen, who just so happens to sit right next to him.

In episode 6 titled “Are We Too Good?” after Aharen and Raido receive a swimming lesson from Oshiro, they begin to compete at table tennis, ten-pin bowling, and basketball. However, Aharen and Raido are both so bad at sports each game ends in a draw.

Aharen finally beats Raido at an arcade shooting game. After a brief trip to the restroom, she begins acting differently to the point where Raido begins to believe Aharen has amnesia or is a clone.  When the real Aharen pops out, it turns out the new Aharen is her little brother Ren who likes to wear Aharen’s clothes. 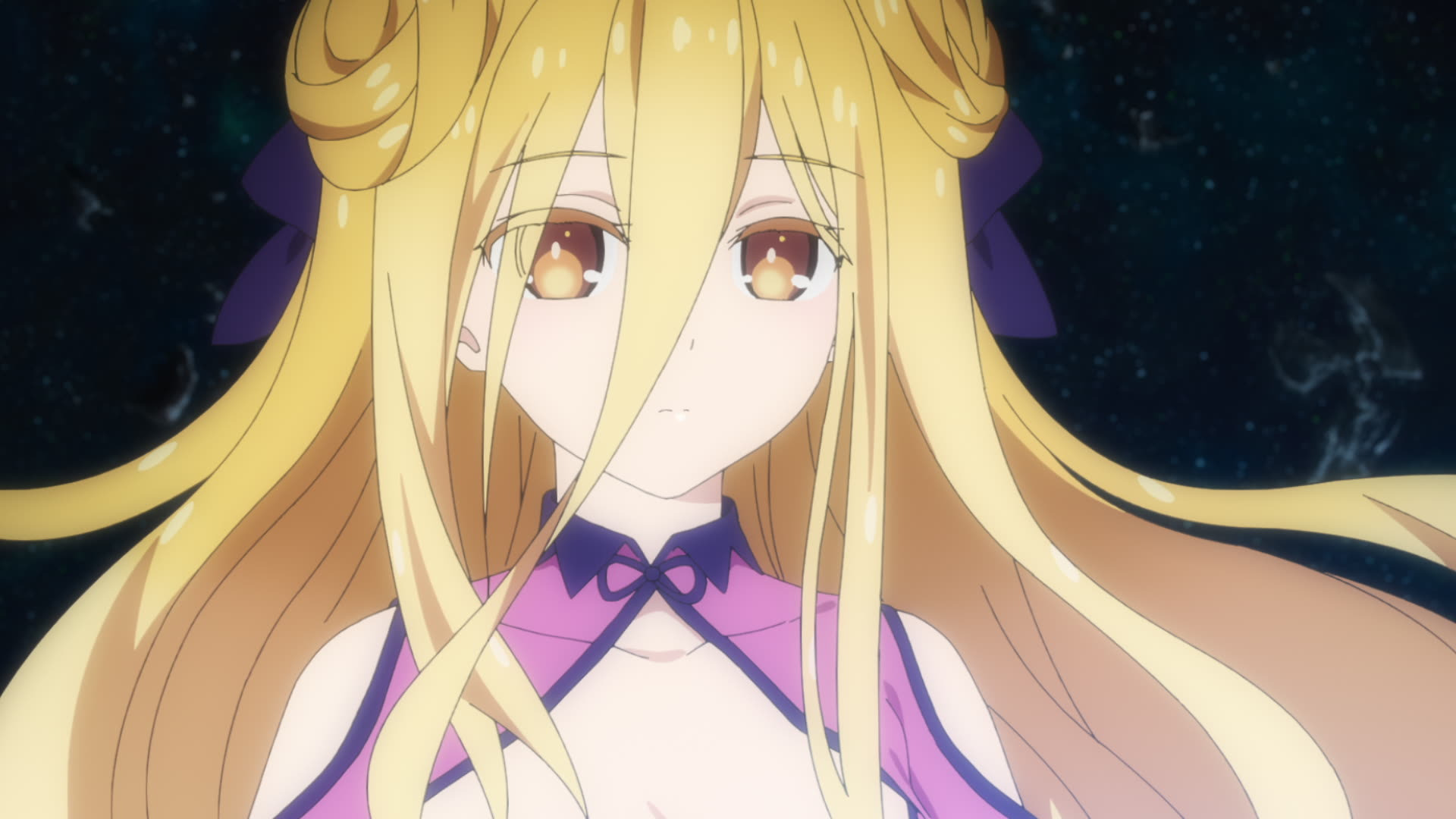 The synopsis for episode 5 “Fairy Tail” provided by Crunchyroll states, “Trapped by Beelzebub in a world of fiction, the crew is desperate to escape. But without their powers to aid them, they’re at the mercy of the story they’re inside.” 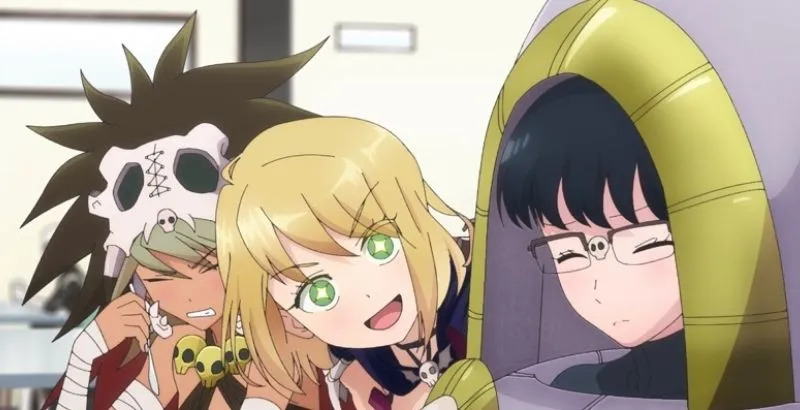 Love After World Domination puts a new spin on Romeo and Juliet. The synopsis from Crunchyroll reads,”It’s love at first sight for Fudo and Desumi, except it was during a battle of life and death. Fudo, leader of the hero squad Gelato 5, and Desumi, the Death Queen of the evil society Gekko, have found themselves caught in a forbidden love—and it’s their first relationship! Moving in secrecy, they live holding hands with one weapon in the other, finding out what’s truly fair in love and war.”

The synopsis for episode 5 “Just the Way You Are?” states, “As Desumi’s job competitiveness grows, so do his friendships. A classmate of Desumi’s has a relationship problem and Desumi offers his experience in these issues to help her.” 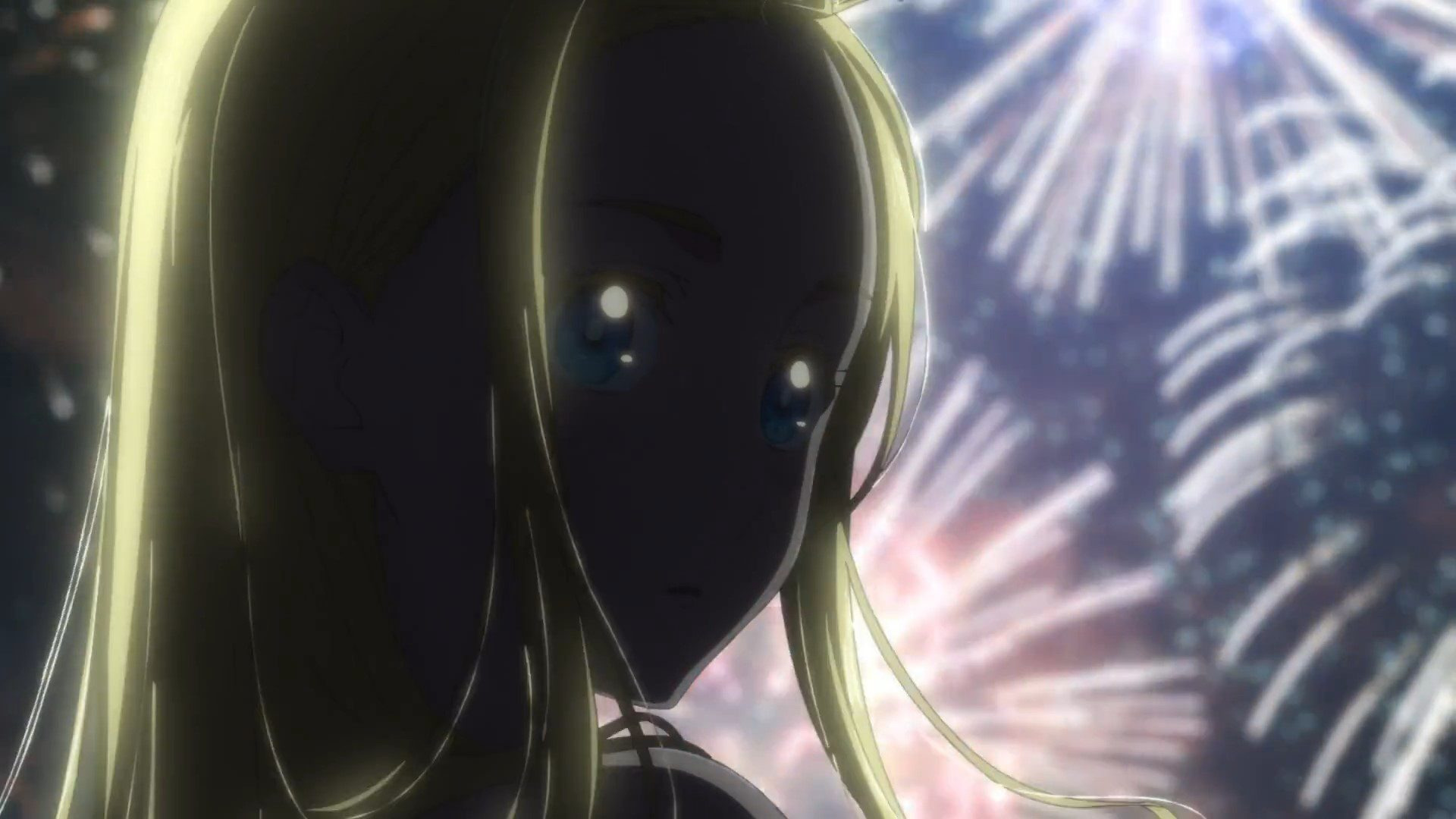 Summertime Rendering is a mix of a mystery, thriller, and supernatural and is an adaptation of Yasuki Tanaka’s managa. The synopsis from Manga Plus for the series states, “Upon hearing of Ushio’s death, Shinpei returns to his hometown of Wakayama City on Hitogashima and reunites with his childhood friend’s family. The funeral goes smoothly, but under the surface something strange is brewing on the island. What mysteries await him on this secluded summer island?”

Episode 4 “Jamais Vu” sees Shadow Ushio convinced that she is alive when she is a shadow that actually believes she is the real Ushio. Shadow Mio and now a Shadow Shinpei are causing chaos.  Summer Time Rendering is available for streaming on Disney Plus in Japan. 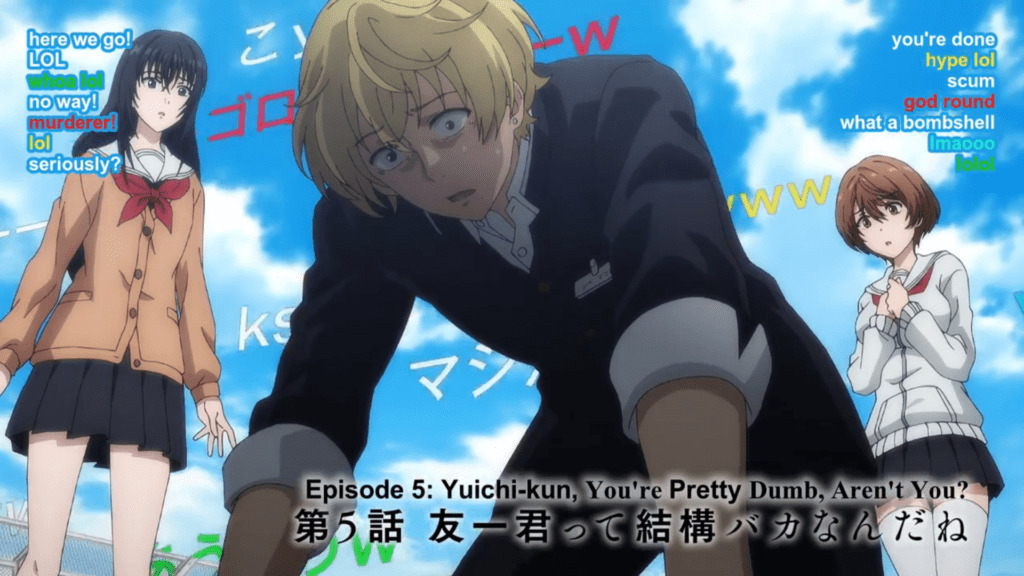 The synopsis for episode 5 “Yuichi-kun, you’re pretty dumb aren’t you?” provided by Crunchyroll states,”Shibe reels from the accusation that he has ‘actually killed a person.’ Despite protesting that he never did such a thing, he loses the audience’s confidence and is thrust into first place. Meanwhile, Tenji finds himself in a distressing situation after realizing Yuichi is the one who wrote the card. Yuichi then makes the shocking announcement that he knows who the traitor is.” 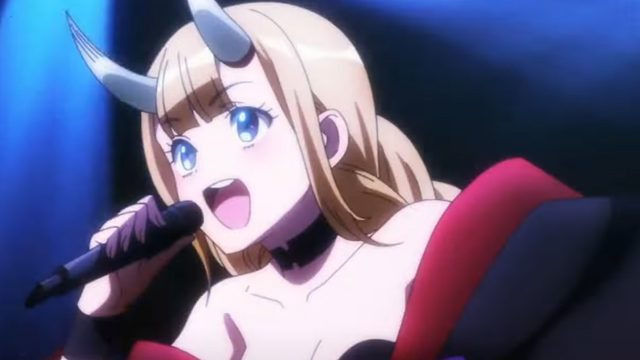 Ya Boy Kongming sees an ancient military strategist named Kongming arrive in modern Japan and uses his tactics to make his newfound friend Eiko into a music sensation.

The synopsis for episode 6 Kongming’s Freestyle provided by HDIVE reads, “Past and present collide when Kongming and Kabe face off in the most epic rap battle in history.”

4. Shikimori’s Not Just A Cutie 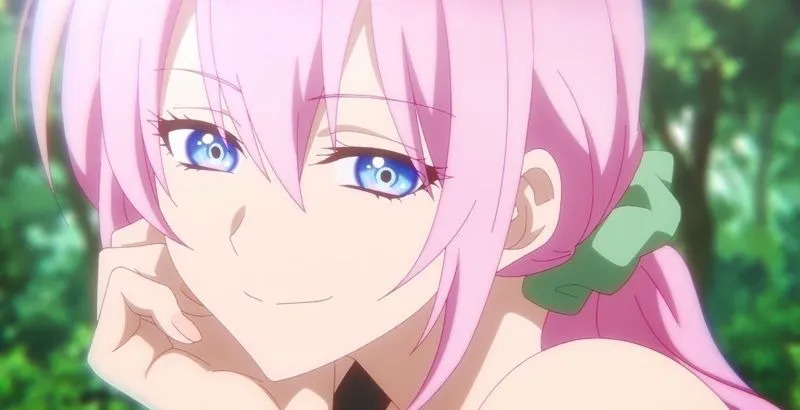 Shikimori’s Not Just A Cutie is a romantic comedy that follows high school student Izumi and his girlfriend Shikimori who has a beautiful smile, kind personality, and always seems to be happy alongside Izumi. However, when Izumi finds himself in trouble she transforms into a ‘hearthtrob girlfriend.’

The synopsis for episode 5 as noted by Crunchyroll states, “The naturally unlucky Izumi-kun faces yet another day of disaster after disaster. Even on his way to meet up with his girlfriend Shikimori-san in the morning, he runs into so many troubles that he’s a mess by the time he sees her. Still, the cute, sweet Shikimori-san greets him with a kind smile. But when Izumi-kun is in trouble, the lovely Shikimori-san instantly transforms into the coolest, most heroic girlfriend you’ve ever seen! Fun days are in store for this couple of 1000% preciousness and their chill friends as they begin their second year in high school!” 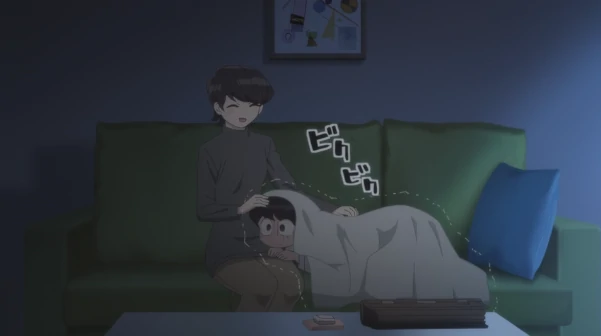 Episodes 1-14 are currently available to stream on Netflix. 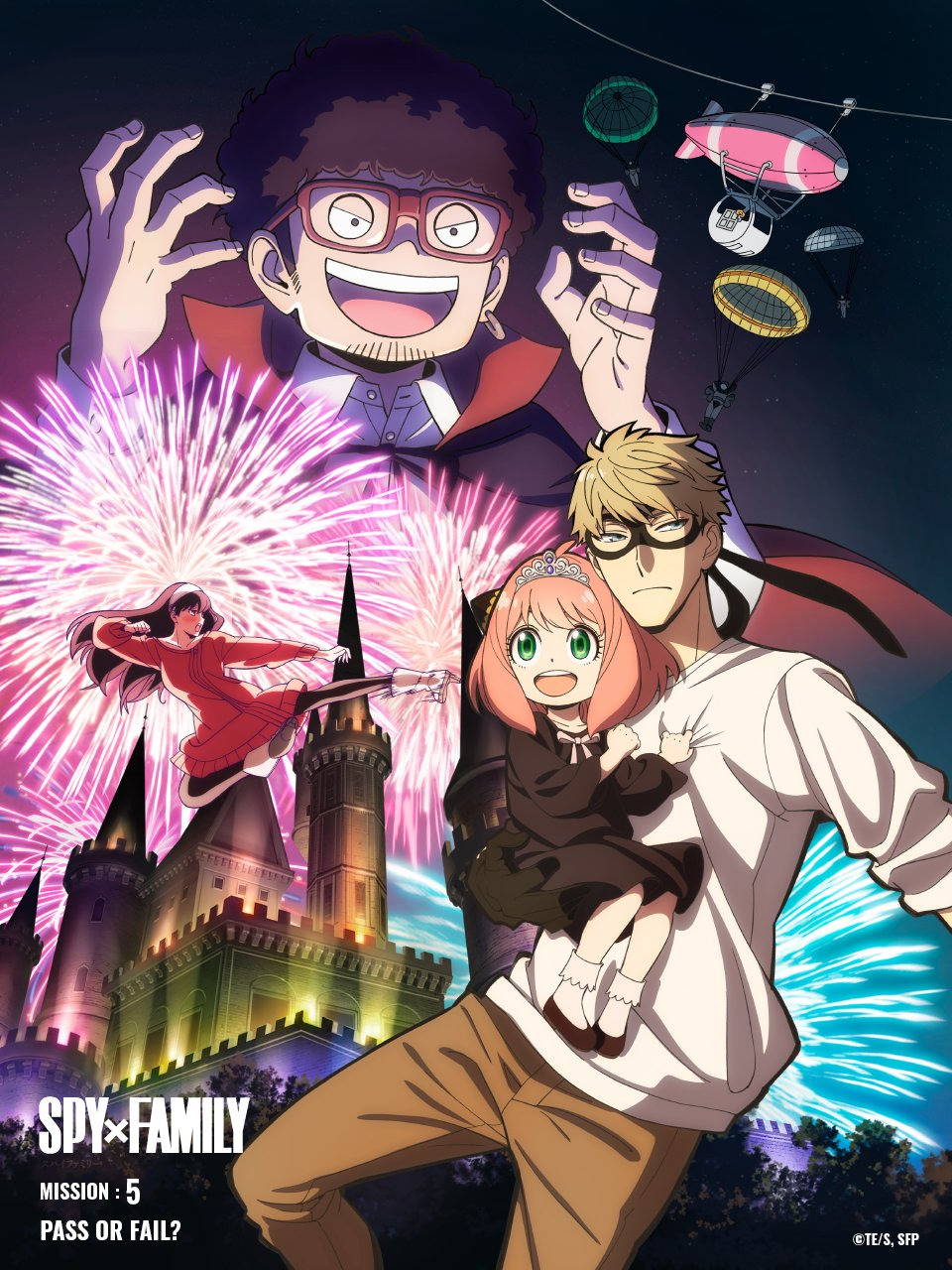 In order to track Desmond, he takes part in Operation Strix, which involves infiltrating Desmond’s social circles specifically the elite school he sends his son too. In order to accomplish his goal Twilight recruits a girl named Anya that he adopts as his daughter and woman named Yor as his wife. However, his daughter has the ability to read people’s minds and his wife is an assassin.

The three decide to go undercover as a family unit, but they also keep their abilities hidden from each other. Hijinks ensue with world peace resting in their hands.

The synopsis for episode 5 provided by Crunchyroll states, “The day that Eden College would announce the applicants that successfully got into the school had finally arrived, but Anya’s number is not listed. The Forgers fall into the depths of despair but are greeted by Henderson. He praises them for their interview and tells them that Anya is at the top of the waiting list. Three days later, they find out that Anya got into the school! Franky comes over to celebrate with the Forgers and they all agree to reward Anya for working so hard. What Anya asks for…” 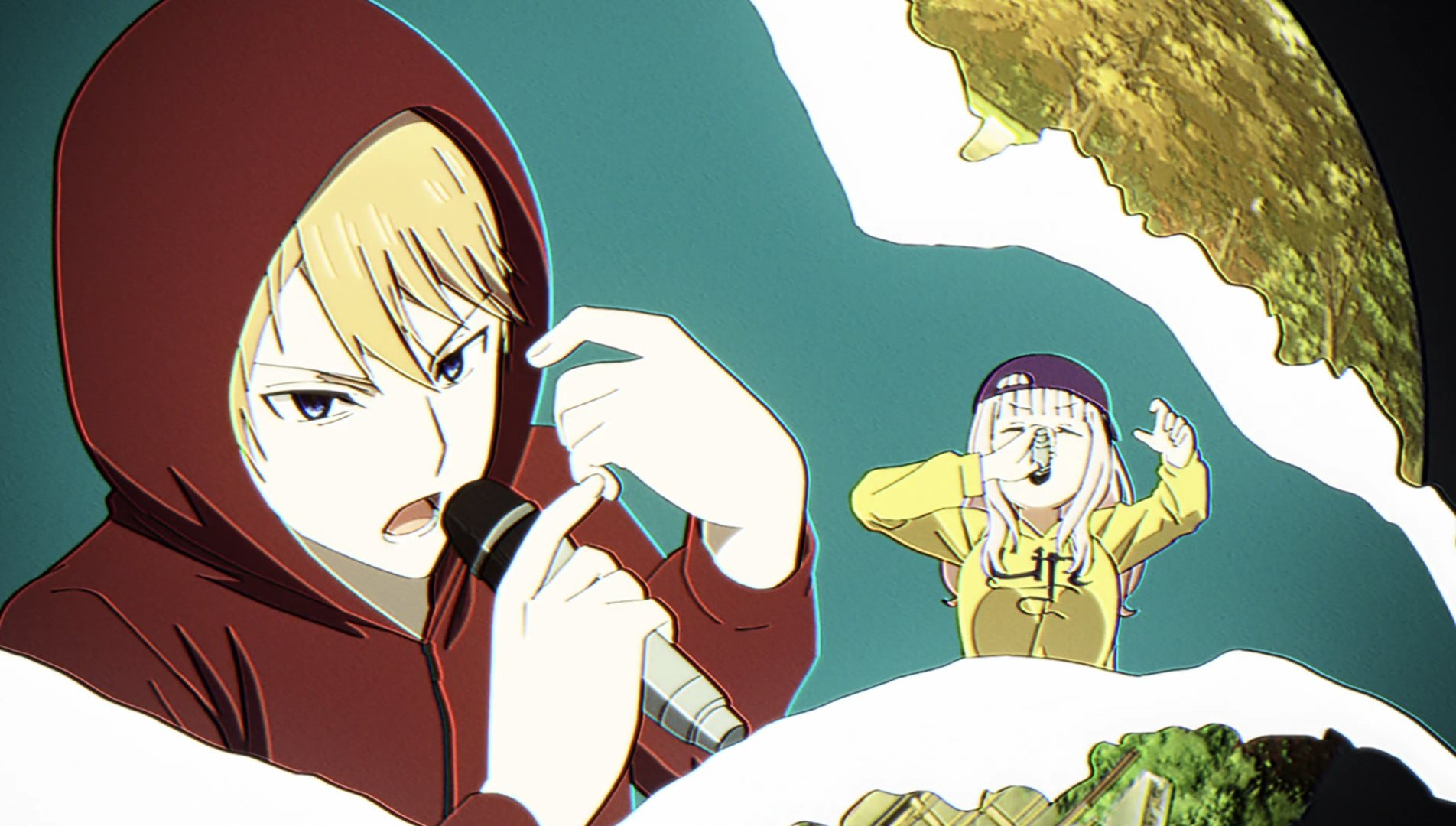 Kaguya-Sama: Love is War -Ultra Romantic- is a romantic comedy that follows the romance between the two leaders of the student council Kaguya Shinomiya and Miyuki Shirogane.

The official description from Crunchyroll states, “As the two leaders of the student council, Kaguya Shinomiya and Miyuki Shirogane have supposedly fallen in love… But after almost half a year, nothing has happened!? They both have too much pride and can’t be honest. Things have gotten troublesome, and they are now caught in a war of ‘How to get the other to confess their love first.’ This is a whole new romantic comedy, following an outbreak of cunning warfare between two elite students in love.”

The synopsis for episode 5  “Chika Fujiwara Wants to Beat a Rhythm / Ai Hayasaka Wants to Talk / Maki Shijo Wants Some Help” provided by Crunchyroll states, “Shirogane couldn’t tell Ms. Herthaka that sometimes humans need to expose their weaknesses and endeavors to practice rapping which should be able to convey that. But his rapping skills are catastrophic. Fujiwara, who previously taught him singing and dancing, tags along for practice. But she’s a total amateur when it comes to rap that she’s on the level where she’s convinced it’s all simple-minded puns. So Fujiwara begins special training. With the advice from Shirogane who has overflowing knowledge on rap music, she rapidly improves… But something is still missing!” 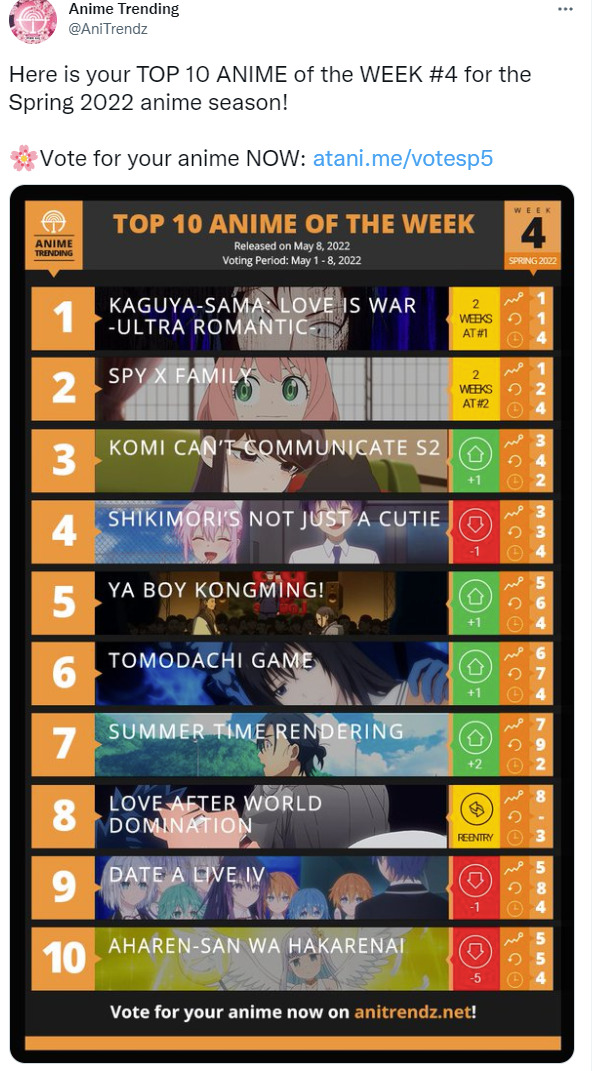 What do you think of the top 10?  Did the fans get it right? Are there any series you feel are missing such as Shield Hero, Ao Ashi or Couple of Cuckoos?

NEXT: 9 Ultra-Violent Japanese Anime Films From The 1980s You Need To Watch