Activision have come under fire after furry artist accused them of plagiarizing the design of a wolf-headed character skin in Call of Duty: Vanguard’s upcoming Floof Fury pack.

Concept artist Sail Lin shared on Twitter “I have to explain this matter, COD Vanguard Samoye skin plagiarism.” In their images shared they elaborated, “Hello everyone, I am saillin, I am the original artist that the upcoming COD VANGUARD Samoyed skin was plagiarized from. I only just found out at the time of the announcement that my work was plagiarized.”

The artist explained, “Even though I am a COD player, I am very disappointed to see my work being plagiarized by a big company like Activision in this way. I have reached out to Activision for an explanation and/or compensation, and hopefully the situation will be settled soon.”

“As an individual artist, I can only do so much,” Lin bemoaned, “and I have to speak out about this to stop things like this happening again in the future.” 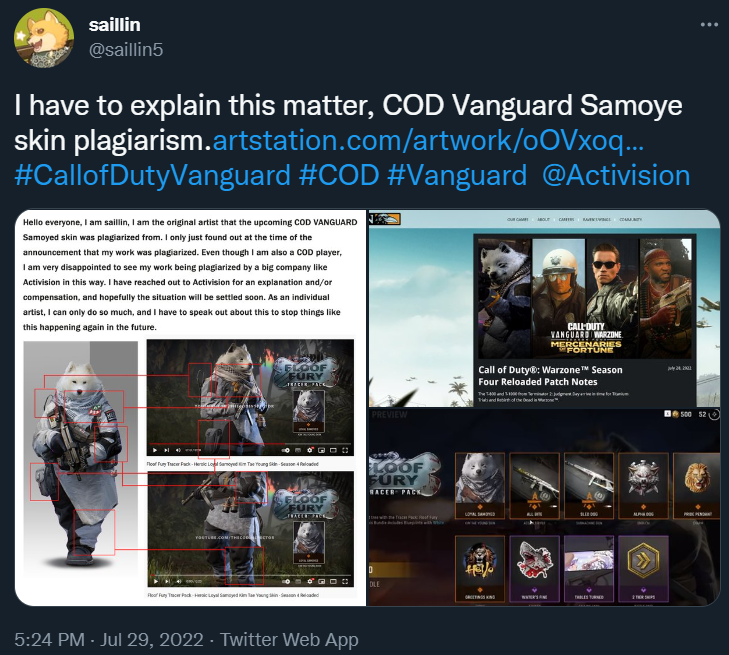 In a since-deleted trailer, and other in-game uploads, the Loyal Samoyed skin shows Kim Tae Young in a thick winter coat, scarf, and a dog’s head in place of a human’s. Lin notes the skin and their own art — as part of the Monster Army series featuring other animal soldiers — share similar placements of patches, elbow pads, pouches, an aerial coming out of the backpack, and similarly shaped dog head.

It also features a scarf with a checkered pattern and pale blue colored coat. In fact, the only major difference would be the dog head; pure white in Sale Lin’s art, while grey with a white face and tactical paint under the eyes of Activision’s skin. 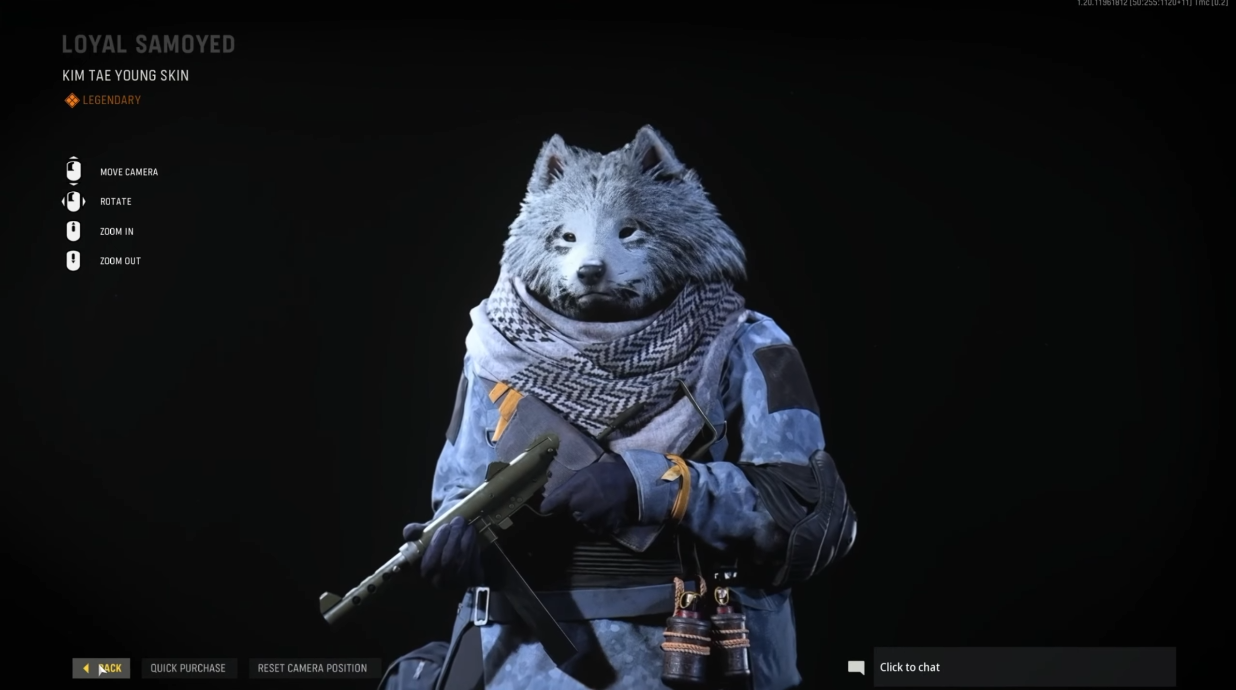 Lin also highlighted how the skin had appeared in a blog post on Raven Software’s website (it should be noted Call of Duty: Vanguard’s main developer is Sledgehammer Games). While the post didn’t discuss the new skin, the post currently has a different header image without the Loyal Samoyed skin.

Lin’s original post currently has almost 8,500 retweets, over 420 quote retweets, and has been liked more than 32,000 times. If the sudden removal of trailers and images weren’t enough indicators, it seems Activision was made aware of the accusation.

“Activision has contacted me, and I hope to have a result as soon as possible,” Lin tweeted just three days after bringing the matter to the public’s attention. “Thank you for your concern.”

Back in 2021, Activision advertised the Notice Me IV pack for Call of Duty Mobile — a DLC pack with anime themed items — allegedly utilizing plagerized anime artwork from Goblin Slayer and Japanese artist Poppuqn.

As for Call of Duty: Vanguard, the game may have gone to the dogs in more ways than one. Activision Blizzard recently blamed the game’s lackluster sales on it’s WWII setting that “didn’t resonate with some of our community.” User reviews on Metacritic cited a nonsensical and short story, boring level and map design, brain-dead AI, and a general sense of the game being poorly made.

In fact, the WWII setting being so inaccurate was a sticking point according to fans, ranging from full blown tokenism and a “woke” agenda to anachronistic vehicles and uniforms. The game’s DLC — offering skins including the Terminator and the aforementioned dog head — would seemingly be only making the latter worse. 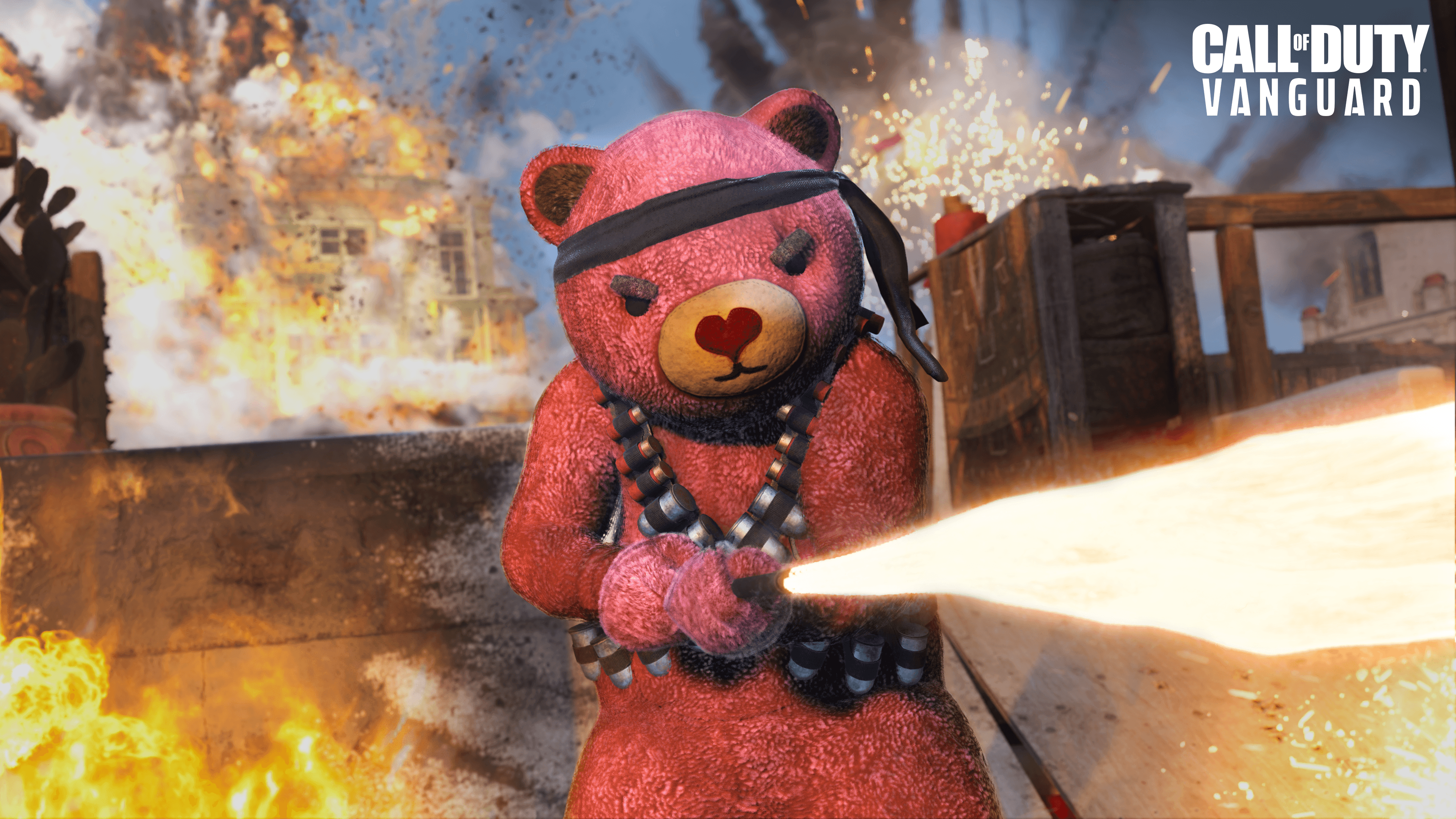 NEXT: Melanin Gamers Launches The Watch, “A Digital Community Watch Designed To Eliminate Racism In The Gaming Community”