Former Polygon editor Ben Kuchera has claimed his and other reviews were re-written by the outlet’s Editor-in-Chief during an alleged breakdown. During this, he claimed those who believed in corruption in games media and journalism — such as GamerGate — were right. 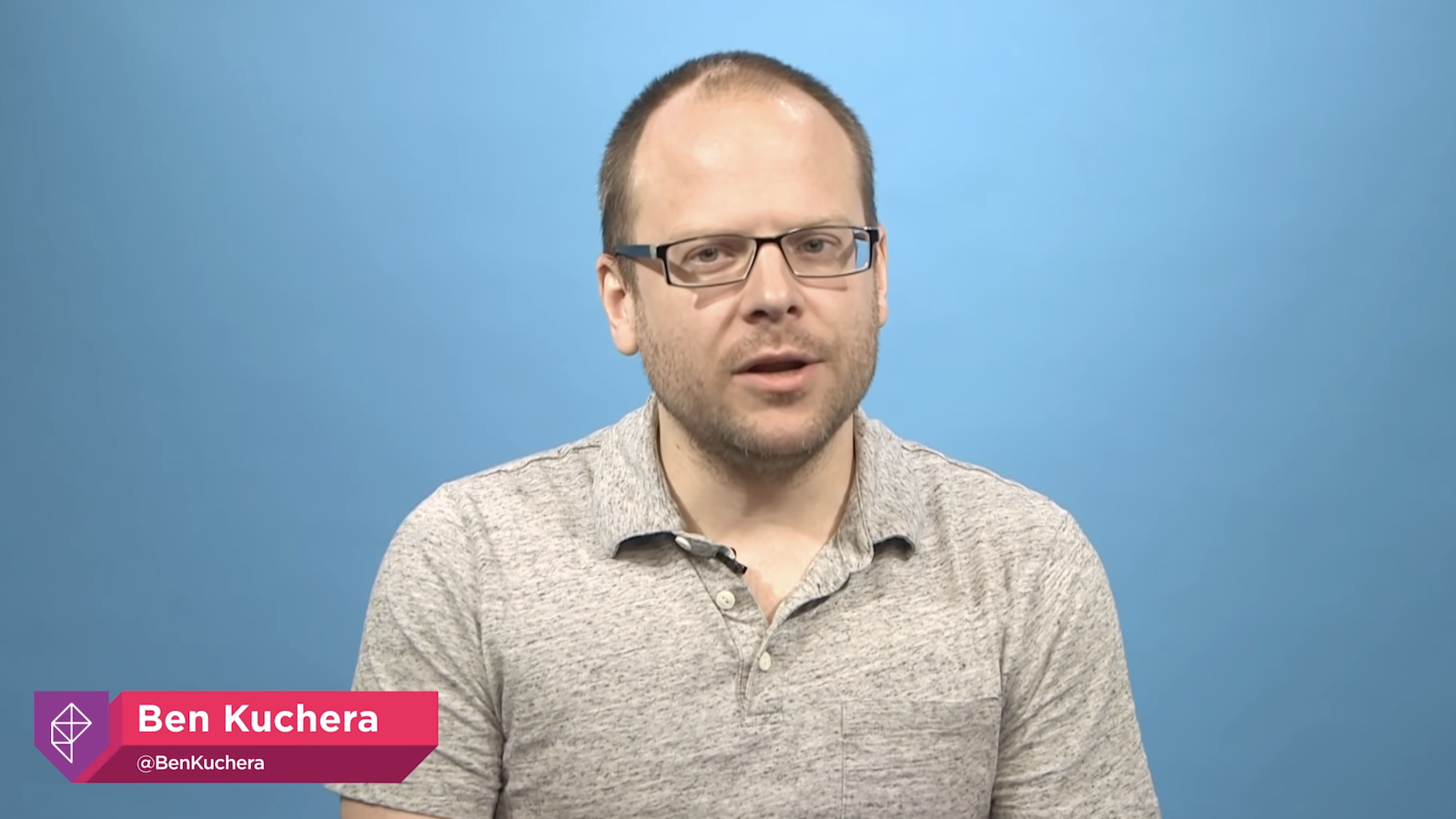 Around the beginning of August, Kuchera had been tweeting about game journalist’s poor pay- roughly starting from the 2nd. On August 6th, Tennessee Representative Mark Green discussed the claims of the US economy being in recession, with 60% of families allegedly living “paycheck to paycheck.” He placed the blame squarely at the feet of “radical leftist policies” as Democrats alleged seek to raise taxes.

“I remember hearing the same thing when we were going through the union negotiations at Polygon,” Kuchera claimed. “‘The union just wants more of your money.’ Anyway, once Vox Media was unionized I got a nice, big raise. It’s still my base asking price! Leftist policies get you more money.” 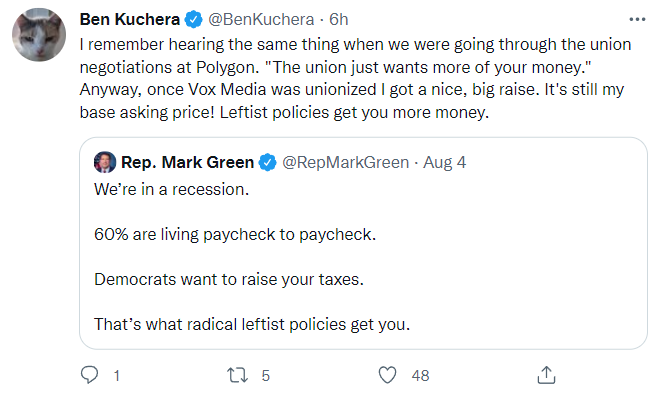 “If I remember correctly my union dues were 1% or 2% a year,” Kuchera claims, “and I think once we were unionized I got a 6% or 8% raise? I left Polygon making somewhere around $107k a year. You have every reason to unionize your newsroom.”

It would also appear this is Kuchera’s first time confessing to no longer be working at Polygon, his last works being published around April 2021, though rumors and speculation claimed he had been replaced by Polygon Deputy Editor Maddy Myers at some point in 2020.

Kuchera then makes several sarcastic tweets about how people should vote Republican if they want less money or for their CEO to make more.

Later the former Polygon editor boldly states “If an outlet asks you to run reviews for less than six figures, SAY NO. They have the money, that’s what the position is worth, you have to factor in death threats and harassment. If you’re heading a review division and you’re making less than $100k contact a union NOW.”

He then claims “Vox Media already laid off my union rep, so I’m not sure who to speak to if these salary expectations aren’t met,” but continued to advocate for people to demand better pay, even contacting him. After this however is where things get messy.

“But for real, if you want to know about @MIDImyers [Polygon Deputy Editor Maddy Myers] taking away time to be vaccinated, reach out. I h’re ave [sic] screen grabs,” Kuchera claimed. “I’m tired of these corporate stoooges [sic] claiming they’re on your side.”

After this, Kuchera begins a 4-hour rant (read upwards from here). Judging by the occasional poor spelling, as well as repeating some points over and over, some believed Kuchera was either drunk or going through a nervous breakdown or psychotic episode. Nonetheless, Kuchera makes several damning claims against his former employer, including Polygon Editor-in-Chief and Co-Founder Chris Plante.

RELATED: Former Biden Disinfo Board Director Nina Jankowicz ‘Likes’ Twitter Thread Blaming Gamergate For “Almost Everything Terrible That Has Happened In The Past Several Years”

“So when Chris Plante and Maddy Meyers[sic] decide my scores aren’t allowed, you have to ask yourself who these people are protecting,” Kuchera pondered.

“I’m just tired of being told to adjust my review scores by @Polygon people who they think they have power over me,” the former Polygon employee claimed. @MIDImyers threatened my job because I got the vaccine, and later the company told me I was gone.”

“I’m getting so many messages about corruption in games media, and these folks are right,” Kuchera later admits. “@MIDImyers hides reality because it makes them money, and Chris Plante has told me they won’t help. Money is what matters to them, not humans.”

As aforementioned, Kuchera initially claimed he was not given time off for having a COVID-19 vaccine, either unwilling or unable to make up the time, and that this ultimately led to him being fired for “violation of corporate policy.”

Prior to this he had alluded to “no one at Polygon is willing to stand up for women’s rights,” and employees being “too scared of being fired to stand up for what’s right.” Kuchera later claimed that he had not been given time off work to care for his daughter in the aftermath of being sexually abused.

“All @MIDImyers and Chris Plante had to say was ‘tough luck,'” Kuchera alleged, further claiming that along with Polygon management being unsympathetic and offering no assistance, him requesting for help was what got him fired. 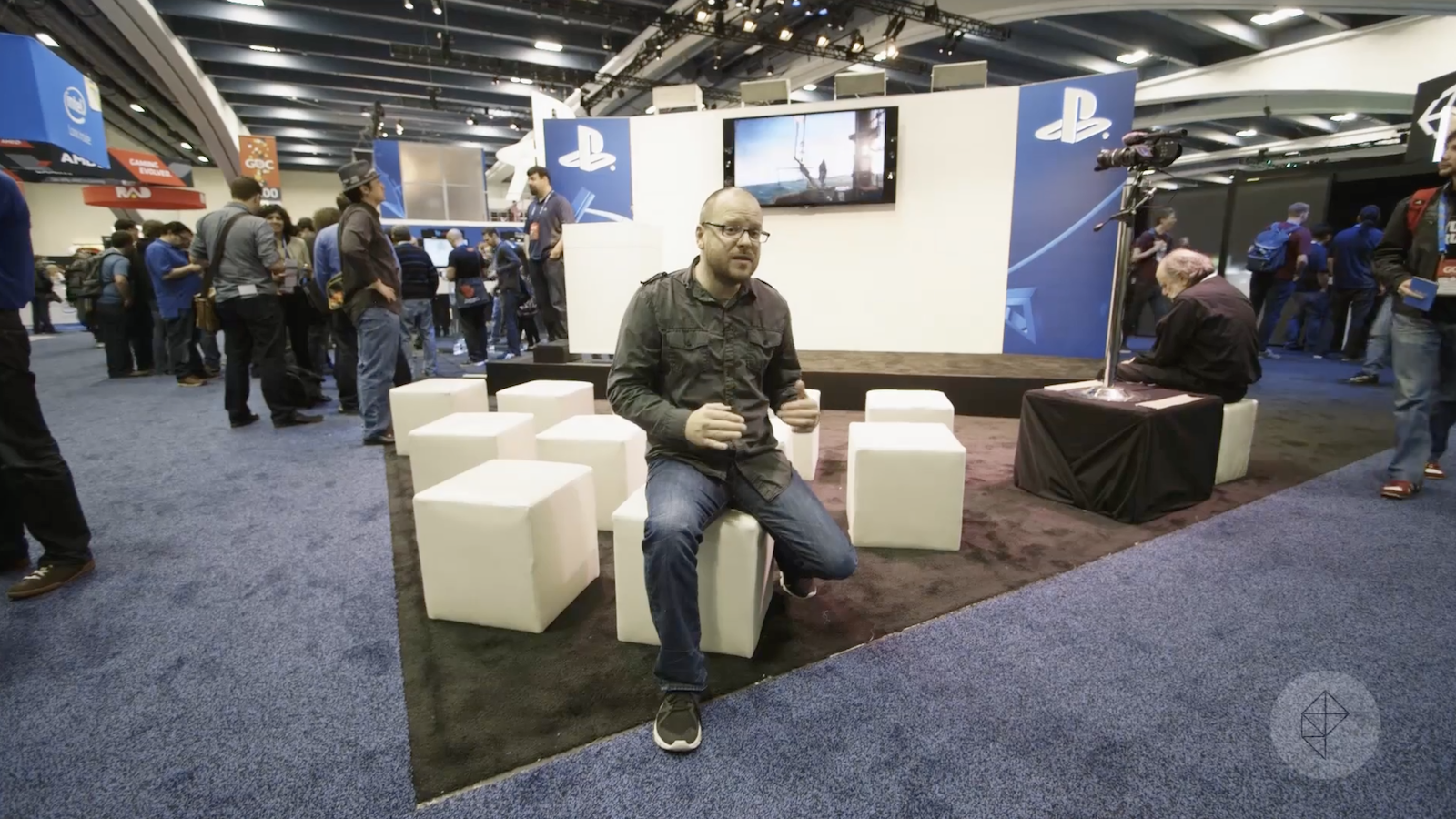 In total, Kuchera refers to being fired due to taking time off for the COVID-19 vaccine an additional 7 times, fired over taking time off to support his children 23 times, and reiterated Plante was re-writing and re-scoring reviews 12 times- not including replies he made to other Twitter accounts.

His mental state can make some comments hard to judge the validity of, though Kuchera was clearly incensed over what would be understandable circumstances if true. Across the rant, Kuchera also at times claims it was his children being vaccinated– though it’s possible this was done at a similar time to his own. 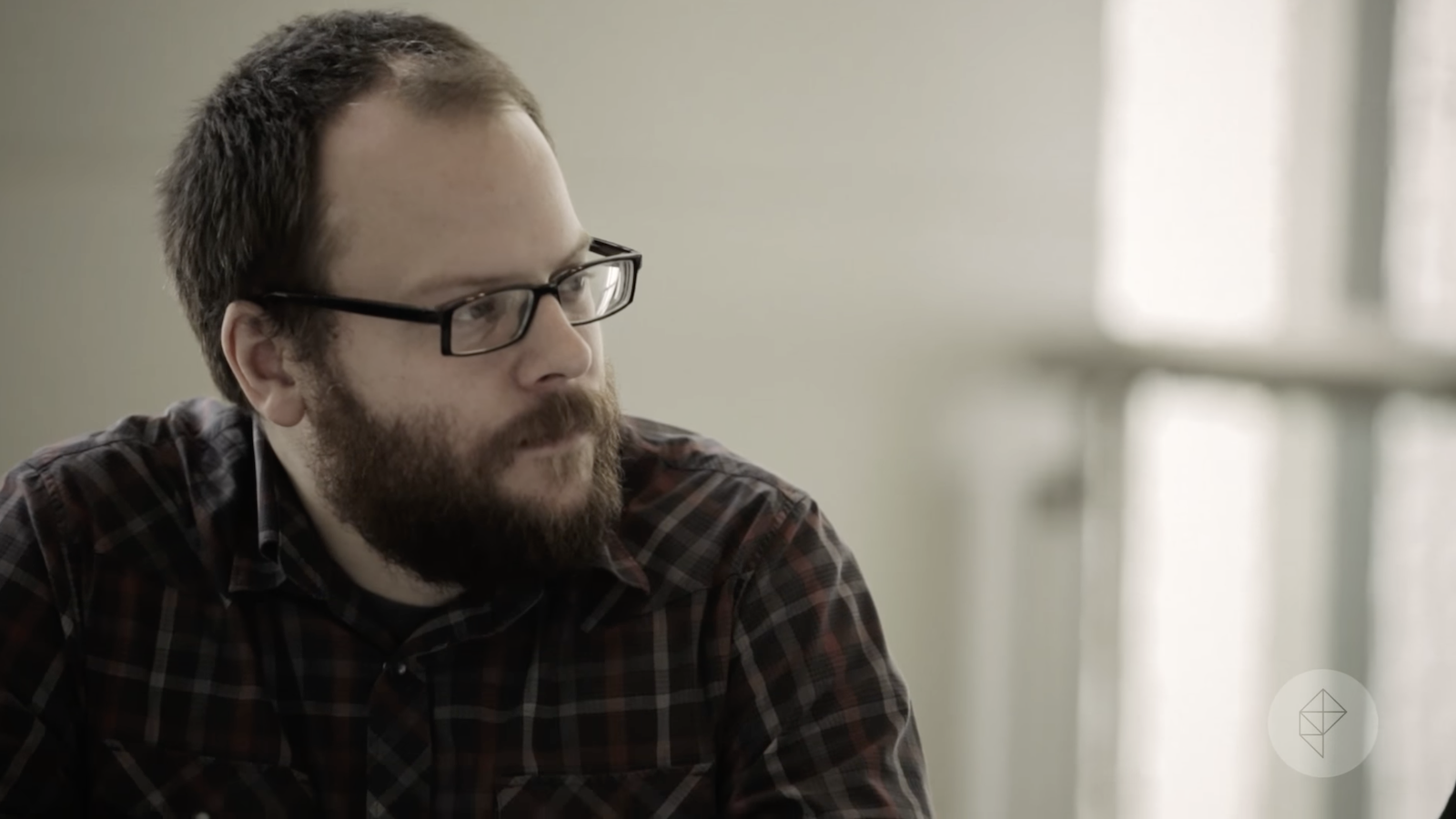 Likewise, Kuchera’s allegation that Plante was “threatening my family if I don’t take Vox Media’s bribe money,” could have meant him being threatened with termination. His claim “Vox Media has been threatening me doing so [caring for his children] for months” suggests he was given months of leeway to make up his time.

He also claimed to have screenshots proving “Polygon threatening writers” along with court documents confirming he told his superiors about his daughter’s abuse, coupled with the fact that HR did nothing when they were told and that Myers blamed Kuchera for the abuse that befell his daughter.

Kuchera often used the plural “children” rather than a singular child and referred to the abuse as though it was ongoing. “So it’s rough when my co-workers tell me they’re going to get rid of me for getting vaccinated, it’s hard when my people I thought were friends told me I better let my daughter be sexually abused if I wanted to keep my job,” he alleged. “I can’t begin to describe what that feels like.”

Later, Kuchera also claimed being in an abusive relationship and subsequent messy divorce were “a weapon they [Kuchera’s coworkers] used against me,” and “Polygon saw this as a great opportunity to force me out, and side with my abuser.” The former Polygon editor threatened legal action against Plante multiple times as well.

He would later delete nigh-all of his tweets, leaving only a few retweets from this year, 2011, and 2012. Kuchera made several new tweets, addressing the prior 24 hours. “I am figuring so much s—t out in real time during incredibly stressful circumstances and I’m working on giving myself a little more grace, because so many of us are barely hanging on. Working on it. Appreciate you all.”

“PTSD is horrible and sometimes that’s how it manifests and if you have any idea how to curb that I am literally all ears,” Kuchera begged.

“I had a scary, sustained panic attack yesterday,” he claimed. “I’ve gotten in touch with my doctor and we’re doing a phone session today, and I’m taking something safe to calm down a little. I’m still pretty rattled, but I’m OK. I appreciate people checking in.”

“I’m going to take a break from Twitter for a bit, we’re all under so much stress right now due to literally everything and this site is not helping. Be kind to yourself and each other, it’s rough right now in a lot of ways for a lot of people,” the former Polygon staffer concluded.

So, why should we take Kuchera’s comments about games corruption as true if this is it was born of a panic attack? Because, rather than confirmation this was happening at Polygon, this is merely reaffirmation as we already knew it was, in a way.

In 2014, the former Polygon editor had written about game developer and later activist Zoe Quinn and her game Depression Quest, failing to mention he was giving her money via Patreon; leading to a conflict of interest. After Quinn’s ex-boyfriend had revealed she had cheated on him with others, including several journalists who had praised her game in their press, this kick-started GamerGate.

Despite the group’s insistence of standing to expose unethical behavior in games journalism — which at the time was already being lambasted as acting as a soapbox and rejecting ‘offensive’ games in favor of politically motivated indies — Kuchera dismissed them in several reports and editorials as a harassment campaign against women; as had many others. Admittedly, he had claimed to being swatted by the group. 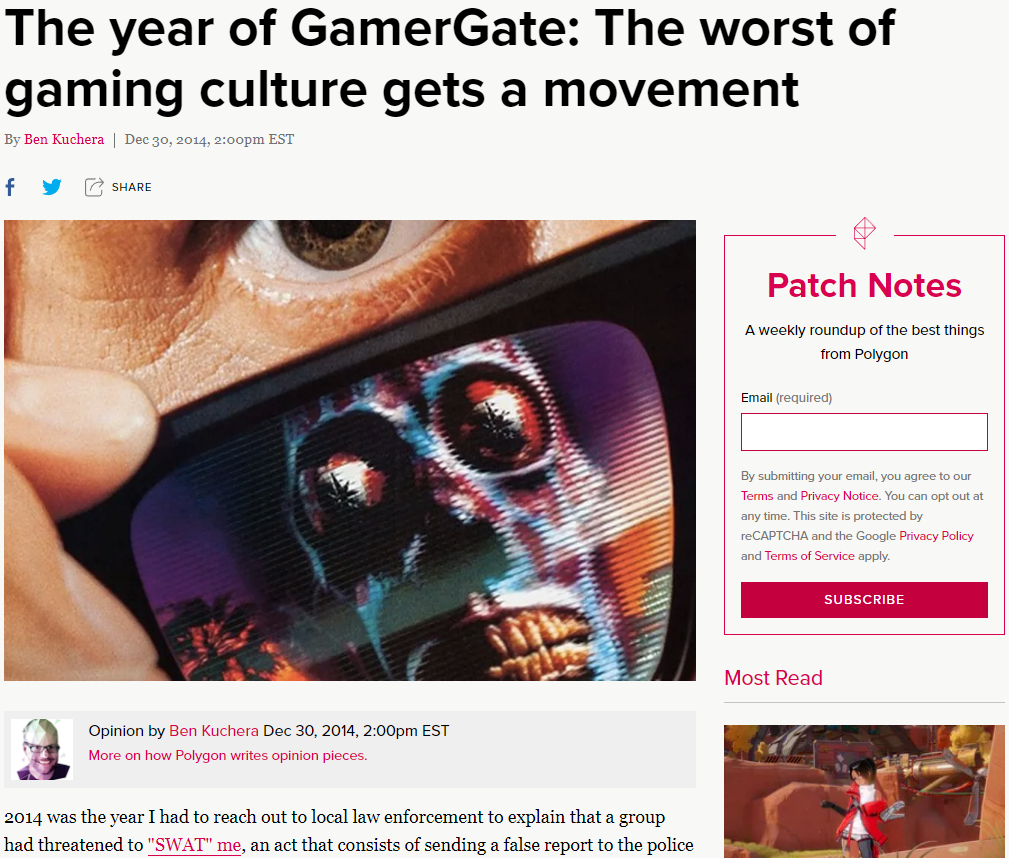 Source: The year of GamerGate: The worst of gaming culture gets a movement, Ben Kuchera via Polygon

It seemed Kuchera doth protest too much. Not only had he reported on the claims of sexual harassment against Stardock CEO Brad Wardell without due diligence and framed as fact — allegations later rescinded by the accuser — but he was exposed as having colluded with other games journalists, one of GamerGates many allegations against the industry.

In September 2014, journalist Milo Yiannapoulus published Exposed: the Secret Mailing List of the Gaming Journalism Elite. Therein he revealed GameJournoPros, a private Google Groups mailing list made of editors and writers of numerous major gaming and even mainstream news outlets, which included Polygon and Kuchera himself.

Across multiple Breitbart articles and his own blog, Yiannapoulus revealed those journalists had colluded to push an anti-GamerGate narrative — as evidenced by the multiple “gamers are dead” articles released on the same day — and how to promote Quinn’s work. Kuchera also wielded some influence,  helping other members find work, such as Ars Technica Senior Editor Kyle Orland. 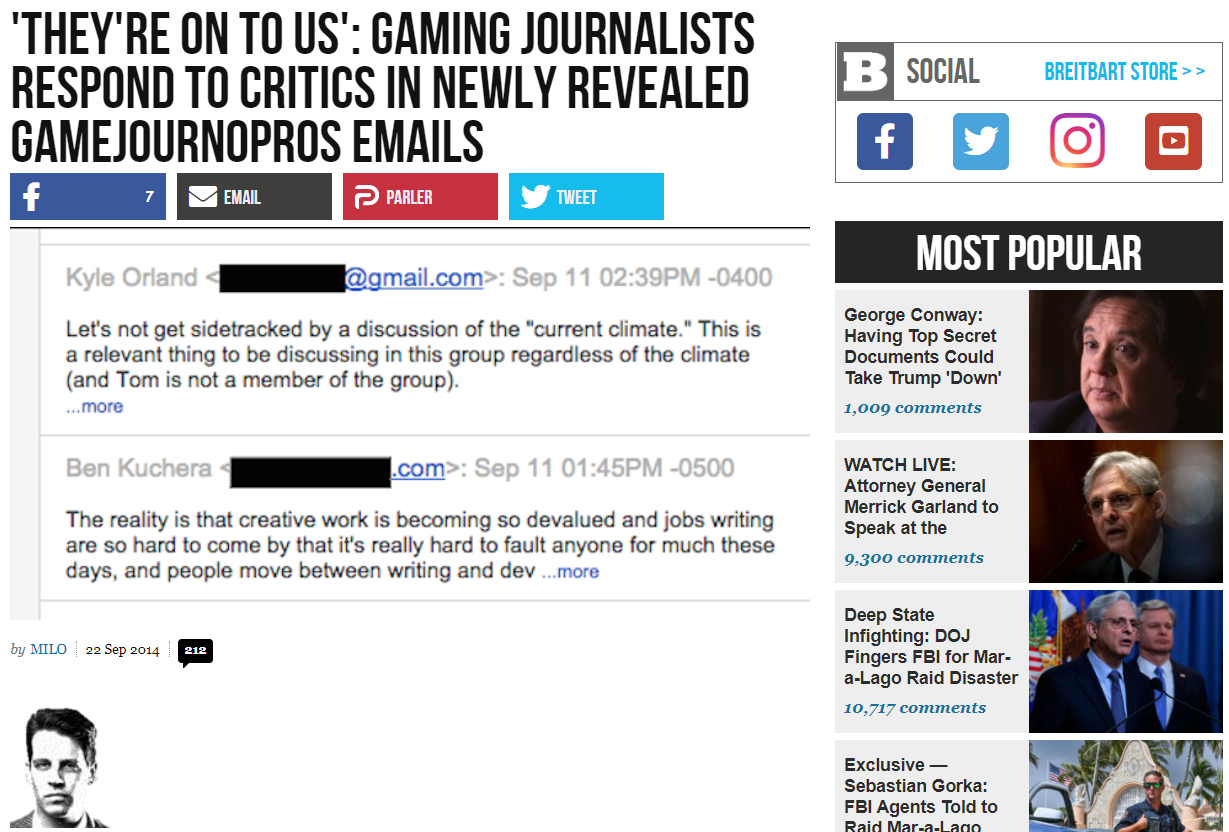 Source: ‘They’re On To Us’: Gaming Journalists Respond to Critics in Newly Revealed GameJournoPros Emails, Milo Yiannopoulos via Breitbart

Though Kuchera claimed to have been harassed by Gamergate, he would later state he wasn’t receiving messages in the GameJournoPros chat logs, along with other ethical violations being gradually exposed and cataloged, and with Polygon as a whole.

While GameJournoPros shut down around October 2014 (more on GamerGate’s history here), and Kuchera’s other ethical violations were documented, he would admit to other’s corruption in gaming journalism in 2021. He claimed that while he was working at Penny Arcade, they “killed stories to protect their business.”

In a similar rant last year, Kuchera claimed that questioning these practices cost him his job there. He had seemingly been belittled by his colleagues for both wanting to pursue the truth and opting to spend time with his family instead of producing more content. What seemed to prompt this was “Seeing folks working for them question the integrity of the gaming press in public makes me literally ill,” Kuchera tweeted at the time. 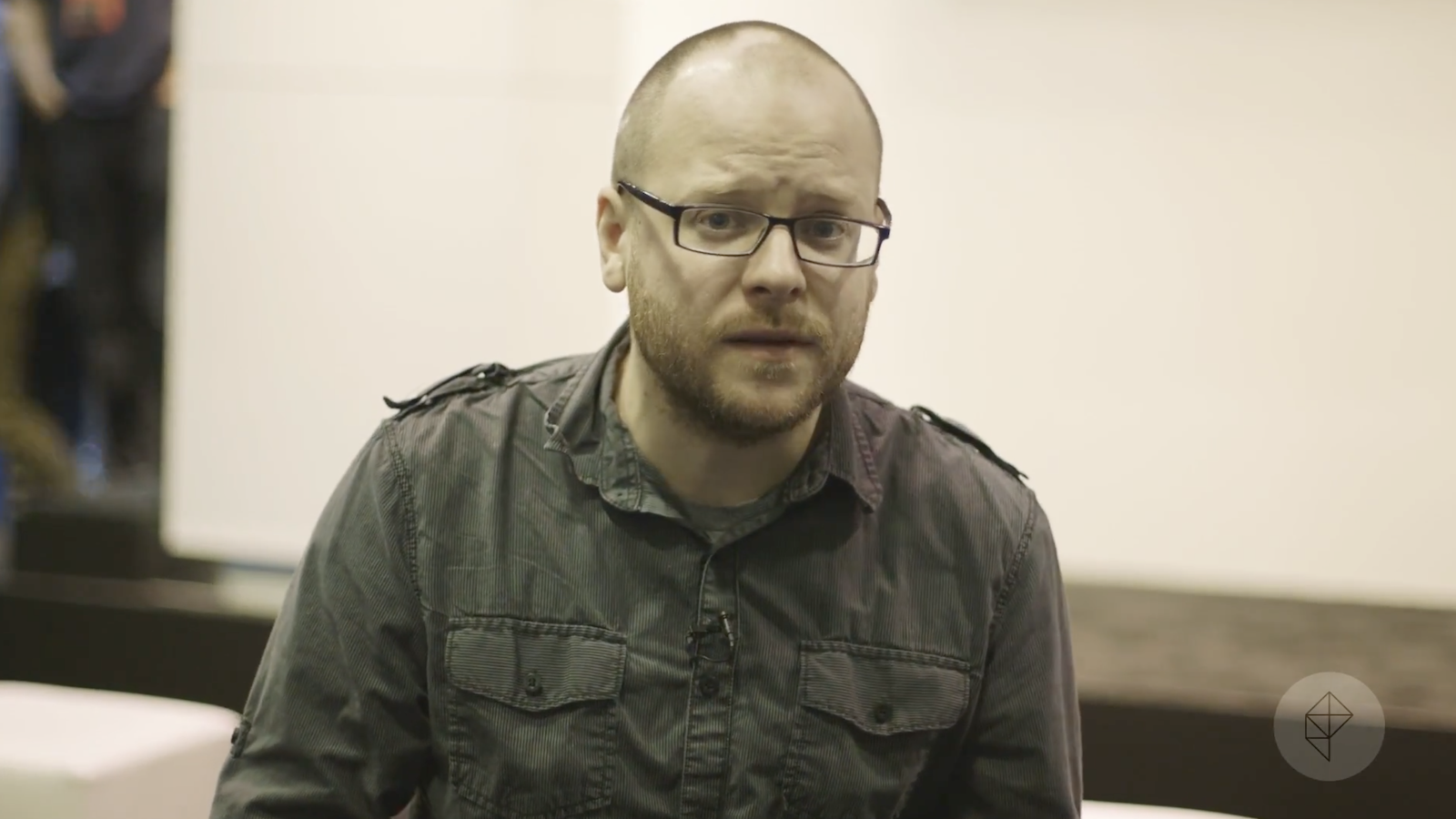 Did Kuchera actually expose Polygon’s unethical behavior? Or was this a mind under great stress vociferating what others wanted to hear? Let us know what you think in the comments below!