Progressives on social media spent Saturday afternoon attacking actress Sydney Sweeney and her family for appearing to be “right-leaning” in a recent string of photos the star posted celebrating at her mother’s birthday. 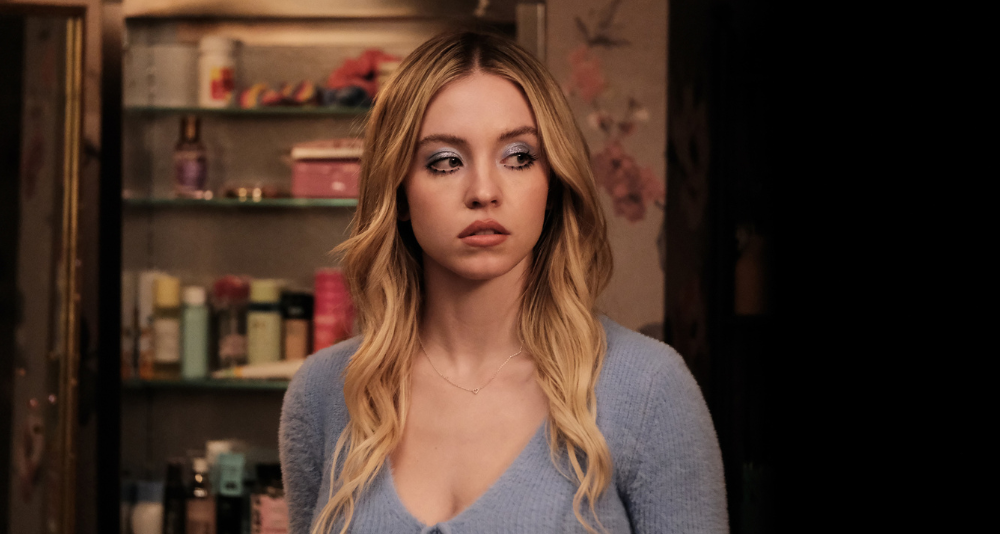 Sydney Sweeney is set to star in the latest Spider-Man spinoff film film Madame Web alongside Dakota Johnson. She has also earned an Emmy Nomination for her roles in the HBO series The White Lotus.

Over the weekend, she went to her family’s home state of Idaho to celebrate her mother’s 60th birthday with various members of her family including her brother in a hoedown-inspired party full of cowboy hats and boots.

Sweeney captioned a post with photos and video from the festivities. “No better way to celebrate my momma than a surprise hoedown.”

RELATED: ‘The Batman’ Star Zoë Kravitz Speaks To Facing Internet Outrage For Criticizing Will Smith’s Oscar Slap: “It’s A Scary Time To Have An Opinion Or To Say The Wrong Thing”

However, some of the photos inspired numerous social media users to attack her and her family. Sweeney was the top trend on Twitter with many labeling her and her family “racist” for what they wore at the event.

Attendees at the party wore MAGA-styled parody hats stating “Make Sixty Great Again” in honor of her mother which angered social media users for being too closely associated with former President Donald Trump.

Twitter user ierickcordova tweeted, “Lol not Syndey Sweeney hanging out with her blue lives matter, maga hat wearing family. Everyone claims to be progressive & allies but go home to their raggedy racist families with the excuse ‘they’re still family’. 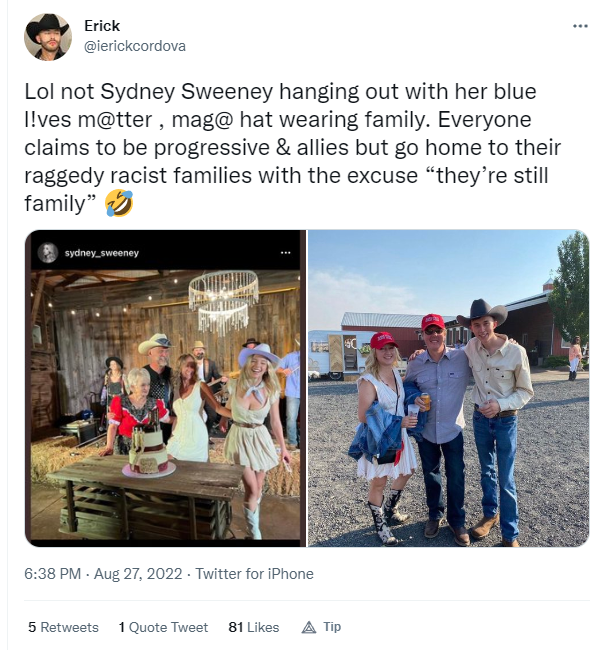 Social media users also complained about one of the attendees, presumably Sweeney’s father wearing an American flag-styled Thin Blue Line shirt which lead to Twitter users calling the actress’s family racist and comparing them to the January 6th protestors.

One user, exposedxbihh, specifically zoomed in on his shirt and wrote, “omg he wore that on her birthday too this is not a good look.” 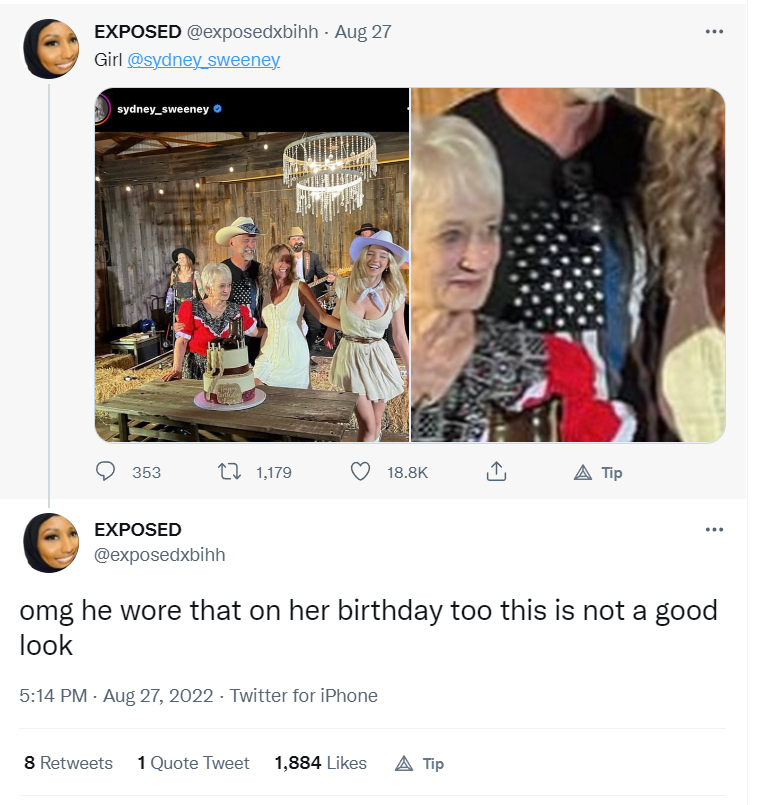 Another shared a clip intimating she and her family engaged in the protest on January 6th writing, “sydney sweeney when u ask where her n her family were on jan 6th 2021.”

sydney sweeney when u ask where her n her family were on jan 6th 2021 pic.twitter.com/Hg93co0sFM

After trending for a few hours, Sweeney herself posted on Twitter to dismiss calls of racism made against her family.

“You guys this is wild. An innocent celebration for my moms milestone 60th birthday has turned into an absurd political statement, which was not the intention. Please stop making assumptions. Much love to everyone ♥️ and Happy Birthday Mom!” 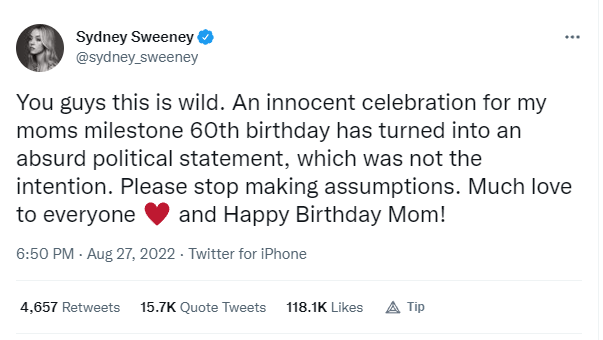 Progressives on social media did nothing to slow down their attacks and only doubled down on calling Sweeney’s family racist.

One Twitter reacted to her post by saying “just say you a part of a racist family and move on.” 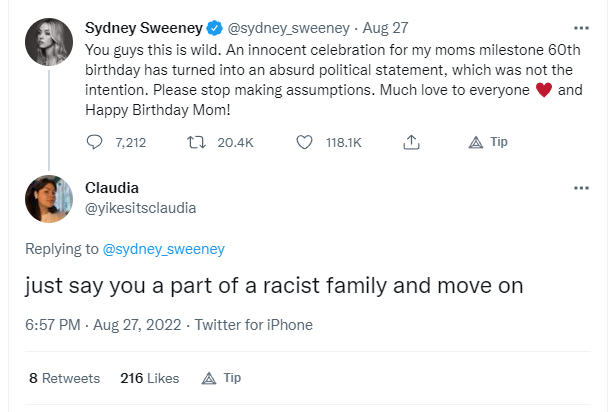 Another Twitter user blamed Sweeney along with other “rich white people.

“Rich white people will make ‘innocent’ and ‘light-hearted’ jokes out of violent political dogma and symbolism because it literally does not affect them. The plight and oppression of marginalized groups is nothing more than a depressing post they have to scroll past on their feed.” 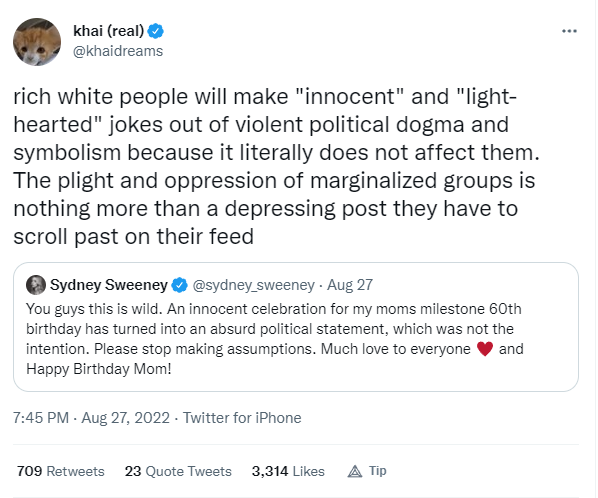 Another user stated she can no longer support Sydney due to the pictures and called her family racist. “Nah I’m sorry I can’t support someone who has a racist family either.” 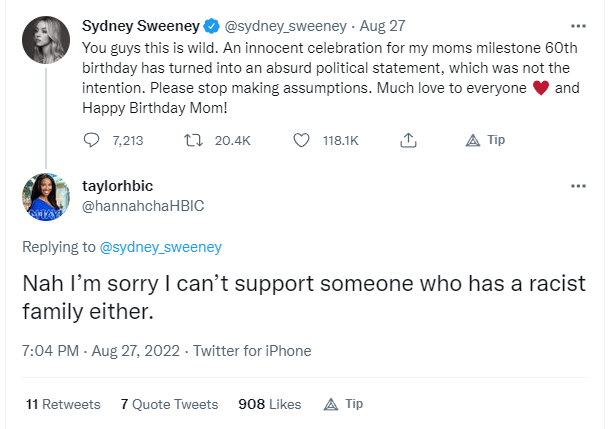 Another user shared their enthusiasm for the attacks on Sweeney. The user wrote, “seeing sydney sweeney get jumped is beautiful. if you’re white and unwilling to completely shame your parents for their conservative views, you’re just as complicit and need to be escorted out.”

In a subsequent tweet the user wrote, “your ‘love’ for your parents being at the expense of marginalized people is fucked up. hold that love while holding them accountable is one thing. ignoring that shit and pretending it’s not deep is another. f*** her, period.” 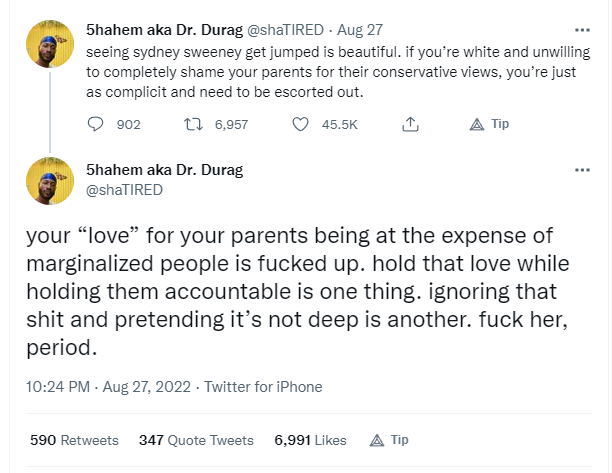 Last month, Sweeney talked about how hardships early in her career took a toll on her family’s life and how she worked hard to give as much back to them as possible.  “We lived in one room. My mom and I shared a bed and my dad and little brother shared a couch,” she explained.

Sweeney wanted to repair their relationship but lacked the early success that kept her from achieving that goal. “I thought that if I made enough money, I’d be able to buy my parents’ house back and that I’d be able to put my parents back together, but when I turned 18, I only had $800 to my name. My parents weren’t back together and there was nothing I could do to help.” 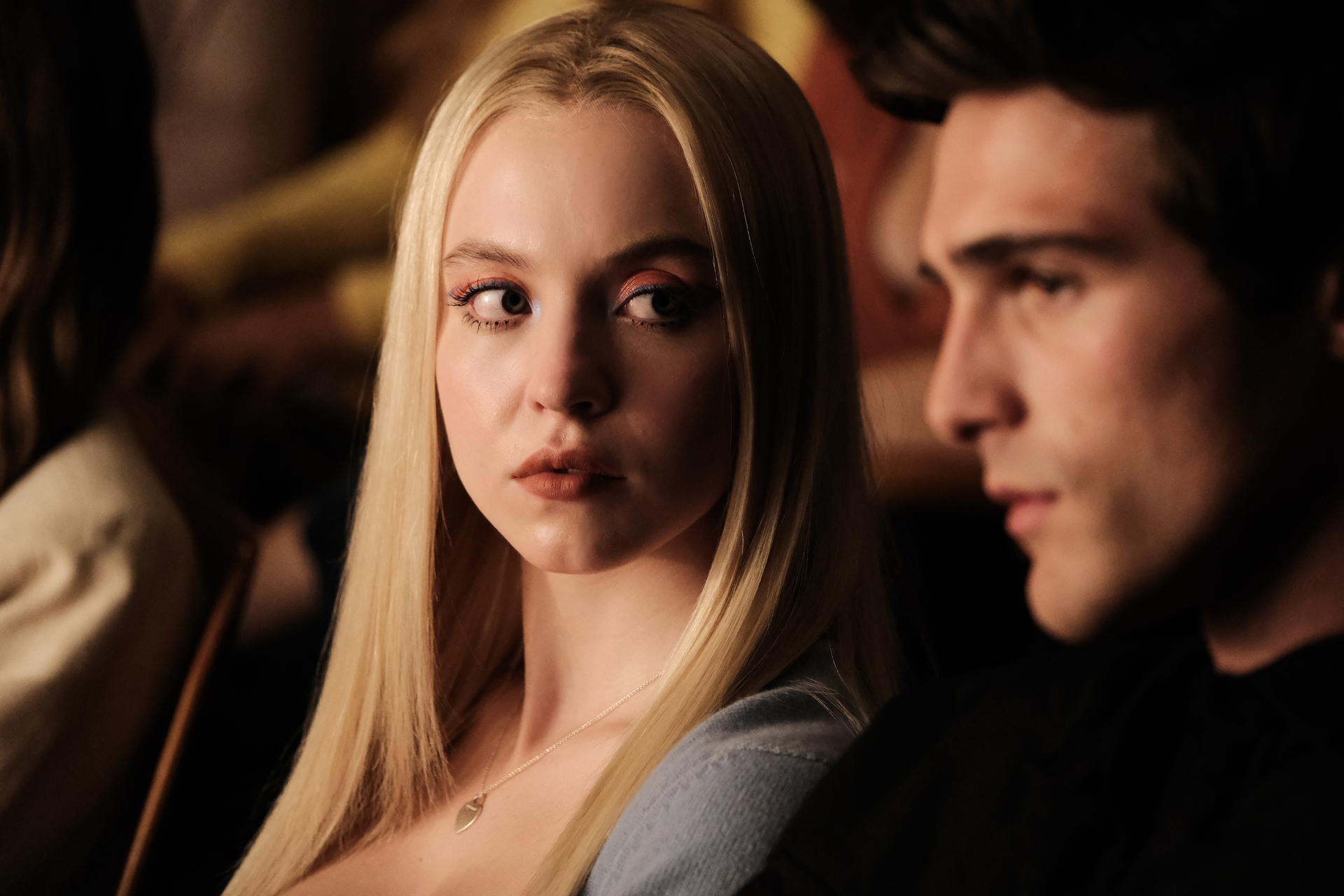 What are your thoughts on progressive Twitter’s attacks on Sydney Sweeney’s family?

NEXT: Actress Sydney Sweeney: “I Want To Have A Family, I’ve Always Wanted To Be A Young Mom”