Having given a significant portion of their careers to going where no man has gone before, it’s only fitting that Star Trek legends Nichelle Nichols and DeForest Kelley, who respectively portrayed Lieutenant Uhura and Dr. Leonard “Bones” McCoy in the original series, will have their ashes laid to rest amongst the stars.

Nichols and Kelley are set to fly off into the unknown together aboard memorial space flight company Celestis’ inaugural ‘Voyager’-level offering, named The Enterprise Flight in honor of its prestigious guests, which “will launch from planet Earth and travel beyond the Earth-Moon system, beyond the James Webb telescope, and into interplanetary deep space – where it will join the other planets, moons, comets, and asteroids in our solar system on a never-ending journey through the cosmos.”

However, the two Enterprise shipmates will not be alone in their journey, as “aboard Enterprise, fittingly, will be [series creator Gene Rodenberry] and several cast members of the original Star Trek television series, as well as an Apollo-era astronaut, together with people from all walks of life, interests, and vocations.” 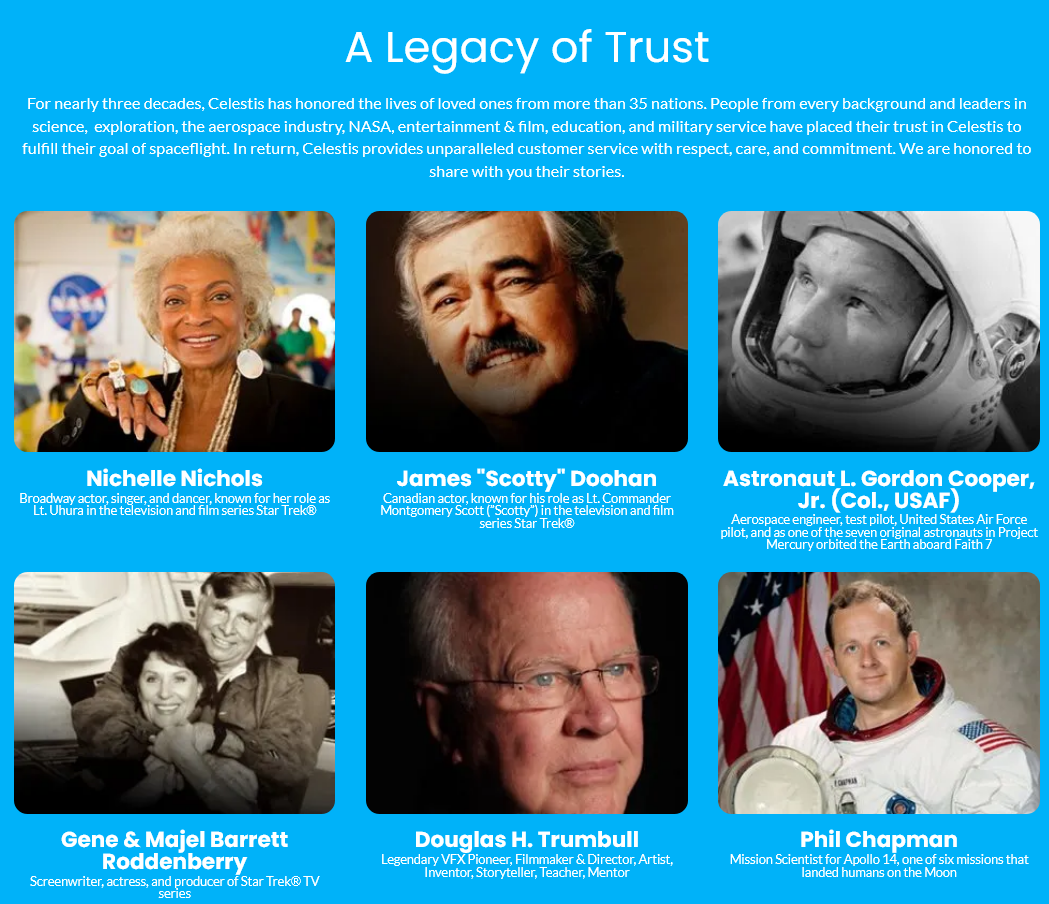 In an official press release announcing Nichols’ addition to the flight, Celestis co-founder and CEO Charles M. Chafer wrote to fans, “We’re very pleased to be fulfilling, with this mission, a promise I made to Majel Barrett Roddenberry in 1997 that one day we would fly her and husband Star Trek creator Gene Roddenberry together on a deep space memorial spaceflight.”

“The mission is named Enterprise in tribute to them – and also fellow mission participant and beloved actor, James ‘Scotty’ Doohan – as well as the many Star Trek fans who are joining them on this, the 20th Celestis Memorial Spaceflight,” he asserted. “We look forward to launching this historic mission on a rocket named Vulcan.”

Interestingly, though Kelley’s ashes were spread across the Pacific Ocean following his death from stomach cancer in 1999, the esteemed fictional doctor will be making the journey courtesy of a lock of his hair saved by his caregiver and close family friend, Kris Smith.

Speaking to TMZ, Smith explained that she donated the lock, from which the actor’s DNA extracted and added to The Enterprise Flight’s onboard cargo, so that Kelley could make a final “journey into interstellar space”.

“I think De [a nickname used to refer to Kelley by close friends] would have loved to ‘go hopping galaxies’ again with cast and crew mates,” she added.

As of writing, The Enterprise Flight does not have a confirmed launch date, but is set to take off sometime later this year.

In the meantime, fans can submit a tribute message to Nichols, the most recent to pass on July 30th, 2022 via the Enterprise Flight’s official website. Once the mission is officially scheduled, submitted messages will be placed aboard the Vulcan rocket and accompany the actress into her next adventure.