In what is most assuredly the opposite outcome to the company and their die-hard loyalists’ expectations, rather than fanfare or praise, audiences have found themselves unimpressed with Disney’s first preview of their live-action The Little Mermaid remake. 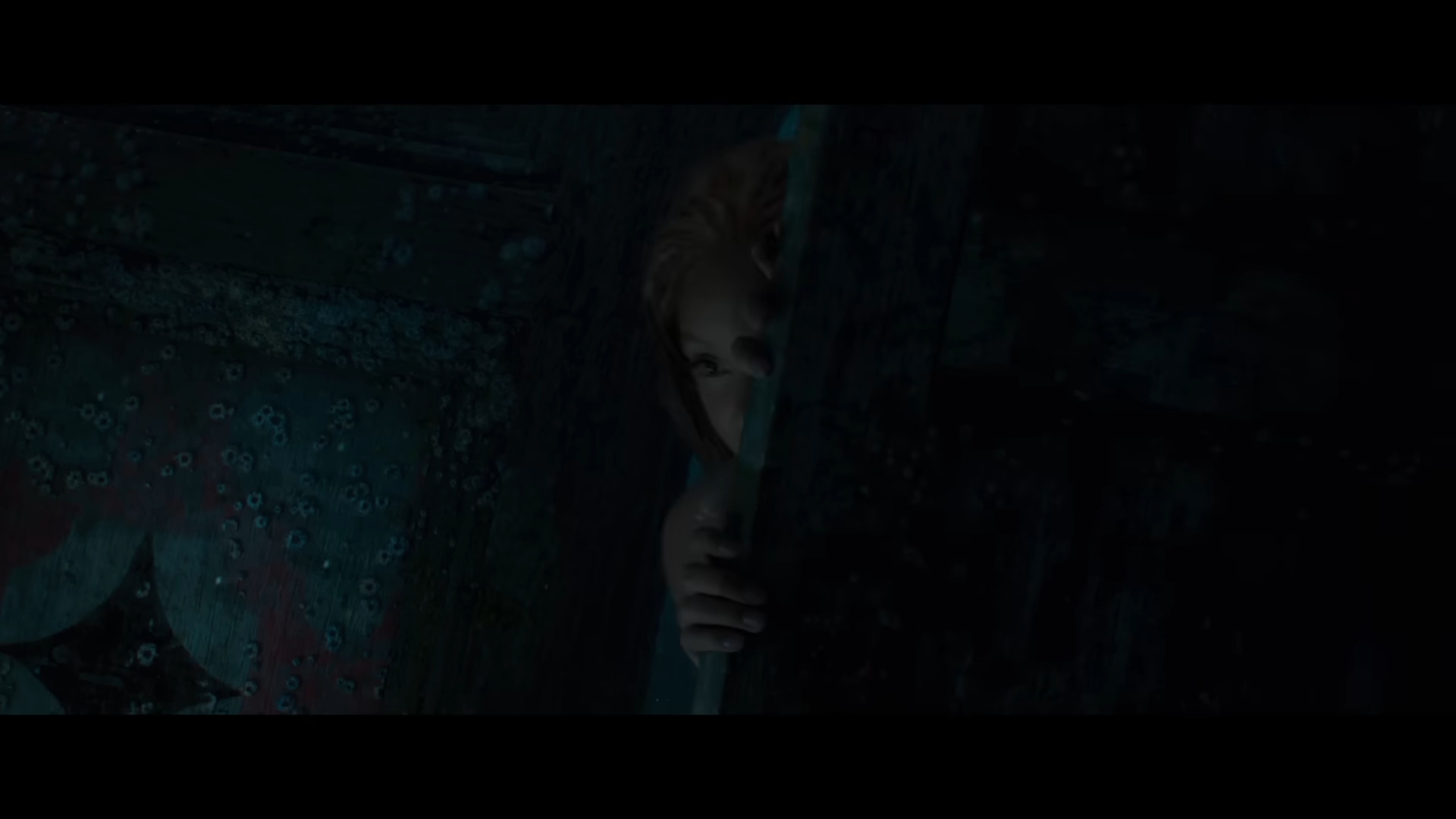 Unveiled on September 9th as part of the 2022 D23 expo’s opening festivities, the film’s first teaser trailer opens with a “swim-over” of Ariel’s ocean grotto – filled with all the visual flair and clarity of an ocean not teeming with wonder and life, but rather currently plagued by a murky oil spill – before ending on an up-close shot of star Halle Bailey as she performs the ending notes of the classic song, “Part of Your World”.

Unfortunately for Disney, rather than excitement, this first look at their latest attempt to rehash the iconic works of those who established the company into the entertainment juggernaut that it is today in service of scoring a quick buck was instead met with widespread indifference and criticism from audiences.

Even with the discourse surrounding Ariel’s race-swapping aside the film found few fans, as while none took issue with Bailey’s singing talents, many found The Little Mermaid itself to be soulless, unnecessary, and simply visually unappealing, especially when compared to a number of previous and upcoming releases. “Bothers me how this doesn’t look underwater at all,” wrote Twitter user @firagawalkwithme in one particularly popular thread discussing the matter. 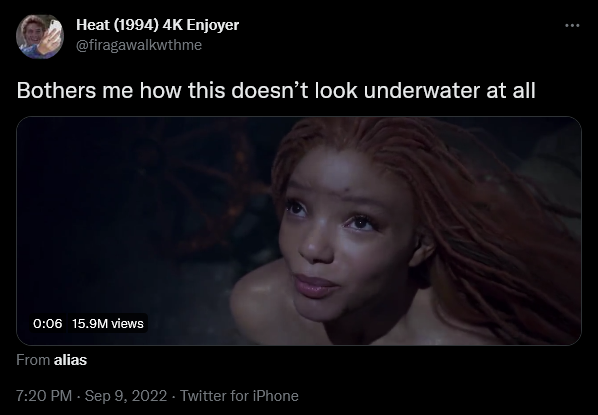 “Like the ocean has a texture and it’s just not [present] here,” they added. “Looks like she’s singing underneath a rooftop infinity pool or something cannot describe it right now but the frame is just empty.”

@ReviewsPossum opined, “That Aquaman movie was garbage, but it at least managed to make it look like they were underwater.” 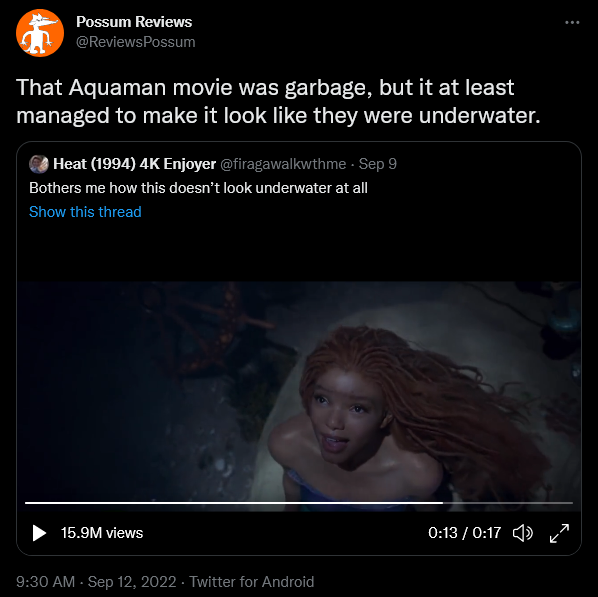 Taking a similar line of criticism, @NicholasJLevi lamented, “I got to say, it truly sucks how people are defending the visuals of The Little Mermaid.”

“Look at underwater sequences from Justice League, Aquaman, Avatar The Way of Water, & Black Panther: Wakanda Forever,” he argued. “They all are underwater & look it while still being colorful & vibrant.” 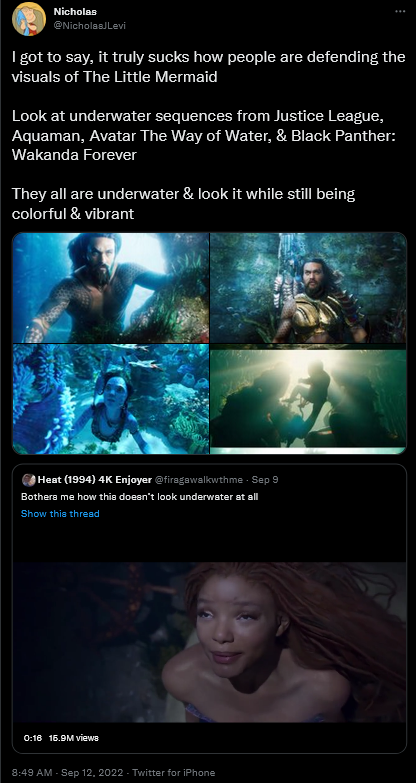 “can we all just acknowledge that this blows and doesn’t exist without spending time finding a reason,” bluntly asked @Jack_S_Wolfman. “Disney is the devil and would sell your bones for horse feed, never support them if you can afford it and never let them know how long your tibia is”. 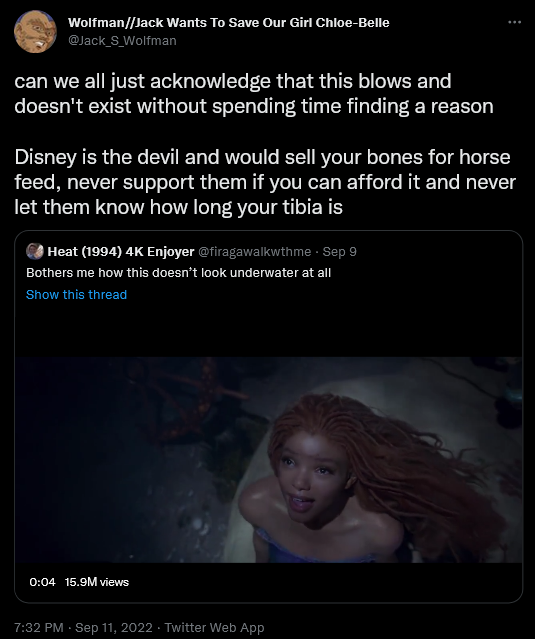 Retweeting @fiagawalkwithme’s original post, @WTMpresents asserted, “Y’all mad at this tweet but they are right. Halle sounds great but is stuck in the grayest, dullest looking ocean I’ve ever seen”. 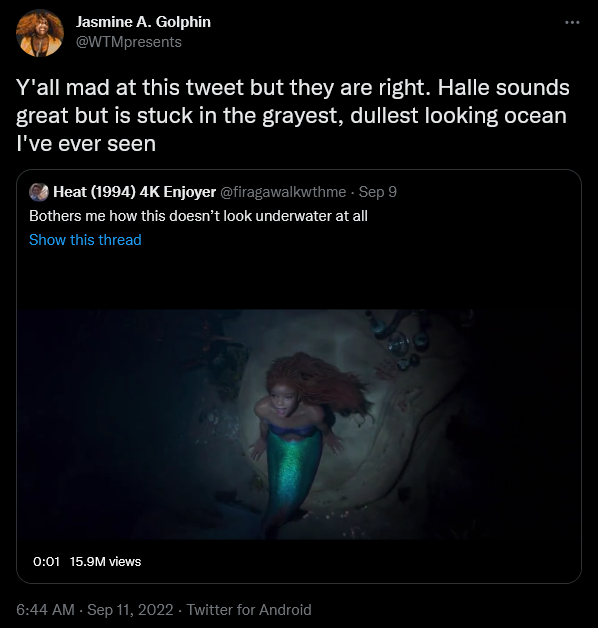 “All these ‘realistic’ remakes are like this for some reason, just dull and lifeless,” she noted. “Why copy the cartoon beat for beat when it comes to framing but just neglect color, contrast, set design, art direction…Like we can ask for much better than another rushed (underpaid) cgi job”

“Over a million bubbles were hand-drawn for the original Little Mermaid,” said Tech Raptor writer @_tanushri . “You might as well be spitting in the face of all those animators with this lifeless CGI”. 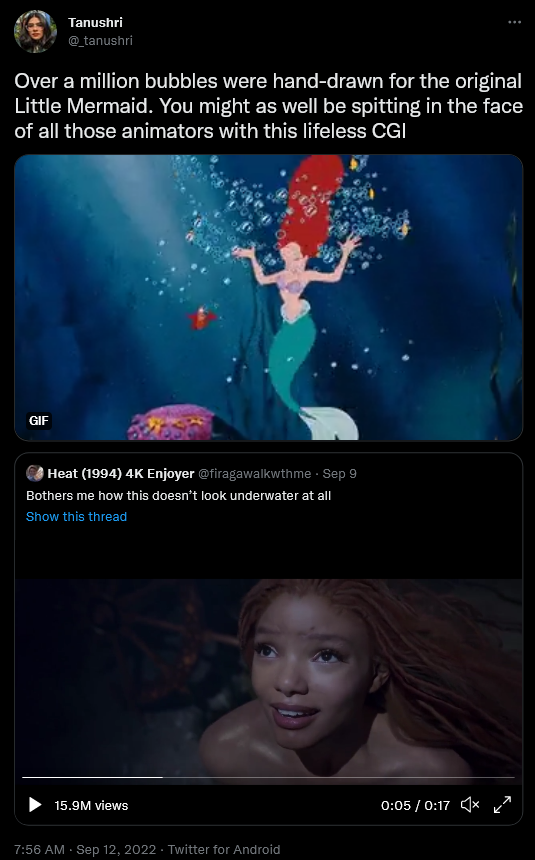 However, perhaps most tellingly of the general fan rejection of Disney’s latest cash grab is the overwhelmingly negative like-to-dislike ratio currently held by the above upload of the teaser trailer on the company’s official YouTube channel.

As accessed via the aptly named third-party browser extension Return YouTube Dislike, at the time of this article’s writing, the video sits at 408,000 ‘likes’ to 1.3 Million ‘dislikes’. 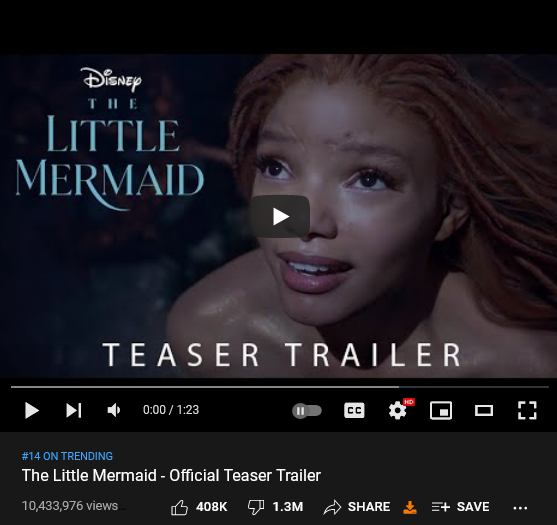