Since it first debuted on HBO, I have been highly critical of the slow pacing and go-nowhere narrative that House of the Dragon was heading into, and I issued stark warnings regarding a much-needed course correction. Obviously, no one responsible for the show’s production was listening, but perhaps they felt the same after watching their first few fully edited episodes. 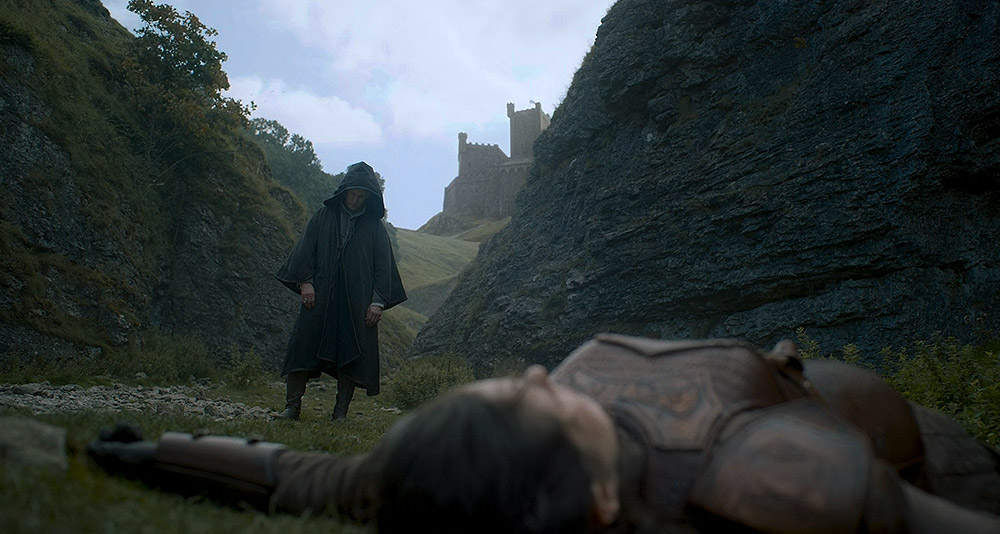 Daemon looks at the crippled body of his estranged wife in House of the Dragon, HBO

RELATED: ‘House Of The Dragon’ Viewership Falls Sharply With Episode 3

The fifth episode has finally exercised the use of its limbs to elbow out of its own stuffy and cramped shell, and the entire show is better for it. Although it still isn’t sailing to the kinds of heights glimpsed in the first season of Game of Thrones, it is starting to broaden its horizons in a pretty big way, which will hopefully impact the second half of the season.

‘We Light the Way’ begins with a brief but welcome return to the Vale of Arryn, with Runestone lingering in the background. There, the stage is set for some heavy-handed political maneuvers when Daemon Targaryen brutally murders his icy wife Lady Rhea Royce, while making it seem like a horse riding accident. 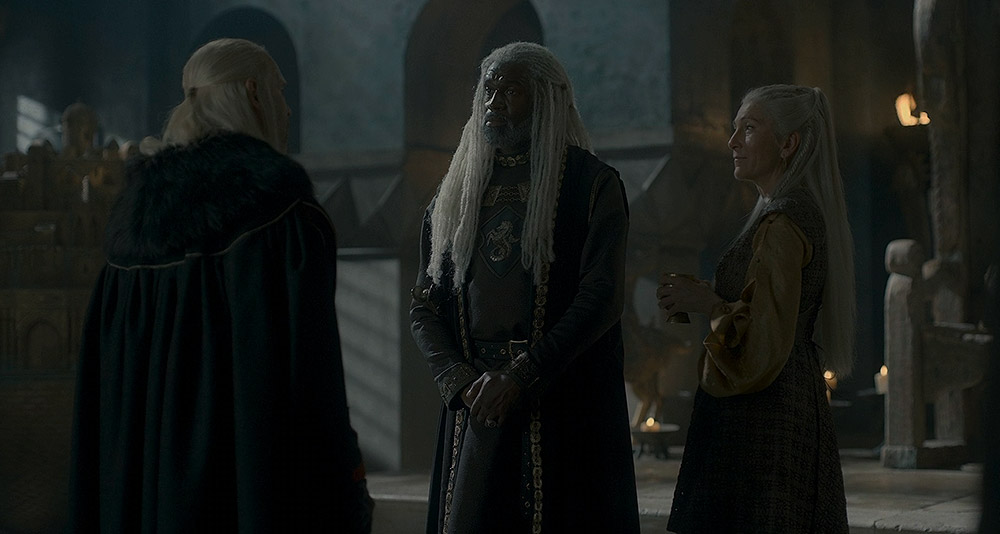 King Viserys meets with Corlys in House of the Dragon, HBO

Meanwhile, King Viserys and Rhaenyra are making moves of their own with a visit to the Driftmark; the purpose being to wed the latter to Corlys Velaryon’s son Laenor. It’s a similar throwback to a previous Game of Thrones plot arc featuring a young lady of royalty marrying a man with homosexual tastes, purely for the political convenience.

All seems well, until Queen Alicent questions Ser Criston about her supposed infidelity with her uncle Daemon. Not realizing to what she’s inferring, Criston spills the beans about his affair with Rhaenyra, to Alicent’s own shock. It’s a lie by omission that she won’t take kindly to as the episodes soldier on. 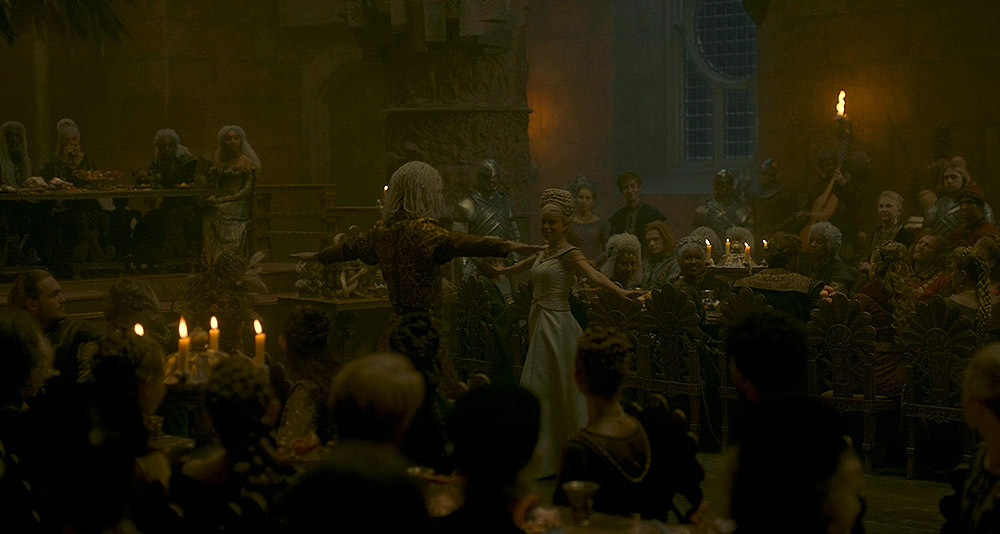 Rhaenyra and Laenor dance in House of the Dragon, HBO

These multiple plot arcs intertwine before culminating in a grand feast and celebration, a prelude to the Targaryen and Velaryon houses finally uniting by bond of blood. Unfortunately, disaster ensues when Laenor’s male lover tries to gain quid pro quo leverage over Ser Criston, who bludgeons him to death on the dance floor in front of all the visiting guests and dignitaries.

House of the Dragon is finally starting to pick up the pace, almost as if it knew that viewers were dangling by a thread. Without some sort of accelerated momentum, the show would have most certainly hemorrhaged fans by the end of the first season, if it hasn’t already. That’s what makes the fifth episode so important to the overall success, by helping to justify the show getting greenlit in the first place. 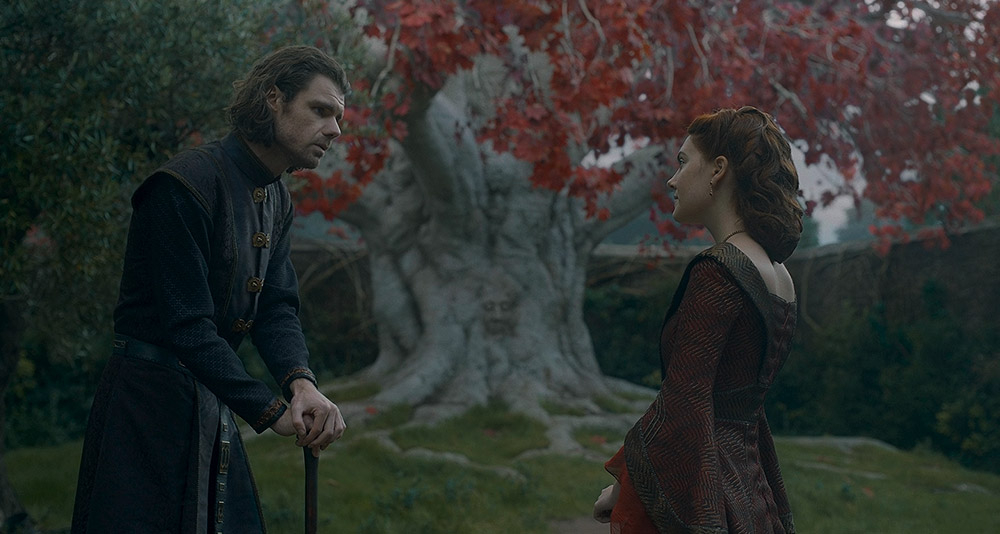 Queen Alicent speaks to Larys Strong in House of the Dragon, HBO

It isn’t perfect, but there’s some genuine political intrigue to be had here, instead of just a bunch of people lamenting their royal responsibilities and bellyaching over the tedium of another feast or hunt. The ingredients that made Game of Thrones so great – from a pinch of Littlefinger, to a bit of Jaime Lannister, and just a dash of Jon Snow – are all here, and they feel more authentic than anything that has been shown since the first episode.

It’s also good to see the characters starting to suffer some real consequences for their decisions. The first half of House of the Dragon felt like a letdown, especially on the back of the supposedly secret meeting between Daemon and Corlys, which ended up going nowhere, fast. Even the controversial fourth episode felt more like internal family squabbling, and little more. 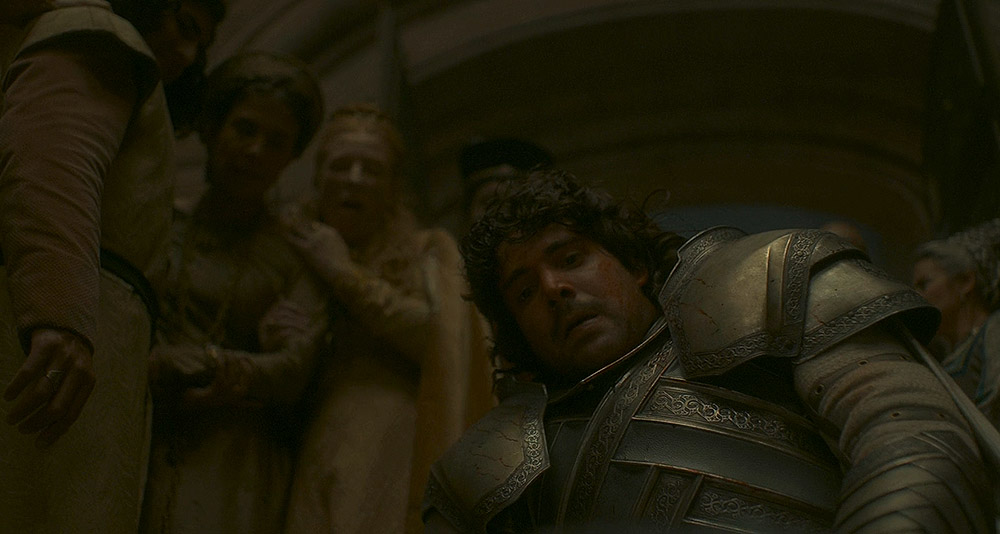 Ser Criston after killing a man in House of the Dragon, HBO

Here, events play out with many different houses and characters who will feel the lingering effects for some time. The psychological breakdown of Ser Criston was especially magnificent, because it symbolizes just how truly corrupt, empty and egotistical the Lords and Ladies he serves truly are. He epitomizes how even the most heroic and honorable man can be dragged into the quagmire of those around him. 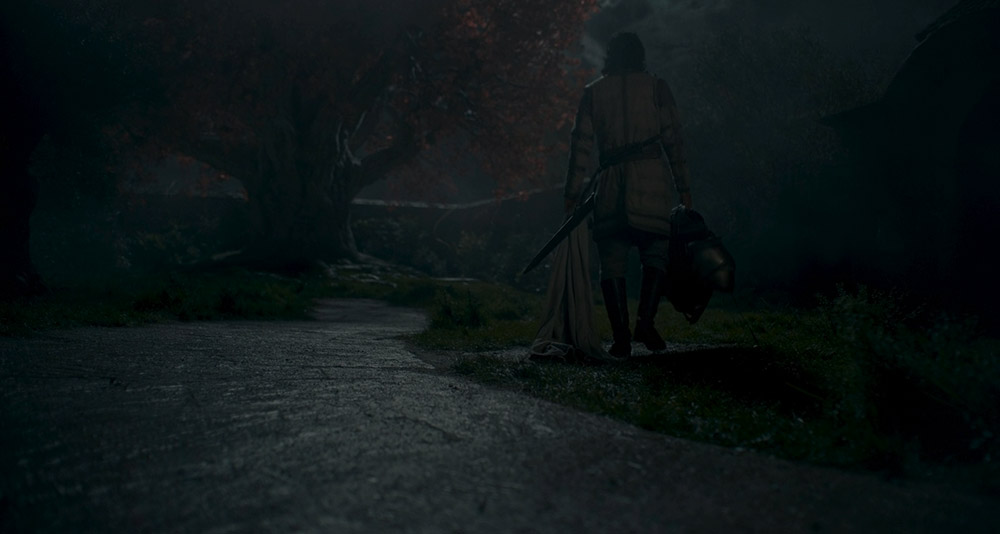 Ser Criston prepares to kill himself in House of the Dragon, HBO

The events that unfold in the last ten minutes of the episode lead into plenty of supposedly assured things, but few of them come to pass. This sudden hijacking of audience expectations is what made Game of Thrones so great, as viewers never really knew what to expect from one moment to the next. Here, this trick is used again, though somewhat in reverse, and to great effect.

I will continue to throw some shade on House of the Dragon for still refusing to broaden its narrative scope. A few shots of familiar locations like the Vale aren’t enough to make the show feel like a sprawling adventure story, try as it might. While it does deserve praise for treading new ground with this episode, there’s still a long way to go. 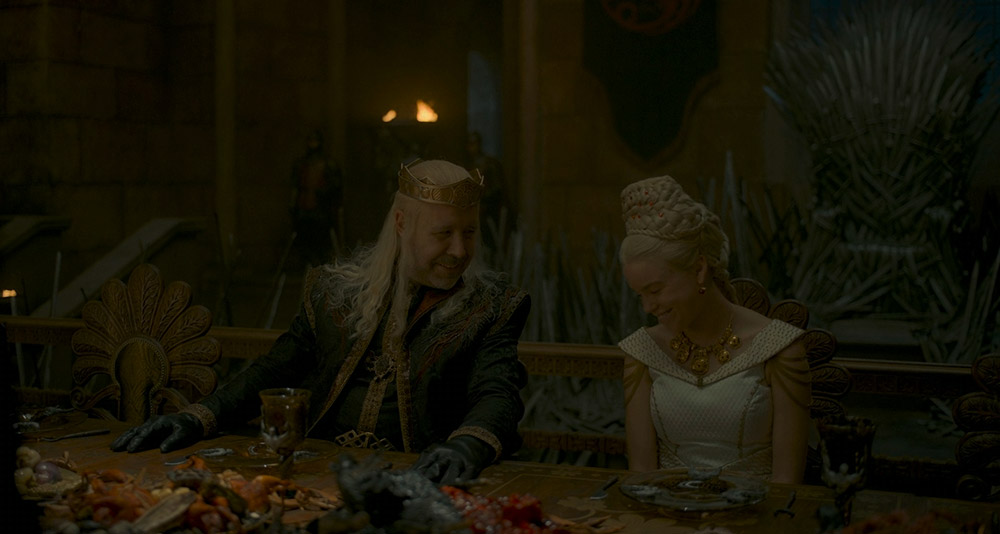 King Viserys and Princess Rhaenyra at her wedding feast in in House of the Dragon, HBO

The pre-wedding festivities are chock full of political intrigue and paper-thin alliances, which is great stuff, but the big shocker at the end should have created more an impact. It’s clear the showrunners were intent on replicating a bit of the Red Wedding, but they failed to follow it up with any actual consequences for the characters affected by it.

For instance, Laenor Velaryon should have been a broken mess of a young man who ran out screaming in anguish and mourning. Instead, he sobs a bit while being wedded to Rhaenyra shortly later. Similarly, Ser Criston bludgeons a fellow to death in a fit of pure rage, and not so much as a single guardsman stops him. Meanwhile, King Viserys looks on with a mixture of confusion and mild annoyance. 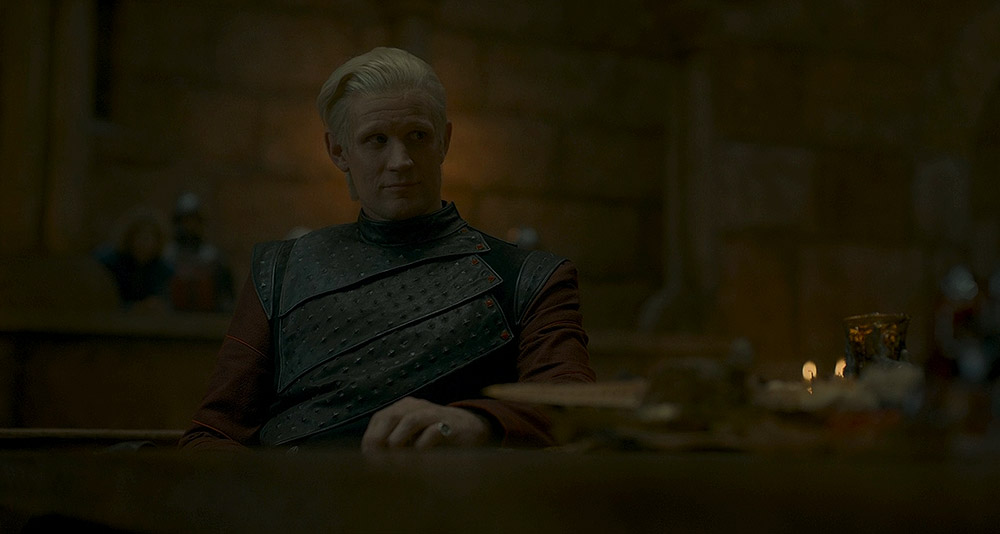 And finally, Daemon Targaryen’s “speak rarely and carry a big stick” attitude is starting to wear thin. Matt Smith is a terrific actor who is wasted on a script with little-to-no-dialogue, and when he does talk, it’s a breath of fresh air. If the showrunners want to establish key iconic characters, it had better start with Daemon, and make him the focal point.

Credit where it’s due – House of the Dragon is finally starting to breathe some actual fire. It may amount to little more than someone holding a lighter to an aerosol can, but it’s something. Logic suggests that a large chunk of the budget for this show was applied to the second half of the season, when things will supposedly get good. 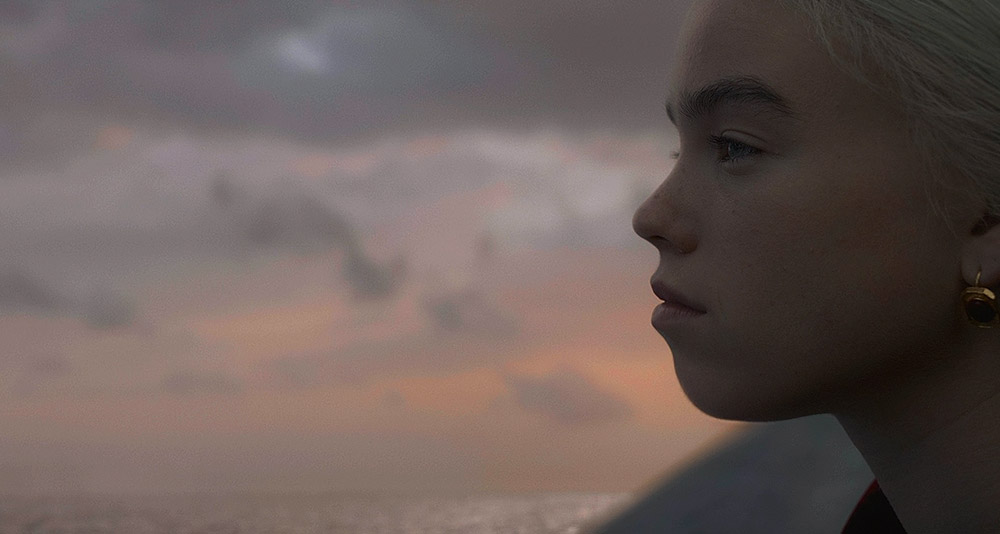 Princess Rhaenyra look out to the sea in House of the Dragon, HBO

For now, it’s another baby step in the right direction, and a sign that the show will survive into a second season. One thing’s for sure – things are definitely changing, and it won’t be long before there’s a major reshuffling of the board, at least if the novel source material is any indication. Then again, the showrunners have ignored Martin’s books before, so let’s see if history repeats.

NEXT: House of the Dragon: ‘King of the Narrow Sea’ (Episode 4) Review